The only sweetener i have been using is Capello Super Sweet so am after peoples views on this v’s other available sweeteners?

@Timwis I use CAP’s for general sweetness and the sugar lips effect, and TPA’s Sweetener for fruits due to it’s 50/50 Suc/EM. I am currently testing TPA’s Super Sweetener now.

Out of interest have you used Clyrosweet ? Only asking because i keep getting recommended to use that sweetener on Ecigssa saying it works better with Desserts than Capello super sweet. But when searching unsuccessfully for it in the UK what i did find was people saying it gave an unpleasant aftertaste so beginning to suspect the recommendation is more about loyalty because it’s made in SA! Will get some TPA Sweetener and wait for your view after testing TFA Super Sweetener!

By the way found your single flavour tests for the Real Flavors super concentrates useful!

Thanks a lot @Timwis, that means a lot.

Wait till i try them first i might come back to you, lol!

Hehe, you never know. It’s always a risk when you test, and put your personal thoughts on things, on line. Thanks for the heads up, as I’d forgotten to link the RFSC tests in my Base Camp thread. Thank you.

SessionDrummer's Reviews All In One (Base Camp) Reviews

Getting some so deleted some off the order you scored low and added some that i wasn’t going to get that you scored highly, a better guide to reviews on vender site, don’t trust them at all just how they are written don’t give much confidence they have a clue about anything!

Well I’d be VERY happy to hear YOUR thoughts on them. My apologies for the 2017 reviews, as I’ve improved my process since then. The v.1 French Toast however, was a game changer for me, in regards to taking the RFSC line seriously.

SD I have also just started using Super Sweetener TPA after many years of Sweetener TPA, and thus far find it to be about 5 times sweeter. So I am able to reduce the amount used to 20% of my old usage of Sweetener TPA.
TPA say that it is Sucralose heavy, however I have not had any off notes, and neither has it changed the profile of my old mixes notably.
I will be interested to hear your take on it too.
As and aside, I have been diagnosed with diabetes, and I have been using my vaping concentrate sweeteners in my tea, and while it is not the same taste as actual sugar, two drops of Super Sweetener sweetens my tea acceptably.

I don’t use sweeteners much. I still have around 9 ml from a 10 ml bottle of Cap SS I bought 18 months ago. Been just using Meringue and Marshmallow to add sweetness. I did however get some WF sweetener last order to try. Not sure how strong it is but will give it a go soon.

When i just pulled the trigger on the Real Flavors the TFA sweeteners were out of stock so i got some Wonder flavors sweetner as well, do like their concentrates! 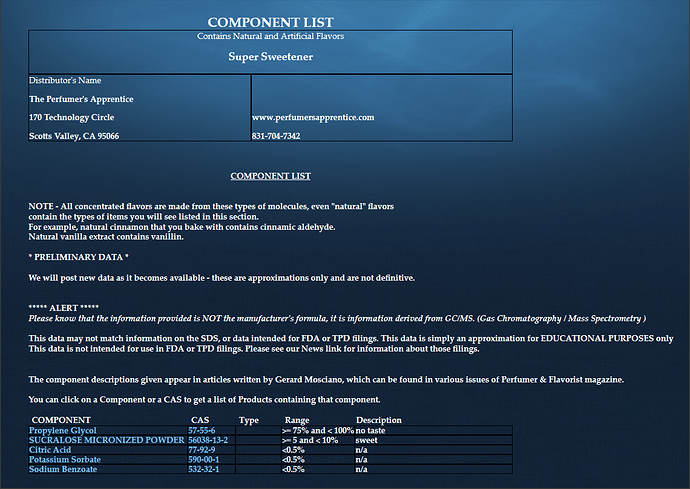 I would have to agree with you SD, I find the concentration and flavour much the same as Cap SS

Some are just past BB date, what are others experiences of flavours out of date? Took the punt because had a similar thing on Vapable with L’oran and One on One flavours but when they turned up all apart from 3 or 4 actually were in date until 2022 despite saying differently on the website!

Some are just past BB date, what are others experiences of flavours out of date?

I don’t think I’ve ever had to toss a flavor due to past dating. Some of mine have faded only slightly in comparison to band new, but it WILL vary heavily from flavor to flavor.

So easily resolved if faded by simply adding more?