Session Drummer’s review of the Fatality RTA by QP Design 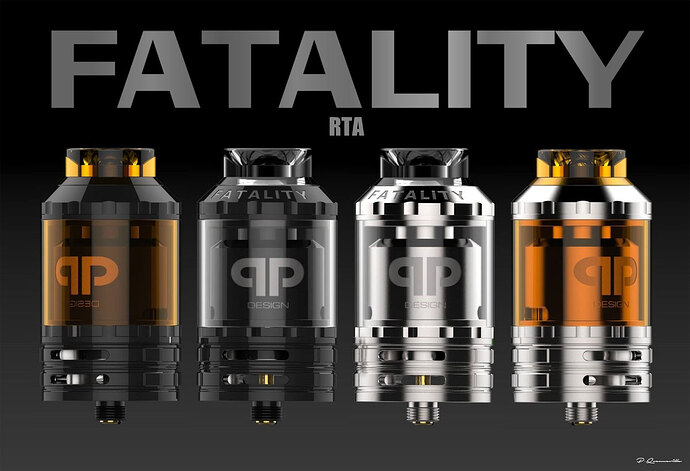 I’m not 100% sure how I found out about the Fatality RTA, but since QP /Design only does limited release runs, this one was hard to find. It’s a biggie, and it’s damned good looking, so let’s see what’s what here. This RTA was NOT provided free of charge to me, by anyone. #IPaidForItMyself Thanks out to the crew at Gas City Vapes for kicking it down to the US post haste.

Also included with each kit:

First things first. I had never heard of QP Designs or the Fatality RTA before, but stumbled across it, and decided it HAD to be had. Problem was, it indeed WAS a limited production run, and it took quite some time to find one.

The packaging was first rate as you would expect at this price point.

All of the included parts, extras and info cards were nicely tucked in.

Starting off the party they threw in tons of o-rings, screws, and a polished 810 Ultem drip tip, and, of course, a blue screwdriver.

It’s safe to say that the Fatality is a nice looking, seriously well thought out, and precisely constructed RTA.

Everything from the machining, the threads, even the drag on the adjustments rings is very well executed.

Starting out with the generous dual filling slots, AND, the “clip top cap” as they call it. The cap is NOT threaded, but you line up two small lines and it comes right off. Goes right back on, twist to lock, and it doesn’t come off unless you take it off.

It has a super expansive build deck which will allow some seriously big coils if needed, and side and bottom airflow (independently adjustable), and large juice wells which proved to make tail tucking extremely easy.

The chimney is very well thought out, with a thin o-ring, threaded top, and dual generous juice flow slots.

Two large juice flow slots allow in plenty of juice, and are adjustable.

I had thought about putting some monster coils in, but decided on a more every day approach with some simple 3mm fused claptons coming in at about .20 ohms.

Trimming the legs was required, but not really an issue. Clearly the deck could hold much larger coils if desired.

Despite having some newer features, they didn’t mess up what works. Make the flavor !!!

Loaded up some KGD cotton, trimmed and fluffed, but didn’t have to thin the tails at all.

It didn’t seem to be overly picky, just trimmed to the bottom of the juice well, and inserted. 5 wick replacements, no leaking, no dry hits, just plain easy.

Saucing of the wicks.

Having had a few bad experiences threading chimneys on on other setups, juiced the wicks up first, but as it turned out, the chimney was too damned easy to fit on, due to the spacious design.

Because it is a 28, it’s going to overhang some of the smaller mods. On my Paranormal there was a small amount of overhang, but it didn’t look terrible at all.

The WhiteRose evened it up nicely.

The is NOTHING worse when you are trying to setup, photograph, coil, wick, and review a setup, than a persistent “helper”. LOTS of little pieces and parts to play with.

After taking a much closer look at, and testing this RTA I was very impressed by the features, workmanship, and operation of it, and I was actually surprised I’d never heard of QP Designs before. Well I have NOW !!!
First things first, the “clip top cap” thing is pretty damned smart. It sounds like you have to push and clip/unclip, but it’s more of a “twist it around, until it de-latches, then you can take it off” kind of a thing, and it works REALLY well. This is not only utilized in the top cap, but also the main body !!! YES, you can shut off the juiceflow, spin it around a line up the (two small lines) points, and pop off your tank COMPLETELY FULL, and access your coils and wicks if needed. WHAT ?? !!! YES, that’s pretty nice, neat, and tricky. It works very well, and both the top cap, and main body have plenty of drag so nothing comes off by itself.

The threads, and o-rings are top notch, all doing their part, with no leaking, nothing loose, and just enough drag to keep everything where you left it. About the only thing I had to get used to was setting each individual air flow rings, but once I got them dialed in, didn’t touch them again, and they stayed right where I left them. Had no dry hits, despite being lazy with the wicks, and didn’t really seem to be particularly finicky about them either. Nothing leaked, and once loaded, worked without issue. For this testing I only used the 4ml glass with the clear drip tip, but may try the Ultem parts later.

FLAVOR ??? Yes, it is one HELL of a flavor chucker (and it can make clouds too). Tried more than a few go to juices to get a good read on it, and it’s probably one of the MOST flavorful tank/RTA’s I own, including the SteamCraves. Is it better than my SC’s ?? Maybe, … just maybe. Very potent flavor, and as expected, opening the bottom air flow ring (bottom air flow) and leaving the top ring set to 1/4-1/2 seemed to provide the bestest flavor. No whistling from the air ports, no spitting, gurgling, etc. I don’t think you can go wrong with this setup, provided you have a big enough mod to sit it on.

Where the hell has QP Design been !!! These guys clearly know what they’re doing, and how to do it. Next gen. feeling to this setup, and it vapes perfectly with hardly an issue. Great flavor gets you hooked, and ease of use, building, and setup, will keep you coming back. After I cleared the learning curve, it just became a smooth as butter flavor chucker. It’s hard to find faults with this setup despite trying to, but as it stands, QP Design has a winner with this one. Update (11-9-18) – Continued non-stop use of this, including multiple re-wicks proves this to be a VERY reliable flavor chucking vapor monster. I have intentionally changed up the wicking in the wells from fairly full, to not as full, and I just doesn’t seem to really matter. No leaking, no dry hitting, it’s just NOT that picky, and I like that. I DID however manged to BREAK the 4ml glass tank, so I am unsure as to the hardness of it. Didn’t drop the tank loaded or assembled, but when washing the parts, and moving to set them down, dropped the 4ml glass onto the counter and it cracked. Didn’t seem like that far of a fall, but I may have hit it JUST right, but not sure, and reporting AS IS. If you’re a similarly clumsy oaf pick up a spare… I didn’t mention on elr but I have had 2 og in transit for a week so i expect them this week or early next week. I also have 1 clone just to compare them. When they all arrive I may put a quick comparison.

When they all arrive I may put a quick comparison.

Well done, you know how to sell a fellow on a new piece of kit. Looks pretty spanky in that gold, would match my Charon Mini rather well…

Just be careful of acidic juices that can eat through it

Just be careful of acidic juices that can eat through it

Yeah, roger that @adary. There’s never a free lunch, and I guess that’s the tick against the Ultem. Sure damn looks good wrapped in gold though.

Thanks @SessionDrummer That really sounds like a step up from the run of the mill, copy everyone else type of stuff coming out.
I’ll have to check them out.

Dammit man! Why you doing this to me? Must… resist… temp…ta…tion…oh never mind, whats the use of struggling? Great review!

Get it so I can live vicariously through you! Hell, I already do! You’ve secured more gear in the last two months than I have in three years.

I am so tempted… I will probably think about it for a few hours… go do some chores to get my mind off it, do some builds while I watch TV tonight, then lay in bed wide awake not being able to fall asleep because I am thinking about it, and then I will order it.

An honest man. Rare in these times. Be sure to show it off here when it arrives!

I just hope you find it in stock. It’s becoming rare

DAMMIT! I blame all of you! Enablers one and all! Ok maybe I am just weak willed and a sucker. At least I won’t have to lay in bed staring at the ceiling tonight while I try to sleep. 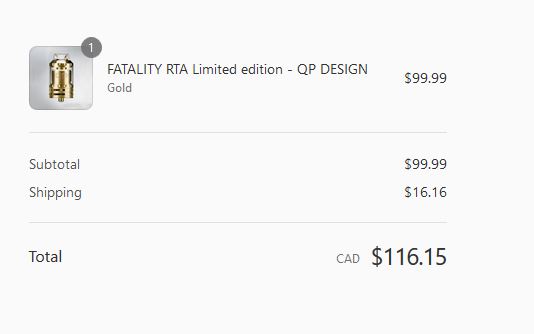 I just hope you find it in stock. It’s becoming rare

@adary you’re right, becoming VERY rare matter of fact. I freaked out and ordered another one (LOL), and a Juggerknot for good measure. Paranoia leads to obsession, which leads to doubt, which leads to panic purchases.

I have two on the way as well, but clones. I will report on their quality once they arrive

I probably should have tried some clones to be honest, but as the supply dwindles, I got nervous. Will you do a photo review or comparison @adary ??

I will do a photo review, but can’t do a comparison since I don’t own the original one