What e-liquid are you vaping today?

I’m missing creamy custard and sweet raspberry. That looks like a really great recipe though! I’ve added the flavors to my wish list at Bull City. I wish they had a button on the wishlist page “F-it! Buy the whole list!”… For our binge shopping spree’s.

I wish they had a button on the wishlist page “F-it! Buy the whole list!”… For our binge shopping spree’s.

The “Wheel of MisFortune” been very very good to me, hehe

Fresh off the shake I’m liking this Lemmy

After giving up on cloning IVG Cinnamon Blaze, I have fiddled a bit with a banana recipe on elr by adding 3 more flavours to the 2 that were in the recipe already. It tastes amazing!

Creamy banana with a hint of Toffee - Illogik

Ehh, maybe just put it aside for now, Andrew, and as time goes by, and you continue to read through the thread’s here, one day you might see what someone write’s about a certain flavor and it could end up being the missing piece to your puzzle!

That does look pretty tasty!

maybe just put it aside for now

I may give it another go at some point but it’s very difficult when i don’t even know what flavours are in it or which brand they are.

It’s also a huge pita mixing juice as i only have a voopoo drag s and a geekvape aegis so it’s a bit of a mess about testing the juice i make with having to clean everything after every juice i try. Yes I’m lazy.

Really though, some of you guys should give that ivg cinnamon blaze a try. It really tastes epic. The cinnamon is quite subtle. My gf couldn’t even taste any cinnamon in it, all she got was spearmint.

I’m happy with this banana toffee though. Got more stuff coming tomorrow to mix up 500ml of it

Honestly, I love the FLV Marshmallow Vanilla- Sweet and thick flavor and mouthfeel with no offnotes. In the way “Franks Red Hot” lovers can say: “I use that S#it on everything”, I think Ive found may latest and greatest marshmallow! Its like “Magic Dust” in my toolkit, like Summer Clouds, Cream Milky Undertones, Saline, Calipitter Chow, Boysenberry, and Cactus (INW) are. Takes things to the next level!

This recipe is private

Gee I must like this nectarine, done quite a few mixes with it this week. This is one of the better pairings with DV Marmalade.

Gee I must like this nectarine, done quite a few mixes with it this week. This is one of the better pairings with DV Marmalade.

Wow, this looks NOT in my typical profile wheelhouse, but I think I need to expand @marsh8. Thank you.

This recipe is private

The PBC ‘does’ work well with the SBC! Thank’s for sharing, @marsh8

but I think I need to expand

Thank you too!!! You helped add few to the basket this week.

No worries! I have plenty on the go since going back to shift work. Wouldn’t want to be that wanker that posted 20 recipes at once. 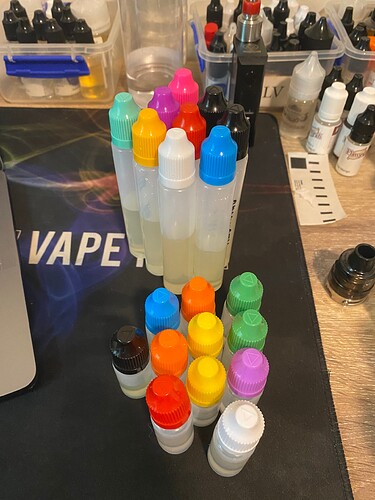 Welcome to the VC @davidleo.

Taste the ultimate sweetness of top shelf candies with the APOCALYPSO ROYAL vape juice. You will feel a royal candy flavour on every puff.

Warm up with my luscious Coconut Rice Pudding. Topped with Mango purée and a dollop of Strawberry syrup, this rice pudding vape is tropical & delicious!

Got everything but that particular sweetener, Rocky! I’ll give it a mix! Thank’s

I was looking at that rice yesterday had it for a while now. I’m one short, same as @whthek.
So I may just get it out tonight to mix as well🤙
But those nectarines are calling again

which should also pair nice with rice