This is an offshoot of a conversation with @Tmease in another thread. I would love for the whole of VC to come together and help create the most badass Orange Creamsicle possible. All input is welcome.

What started this idea was a conversation, and I had made a statement yesterday that, today, I would make 3 iterations. After giving it more thought, I’ve decided to change course a bit. But first, for those who might not know, an Orange Creamsicle is a delicious vanilla ice cream on a sick, wrapped in a layer of orange sherbet. The qualities of this can vary from various makers of the product, although not tremendously. Now one thing to point out for anyone thinking of buying one to try (as if you never have!), there is also what’s known as an Orange Dreamsicle. That one is made from ice milk rather than ice cream. But if that’s your thang, go for it. What should happen with enough involvement is some good recipes, flavor/mixing ideas, and a few do’s and don’ts to appear along the way. After all, orange isn’t the easiest flavor to work with. But, back to the change of course.

Rather than doing 3 mixes today (yep, trying to rush things yet again) I’m going to do just one. It’s not what I consider my first attempt at perfection, but rather just getting a lay of the land. My comments in the recipe speak to mixing methodology today.

WORK IN PROGRESS FOR PUBLIC COLLABORATION. NOT A FINISHED MIX.

INITIAL PLAN FOR 60ML IS TO DIVIDE THE FIRST FINISHED MIX INTO SMALLER PARTS IF FLAVORS NEED TO BE AMPLIFIED.

So, are you in? I hope so, because this one could be a lot of fun. Where am I right at this moment? First stage of homogenization mix just went into the USC to get the bubbles out. Next step…adding the orange. But that’s going to have to be changed on my end. I only THOUGHT I had the MF flavor. Turns out, I don’t. Here’s what I do have -

Great idea, will be watching where this one goes

Hehehe go put an order in at MF

Orange Citrus Flavorah .5 - .7 (to start low) you can push it a little to 1 ish but 1 is quite forward and will probably make your creams less effective but it does work at 1 as a candy type orange. It has quite a good mouthfeel for a fruit & not harsh at all but I can see it being used as a candy orange when you play with it around 1 Semi-sweet sliced orange like a navel in the higher ranges perfect for a candy feel.

Other considerations would be

Candy Roll Flavorah .3 - .6
Fairly indistinct flavour more of an additive - higher use will get dry but this too can be a useful addition if you are going for a candy powder or to get that sorbet tang.

Maybe a little dose of Malic Acid and or Citric acid

I have never had the exact Orange Creamsicle but from your sherbert description (reading sorbet since sherbet is like pixie stick candy here in AU) I know what I would use but I also know you won’t have it. (Parma Violet from DV)

So I would say
VIC LB - 3.5
FVIC Hangsen - .5
Orange Citrus Flavorah .5 - .7 (work up if required)
that did say + but the forum converted it so plus what ever else you think of lol

The sherbet on a Creamsicle is not tart in the least. It’s a creamy, smooth orange flavor with no acidity at all. Or if any, only very slight. Among the orange flavors I have, the TPA one is the most obvious winner for me. And yes, I know it fades fairly dramatically. But it also is easier to find a useage percent that will bring the orange flavor without the acid tones. Yeah, I’m in a pickle I think. Looking like it will end up being a combination of orange flavors used very low so as to achieve the orange taste sans the citric acid.

THOUGHT I had the MF flavor

damn you just cost me 20$ lmao … It doesnt take much to give me an excuse to buy a MF flave . It does make me feel better to blame someone though

Oooooooo just what I like to hear mmmm mmmm ok enough with the moans right !! its 7am and im going back to sleep for 2 hrs ttyl

@SthrnMixer call me crazy many have but I would also add in .25-.5 flv sweet coconut - it just makes any cream thicker and fuller damn I love that flavour

Oh I found the bottle. It’s the unintended consequences of failing to keep inventory. There might be 2-3 drops worth in the bottom. Hardly enough to toy with. Sorry about that. 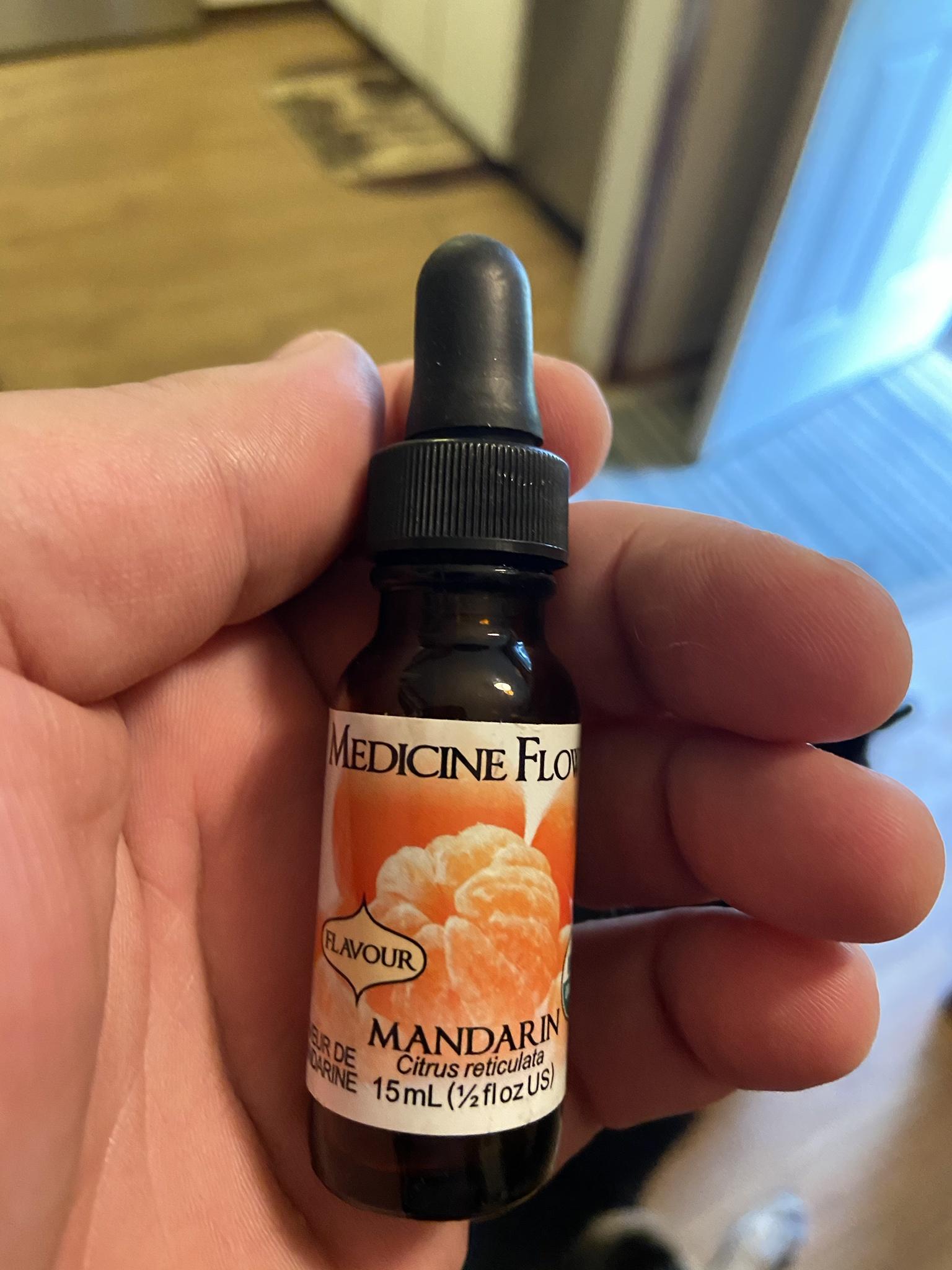 Hehehe go put an order in at MF

I agree with woftam lol, and i think it could almost stand on its own…

Idk about candy roll as i don’t have it, but i use OoO powdered sugar for that sherbet/sorbet gritty kind of thing. I’m really excited about this, it’s a profile i tried when i was really new to mixing and ruined it lol i never got around to trying it again.

call me crazy many have but I would also add in .25-.5 flv sweet coconut - it just makes any cream thicker and fuller damn I love that flavour

Agreed. It’s a great flavor and does do wonders used very scantly. I had also mulled over the idea of some Oba Oba at low %. Baby steps.

Yeah, I need to get a couple MF flavors restocked. I’m desperately low on Honeydew too. Shameful.

@woftam Oh no! You have to buy an Orange Creamsicle. Replication requirement. enjoy and savor the luxuriousness! Engineers sometimes think fabricators can do things that real world physics wont allow. j/s since we are lacking a flavor or 2 anyway…they must have those bars of deliciousness in EU somewhere. Id never be able to ship one efficiently. I adore the idea of LB VIC and Hangsen FVIC- a go to for me with a touch of TFA Vanilla Swirl . Ive had great success with 3% LB, .75 HS and 1.75% TFA. I cant claim credit (https://www.reddit.com/r/DIY_eJuice/comments/b3fefh/its_trinity_time_the_perfect_vanilla_ice_cream/) TFA Orange Creamsicle coming out of the mix, was my thoughts as well(its collecting dust on my shelf)
Im going to add the Orange Citrus (FLV) to my BCF wish list now. and Candy Roll. Parma Violet suggestion by its description reminds me of FA Summer Clouds- which I use in peach, apple, orange mixes, if I see your point, to better authenticate the fruit notes and make the orange more luxurious. Malic acid for pop. ok but if it makes tart… not so much. candy shell-maybe no-but I did think about VT avocado cream…

Oh no! You have to buy an Orange Creamsicle

There are a few ice creams on a stick here that are a similar profile but no way to know if it even resembles what you guys have.

Ok, TEST#1 had to be dumped. My Orange Cream (TPA) is rather old - maybe 6 years old or so. I found after mixing it that the flavor bottle had some kind of solid material floating around. Not sure what that is, but not taking chances with is so I dumped it.

On to the second attempt. After mixing the first batch, I realized the Madagascar Vanilla Classic is far too rich for what I’m attempting here. Should have thought about that initially, as my normal use of VIC from LB is 3-4% in mixes, but I knew super rich ice cream heavy on vanilla is not the goal here. So, I eliminated Madagascar and replaced it with Vanilla Swirl. Even after the homogenization of the creams I could tell by the smell it would be much more suitable.

So the addition of the Orange I used a combination of Shisha Orange (INW) and Sweet Tangerine (CAP), 0.1 and 0.2% respectively. It’s degassing on the USC now, but the smell is off the chain. Subtle and soft orange. I’ll taste it later today and report back. Total 2 minutes of homogenizer on the creams, 60 secs on the oranges.

Going to see what I have in the cave @SthrnMixer.

I’ll have more soon for this thread…but wanted to add one note…orange creamsicle cap has kinda been my base lately for this profile.

As for the mix…yes I like the idea of mixing 2-3% Vic lb and 0.5% hs. Tangerine flv would also be a great place to start as well.

I haven’t even tried one of these in a while, but found an old one in my juice calculator xml. 3 and 3 approach…

You ever mixed that? Reason I ask, it seems it would be very orange forward. In fact, looks like it would be orange with a hint of cream when in fact the Creamsicle is a fairly even balance between ice cream and a soft orange flavor. That is until you lick off all the sherbet