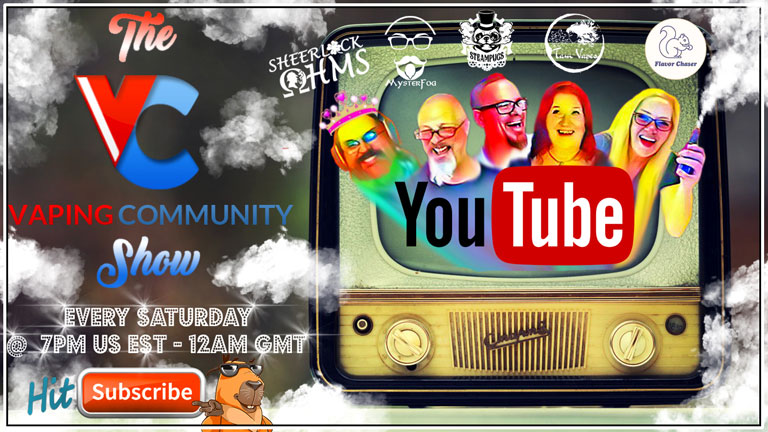 SO!..A little something we have in the pipeline to run alongside the Forum which will be coming very very soon, and that’s our very own little YouTube show.

We’re thinking of maybe a general Vape show to discuss everything to do with this wonderful little community of ours, It will more than likely be the same line up as the OGA mixing with flavors channel, So Myself @Steampugs , @woftam, @FlavorChaser, @TamVapes, @Sheerluck_Ohms with occasional special guests etc, and it will be aired on a Saturday @ 7pm US EST/ Midnight GMT for probably about an hour and a half…everything there is pretty much dialed in.

Seeing as the show is mainly going to be geared towards this forum and the people there in - I’d like to hear from you all about what kinds of things you, as the Forums members, would like to see on it, suggestions, ideas etc etc

Disclaimer:- If your suggestion is good we may well steal it and take all the credit for it, and if you come up with a terrible idea the chances are that you will be ridiculed to within an inch of your life and more than likely kicked off the forum…so…no pressure

…OBVIOUSLY I’m kidding…about some of that.

Let me see the fruits of your creative juices flow forth…ew.

OBVIOUSLY I’m kidding…about some of that.

It’s the remaining 16% that’s giving me the willies

New gear show off. Not like reviews. Just a quick visual of the actual item with some initial thoughts. Or even just show some shit on the web. Go over the UI of various devices to show what people who never read the instructions might not know. Live mixing and testing users recipes. Also, do some flavor pairs. Like mix 2 (user submitted) random flavors - vape it - give impressions.

Yeah thought about this too, seeing as all but one of the panel have a GC this should be pretty easy to accomplish

Also, do some flavor pairs. Like mix 2 (user submitted) random flavors - vape it - give impressions

And that’s got @Sheerluck_Ohms written aaaaaall over it

Which vape gear impressed you the most, tanks, mods, cotton, coils etc and a little bit about why, maybe you’ve found the perfect setup that you’d like to share.

A group finding on how coils affect flavour, who uses what and at what power.

All of you have years of experience with all sorts of gear so that knowledge would be invaluable.

Kevin, seriously … #yawn. My, not an idea, would have been that everyone on the show had to have a shot anytime anyone said vape, or mod for the first hour. Pugs said it was up to 90 minutes, but by then folks be getting bored.

So at the hour mark, you up the ante by also having an article of clothing removed from the offender.

A segment where Paul tries on the latest Victoria Secret fashions would be fun too.

Which vape gear impressed you the most, tanks, mods, cotton, coils etc and a little bit about why, maybe you’ve found the perfect setup that you’d like to share.

Like this idea, we could do a device of the week kinda thing, special mentions

You ain’t ready for that jelly fella

Some shows do a remix of a commercial juice, (not interested),
How bout a weekly segment / showcase of a VC member / recipe, maybe do a mix / breakdown / thoughts of the recipe (not the member

)
Sort of showcase of what we have to offer

Also a segment for beginners with an easy “VC recipe”, maybe 4-5 flavors Max. would be of interest to those just starting out

love it, thanks for your input

It might be the only way to raise the bar for your Brand. A tall order in a competitive field. I’d love to see you guys for real (video), and I want to be encouraging, but I’ve seen some bad content in this niche (Vaper livechat). Coming up with weekly fresh topics and content could dominate your Creative bandwidth. Talking about it here is smart.

On the technical side… it’s 2021. Folks need solid Mics and Cams and broadband. An agreed platform anyone (guests?) can easily sign in on (Google Chat/Meeting?) with good admin controls. I know there are bunches more, but I don’t know any details. Low quality group chats (audio/video) is a buzzkill and folks have become jaded and expect a certain level of Production value even for YT homebrew stuff.

I mean, Viewers don’t expect you to look Hollywood, but good lighting (5600K “Daylight”) and …shampoo, can go along way. Sitting in the dark with only the light from your laptop screen is distracting, and I see alot of that on YT group chats. I think they’re trying for like a “Vapers After Dark” …wait that might be a good idea

Jeeez. I’m hoping you guys are up to date on your YT competition so you can keep it original. I don’t exactly remember if there ever was some “Vapers After Dark” I watched, but you’d wanna try to make sure any idea was not someone else’s beforehand. The reason I think you peeps can do this is the Creativity you have already become Internet Famous for …heh Maybe a screen behind Paul to play GIFs

While it’s easy to believe you can just wing it, no biggie, never forget the permanence of your content and it’s effect on The Brand. Folks will forgive a few quirky first releases, but building a popular and growing YouTube channel is a major accomplishment …over an unforgiving re-occurring schedule of time. Best advice? Be yourselves and keep it fun! If you’re successful, you’ll be portraying that “Character” a lot …and it def needs to stay fun.

Man…I could just read you forever Mr Darc, excellent input as usual sir.
I know what you’re saying, there is a lot of ‘homebrew’ vape shows out there and some are tedious to watch at times, but on the flip side of that, some of the ones we’re currently ‘involved’ with are more about catering to a familiar crowd or regulars who appear to follow a certain bunch of people who do these shows, and it’s nice, it’s almost like going to the pub and seeing your mates.
We’re not looking at breaking any new ground here particularly, we are well aware of our own limitations, but there will, I hope, be some kind of format and a little bit of OBS trickery thrown in.
Most of the content should be pulled from the Forum, such as Topic of the week, Top Recipes, etc etc…with a bit of general banter on top, I mean we have the forum for an ever evolving, always giving plethora of fresh content…so that’s kinda unique to us, I just hope the members here will come and join the chat and get involved…it’s gonna be a bit janky at first probs, but we’ll see where it goes

Can’t believe that after 15 posts nobody mentioned boobs, moobs & general nudity. Have we gone that high brow

Things like juice of the week, mod/attie of the week (or whatever the cycle time of shows is) sound good. Latest vape news/advocacy news maybe.

Doesn’t everybody do that now?? Ooops

Mixing Competitions amongst the panel members. Everyone has their own styles etc it would be good to show that to new mixers instead of a group of people always agreeing which happens on some shows…

Have the chat pick a profile
Panel has a certain time limit to make something , pick three or four judges that can mix the recipe and have them judged the following show …or something like that …Each Panel member can explain why they chose what they did …