Thunderhead Creations seem to continuously release quality products with most of their popular products carrying the Tauren name. They are best known though for DL atomizers and mechanical devices so a MTL RTA is a bit off tangent compared to their usual releases. The Tauren MTL RTA offers a unique airflow, easy to build raised GTA style single coil build deck, outstanding build quality and a short thread convenient top-fill design. Being as i said a bit off tangent for Thunderhead Creations will it fall flat or leave me Thunderstruck!!! 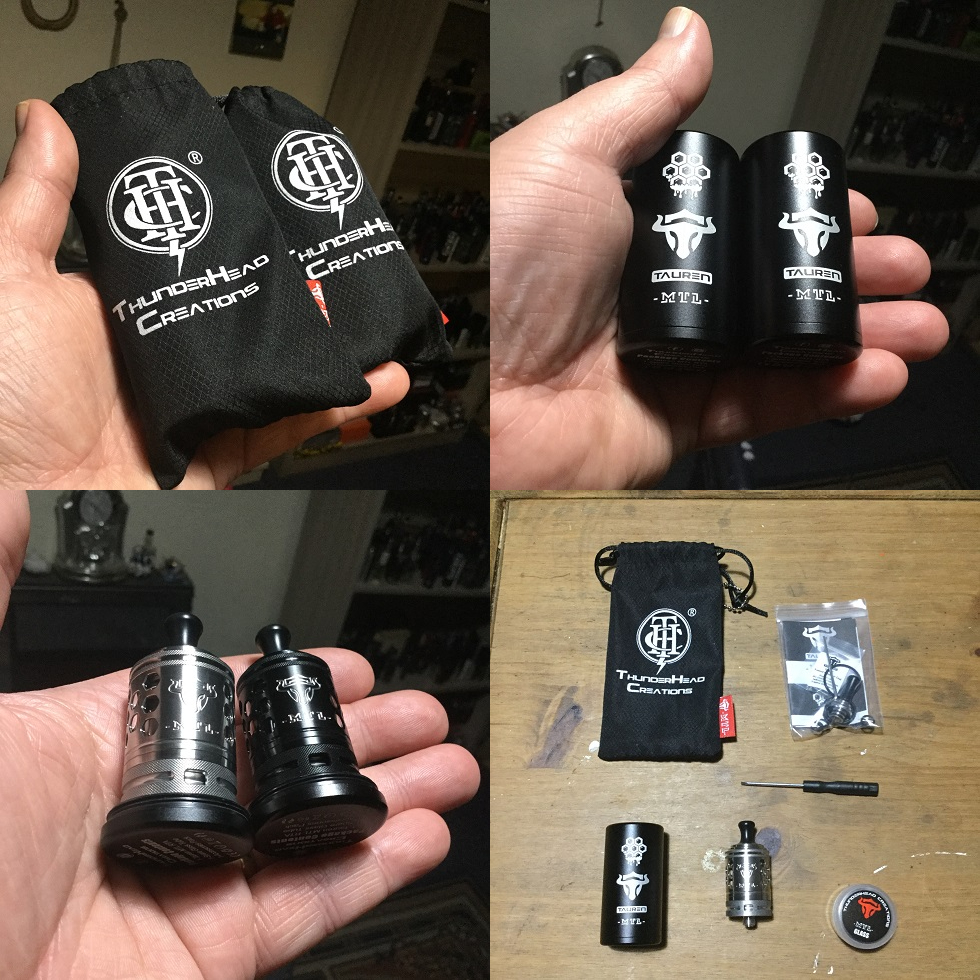 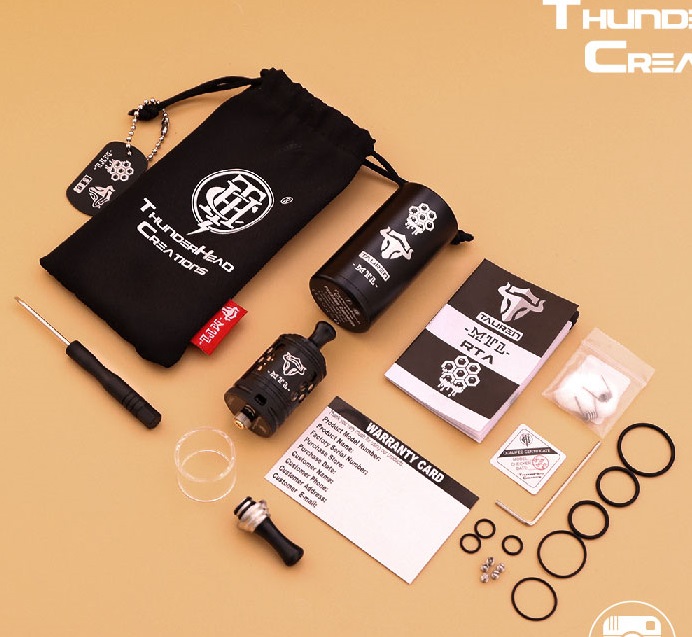 On the bottom we have the airflow control ring which with a rectangular cut-out for airflow control, central groove and heavy knurling above and below the groove reminds me of a belt with the airflow opening being the buckle. The top-cap has the same central groove with knurling for grip both above and below but is much narrower before stepping to a 510 drip-tip fitment. This stepping is even more emphasised when installing the included long drip tip which has a stepped Stainless Steel base section, the pre-installed 510 is a nipple style MTL.

The glass has a Stainless Steel sleeve for protection which people will tend to love or hate, i love it with the nicely engraved Tauren logo on the front and honeycomb cut-out design which also allows the viewing of your e-liquid but of course some prefer a more plain look! Moving to the base we have etched branding and safety marks and the Gold plated 510 protrudes enough to be fine on a mechanical device.

The Tauren MTL RTA follows the recent trend of quite large MTL RTA’s and with the long drip tip installed looks quite a beast, the build quality, machining, threading and tolerances are spot on, it’s a solid, well made RTA! 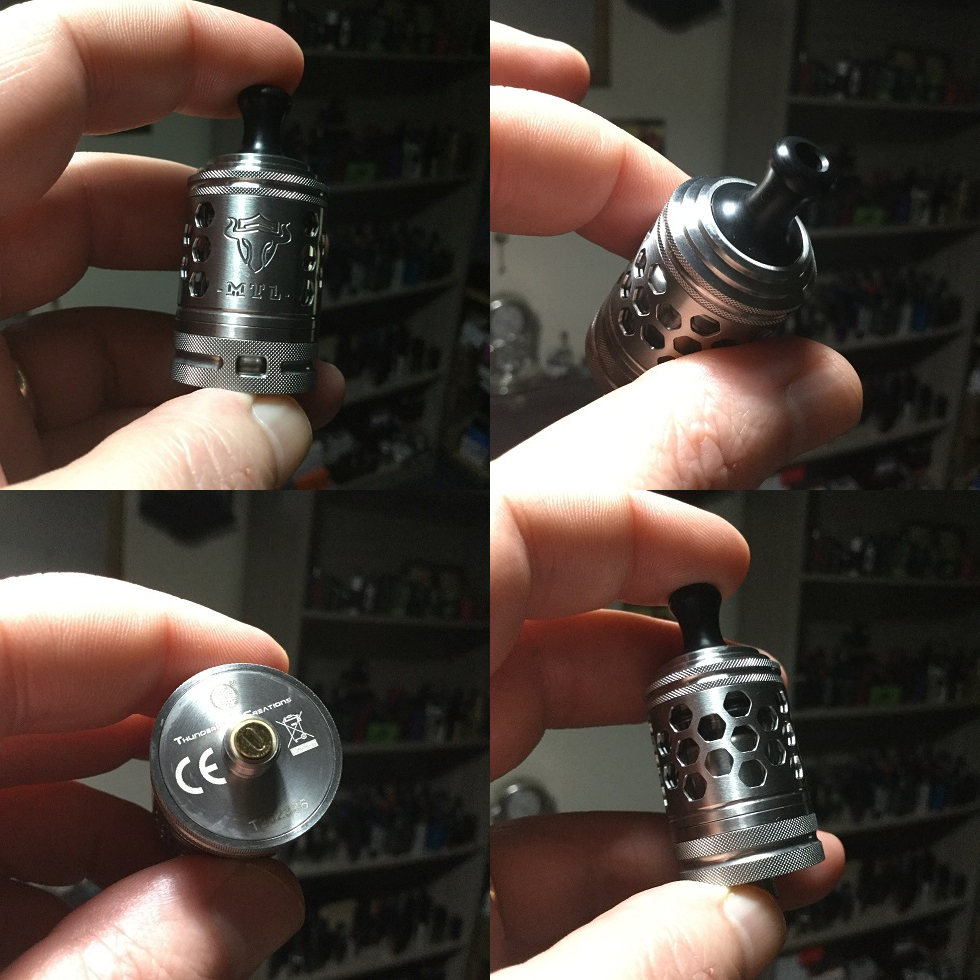 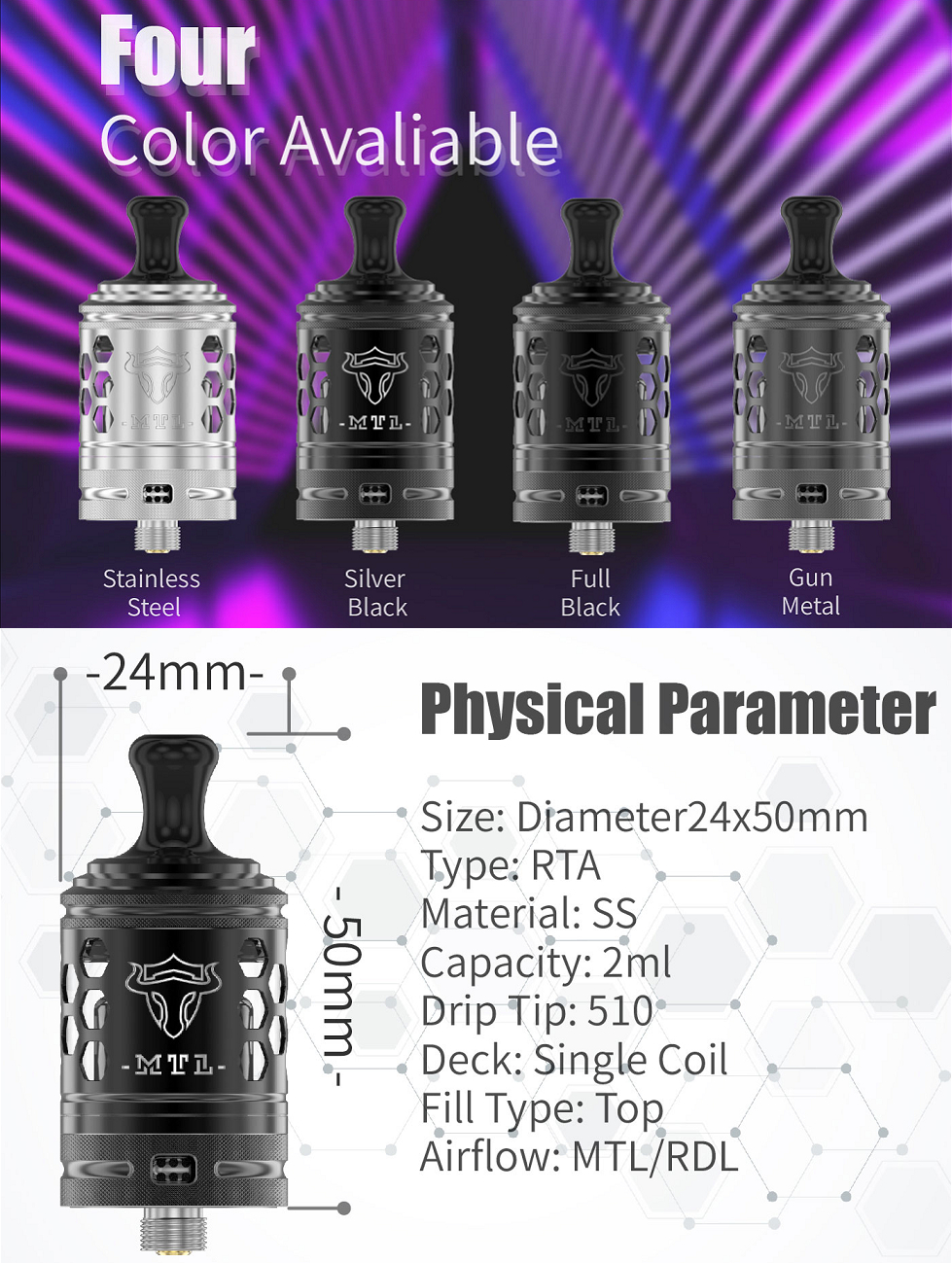 Answer, loads; very impressed! As well as the Tauren MTL RTA with pre-installed nipple style drip-tip you also receive a longer drip-tip and spare glass. In the pouch is also a slotted quality screwdriver and a bag of accessories.

The bag contains all the paperwork and a smaller bag containing cotton and 2 spaced MTL fused claptons with full specs (30ga*2+38ga Ni80 2.5mmID 0.6ohm). Also in the bag is an Allen wrench, both hex and slotted spare grub screws and spare O-rings. 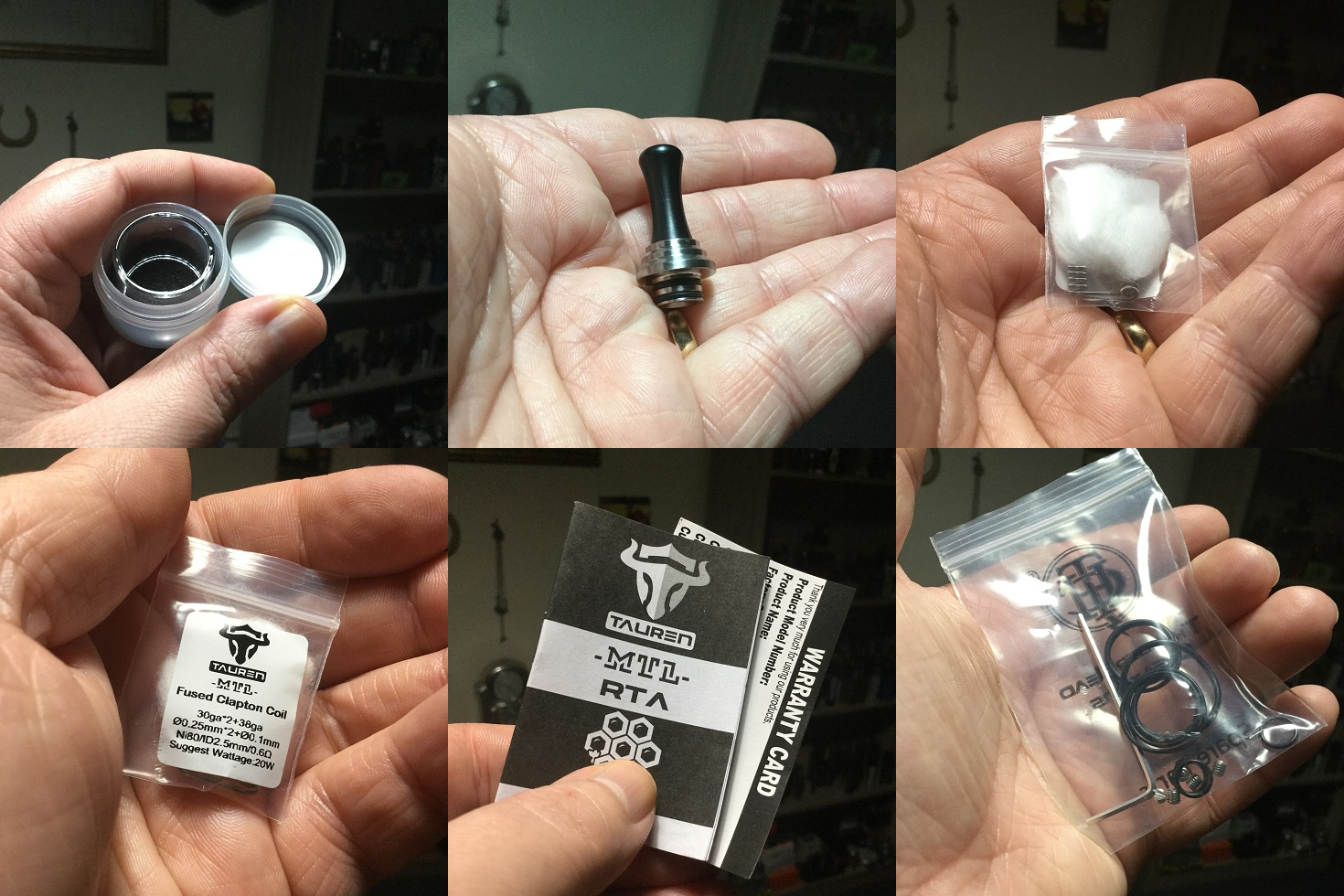 The Tauren MTL RTA can be stripped down into it’s various parts and reassembled very easily but here comes one of only 2 cons i have for this and it’s the sleeve is fixed and can’t be moved, the glass can be moved easy enough by just using the slotted screwdriver through one of the top honeycomb cut-outs and pushing down and it press fits back into place no hassles but far from ideal for cleaning purposes as much as anything else! 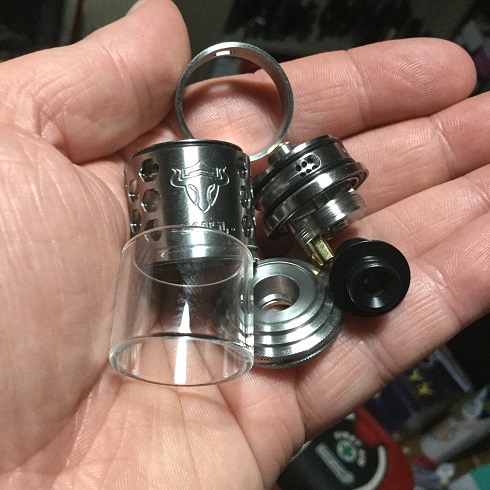 Up top the pre-installed Delrin drip tip can be replaced with the two piece longer drip tip which has a 510 fitting stepped Stainless Steel base section and then a long Delrin MTL style top section which screws into the Stainless Steel base, of course if you prefer you can use one of your own which is always a great option to have. 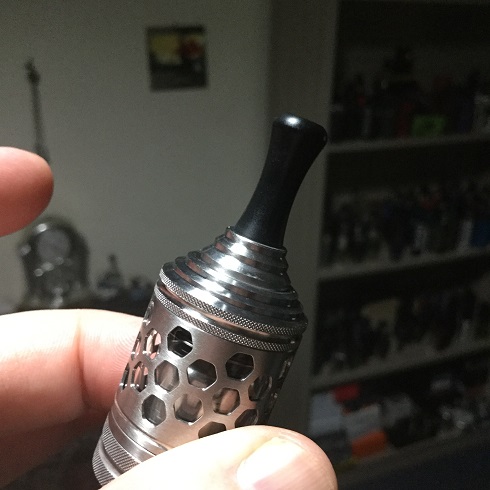 I prefer bayonet fitting top-caps as threaded can take a good few turns to remove but here we have a short threaded top-cap which is less than 2 full turns to remove or secure, the smoothness of the threading just oozes quality! Once off we have deep sitting large fill ports, absolutely no issues at all. The fill plate is attached to the sleeve that protects the glass as already described. Removing the base section again shows off the superb threading and also reveals a very clean looking raised GTA style build deck with showerhead bottom airflow! 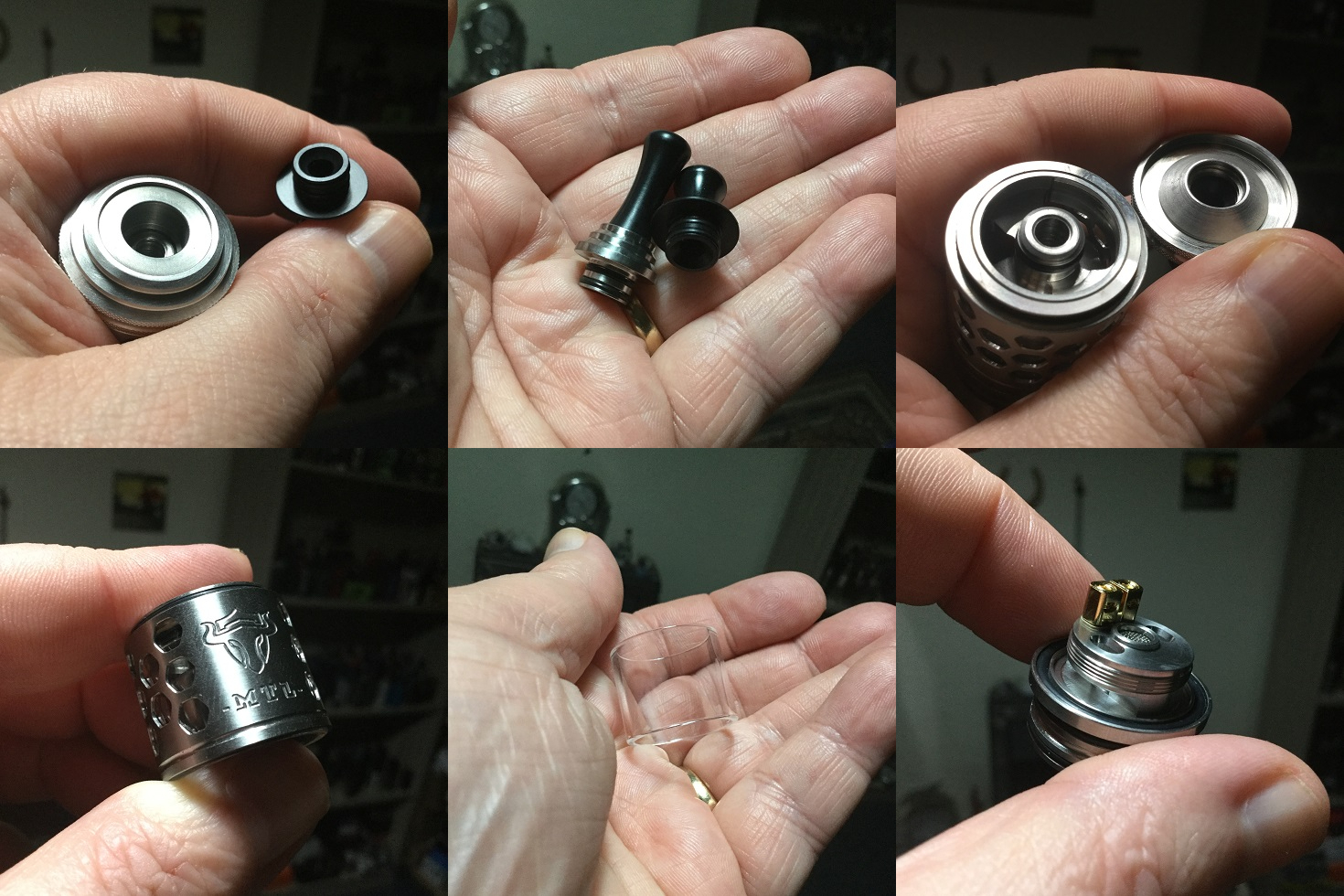 The Tauren MTL RTA has a unique airflow system which isn’t going to be that easy to describe but luckily enough there are pictures from their website i have included that are self explanatory so gets me out of jail on this one but i will do my best!

The air enters via 6 small airflow holes on the side of the base and is directed up a curved inlet channel before entering the deck through a showerhead style outlet directly below where your coil will be installed. This circular airflow showerhead outlet consists of a total of 61 0.35mm honeycomb airflow holes which appear to the naked eye as almost small pin holes! 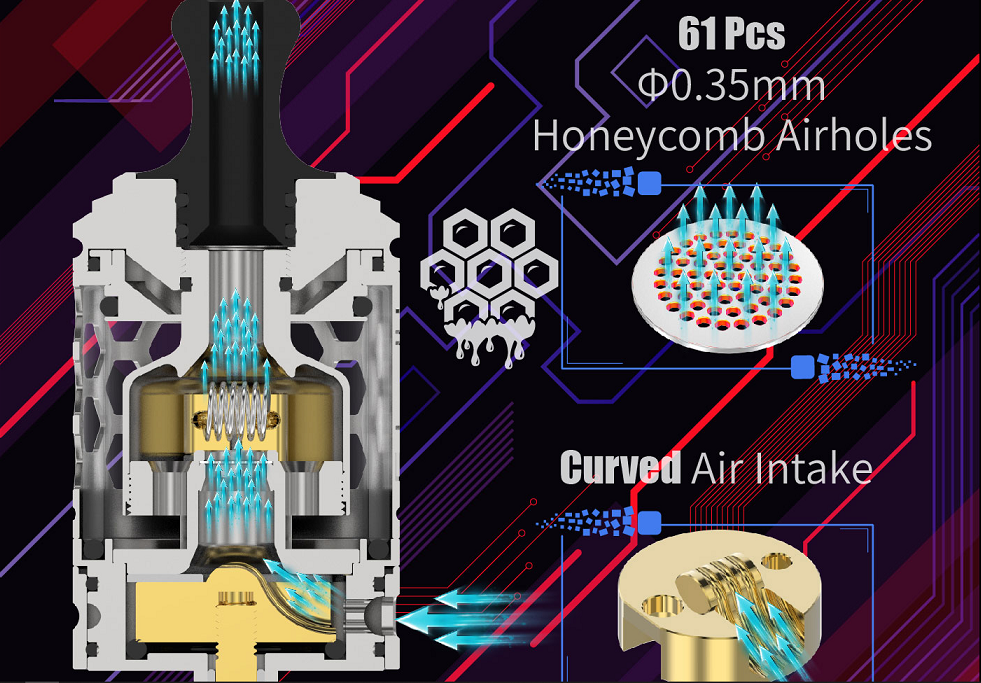 As well as the 2 rows of three airflow holes on the side of the base these holes are at the end of a recessed channel that travels around almost the entire perimeter of the base very gradually becoming narrower the further away from the airflow holes you get! 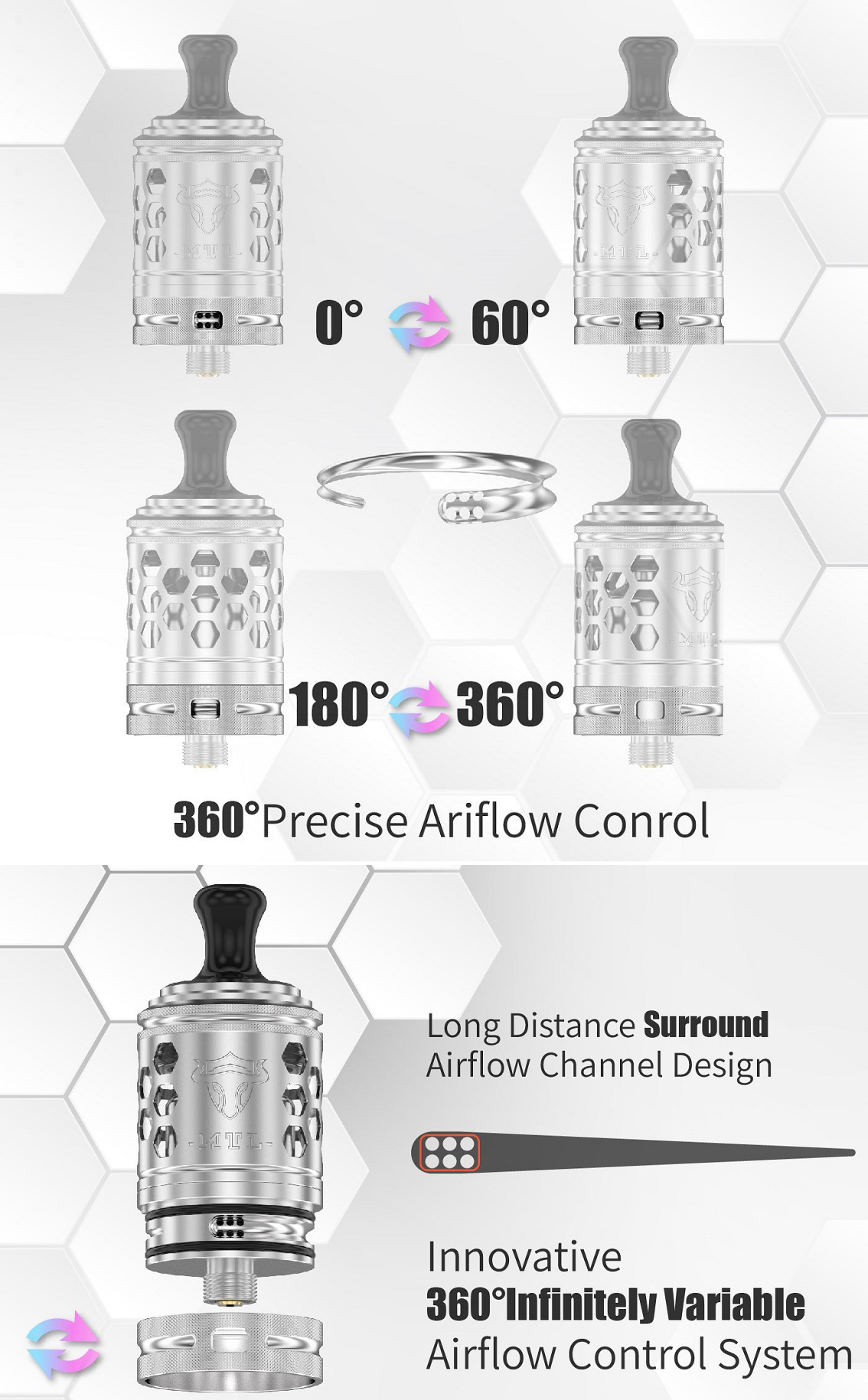 The rectangular cut-out on the airflow control ring can be lined up with the 6 airflow holes for full airflow or it can be turned to have 4 or 2 holes wide open! This is where this design gets clever as the airflow positions i have described so far are for your RDL and loose MTL draws. You can carry on turning the rectangular slot on the AFC but now you are feeding the airflow holes via the recessed channel which the further away from the airflow holes you get the narrower the channel gets so the tighter the draw! Full marks for innovation! As the chamber along with airflow are two factors influencing flavour i need to also mention we have quite a domed interior to the chamber which is smoothly machined! 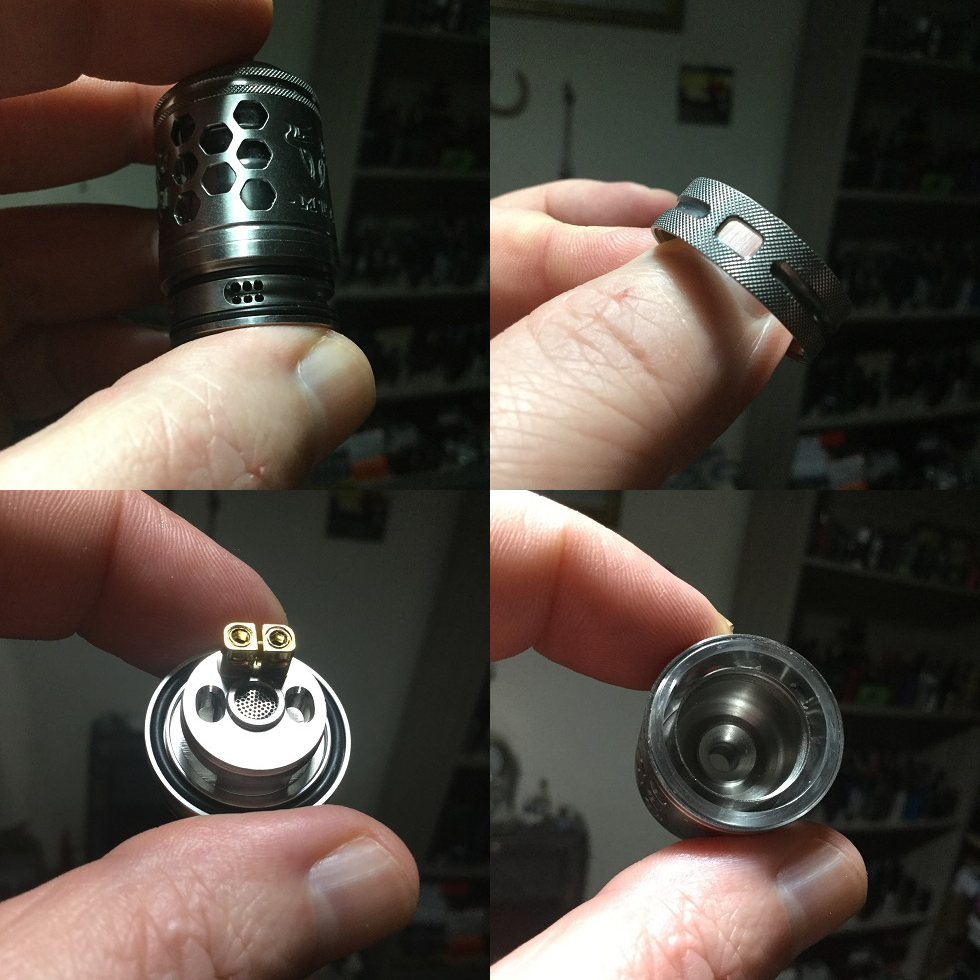 The Tauren MTL RTA has such a clean looking deck with both deep wicking channels and side threading which means the build area will sit in the top half of the chamber making it quite reduced. It’s a raised GTA style deck and although this is a 24mm RTA the build deck itself is 15.5mm in diameter which is more in line with a 22mm RTA deck. We have side by side posts with your leads just getting fastened down from above so it allows for a very easy straightforward build! 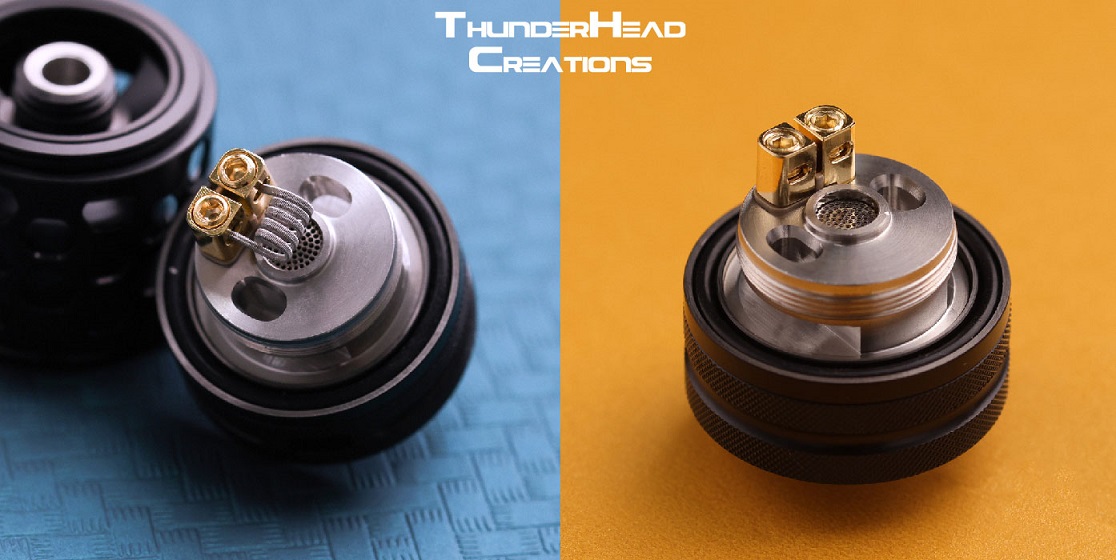 As mentioned we have side by side posts and hex screws that get fastened from above although the spares include both more hex screws but also some slot style if you prefer, personally hex are my favourite.

Just slot your leads through the terminals and while holding the coil over the showerhead airflow outlet tighten your leads down. Then just use a coiling rod or fit for purpose tool to position your coil at the correct height and snip your access leads. I always after snipping the leads just recheck the leads are fastened tight and although i used one of the included spaced coils i sill gave it a few low wattage pulses to burn off any residue. 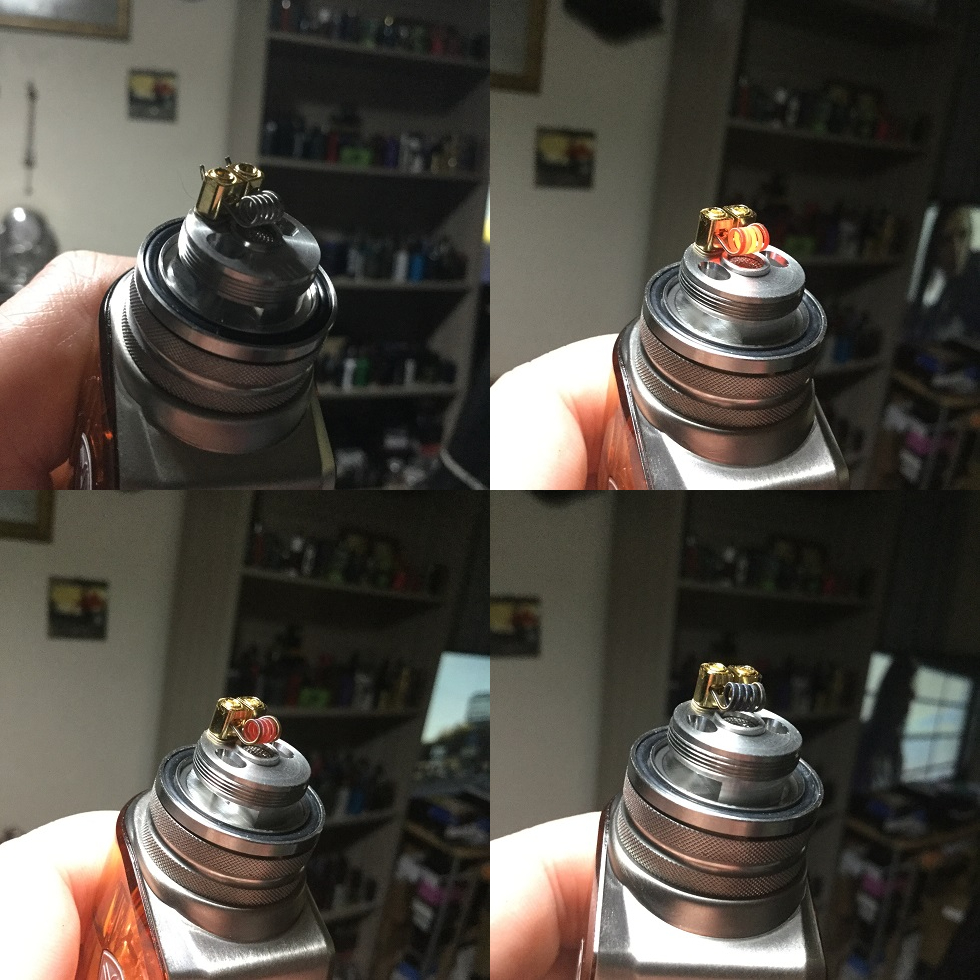 Wicking is straightforward although if you look at my build when i chain vaped it did start drying out and was on the cusp of a burnt hit so i re-wicked doing everything the same but just cut the cotton ends at an angle to reduce the cotton in the channels to give more efficient wicking and that worked a treat!

So just cut your cotton long enough to feed the wicking ports and with you cotton ends unlike in the photos cut at an angle just tuck the cotton into the channels, prime and give it a few pulses to admire your work!!! very easy build indeed! 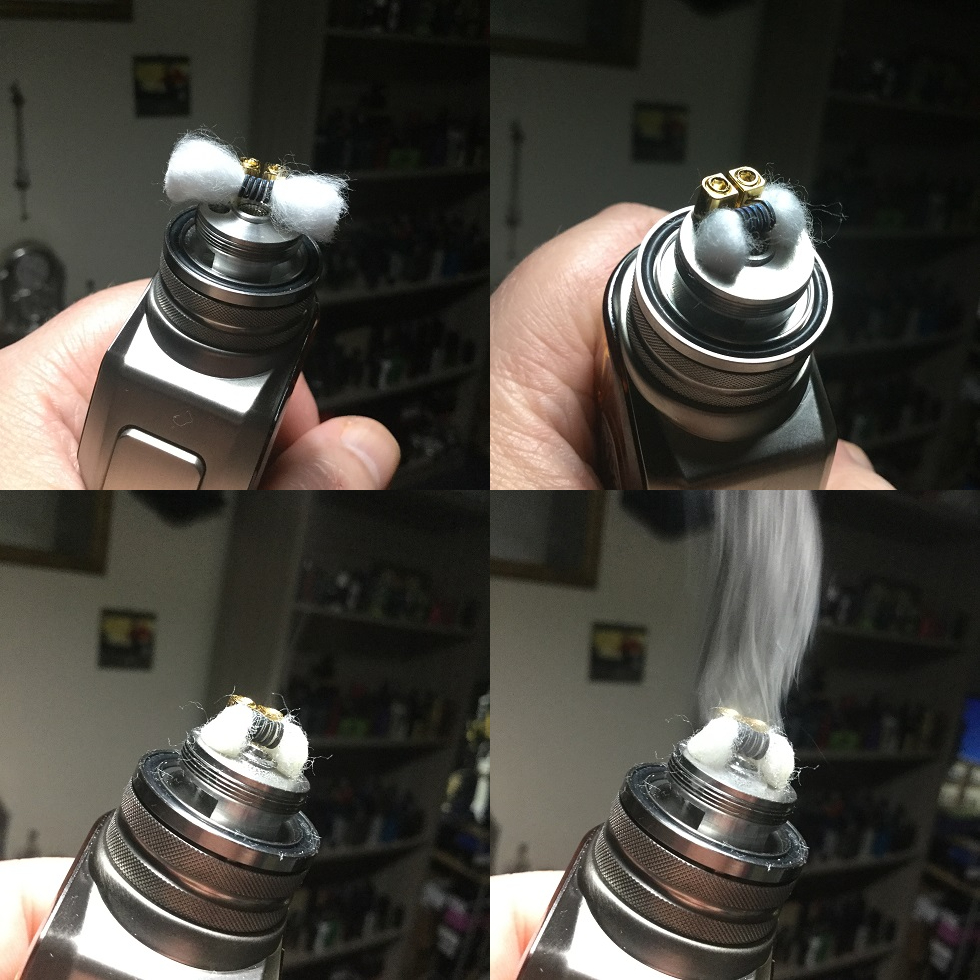 Thunderhead Creations also sent me a box of the coils which consists of 5 small jars with 2 coils in each and from looking at pictures they do a number of different types of coils at varying resistances packaged the same way. They also sent a tin of cotton which i have already used with another RTA when it needed a re-wick and was very impressed, virtually zero break-in time and clean flavour! 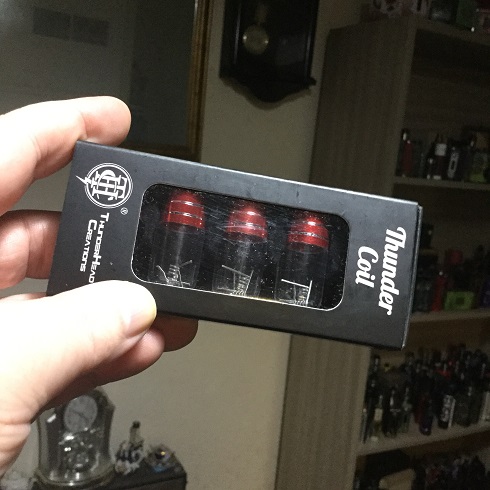 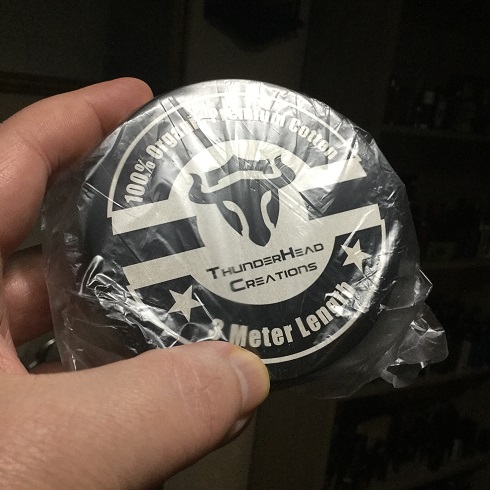 Simply blown away!!! that would sum it up but let’s get into the detail. Apart from being unbelievably impressed with the Tauren MTL RTA like anything it does have a couple of cons for me both to do with the Stainless Steel sleeve. First it’s fixed in position so how you need to use something like a slotted screwdriver to remove the glass isn’t ideal and again not ideal for cleaning purposes. The other con for me is a trade off i am willing to have and that’s that although we have honeycomb cut-outs for viewing your e-liquid, visibility isn’t that great so you do need to train your eye and again when filling it’s a little tricky to see your level but that’s it! Pros all the way! I suppose only being 2ml capacity could be seen as a con but it makes sense, it’s a MTL RTA and the TPD regulations is 2ml so it saves messing around with bung reducing inserts plus as mentioned this is large for a MTL RTA and although i like it i wouldn’t want it any bigger.

Despite the cons surrounding the sleeve i for one love the look and also it needs pointing out just how good the machining, threading and tolerances are, it’s really top quality. The top-cap comes off almost as quick as a bayonet fitting and the silky smooth threading oozes class. The clean looking deck is machined perfectly and with the side by side posts with large terminals for a MTL offering it’s such an easy build.

The standout though is the innovative airflow design, just the angled inlet and showerhead outlet consisting of 61 0.35mm honeycomb holes would of been a great design guaranteeing smoothness but then we have that innovative recessed channel feeding the airflow inlet holes that is used for your MTL draws.

Innovation is one thing but when it delivers like this the jury goes out on “why has nobody thought of this before”! with the AFC rectangular cut-out lined up with the six holes it gives a smooth RDL draw and then you can close down to 4 or 2 holes for a very loose and loose MTL. Once you start using the channel for airflow you can dial in the exact draw you are after right up to very tight and i can honestly say i haven’t used any airflow design that allows for as much precision as this allows for, it works absolutely great and is smooth across the board!

Of course for most vapers having a super smooth, quiet airflow that offers this much precision and draw options will be poor consolation if it doesn’t deliver on flavour! Absolutely no need to worry apart from the Nevermore that just edges it for flavour this is as good as any MTL RTA i have used, the flavour is absolutely cracking!!! Winner all the way! 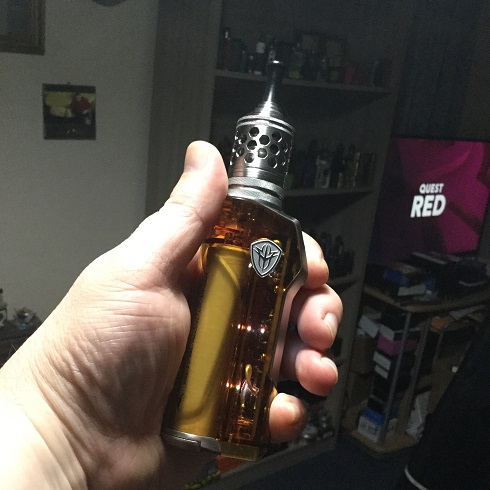 I would once again like to thank Thunderhead Creations for supplying the Tauren MTL RTA for the purpose of this review, thanks for reading and stay safe!

This one’s a bit special, will hit the hype train and deservedly so!!!

Great review Tim. I take it that you sorta liked this one

Very good review brother. The sleeve issue is a wee bit of a bummer, but it seems that the only issue(s) you have.