Plenty of chargers out in the market and Xtar was generous enough to send me out 2 of there new line, the VC2S 2 battery charger and the D4 4 battery charger. You can find out more at there website: http://www.xtar.cc/ 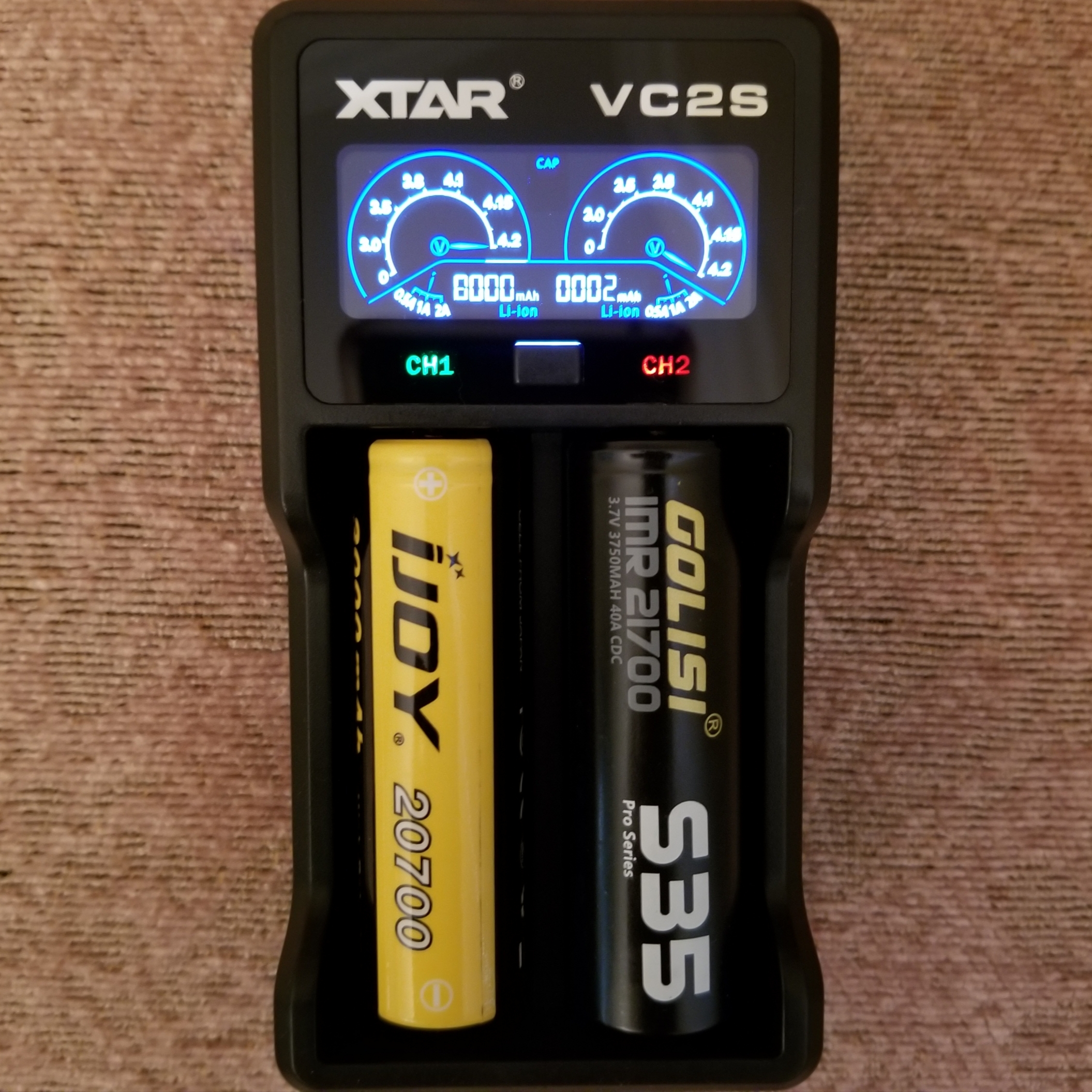 Funny thing happened the day I received the VC2S, it was the same day my local electric company had scheduled a power outage to make upgrades to the system which was supposed to be 8 hours. Power was due to be back on at 4PM which was good, the house was empty and no one would be home until 5PM at the earliest. Well, no luck as the scheduled repairs kept going until 6AM the next morning!!! Curse them. We began to run out of battery on our phones, even went out for the night to grab some diner and keep the phones on the car charger. We figured we would be back and presto, electricity at home…oh the joy quickly turned into despair. That is when I decided to look at my selection of battery chargers to see if any would provide a power bank function and low and behold I saw this on the back of the newly arrived VC2S: 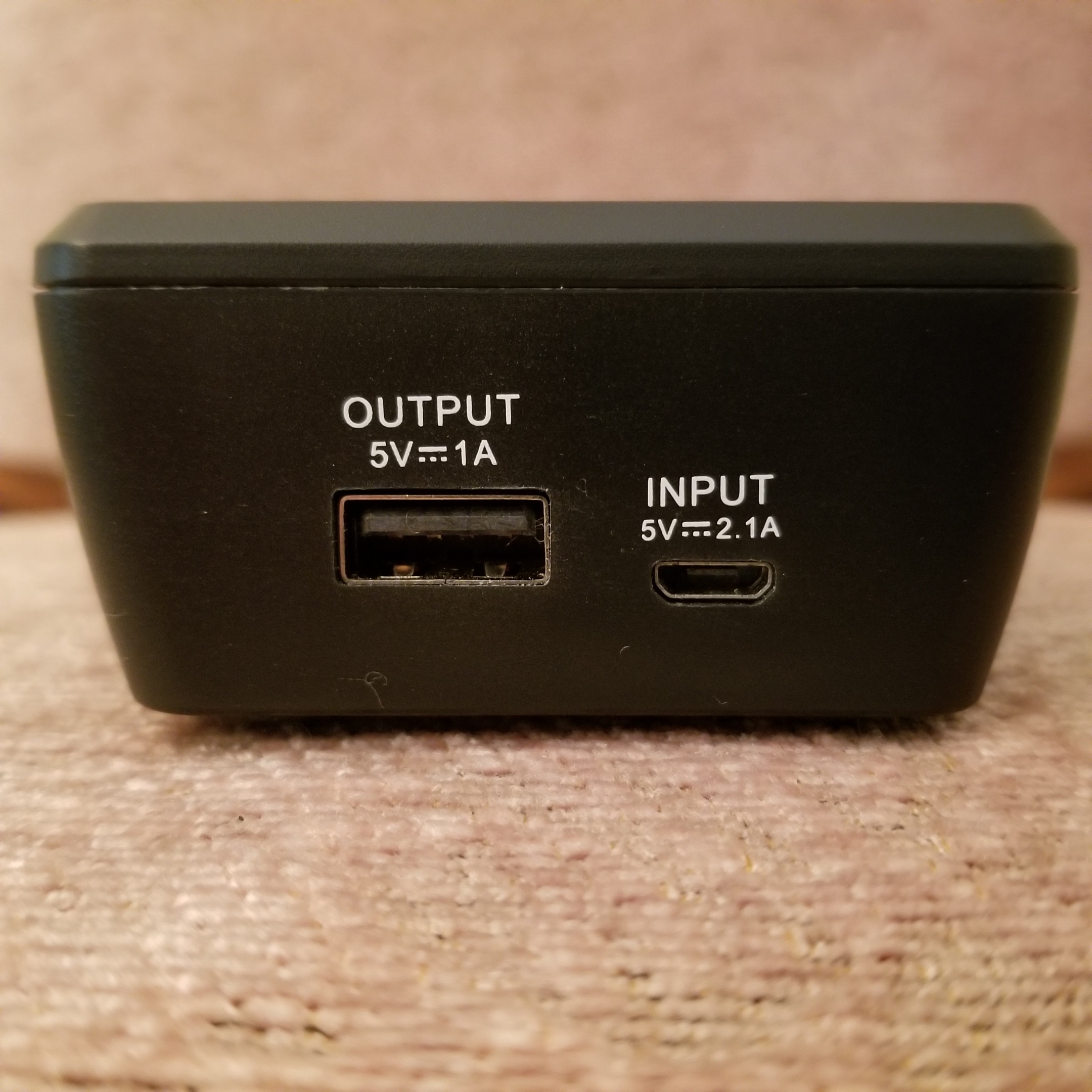 OH JOY!!! Can’t say how much this came in handy that night and turns out 2 others nights as the high winds in S California knocked out the power 2 more times in the last month, one lasting 24 hours. Works with just 1 battery but you can install 2 if you like. It prioritizes the left battery to drain first so you would not want to use married batteries as the drain would not be equal.

I got out an old phone to show the charge (use my current phone to take pics) and also an internal battery mod which can also be charged. 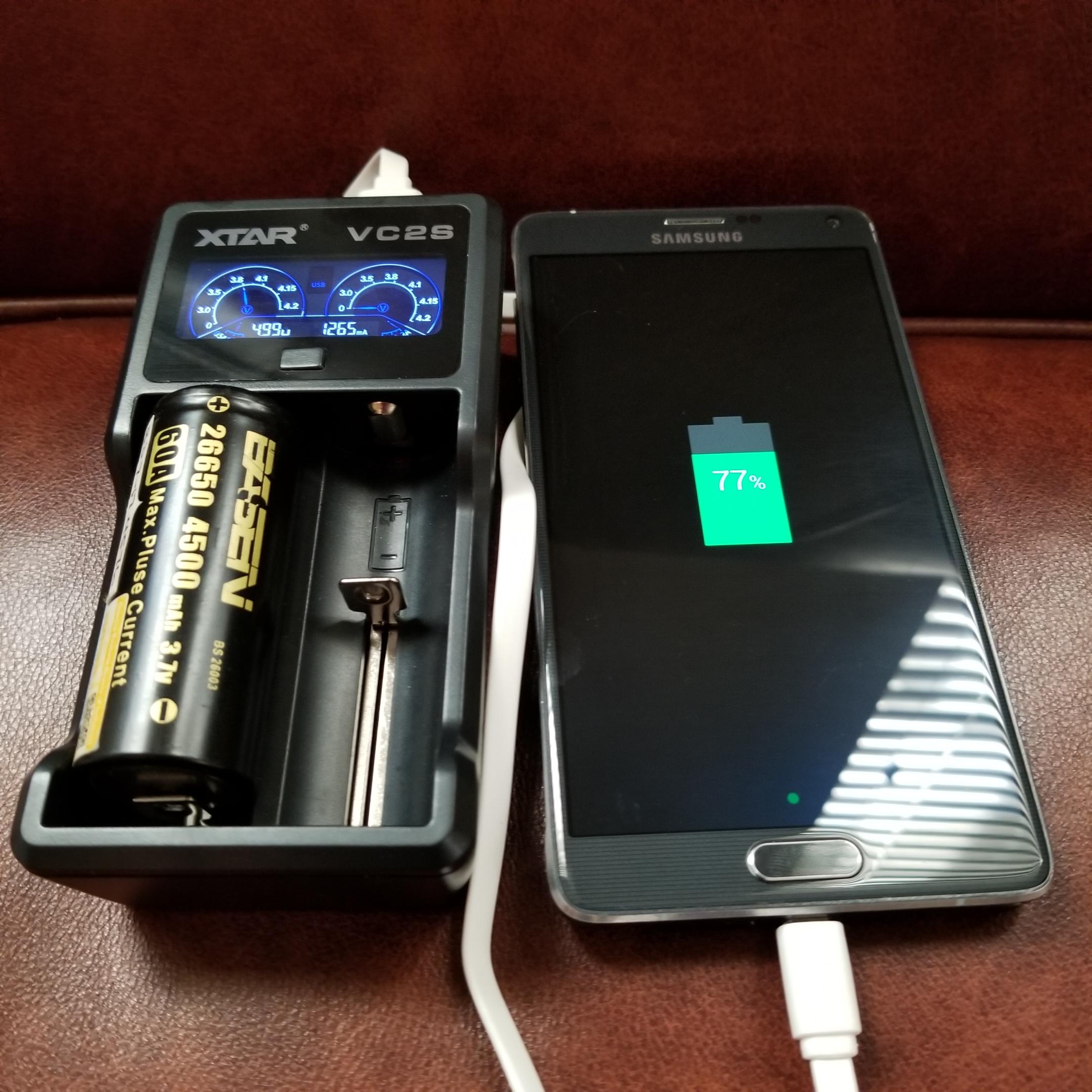 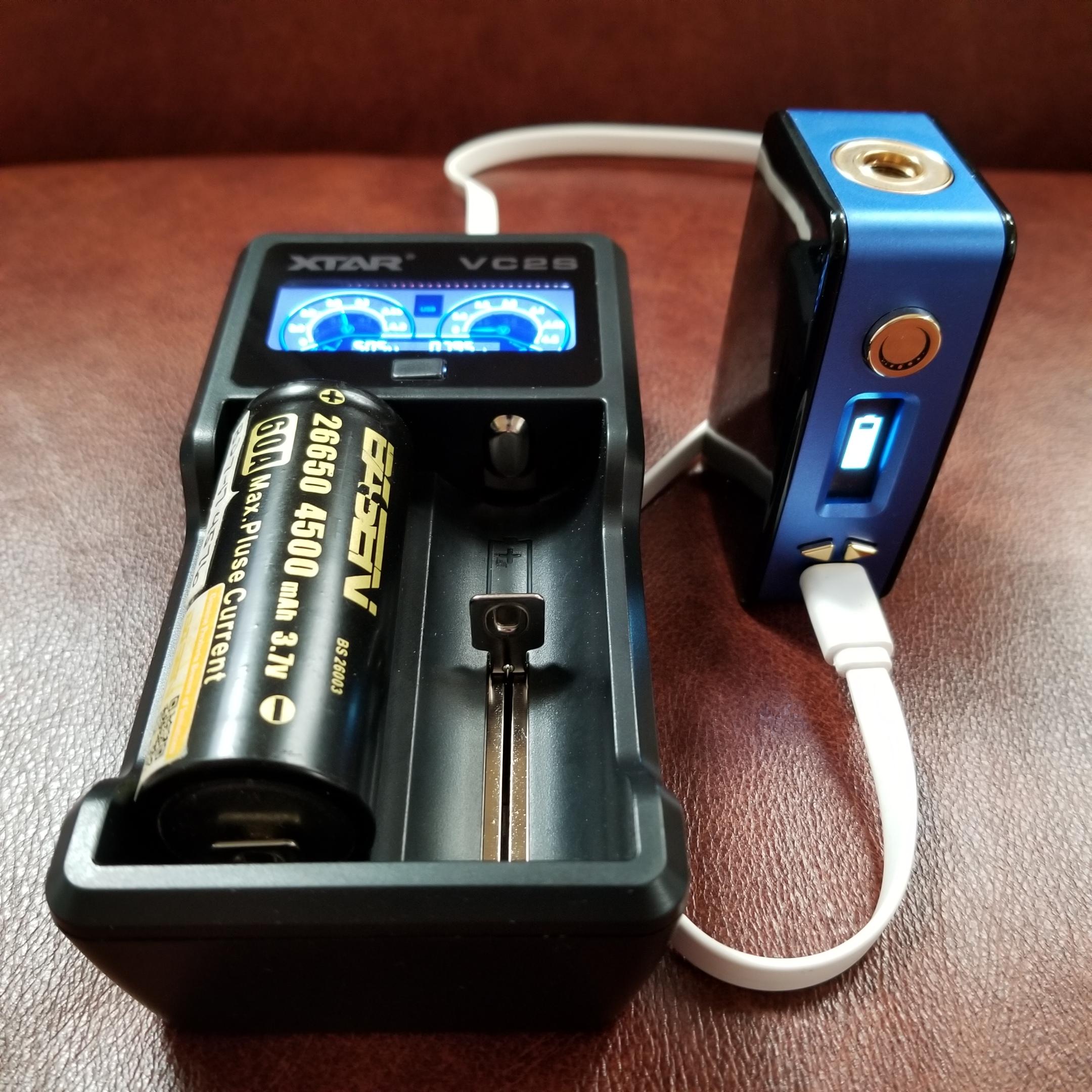 Of course it does work to charge your batteries and does a fine job unless you like controlling the amp rate of charge. There is a selection button but that is to change the display from CAP (Charging Capacity) CCR (Real Time Charging Current) and IR (Internal Resistance) You can also press and hold the button to dim the display if you so choose. 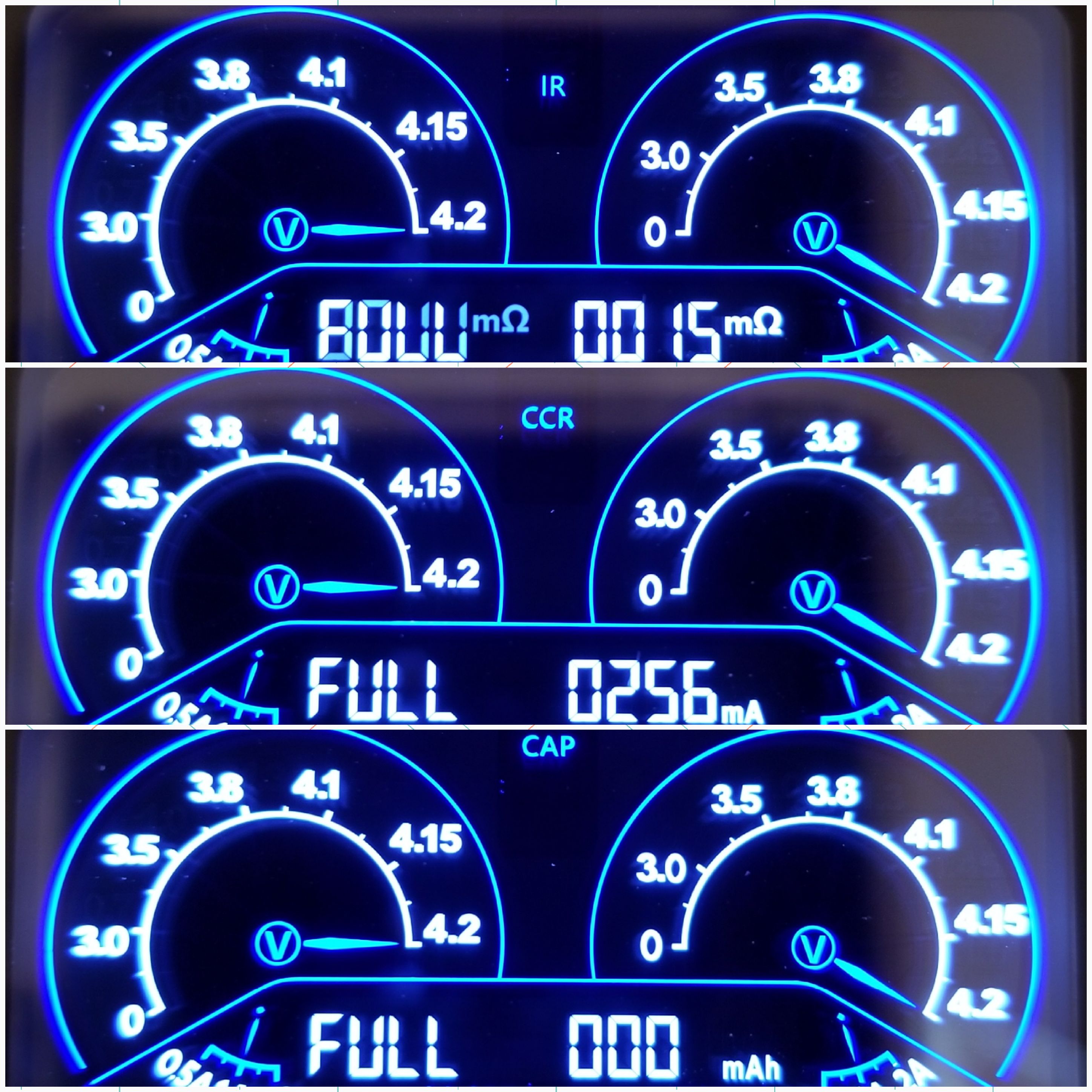 The charging rate is determined by the internal resistance of the battery, most Li-ion batteries will charge at 2 amp for a single and 1 amp each for dual. The only time I had 0.5 amps show up was when I was testing the 0V Activation Function with an old AW 18490 from my Provari days. This battery was sitting to long and the voltage dropped too low. The VC2S measured the battery and selected Ni-MH and began charging at 0.5 amps then after awhile switched to Li-ion and began charging at 1 amp. It was able to fully restore the battery but I only keep it around to test these functions. Once a battery has been depleted that far best to get it recycled when using it for a vape device.

Please not that the VC2S does not come with a wall wart, you must supply your own or buy one from Xtar: http://www.xtar.cc/products_detail/productId=85.html To get the best performance you will want the one I just linked, a 5V 2.1A Wall Adpater. You can also use a wall adapter with the same specs if you have an extra lying around, the wall adapter for my Samsung Galaxy Pro 12.1 was the same specs and works.
It also works with most wall adapters you may have lying around from an old cell phone. I tried just that with a 1 amp wall adapter and it still said 2 amp when charging 1 battery and 1 amp when charging a pair.

No problems charging any battery I used with the VC2S which I used exclusively along with the D4 for 4 weeks. What I would have liked to see is an option to change the charge rate, I generally charge at 0.5 amps but with the VC2S I was limited to 2 or 1 amp depending on how many batteries I loaded into it. Would have been good to include a wall adapter as well but that seems to be the norm with the VC series, my 4 year old VC4 didn’t include one either. 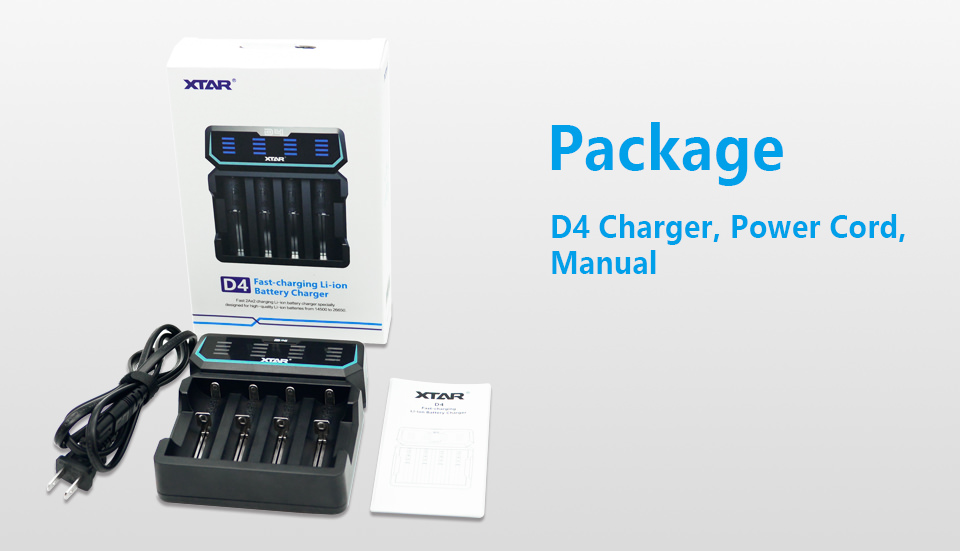 Just like the VC2s the first thing I checked was compatible with 21700 and 20700 batteries, no problems fitting and charging either and 20650 and 18650 batteries were fine as well. 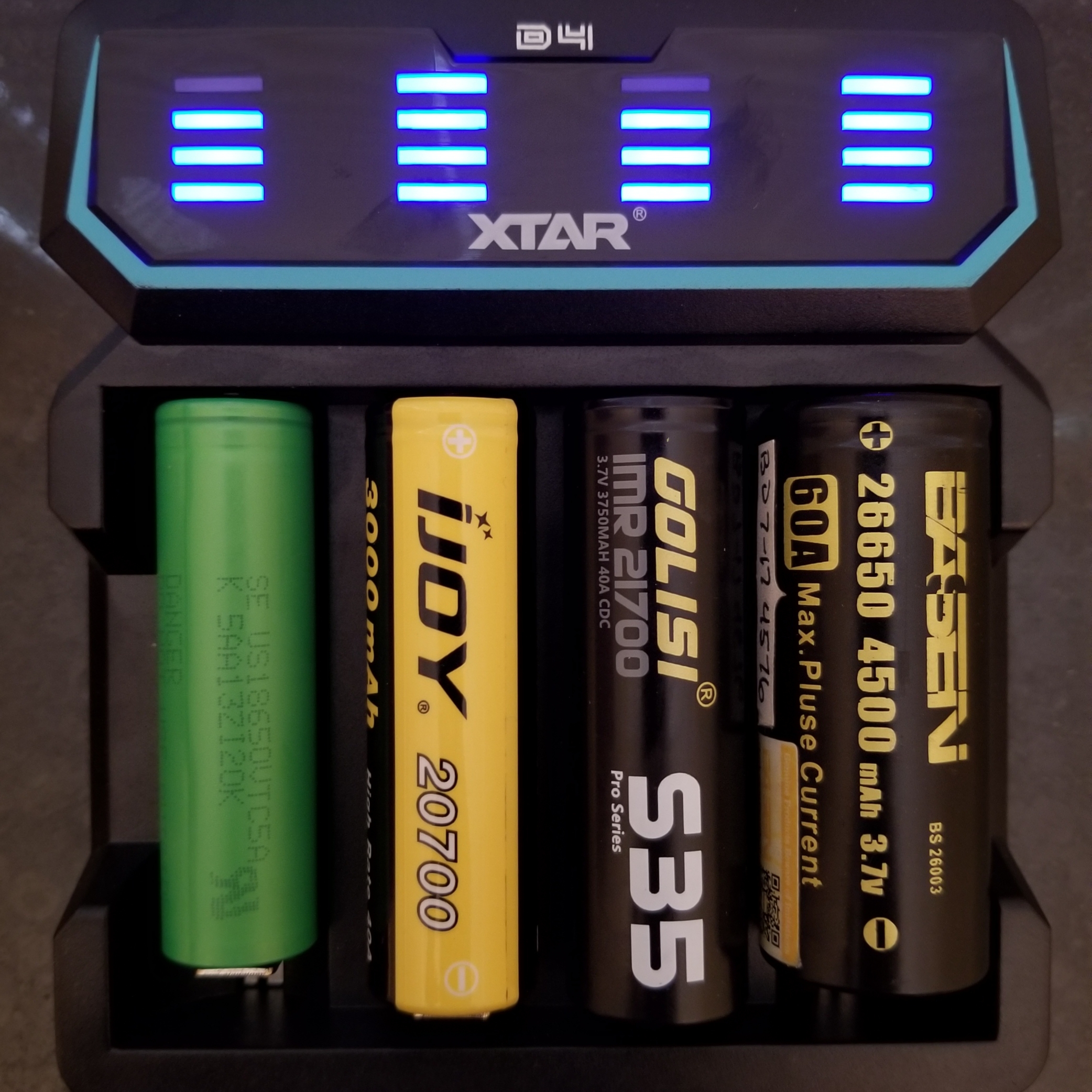 Now this is a much more simple design, no buttons and no need to worry about adding in your own wall adapter, it comes with a normal power cord you just plug into the wall.

No graphic display, just 4 LED lights above all 4 battery slots which flash showing the current charge of each battery, simple as can be.

The slots are marked showing the charge rate. 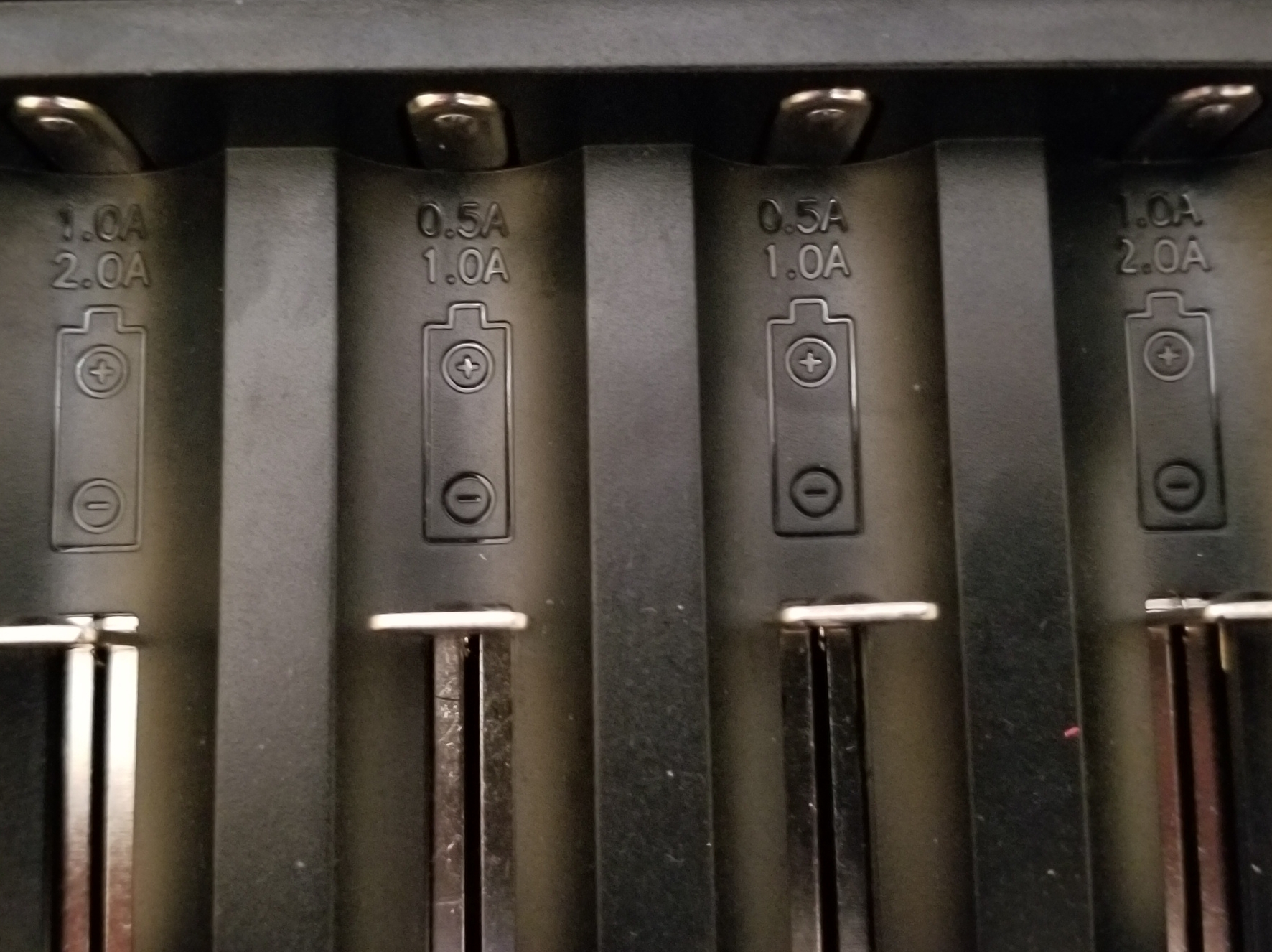 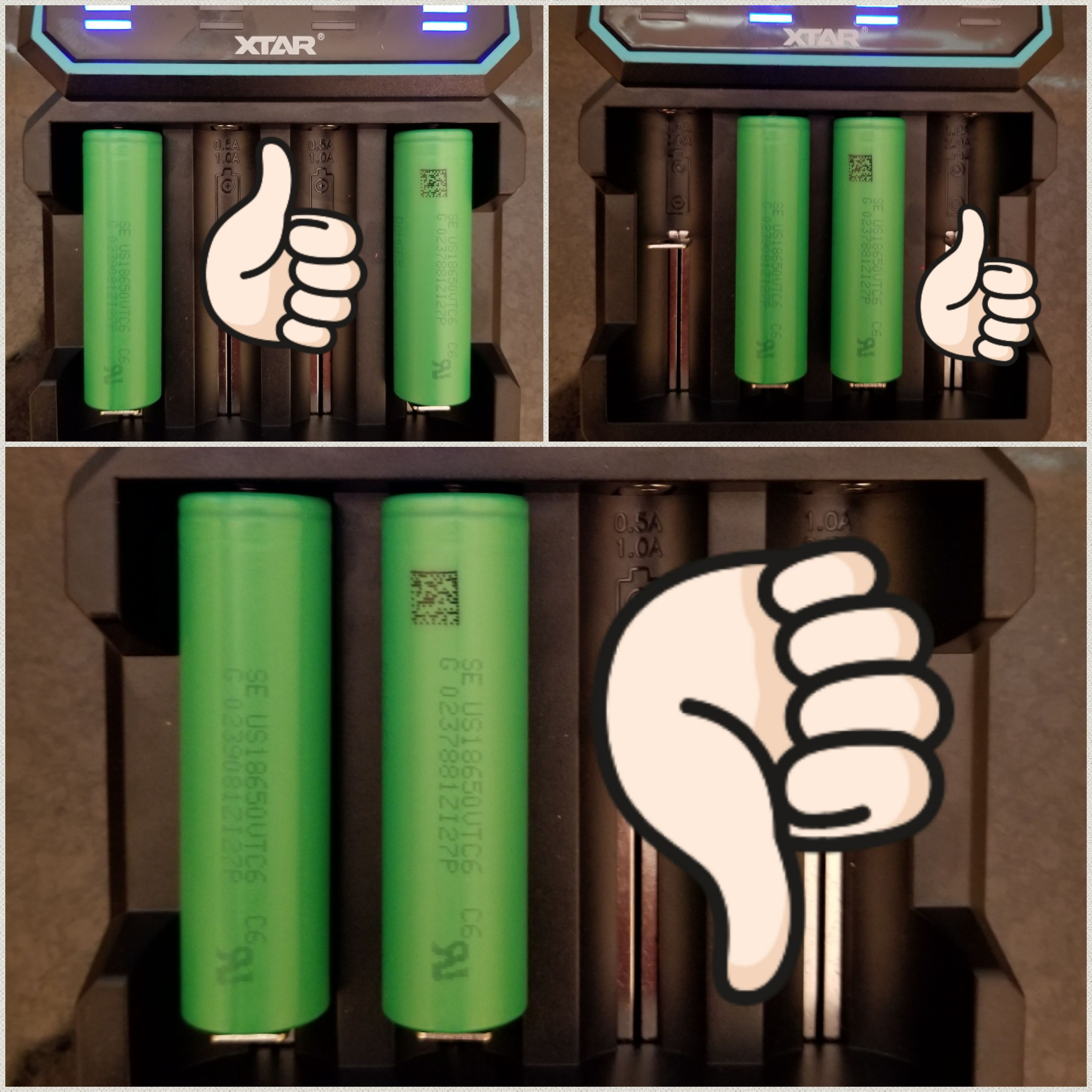 Now the tricky part comes in if you have a 3 battery mod with 3 married batteries. If you charge all 3 at the same time 1 battery will charge at 2 amp while the other 2 charge at 1 amp which is not ideal. You can get around this by charging a 4th single battery in the last slot which will drop the charge rate on all the slots to 1 amp. Not a great way to go for 3 married batteries, I would not recommend this charger if you need to charge 3 married batteries.

The D4 is a simple charger which comes complete and ready to go out of the box. Includes 2 fast charging 2 amp battery slots on the outside with 2 1 amp slots on the inside for a total of 4 battery charging. No options aside from the work it automatically does like the 3 stage charging for optimizing battery life and the 0V Activation Function which can revive batteries that other chargers will not charge due to the volts being too low. If you just want simple then the D4 just might be for you, not recommended for charging 3 married batteries though.

I have to say that the VC2S will be a charger that I will never get rid of, mainly for its power bank function which is something I never thought I would need until the power went out in my home…3 times in the last month! I have been in this home for more than 7 years and this is the first time I have lost power but the VC2S saved my ass for sure! I cannot overemphasize enough how valuable having a power bank that works with all my current batteries is, a sanity saver for sure. Of course you can buy a power bank with an internal battery but once it is depleted how are you going to recharge it when the power is still out? With all the batteries I have I could have kept the power bank going for a long time, this would be great in case of emergencies as well.

As a charger both the VC2S and D4 disappoint me in there inability to change the charge rate, I like charging at 0.5 amps as it extends the life of a battery. Higher rate charging is great if your in a hurry but it will tend to lessen the overall life of your battery. Still doesn’t make sense why the VC2S does not come with a wall adapter as well. If someone was to purchase one without knowing or having a wall adapter already would be an unpleasant surprise.

If simplicity is what you are looking for and fast charging is what you want then both the VC2S and D4 worked flawlessly for me, I have no complaints in that regard.

Being this review evaluation was only 4 weeks I cannot talk to longevity. I can say that the first high end charger I purchased was the Xtar VC4 about 4 or so years ago, still works the same as the first day I bought it. Both the VC2S and D4 seem sturdy enough and the simplicity of them both could mean less that could go wrong in the long term? Nothing about either makes me question the long term use and my experience over the years with Xtar chargers has been nothing but solid well made products.

You can find out more about the VC2S here: http://www.xtar.cc/products_detail/productId=198.html

They also have a charger/power bank with a higher output: http://www.xtar.cc/products_detail/productId=189.html I think I might purchase that myself.

Great review! Thank you very much for the note about charge rates. I like to keep it low and slow, and may have missed that if I was researching by myself. Well done per usual.

I am with you, usually like slow as well for longevity. I only break out with the fast charging when it is a battery I do not have much of and need it fast.

I know many don’t care, they just want it fast but for people like us we need that info.

Thank you my friend.

We had one spark up overnight close to me that had my phone blow up with texts from family and friends overnight. Luckily the brave firefighters put it out already, damn heroes.

Great to see these reviews coming out on chargers. Important stuff imho. Thanks!!!

Glad you reviewed these. I am with you and @anon96380778. I prefer to charge low and I have kinda been shopping around for another charger. I would have assumed I could choose the charge rate. Great job and thanks! @anon96069639 I am fine thanks for your concern. I am in North Orange County near the ocean in the middle of concrete and asphalt. Not as much of a chance of fire here. Its terrible what these people are going through. An old friend of mine left from Phoenix on Monday to pick up his elderly mother from Paradise. They haven’t been able to get close to her home to confirm anything, but it looks like its probably gone.

@SmilingOgre would love to see you do charger reviews knowing how big your Ogre brain is. Thanks my friend!

@Jim22 I even double checked with Xtar on the charge rates in case there was some secret button combo to change the charge rates on the VC2S, they confirmed there was none. From what I have read it is not a drastic reduction in longevity charging at higher rates but I have a lot of batteries so charging at 0.5 amps is worth it in the long run.

I feel so bad for those affected by the fires and Paradise was heartbreaking to say the least. I am glad to hear your safe @Jim22 and hope they contain all these fires real soon, scary times.

Looking good over here too