Would you buy a 30mm Modfather RTA or a Steam Crave Plus?

I just built another LIPO mod, and it needs a big atty.

My first LIPO mod has a Steam Crave Plus and I like it a lot, but

Would you recommend I buy a 30mm Modfather RTA or another Steam Crave Plus ? And why ?
Or maybe a Modfather RDA ? It’s not going to be a EDC, but will sit at home and hopefully not get all banged up like my EDC mods.

Oh, and the goal is more for flavor than clouds.

Great question. I have been interested in both and will interested to see what people say that own both.

Also, they’re both getting a little “old”. Are there any other 30mm RTAs or RDTAs (RDA??) that might be in the running ?

I have all three.

I would take the Plus over the Modfather UNLESS you need a series deck which is really handy for lipo mods etc.

Don’t get me wrong I love both of them it is just I love the plus a little more.

The modfather RDA is really hard to compare to other RDA - the A/F is smooth and really good perhaps a little less airy than the 30mm buddha but the series deck makes it a different beast.

If you want comparison pics between any of them lmk

I have been using a 30MM RDTA for about two years now, but neither of those. As I’m sure you know, it is the Hellvape Iron Maiden. It is quite a different beast from those two, but it has suited my needs for two years so I guess I like it… It has a 24mm building deck because it has a ceramic anti-spitback cap that reduces the workable area. 8.5 ML capacity, velocity style deck, ceramic base/spitback cap, massive airflow. There’s nothing I don’t like, except the fact that it is gone from the sales floor now.

Which leads me to the favor… Can anyone source it anywhere? I’ve tried as many places as I can think of, including eBay, and it is all gone. I would love a few spares. 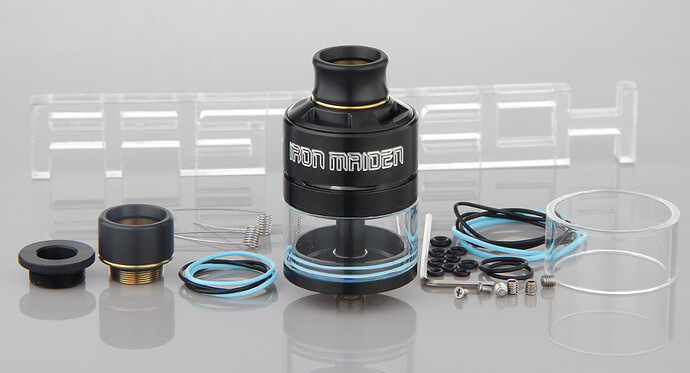 How’s the flavor on the Modfather RDA in comparison to the Plus ?

I’ve researched the Modfathers but don’t have first hand experience with them. If the Plus had a serial deck, I’d be all over it !

I always liked the idea of a serial deck too. Makes TC builds with big coils a lot easier to math out.

They are pretty equal flavour wise to me.

Another steam crave plus with 20ml tank. It’s the perfect tank for high vg liquids. The modfather…damn thing leaked every bit of juice I had in the tank. I don’t like playing leaker games with tanks and that tank pissed me off. Never used it again. Steam crave aromizer plus is one hell of a tank and never leaks. Wicks change fast. Flavor is the best and I’ve sure tried a lot of tanks. I’ve got 5-6 20ml aromizer plus tanks. Best thing since self adhesive stamps.