Many thanks to @Wotofo & Antonio for sending this for review. I have no affiliation with Wotofo or VC and the following is my thoughts, experience & opinion.

wotofo-profile-m-rta-banner-pc1920×700 288 KB
Following on from the Profile RDTA, Wotofo and MrJustRight1 have looked at the RTA version and created a new version to update the original Profile Unity. Read on to see what changes have been made.

First thing to note is Wotofo have listened to their customers and made it easier to remove the plastic lid, adding a couple of cut-outs to grip the box. Packaged in the usual green & black theme with Profile M and MRJUSTRIGHT1 printed on the lid there’s a list of contents on one side, scratch/verify and colour opposite and usual company info on the rest. On the back is the usual warnings, trademarks etc. Removing the lid and the RTA is held securely in the foam tray with the expansion tank next to it. Removing the tray and you will find all the extras that Wotofo like to add including a screwdriver, mesh shaping tool, O rings, spare screws & taller 810 drip tip. Also included is cotton strips and three mesh strips including the new Clapton mesh resized for the smaller deck. Six colours are available, SS, Black, Blue Metal, Gold, Blue & Rainbow and Wotofo are using a matt finish which looks hard wearing.

head4000×2500 1.73 MB
First thing to note is how short this RTA is compared to the Unity, 27.8mm compared to 40mm without drip tip. Both measure 25mm at the widest points. The Profile M is top airflow, entering the chamber via 21 holes, and supplied with a low profile 810 drip tip. AFC ring is smooth to rotate revealing a largish inlet on opposite sides and gives a more open vape than the Unity. Being top flow this also negates the leaking issues some users had with the Unity so good news for those that struggled to wick the predecessor. Filling is top fill by sliding the top and accessing the fill port. The deck is identical to the original Profiles including size, meaning it will not accommodate the mesh strips designed for the Profile 1.5 or RDTA. It’s the usual two clamps, sprung ceramic block with wicking ports similar to the Unity. The tank fitted is 3.1ml capacity and the extra tank is 4.5ml, both PCTG. Threads are smooth although this being pre-release would explain the initial crunchy feel.

body5992×2988 2.2 MB
I tried an SS316L mesh as a starting point as I already had a Unity set up the same way to compare performance. If you’re familiar with any of the Profiles, you’ll know to bend the mesh with the forming rod before fitting to the deck and tightening the clamps. Using Wotofos Xfibre cotton 6mm laces, wicking is as easy as pull it through & slide back and forth to even out. Cut the cotton at 45 degrees, fluff up the cotton and trim the ends before pushing into the wells. I cut just outside the deck edge and the cotton was enough to dam the wells without sitting on the deck. Juiced up and tank reassembled I started around 45w with airflow wide open, same on the Unity. Airflow is smooth but more open than the Unity allowing me to up the power to 60w with ease and wicking kept up well. I found I could push this a little harder than the Unity, somewhat surprising given the juice is only fed from the bottom and the Unity bottom and side. Both give a flavourful vape with the M pipping the Unity at the higher end of power, but the Unity has a more condensed feel which benefits it lower down. 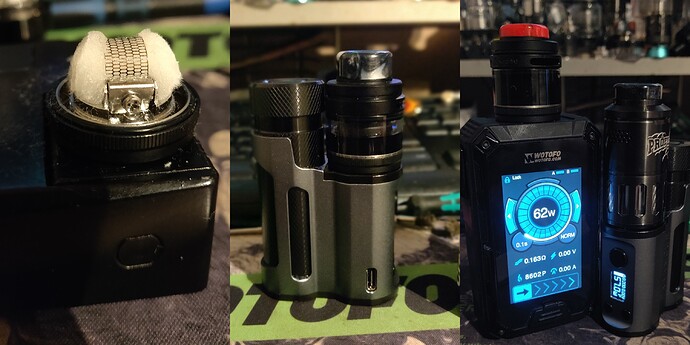 build3000×1500 958 KB
Next for comparison was the Clapton mesh as that has been my go to in the RDTA. Take your time wicking the Clapton though as it is easy to deform it and render it useless. Easiest way I have found is to twist the shoelace cotton before pulling it through and gently untwisting once in position. For those looking for a warmer vape compared to standard mesh then this is the one for you. It’s closer to vaping with coils, heat & flavour abound and, in my opinion, make this RTA sing. Not quite RDTA levels of flavour and cloud but that was going to be a hard ask.

The deck will accommodate a single coil build and you don’t need to build low resistance given the reduced chamber size. Just take care not to over tighten the clamp screws as it may damage either the threads or snap the clamp.

Having already owned the full Profile range I do like this for it’s ease of wicking, no leaking and flavourful vape. It’s another solid product from Wotofo that delivers as well as it’s predecessors. It compares well against the Unity for flavour and clouds and excelled with the Clapton mesh.

There are a couple of downsides though and the major one being it’s thirsty. Even with the 4.5ml tank on you’ll be filling up often. Other niggles I found were when filling up and if you overdo it juice will escape from the air vent that is exposed when filling. Also the silicon seal on the fill port gets pulled up when withdrawing the bottle nozzle and could get damaged if you try to close the top without noticing. Only other issue is with the clamp screws that can be awkward to turn due to the centre being level with the top of the deck. The supplied screwdriver is just thin enough to work ok but a thicker screwdriver runs the risk of rounding the heads. One other thing that bugged me was the extended tank was that it being smoke grey juice level was nigh on impossible to see although this may have been exasperated due to the fact I was sent a black version.

Does this come with a BF pin for squonking?

Not true in all Wotofo product’s. Take a look at the Farris.

That’s an RDTA, short tank & suitable for squonking. The deck has to be above the juice, not below otherwise the juice would returnt back down the pin. That is why an RTA isn’t squonkable.