Wotofo join the pod crowd with the Manik Pod kit. Winner or loser?

Big thanks to Wotofo for sending the Manik pod kit for review. These are my thoughts & I have no affiliation to Wotofo or VC.

I have a lot of time for Wotofo & their products, but I’ll admit I did groan at the thought of a pod kit from them. In general they concentrate on the RDA/RTA/RDTA & Subohm tanks, so this was a break from the norm. Read on to see if it is just a generic pod or brings something new to the table. If you are looking at this kit for RML/ML you will be disappointed I’m afraid, but DL users should read on. 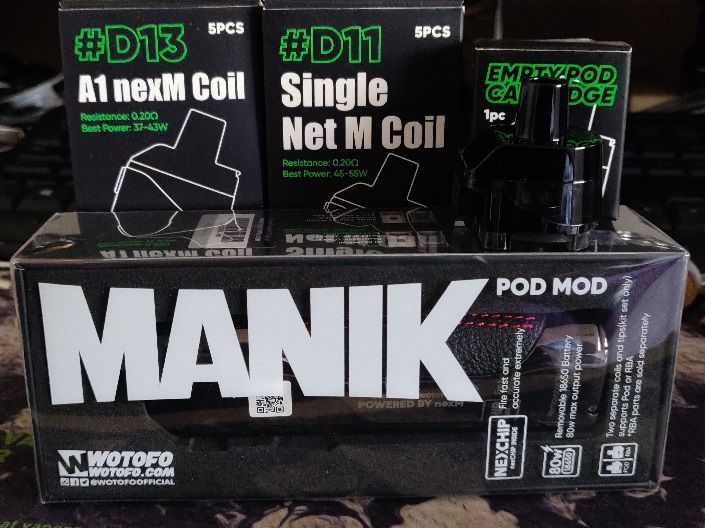 Coming packaged in the normal Wotofo style, box tray with a plastic lid, the Manik logo is prominent. On one side there is a graphic list of the available coils, wattage ratings & security scratch code, the other has Manik. One end has the Wotofo web details & the other has the RBA pod (not included) image. On the rear is the usual contents list, company info etc. The lid itself is plastic & slides off, unfortunately this is a struggle to remove as it lacks a couple of finger cut-outs to grip the box while pulling up. The lid has Manik name, chip info, max wattage & pod types available. The mod/pod is securely held in a foam cut out tray & underneath is the mini USB lead for updates/charging. Also included is a user manual, 2 coils & an instruction card for fitting removing the pod.

In the hand & in use

Styling of the battery section has followed the rest of the crowd with a leather (pseudo?) grip section with the logo embossed & contrast stitching. The body is alloy but Wotofo say the coating is “Nanotech coating” to prevent corrosion & wear. The colour I received was the Prism Gunmetal which seems to have a dark copperish appearance & does appear to be the most polished finish & is a bit of a fingerprint magnet. The leather section on this is black with red stitching. There’s also blue, red & beige.

The logos on either side are subtle, compared to other makers. The battery door is the push/slide style & feels fairly solid & not flapping around like a flag in the wind like others I have used. Battery orientation is clearly marked inside the compartment, positive up. There’s no battery/door rattle & has been no problem in use. The 0.96” TFT screen is nice & simple with battery symbol & % at the top, Watts & padlock symbol below. Underneath is Volts, Ohms, Puff counter & at the bottom Puff time. Simple clean layout as this is a power only mod.

Menu colours can be cycled through Green, Blue, Purple, White, Red & Orange by pressing the “Fire” & “+” button. Using the +/- buttons increases/decreases power setting in 1w increments & round robins. Three clicks of the “Fire” button prevent accidental firing. Pressing both “-“ & “+” locks power adjustment & “Fire” & “-“ clears the puff counter. Five clicks on the “Fire” button power on/off the mod. Beneath the screen is a mini USB port for charging/updating. Fire & up/down buttons are clicky without any rattling or movement. Charging via USB peaked at 1.3A & allows pass through vaping. As always, it’s recommended to charge batteries externally. 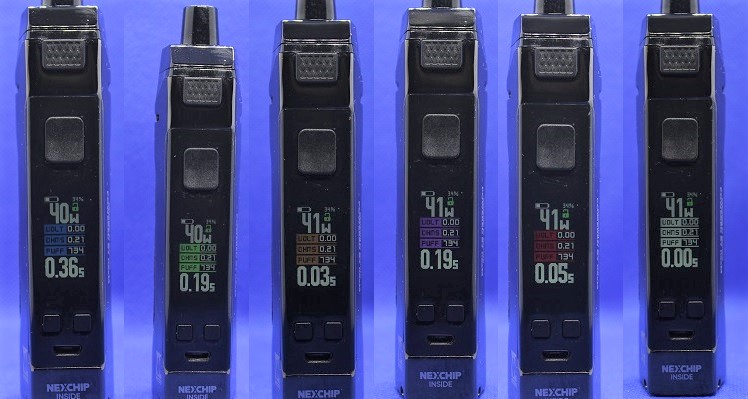 The pod itself is a click fit, no magnets, with a tactile button to release it from the mod. In use this has been great, no rattle or movement, although it is a bit stiff to begin with but does loosen up a little. The pod has to be fitted with the other end of the pod pushed down first before pressing into place. Two spring loaded pins provide the connection to the coil & the recess is sealed to prevent any leakage or condensation making its way into the internals. The pod itself is PCTG, with a built in drip tip & top fill meaning you don’t need to remove the pod to refill. Juice level is a bit hard to see, especially in poor light, but tipping the mod sideways allows levels to be seen. Coils are a push fit into the base of the pod. Lining the straight edges with the pod base. You will notice there is two airflow slots on either side of the mod but there is no AFC. 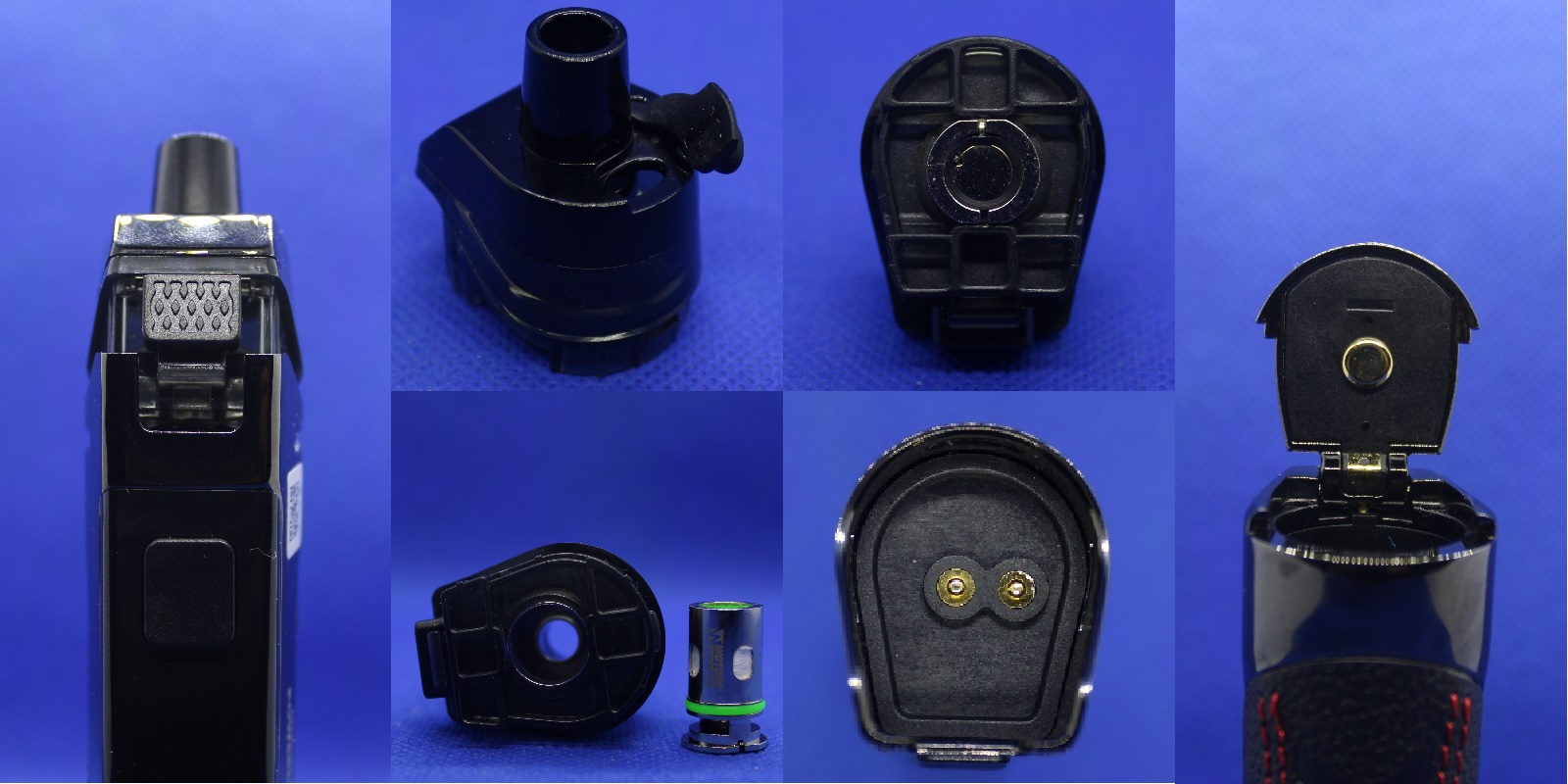 The first coil to try was the pre-installed D15 Clapton mesh. All the compatible coils are rated 0.2ohm but with various min/max power ranges & this one is rated 45-55w. As is recommended, priming a new coil before use helps to prevent any dry hits. Filling is pretty straightforward, lifting the silicon bung reveals a generous fill port that allows air to escape when adding juice. Tipping the pod so the fill port is upwards allowing you to see the juice level as it fills & prevents any spillage. As said, this can be done with the pod in situ or removed. Setting the power to 45w & after a few minutes soak it’s time to see how well these perform.

As I mentioned at the start, this is a DL pod system with no AFC & any restriction is provided by the coil bore. If you enjoy a DL vape then you’ll still be reading this far(I hope).

The NexMesh D15 coil is a Clapton mesh & personally my favourite of the 4 available. From 45w through to 50w it just gives flavour & clouds. Up to its top rated 55w it’s a warm vape with more flavour & if you take it up to 60w it still gives. Downside is it’ll drink juice & hammer the battery.

The next to try was the other supplied coil, the D14 conical mesh. If you are familiar with NexMesh & Pro sub tanks, then the conical coil won’t be new to you. The coil tapers from wide at the base to narrow at the exit to amplify the flavour & I do like this coil as it still gives plenty of flavour but is kinder on your juice/battery consumption being rated between 35-45w.

The D11 is a mesh netting coil with a rated 45-55w & while the vape was consistent there is a hint of a dry hit when chain vaping or pushing the power. This may well be down to the wick not being able to keep up due to the large metal surface area. At the lower end it performs fine, just not quite as good as the other 3.

The D12 coil, rated 37w-43w, in my opinion is almost as good as the D15 coil for flavour & vape & is a good choice for those wanting more frugal juice consumption.

As a bonus to this system the pod is compatible with Voopoo PnP coil range, including the RBA, & Vaporesso GTX coil range so it does open it up to more users but bear in mind the lack of AFC. As I was sent a spare pod it would only be right to try out this cross compatibility. At least with the PnP coils. I first tried the 0.2ohm PnP for a direct comparison & in the Manik pod it performed well although it felt a bit underwhelming. Likely due to how flavoursome the NexMesh coils are. I popped a D12 coil into a PnP pod, yes they fit fine, to see if the Drag X & it’s AFC added anything to an already impressive coil. Even with the ability to adjust the airflow my preference was for wide open but again I felt it outperformed the Voopoo 0.2ohm coil. I tried 3 of the 4 coils in PnP pods with much the same results, no tangible gain with AFC but definitely no loss in flavour or cloud. The 0.15, 0.2 & 0.3ohm PnP coils I tried in the Manik pod all performed well, the 0.15 probably the pick of the bunch. As always opinions are subjective but these NexMesh coils seem tailor made for the Manik & perform fine on the PnP pods & in my opinion equalled, if not bettered the PnP coils in both pods.

The Manik is a well put together kit with Wotofos’ usual eye for quality. It is an out & out DL vape & does it very well. Feels good in the hand & no annoying rattles. Yes it borrows design points from other brands, i.e. leather inset, & yes it does look like most generic pod kits out there. The NexM chip performs fine, power delivery is almost instant & very consistent. Battery life is comparable to the likes of the Drag X& other single cell 18650 mods, won’t last a day but does have pass through charging if you’re in need of a top up. The pod itself or coils haven’t leaked juice, unlike others, & only a small bit of condensation. The fact it is cross compatible with a wide range of coils is a plus unless you want to use higher ohm coils & restrict the airflow. The supplied coils are what make this kit good, they perform well & have a good 8-10 days life, possibly more if you stick to the lower ratings. It won’t be a consideration to those vapers who prefer a more restricted vape unless one wants to tape off one of the air slots. The coils from NexMesh are probably the star of the show, performing equally well in the Manik as they did in the Drag X. Only real fault I can find so far is the battery % is inaccurate. At 0% there was still 3.6v on the cell & I carried on vaping down to around 3.2v when the vape went cool.

wotofo-nexpod-mod-info051919×800 130 KB
There will be an RBA pod available by the end of November & I look forward to trying that out as it should open this kit up to more potential users with its adjustable airflow.

Thanks again to Wotofo for sending this in for review. More info available here Manik Pod Mod, The First 80W Pod Mod From Wotofo