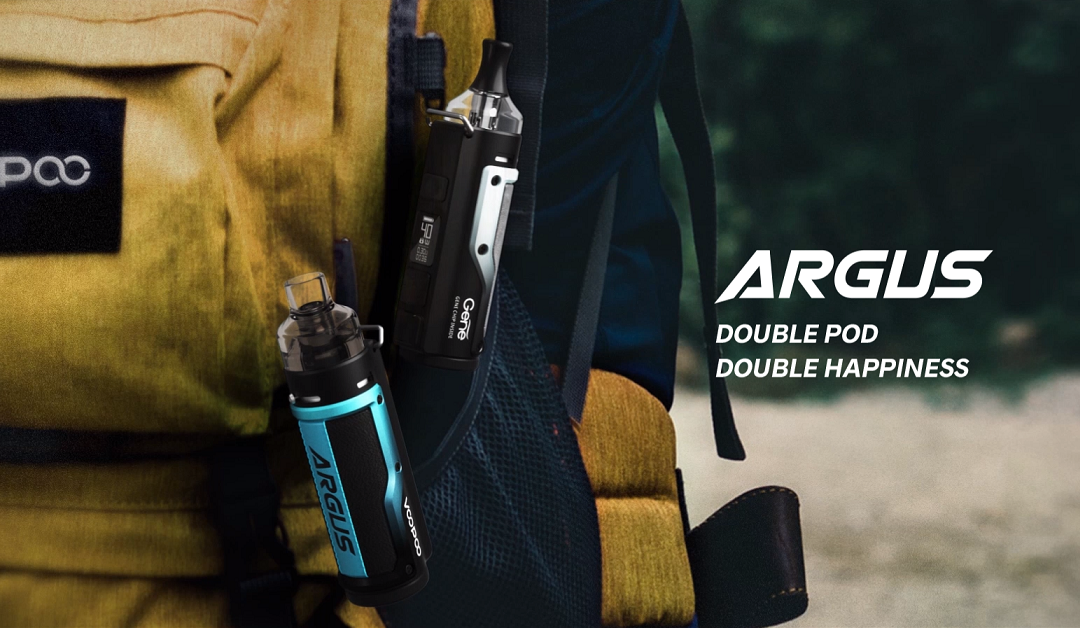 In 2020 Voopoo overtook Smok as the most prolific manufacturer but thanks to most of the products released being centred around the PnP Pods and coil heads we saw cross compatibility (always a good thing) and standards maintained!

The Argus Pod Kit is the in-built version of the popular Argus range which comes with both standard and MTL Pods and appropriate PnP coil heads. With Type C USB, 1500mAh in-built battery, adjustable airflow, Auto Draw/Button fire options and a hook which can be used to attach the device on to a belt etc this simple 40w maximum Pod Mod is certainly worth a look! 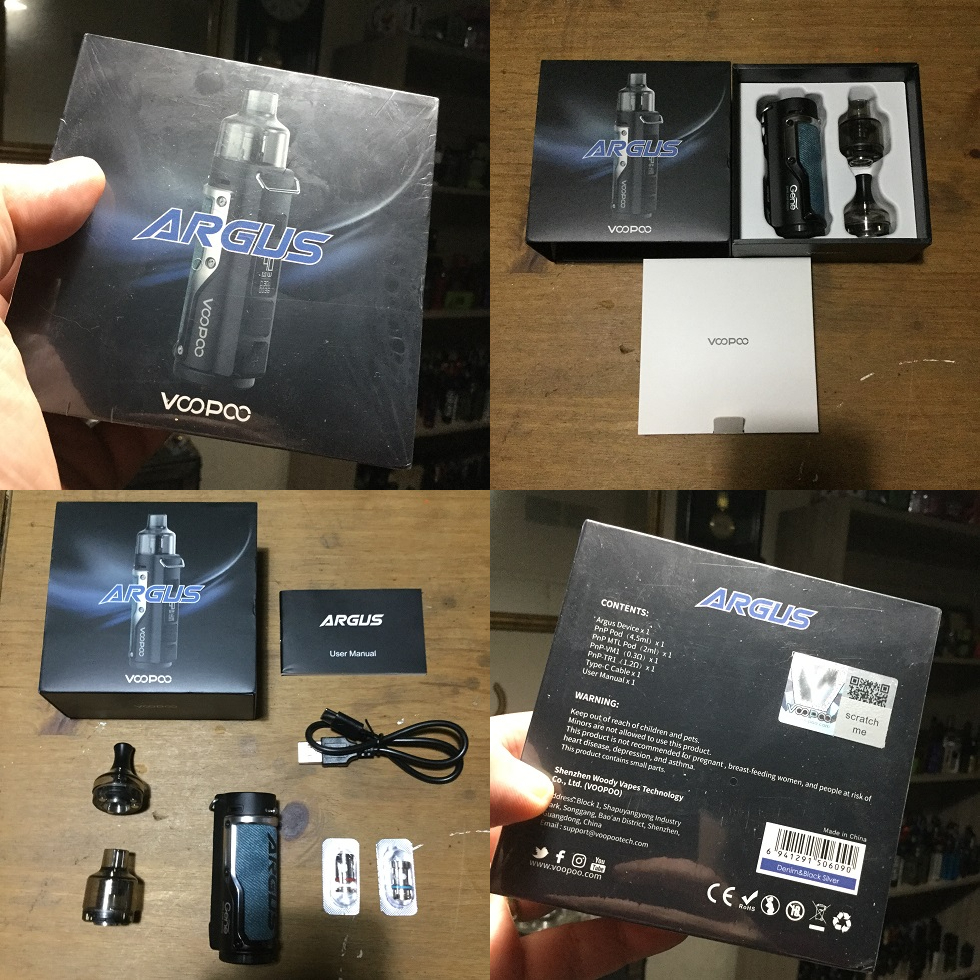 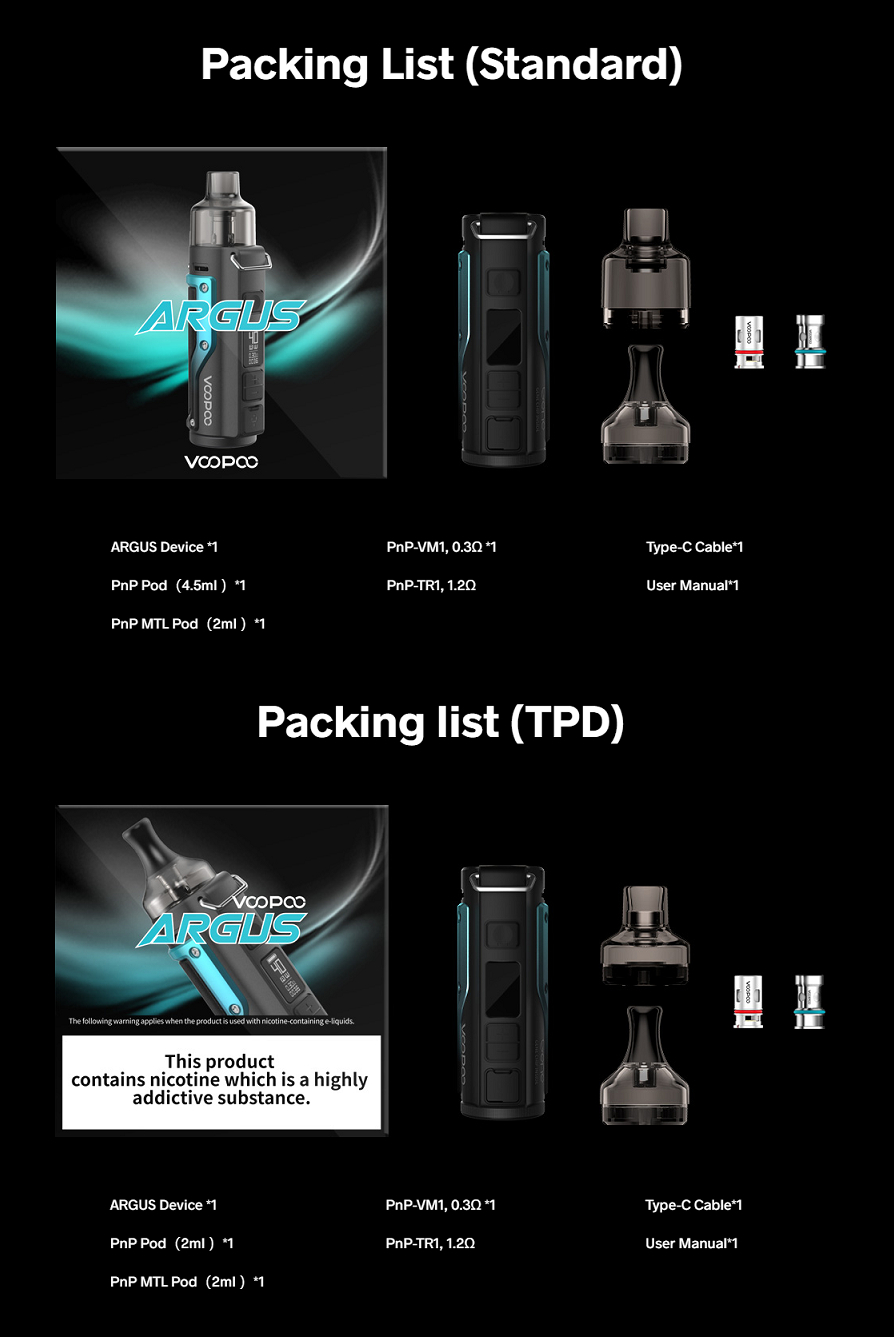 The Argus 40w Pod Kit came in cardboard packaging with pull out draw and on opening i was met by a cute busy looking device with that sort of SL-Class type form factor. The colour options refer to the spine and bracket as the main chassis on all options is Black and while most have that splash design we saw on the Argus GT mine doesn’t have that. I received the Denim & Silver version which has a Denim spine with “ARGOS” printed in Black which is held in place with a Silver bracket that fuses to Black towards the lower section, the colour options are Litchi Leather Blue, Litchi Leather Red, Carbon Fiber Black, Denim Silver and Vintage Grey Silver.

It’s a pocket friendly ergonomic device with a large rectangular fire button with circular concave centre, we then have a tiny screen followed by the rectangular navigational buttons. At the bottom of the face underneath the navigational buttons we have a silicone plug protecting the Type C USB port. The base has knurling which mimics a battery cap and we have quite a bit of branding on both sides.

We also have a large hook but nothing included that this can attach too and to be honest i love the look and size of this device apart from this hook which just dangles and constantly knocks against the device while in use. 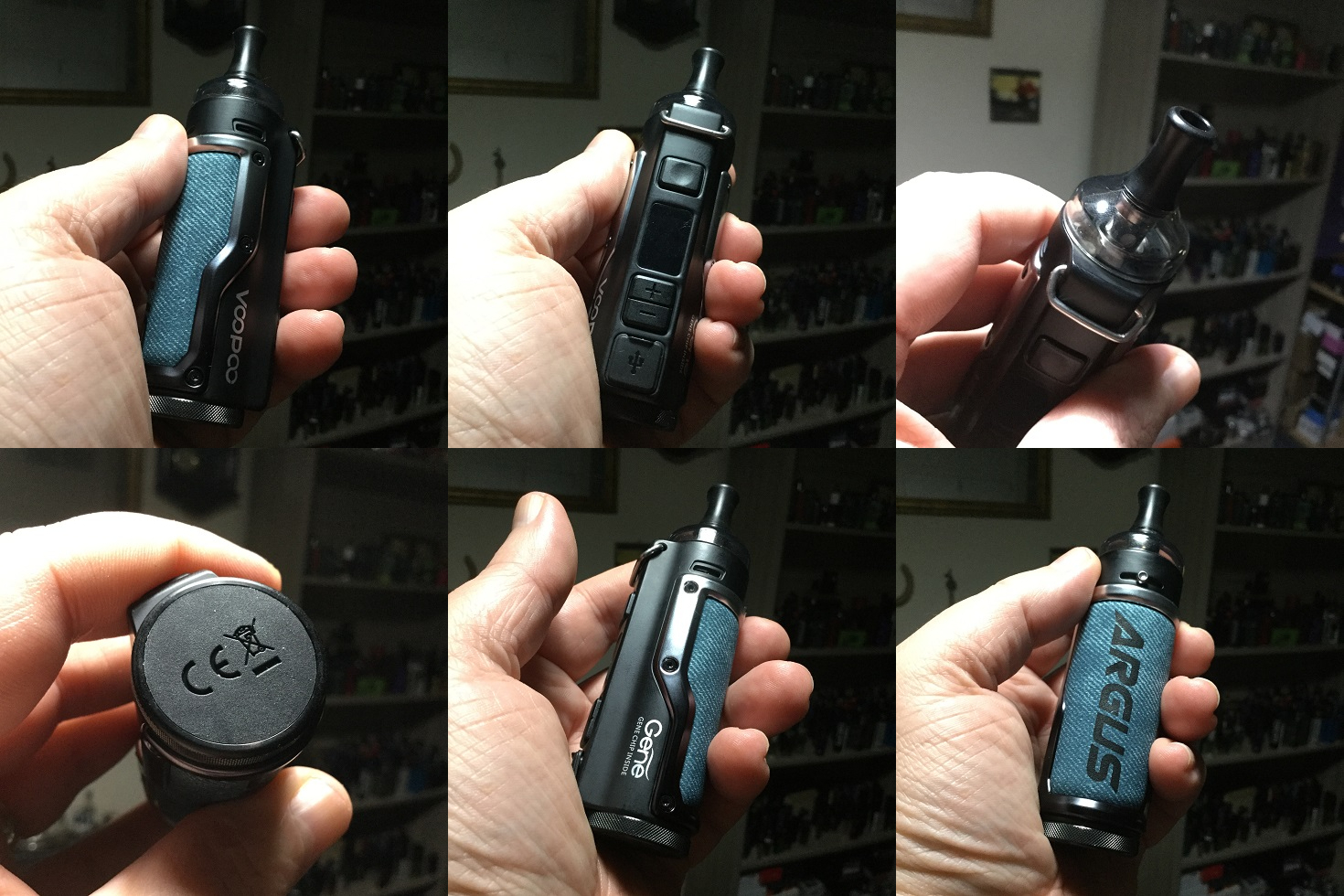 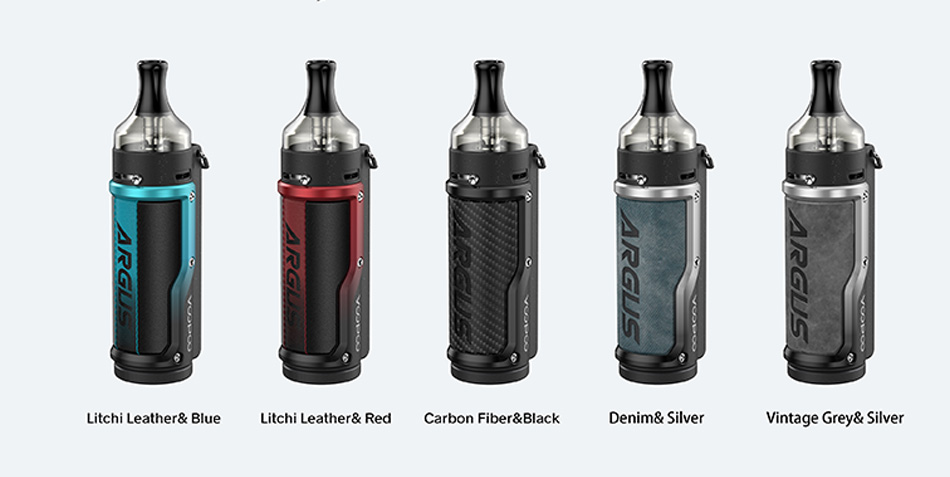 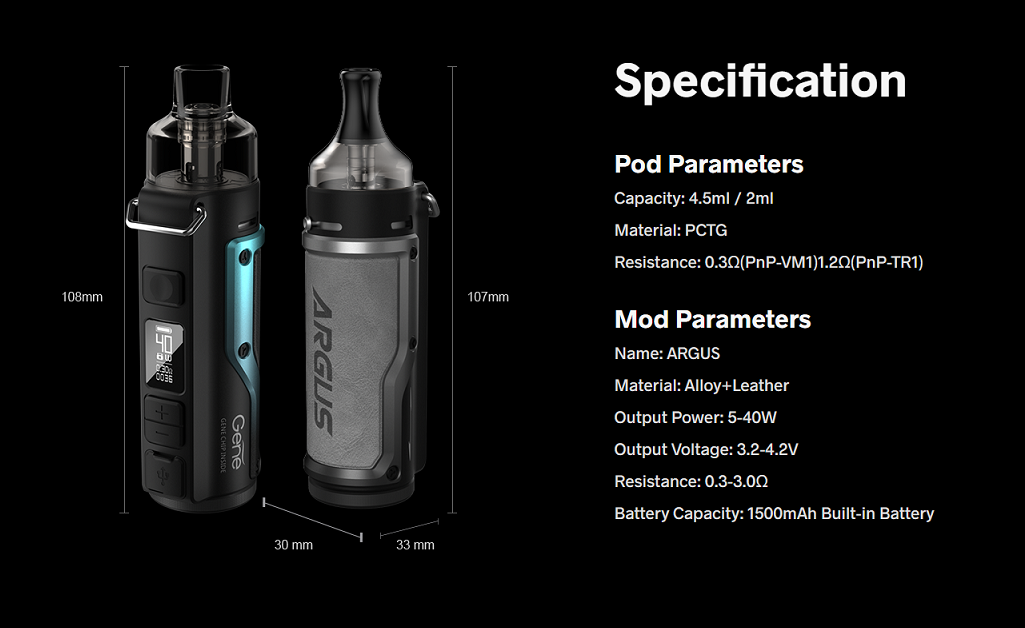 Included is 2 different PnP pods which are cross compatible with the other Voopoo devices that use the PnP pods. You receive the standard 4.5ml PnP pod (2ml version TPD) and also the 2ml MTL PnP pod which has a MTL style drip tip but seems to be fixed so unfortunately you can’t use your own. Most of the pod protrudes out of the device for good visibility of your juice so no issues there.

Looking at it’s circular base (both pods are identical at the base) we have 3 evenly placed strong magnets and a silicone flap kept attached with a metal stud. The flap is easy to lift to pull the bung out revealing a very generous fill port plenty big enough for a quick, mess free fill.

Included is 2 different coil heads none of which are pre-installed and both part of the Voopoo PnP range. The coil head just gets press fitted into the pod as is the case with most of these pod mod pods! 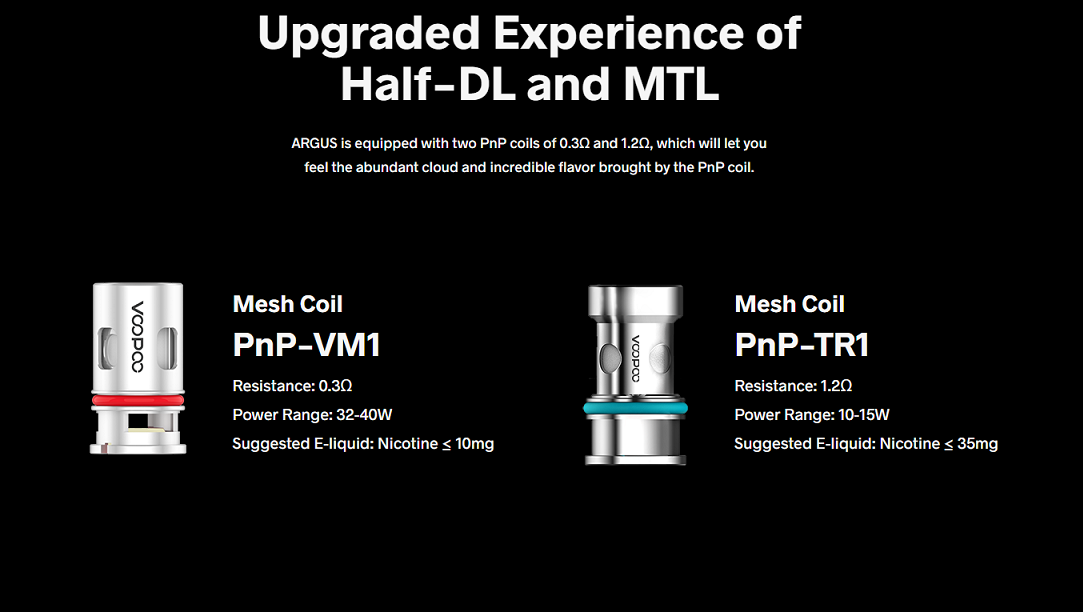 Although the picture says the 1.2ohm coil head is mesh that’s incorrect, it’s a vertical round wire coil head!

The Argus Pod Kit is compatible with Voopoo PnP range of coil heads which is quite extensive!

The bottom of the bay only has the round central section visible with the rest of the floor which leads to the airflow slots being obscured by the perimeter having an upper metallic shelf for the pod magnets to attract too. Looking at the bottom of the bay we have a raised central positive and outer raised negative spring loaded contacts which look to have a silicone seal. 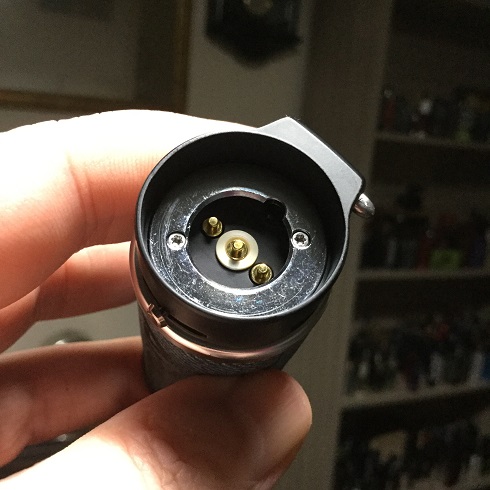 The pod snaps into place and fits very securely, the dual negatives and metallic surround shelf design means the pod can be fitted without it needing to be lined up a certain way, good design! 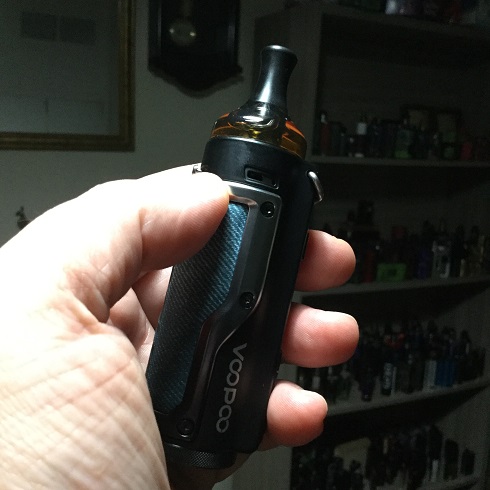 On each side of the device we have airflow slots with metallic plates underneath that can slide to close down the openings. The plates are controlled by also having a slot above the spine with adjustment lever. The lever to the far left of the slot is the airflow fully closed and as it is moved to the right the plates slide open until the lever to the far right is fully open. I love the idea and execution apart from the lever although not as crude is like a nail head sticking out which both catches on clothing and can come quite sharp, really wish the idea was kept but a lower profile broader lever was installed. 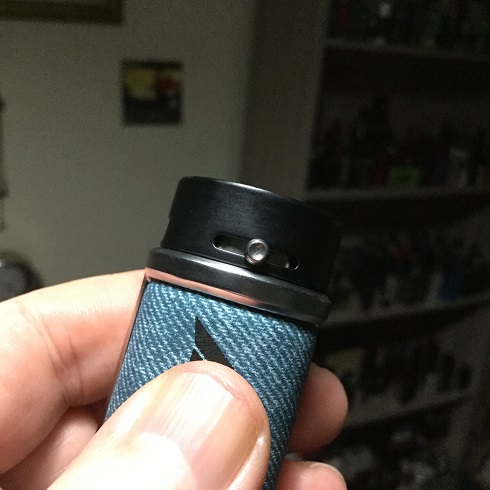 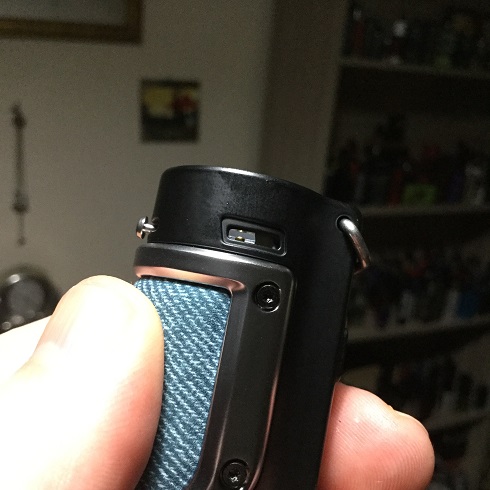 The Argus 40w pod mod is a very small device so granted it will have a small screen but i just feel even with it’s size the screen could of been just a little bigger making all information easier to read. The display is very basic but that’s all that is needed with this simple device and to be honest i can’t put my finger on it but i am just not a fan of the display and no, it’s not because it isn’t colour!

At the top we have a battery status bar in an horizontal position and then underneath the wattage. We then have a highlighted square to the left with either an “A” or “P” depending whether you have it set to press button fire or Auto Draw and to the right of this “W” for the unit watts.

We then have a line and underneath this line we first have the resistance followed by the puff count, during vaping instead of the puff count vape duration is displayed. 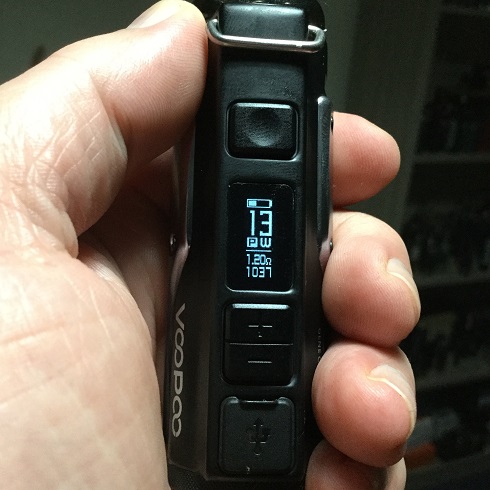 The Argus 40w Pod Mod is a very simple power only device that adjusts from 5w to 40w in 1w increments but doesn’t round robin. Also it is by default in smart wattage and seems this can’t be changed which gives a max wattage allowed depending on the resistance of the coil head so for example it only allows the wattage to be adjusted up to 15W with the supplied 1.2ohm coil while the 0.3ohm coil allows the full 40w.

We do also have a couple of combination button press features which are up and fire together locks the whole device so it also can’t be fired (5 clicks does that so again pointless), i only want to lock the navigational buttons!!! The other feature is down and fire together resets the puff counter! 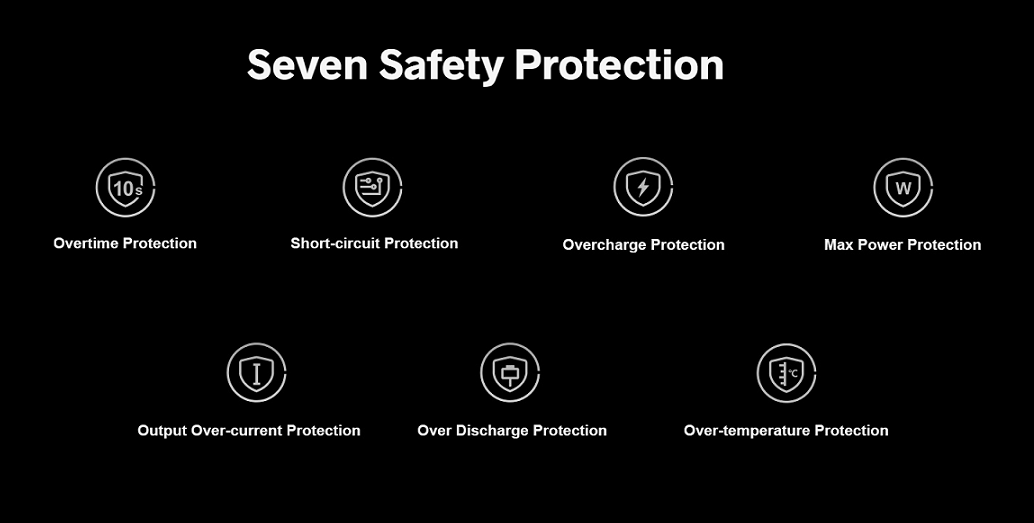 The Argus has a Type C USB which has a silicone plug to protect it from dust which isn’t a first for a non IP rated device but something i like and wish would be seen on more devices. During charging we have a charging progress bar and the charge is also given as a percentage. it doesn’t support pass-through!

The charge rate is 1A which is disappointing and means the device takes a couple of hours to charge! 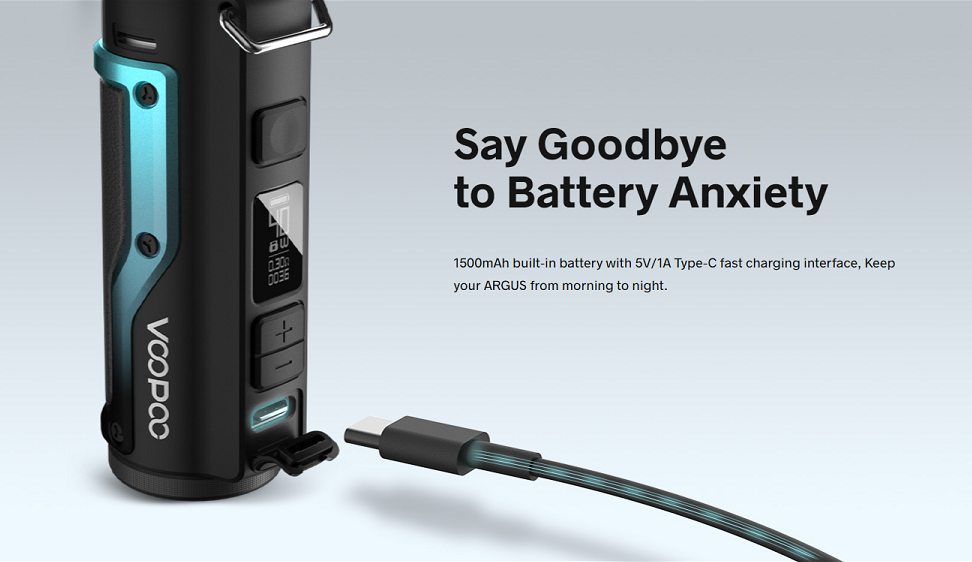 For those looking for a MTL PnP option then this kit with the PnP pod and included 1.2ohm coil head could be what you are looking for. I love the look and size and although because the airflow design on these Voopoo devices do suffer air leakage i needed the airflow fully closed which still allowed enough air to give a medium MTL to a medium loose draw but very smooth and great flavour.

I like that you receive both the standard and MTL pods and we have a Type C USB port with silicone plug. In fact i have really enjoyed using it because of the vape quality despite there being so much technically wrong.

So what’s wrong? First we have the Auto and press button fire modes yet when in Auto Mode the fire button still works although when press button mode is selected the Auto draw is disactivated as it should be. Next is the Auto Mode which when i had the airflow fully closed was very sketchy but once opening the airflow it struggled to work at all and this is not the first Voopoo PnP device that i have used which basically the Auto Draw isn’t fit for purpose. Next is when locking the device the whole device locks including the fire button when what makes sense is locking just the up and down buttons which isn’t possible. The next issue is the device runs in Smart Wattage which works well with the PnP coils and i actually like smart wattage as a feature but in my opinion any device with Smart Wattage should have the option to override it because if i was to use this with a rebuildable pod or coil head i might not be able to adjust to the wattage i require. Finally a couple of subjective cons which are i just don’t like the small display and the hook constantly jangling around gets on my tits!

I do like that the device has both Type C USB and that it is sealed but even here the 1A charge rate is too slow and it doesn’t support pass-through. The weird thing is despite having so many cons for this device i actually both love the look of it and the vape quality and flavour i have been getting is really first rate so a real mixed bag! Because i have used the 0.3ohm PnP coil head many times i have been using the device with the MTL PnP pod and coil head and it’s been the first Voopoo PnP coil head which has given me no leaking issues which is a big pro for me!!! As you would expect with a device with a Gene chip the device fires insanely quickly and performed excellently! 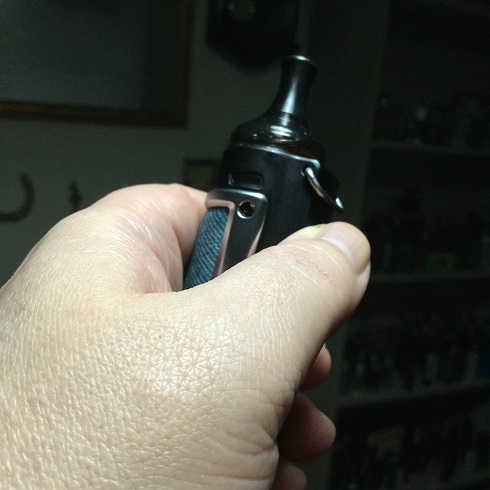 I would once again like to thank Ella from Sourcemore for supplying the VOOPOO Argus 40W Pod Kit for the purpose of this review, thanks for reading and stay safe!

It’s my theory in life. Do it, like you love it.