I have had a Vapouriz Fuse e-cig for a couple of weeks, and it has stopped working. The seller has given me a refund, but told me to dispose of the unit rather than return it. So, I’m wondering if there is anything that I can do to fix it; and if anyone here can help me with that?

The symptoms of the fault are: the battery is charged, but when pressing the button, the button flashes 15 times (this error code is undocumented in the excuse for a manual provided and the tech support seemed not to know what it means) and no vape is produced.

Vapouriz technical support first suggested that I had “used it too much”; when pressed, they decided that the button must be sticking and thus overheating the element and the over-time protection circuit was kicking in. This cannot be the case, because the same error code is flashed when the putton is pressed even when no coil is attached.

If I power it off; leave it for a while – a couple of hours works, 2 minutes doesn’t – then when I power it back on, it works. Once. Before reverting to the same error code and non-functional state.

Has anyone here ever managed to disassemble a Vapourize Fuse battery/control unit?

Am I wasting my time trying to fix it?

Welcome to the VC @anon79121637. I’m not familiar with that particular unit. It appears to be a disposable ?
If so, I’m not sure I’d risk tearing it down, attempted repairs unless you had NO other choice(s).

Welcome to the VC @Browseruk.
Thanks.

I’m not familiar with that particular unit. It appears to be a disposable ?
No. Not disposible. Tank, coils and battery all available separately.

If so, I’m not sure I’d risk tearing it down, attempted repairs unless you had NO other choice(s).

As explained, the seller has already refunded the cost of the item – though not the extra 5 coils I bought at the same time – and doesn’t want the unit back, due to the cost of collecting an item with a used LiOin battery.

So I have nothing to loose by trying to trying to disassemble and repair it.

So I have nothing to loose by trying to trying to disassemble and repair it.

To some degree yes, BUT, once you have a battery operated device that is malfunctioning, you CAN always be risking more serious issues, possibly even fire. If you do choose to attempt repair it, use caution, and keep an eye on it afterwards. Risking possible hazards and/or fire, may seem as exaggerated, but still a risk.

The seller has given me a refund

Hi @anon79121637 , welcome to VC! Was there an option to ‘replace’ your device with another? If not, I’d contact them again, and ask that the purchase price of those extra’s be refunded also!

Risking possible hazards and/or fire, may seem as exaggerated, but still a risk.

I built and run my own e-bike including a 48V Li-ion battery pack. I’m familiar with their risks.

The first problem is working out how to unscrew the cap to access the internals of the battery/control unit.
I’m pretty sure that the smooth shiney bit at the top with the 4 slots unscrews from the threaded bit below along (wobbly) red line. 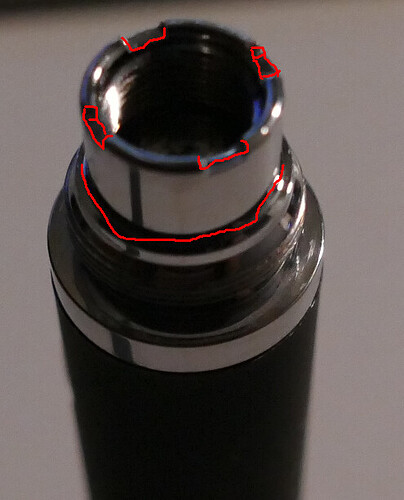 The only safe way to get a purchase on the main body would be to make an adapter to screw onto that threaded lower part, and if anyone here had done this, they might have suggestions on what that tool should look like. Ie. What size/pitch is the thread; is it normal or left-handed; how are the wires/circuit board underneath attached etc.

If not, i’ll just have to work it out for myself.

The other thing I need to do is purchase replacement(s); and for that I’d liek to get some advice; but presumably that should be in another thread

Was there an option to ‘replace’ your device with another?

Yes. but having had two – one for 6 weeks, the other for 2 weeks – and have them both fail in the same, undocumented (to me or it seems to the “manufacturer” (badge-er)) way, it seemed wise to cut my losses and look for something better, more reliable.

That is my other reason for joining the forum here.

No pics in this day and age. Geez

an adapter to screw onto that threaded lower part

Are those the thread’s to which the tank mount’s? Do you have a tank that your willing to sacrifice? You would have to(carefully) break the glass away from it, wrapping it in a rag first, to collect the shard’s, and save the metal threaded part. There’s your purchase!

Are those the thread’s to which the tank mount’s?

There is an intermediate adapter between the tank and the battery unit (mod?)
The coil screws into the adapter, then the tank screw onto the same piece over the top of the coil.; and the whole assembly attaches to the mod. 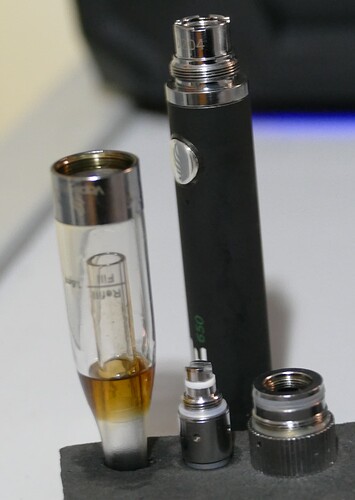 The problem is, with that adapter in place, even without the coil, the bit at the top of the mod (with the 4 slots) is complete obscured 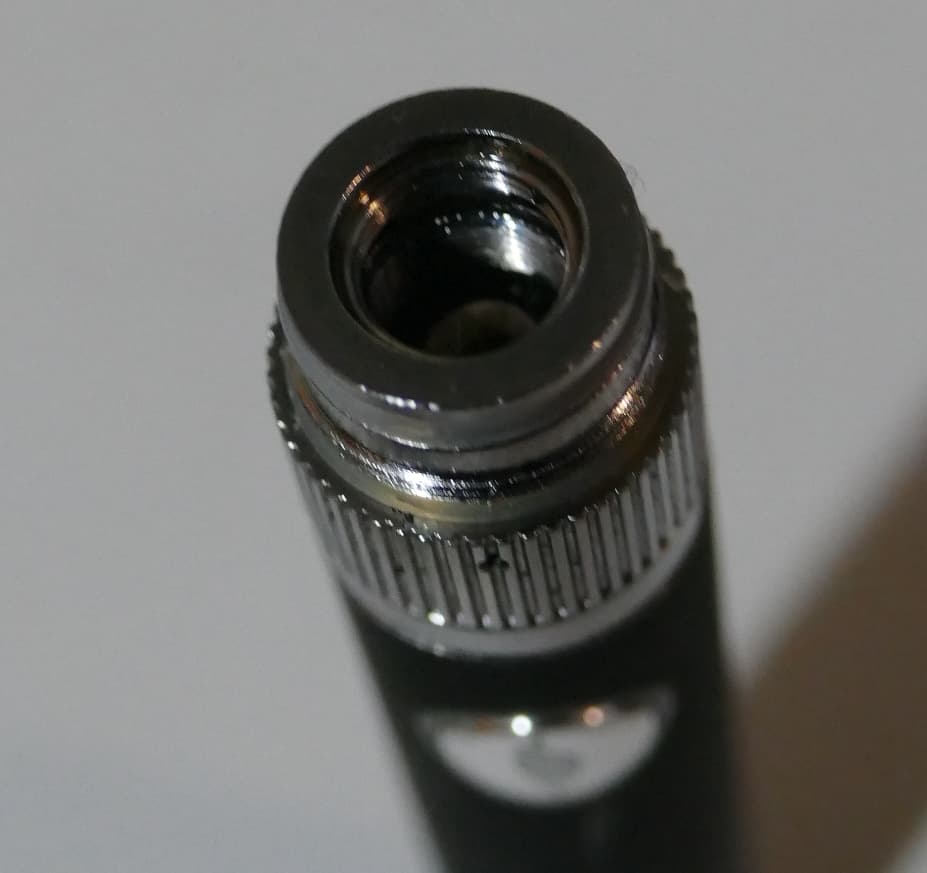 and there is a lip inside the adapter that bears down on the lip seen just above the thread on the mod.

I guess I could hacksaw the top off the adapter, but I’d rather work out what thread it is and put a matching thread in a piece of bar that I could then put in a vice.

The thread measures 12mm diameter, and my best estimate of the pitch is 0.75mm. Such a thread is defined in the iso standard, but the preferred pitches for M12 thread is 1.75/1.25mm, so no standard nut or tap is going to work. Then again, it could equally well be some weird BSP pipe thread.

Looking at the tank assembly on Amazon, they look very similar to these which are described as having a “510” thread; which despite nearly 50 years as an engineer, I’d never heard of.

Turns out (as many here will probably know), that means 10 turns of a 0.5mm pitch thread, which is a bloody weird way to desinate a thread. Anyhow, that turn out to be referring to the 7mm dia thread on the coil inside. (M7x0.5 also unheard of in engineering circles.)

Researching “510” threads, I came across this image: 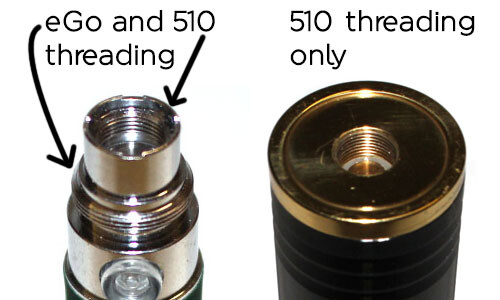 Which led me to this explanation:

All of which leaves me with the strong feeling that I shouldn’t bother with attempting to disassemble the thing. Just bin it recycle it and move on.

Which briings me to: As you appear to be a regular here; where is the best place to ask about what I should buy as a replacement?

I could hacksaw the top off the adapter, but I’d rather work out what thread it is and put a matching thread in a piece of bar that I could then put in a vice.

Guess it all boil’s down to how far you want to go with this thing. My opinion is…if it was put together, then it can be taken apart! I enjoy figuring thing’s out, apparently similar to you

If this is any inspiration to you, it took quite awhile to find this tap, but I did, and was able to make a 510 threaded tank rack. 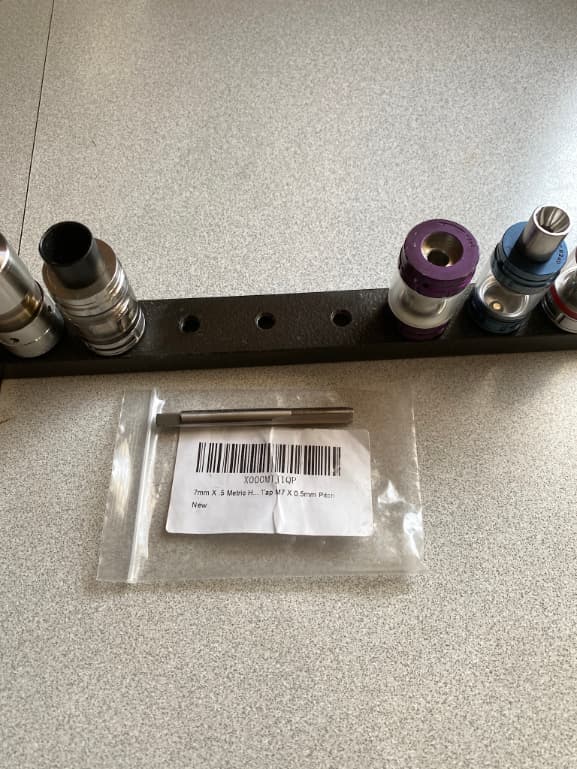 If your ready to ‘bin’ it, then I would suggest our very own @Timwis whom has done many, many recent review’s on a range of device’s, @anon79121637
Look here…Good luck!

Reviews will be split up into their respective sub-categories for better accessibility.
You could use [REVIEW] at the start of your title if you want.

Those Ego Units just don’t last long at all, you can get lucky and have one that lasts six months but battery life will noticeably get worse the older it gets but on average 6 weeks is about right and buying one that is dead out the box isn’t unusual, as well as being quite crudely made they tend to hang about in warehouses sometimes for a couple of years before even getting into shops etc.

For the record the main tube just is pressure fitted to the top metallic section with threading, many a person has sat on one to end up with the two sections separated hopefully with wires all still attached so they can be pushed back together!

If this is any inspiration to you, it took quite awhile to find this tap, but I did, and was able to make a 510 threaded tank rack

I will PM you, staying on those Ego style devices will frustrate you back to smoking. I can sort you out with just a step up and then I would keep active on forums taking in all the info, reading reviews etc and this time next year you will probably be using RTA’s on external battery mods giving advice to others, that’s the great thing about forums!

The unit is actually brand named Vapouriz Fuse; but looking at the eGo units they are almost identical. Certainly interchangeable.

I guess that it is a aaa size battery inside?

So, whilst I have your ears. What to buy to replace it?

I’ve read some of your reviews, but many of the details that go beyond the simple tech specs, go right over my head, or just seem … um … esoteric. (I’m new at this; maybe they’ll make more sense to me later.)

The e-cig I’ve used had convinced me that I can vape rather than smoke; and I am quite desperate to buy a replacement. I bought some 20mg tobacco flavoured ‘salts’(?) and found that this was sufficient to sate my cravings.

Things I think I know:

Top fill is a must.

Based on my limited experience with a 650mAh battery and a 1.6Ω coil, I need at least 2Ah and I think more power to save me having to double toke to get a descent hit.

I’d like a bigger than 2ml tank; but cannot buy that in the UK. (Maybe I could import one or two from the US? Or I think I read somewhere that people are 3D printing their own?)

I tried dtl a couple of times. I don’t see the point.

I’m not sure why I would need IP67 waterproofing?

I like the idea of re-coiling my own coild to save money.

I can’t honestly say I yet understand the “taste” issues people seem to have; but then my non-smoking wife never understood why I couldn’t smoke cigarettes rolled with the pipe tobacco she bought back from an overseas trip once.

I’d very much like to buy a mod that is not going to break down or otherwise need replacement 6 weeks, or even 6 months from now. (Retired early, pensions not yet kicked in.)

I have messaged you mate!

As far as the TPD 2ml regulation it really isn’t policed and mostly ignored pretty much any tank you can buy online in the UK as standard version, example my last purchase was the Bishop RTA i bought from Naturevape which is a UK site and they sold both the 2ml and 4ml standard option, i bought the 4ml!

A mod worth considering (you can now just buy the mod rather than the kit) is the Innokin Coolfire Z80! Will then need a couple of 18650 batteries so you always have one charged and an external charger, but you can charge in the mod for a while and buy the charger a bit later!

Then if you really are considering using pre-wound coils which i believe is the best option for both getting the best flavour and for economic reasons then either the Glaz Mini or even the Bishop with a bell cap to give it top-fill would be good options! Both excellent RTA’s but not difficult to build and wick in fact the Bishop is idiot proof and my favourite RTA but don’t read too much into that!