XROS is a unique vape that brings you an unparalleled customizable experience. 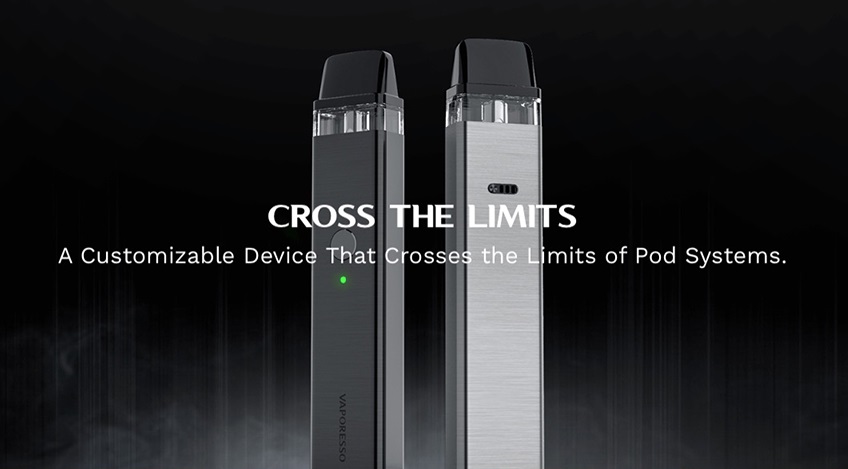 Vaporesso of late have tried to have up to date products in most sectors of the market which hasn’t seemed to of spread them thin as they continue to impress with pretty much anything they release. The XROS is a product aimed as a Caliburn competitor but offers much more for new vapers and MTL vapers. The XROS offers in my opinion the best Adjustable Airflow on a pod device not just in design but also in performance. With top-fill, 800mAh battery, Type C USB, Auto Draw or button fire operation and a clear in view pod to see your juice at all times, let’s have a look at the new King of the simple pod devices. 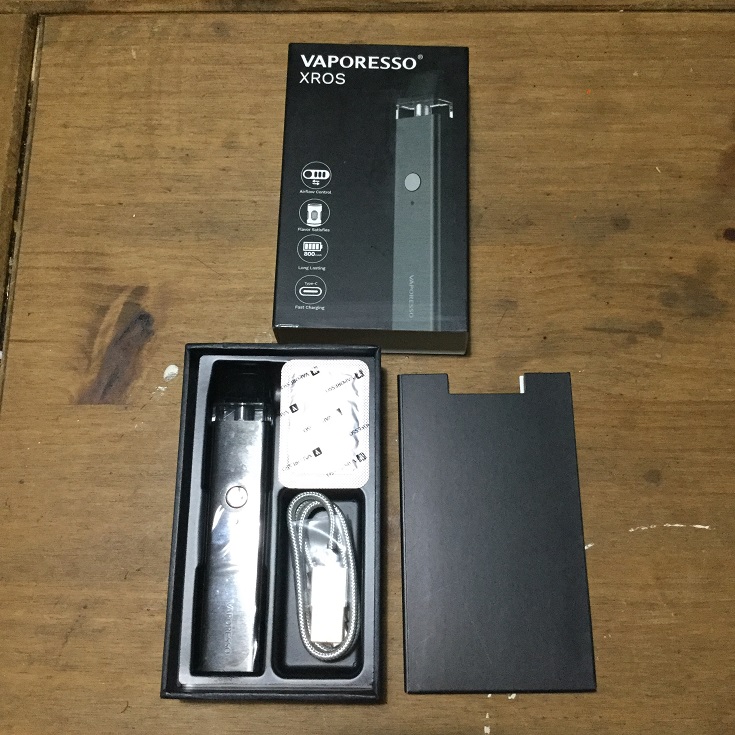 The XROS came in simple cardboard packaging and on opening i found i had received the Matte Grey version, it’s available in Silver, Matte Grey, Blue, Sky Blue, Rose Pink or Rainbow.

The device has a Stainless Steel construction and has a very straight lined form factor yet due to it’s size is still very comfortable to hold and fits in any pocket when not in use. The XROS has quite a minimalistic look with any branding being quite understated although mine has “Sample” printed at the bottom of the rear. The clear pod protrudes and we have a Clamshell plastic mouth section, on the face we have a slightly protruding smooth metal round fire button with an LED a few mm’s below. On the rear we have 3 airflow slots with small round lever for adjustment, moving to the base we have a plastic section with a Type C USB port positioned centrally. 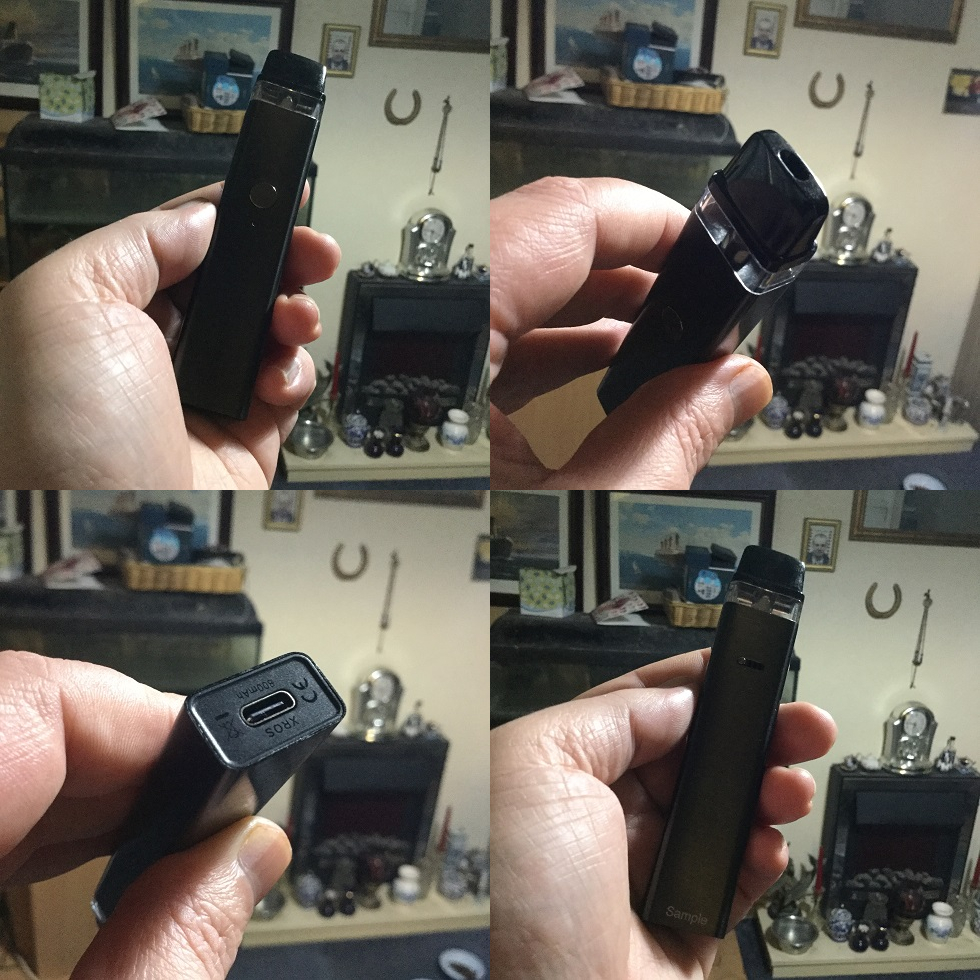 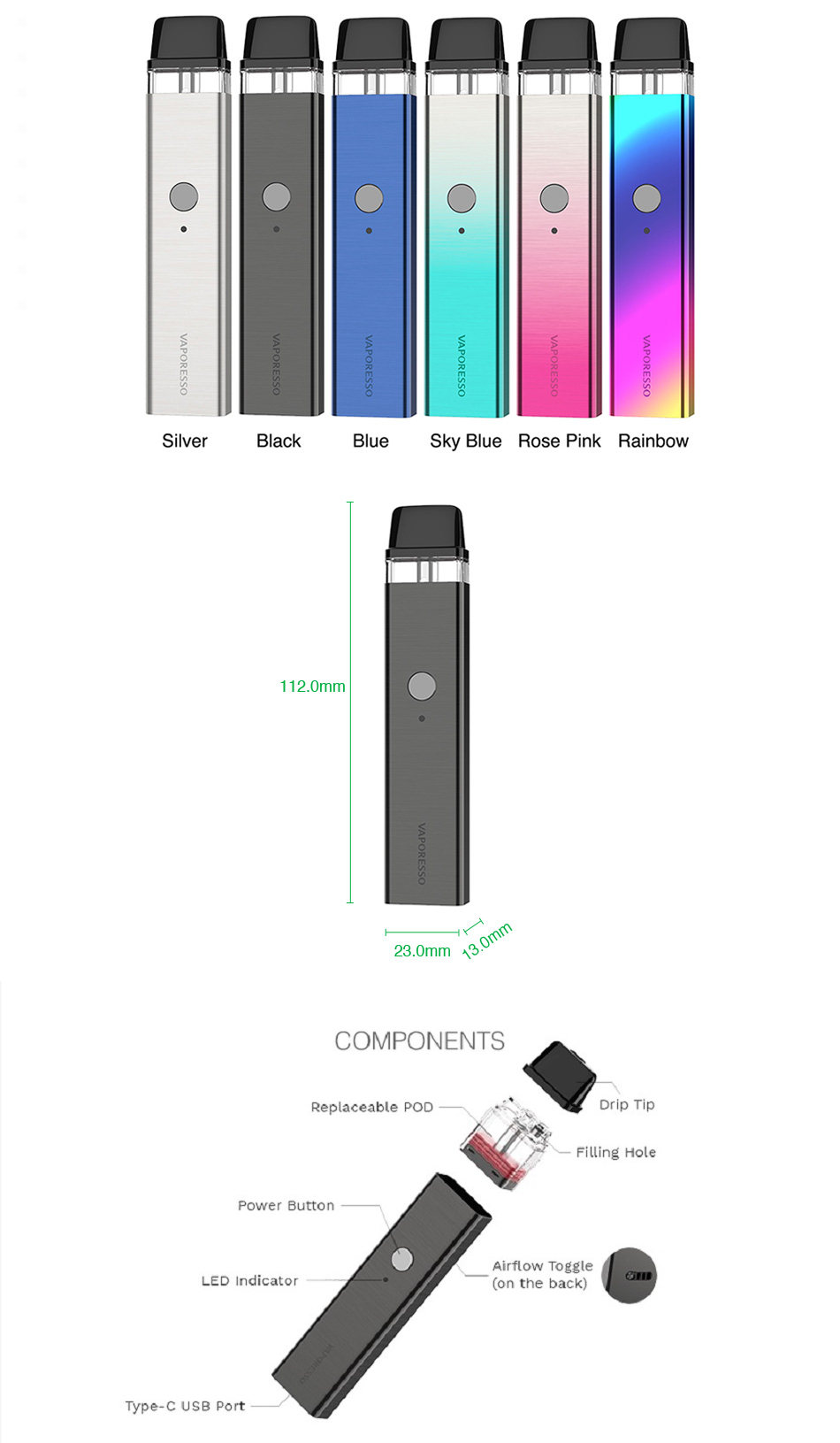 This of course is just my opinion but rather than keep comparing the devices during the review i will get it out the way here. The Caliburn was possibly the first simple Pod device that vapers took real notice of realising such a device can actually hold it’s place in the mainstream market place rather than just being (yet another pod device). The Caliburn is still a very good device and it became a benchmark which meant other manufacturers needed to up their game but things have now moved on, so my take on comparing the two devices is this:

The Caliburn is slightly smaller and the Auto Draw works flawlessly while the first XROS i received the more the airflow was open the more the Auto Draw struggled although i received a replacement device which didn’t have this issue.
The XROS has not just adjustable airflow which the Caliburn hasn’t but possibly the best adjustable airflow system on a pod device. Also the main pod section is clear and protrudes outside the device giving perfect visibility of the juice level. It has a bigger battery and even when it comes to flavour in my opinion the XROS edges it but that is marginal.

All things considered the XROS beats the Caliburn hands down and maybe for vapers that like this type of device it’s time to realise there’s life beyond the Caliburn which has now seen it’s days as the benchmark come to an end. R.I.P 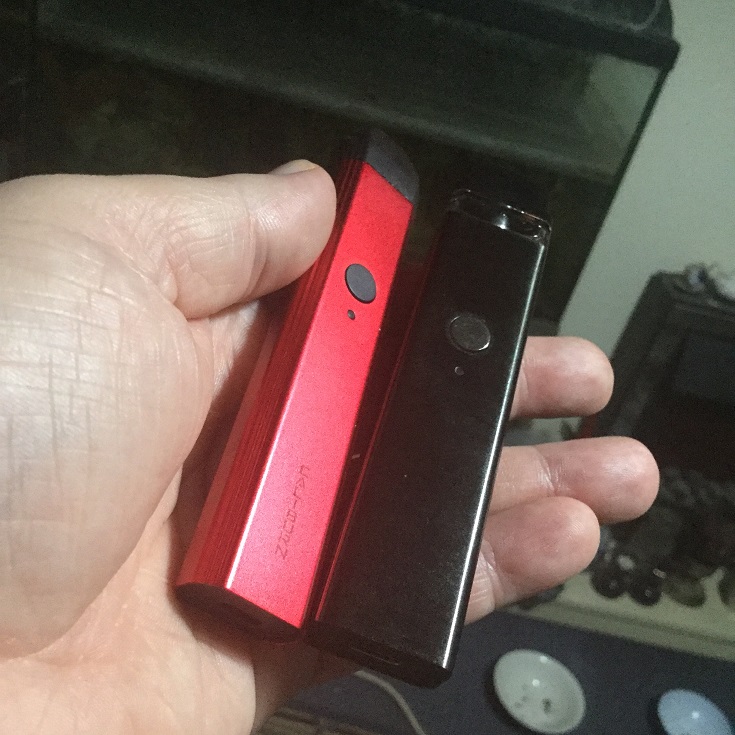 You receive 2 different pods one of which houses a 0.8ohm mesh coil which is identified by the pod having a Red band although the specs are also printed on the pod base and a pod with Black band which houses a 1.2ohm mesh coil. Not being able to replace the coils but needing to replace the whole pod will be a con to many although the price difference between just buying coils or little pods with fitted coils isn’t that great really so some might just prefer the convenience. 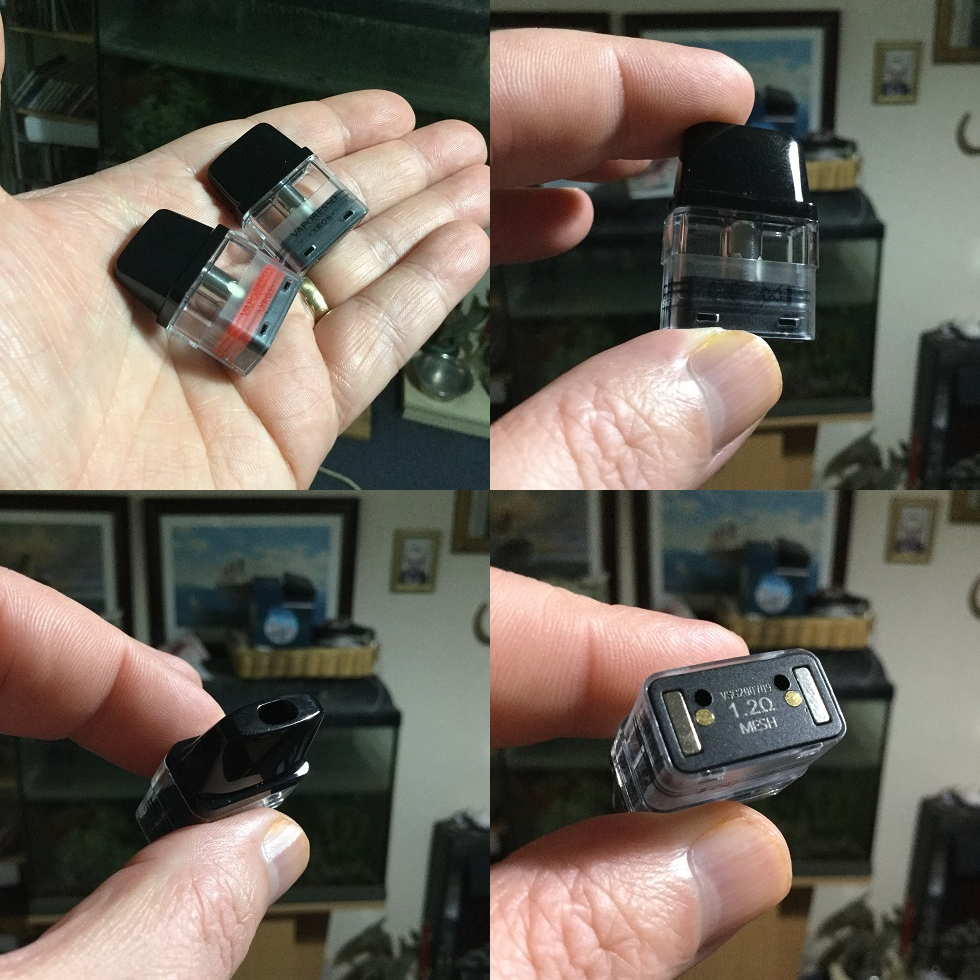 The Clamshell mouthpiece is easily removed by a pulling while turning motion which reveals to one side a self sealing fill port and a small air pressure release hole the other side, i had no issues with filling quickly and mess free and is fine with standard Gorilla nozzles, the mouthpiece just clicks back securely in place. 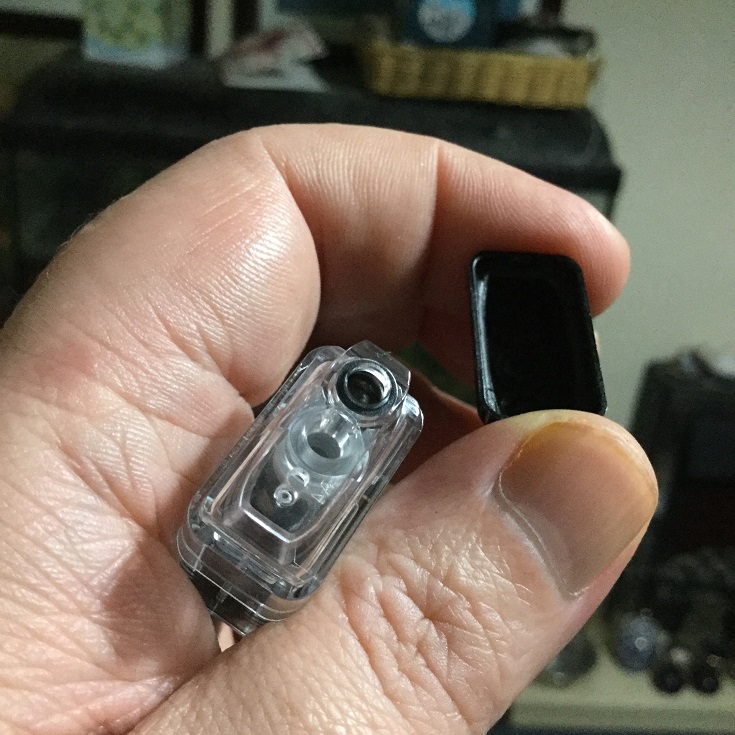 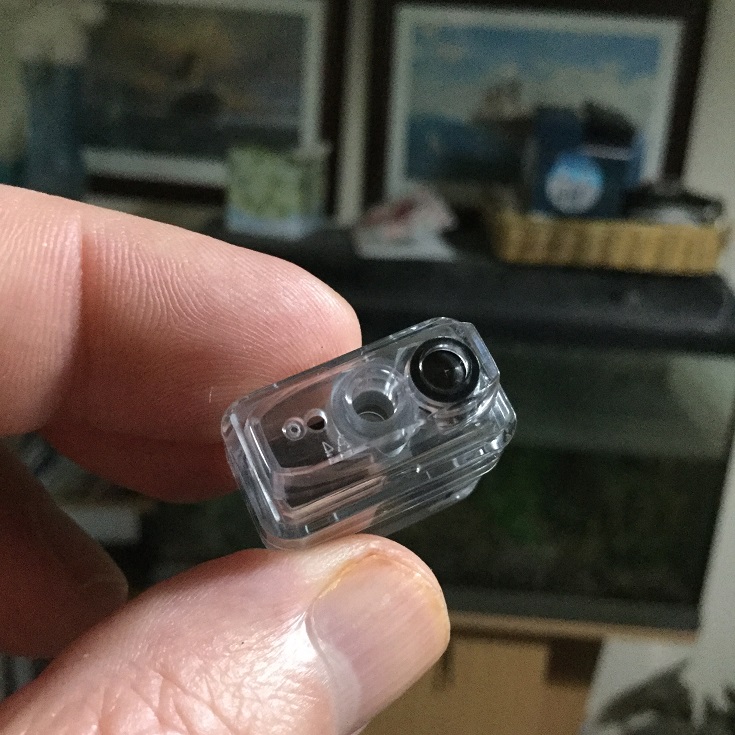 Looking at the base we have the printed specs central and to either side contacts and holes for airflow. To the outer edges we have a strong magnetic strip and finally the capacity is 2ml. 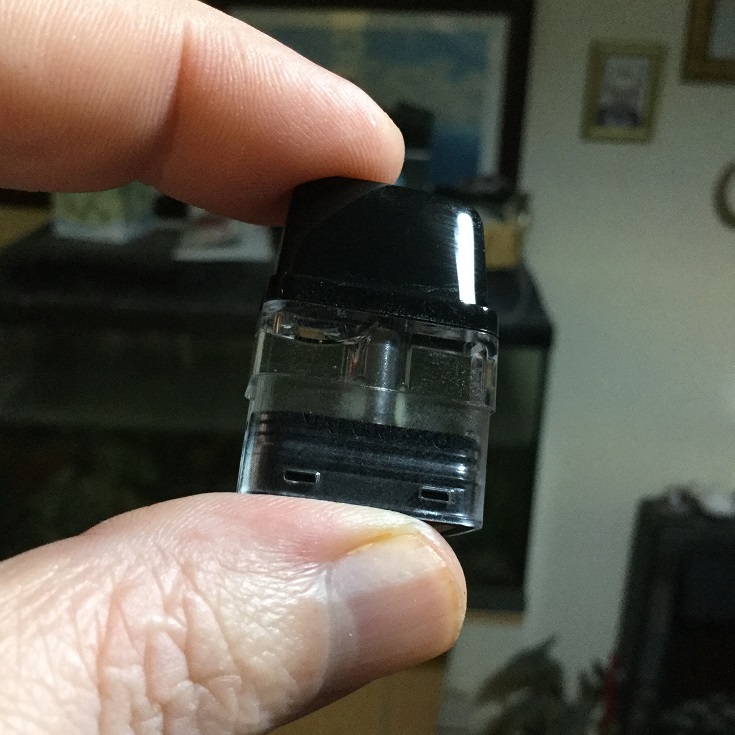 Looking inside the pod bay we can see the outer magnetic strips which line up with the ones on the pod and also clearly visible is the 2 Gold plated, spring loaded contacts. We also have the raised airflow intake which leads to the membrane switch and side by side square inlets for the airflow system. The pod fits very securely with no movement unless you really make an effort pulling the pod about, so none at all during normal use! 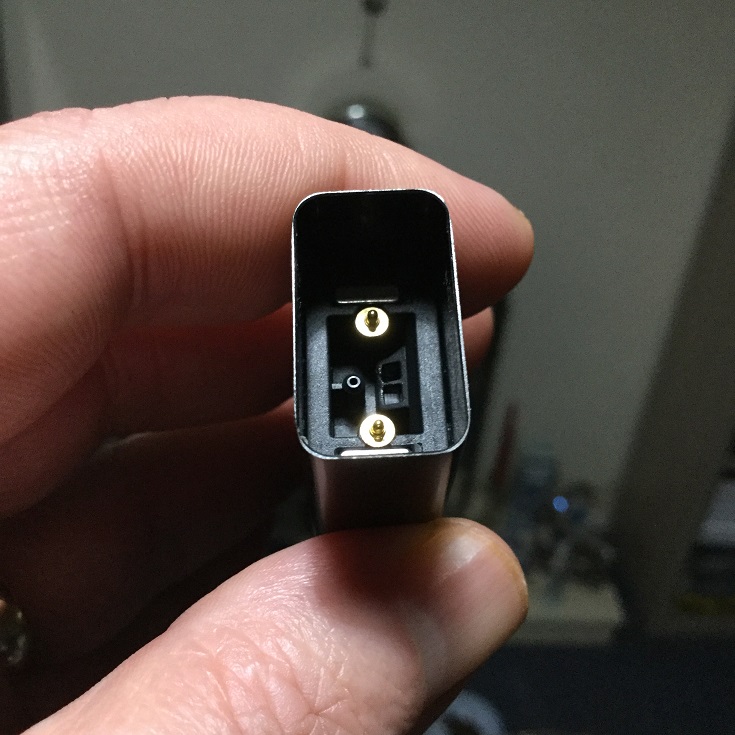 I love the airflow design on the XROS which is a slot on the outer casing and then underneath a sliding piece that has 3 small vertical slots with a small round lever which can be used to slide the slots open or shut. It’s a similar lever design to on the Drag X/S but much better implemented as it’s a much lower profile so doesn’t catch on things like the lining of your pocket. A small amount of air does get to the pod with the airflow completely shut giving the choice of 0 slots, 1 slot, 2 slots, 3 slots or even part slots open so for example just half a slot or 2 and a half slots.

Having a Physical button also allows the device to be shut down and it’s 5 quick clicks of the button to turn off and again 5 quick clicks to turn back on, both actions are confirmed by the LED cycling through Red, Blue and Green. Once on you can either vape using draw activation or use the fire button which overrides the membrane switch and That’s it!

The device does have battery status indication which is just 3 tiers but nicely spread out. When taking a vape with either draw activation or using the fire button the LED shows the battery level by what colour it lights which is the following:

You can see the LED while vaping but also can check by just pressing the button very quickly but make it as short a press as possible because the device fires instantly! The LED also flashes different amounts of times in various colours to alert if any safety protections have kicked in! 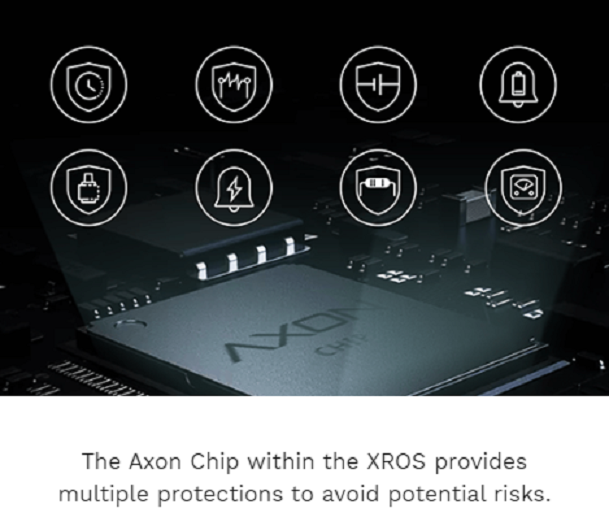 I am pleased to say the XROS has a Type C USB port and 1A charging allowing the device to be fully charged in about 45 minutes while supporting pass-through.

I have actually had the XROS for weeks but had an issue with the draw activation when the airflow was wide open so have been waiting for a new one to confirm it was just a faulty device rather than an issue in general. The new one works great and as that was the only issue with the first one i received i was still able to test the device while i waited and it has now become the device i have a vape on when i first get up with some 10mg nic salts before moving on to other devices.

The airflow really impresses me with 3 slots open giving a choice of a very restricted DL of very loose MTL while 2 slots open gives the exact same draw to the Caliburn. One slot open gives a medium MTL draw while closing the airflow completely still gives a very smooth draw but now very tight, of course part slots can be used for even more precision so for example half a slot gives a medium tight MTL.

The bores on both coils are the same so identical draws but with more power going through the 0.8ohm coil this gives a warmer vape although both give decent warmth with just the 1.2ohm pod being slightly on the cool side with airflow fully open. Now i have the replacement i can confirm the Auto Draw works great although when i have the choice i always tend to use the fire button option, just habit i suppose and for no other reason.

It’s not the sort of device that i personally use as my main device even when testing so can’t give specific vaping time with a single charge but even how i used it i could tell the 800mAh battery life is better than it sounds as it was ages between charges, it just seemed to keep going. When you do need to charge having Type C USB, charging in 45 minutes and supporting pass-through are all pros!

Not being able to just swap out the coils will be a con to many although the advantage of these sealed pods is i have had no leaking whatsoever, i also love them being top-fill and that the juice level is visible at all times. The device gives 11w with the 1.2ohm pod and 16w with the 0.8ohm pod and i assume that’s constant output as i haven’t noticed any drop off in power as the battery drains.

Finally absolutely no complaints about either the flavour or longevity of the pods, again hard to be specific because it hasn’t been my main vaping device but even when testing the replacement device i am still using the original pods that came with the first device and they are still giving bags of flavour! 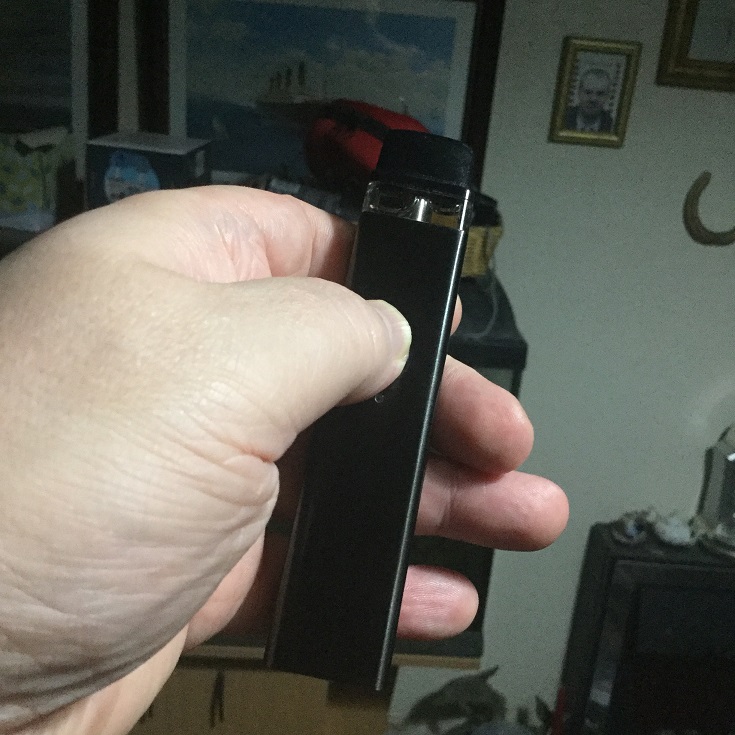 I would once again like to thank Jessica from Vaporesso for supplying the XROS for the purpose of this review, thanks for reading and stay safe!

XROS is a unique vape that brings you an unparalleled customizable experience.

Yep, not what i would use as a main device but many do use these small pod devices religiously, sales prove that! I certainly would of preferred this rather than a disposable clearomiser on a 400mAh ego battery back in the day!

I certainly would of preferred this rather than a disposable clearomiser on a 400mAh ego battery back in the day!

Hehe, I still have a massive stash of Boge LR Cartos, and still use them in my Phiniac Tank.

Lol you must of got a truck load!

I MIGHT have a hoarding problem, … especially for things that work pretty good, hehe.

Nice review Timwis, thanks for sharing it man

Yeah from comments on a couple of forums and Reddit it seems the 0.8ohm pods are a bit inconsistent with some like me having no issues while others if taking more than a couple of draws in quick succession can get e-liquid in the mouth but again those that have that issue are between them quite inconsistent to how bad the problem is!