A review by yours truly would not be a proper review without a disclaimer:

Vaporesso Skrr-S was sent to me by Vaporesso for product testing. Despite this fact, this review will be as impartial as possible.

This tank is for now only available bundled with the limited edition Luxe ZV. I believe it will be available in stores in a few weeks (or less) 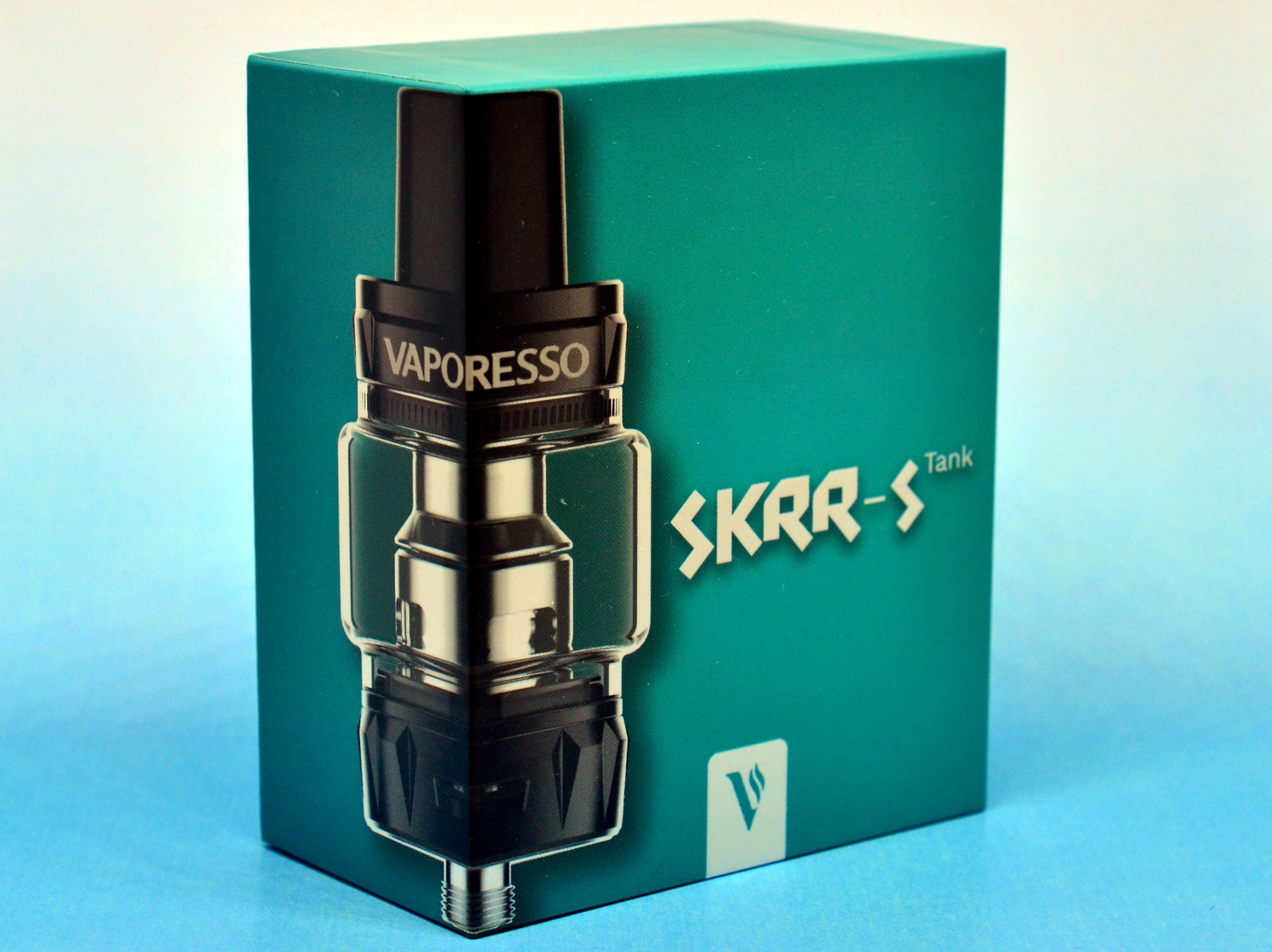 Vaporesso Skrr-S is the new incarnation of the tank that was released around October 2018 – The original Skrr tank. I never had the chance to check out the original version, but I did read a bunch of reviews, and the consensus was that the tank is nice, but it has a few annoying features, mainly the proprietary drip tip, and the coils didn’t get the best review either. I don’t know if this is an attempt to fix the mistakes, or just a redesign, but let’s dig in and see what this tank has to offer.

If there is one thing Vaporesso does good (beside making very nice mods and tanks) it’s their packaging design. My Skrr-S came in a very pretty blue/green box. I’m not 100% sure whether I got a pre-release version, or the final version, but the box didn’t have any means to authenticate the product. I don’t really have concerns about this one since I got it directly from Vaporesso, but I always look out for the authentication codes. 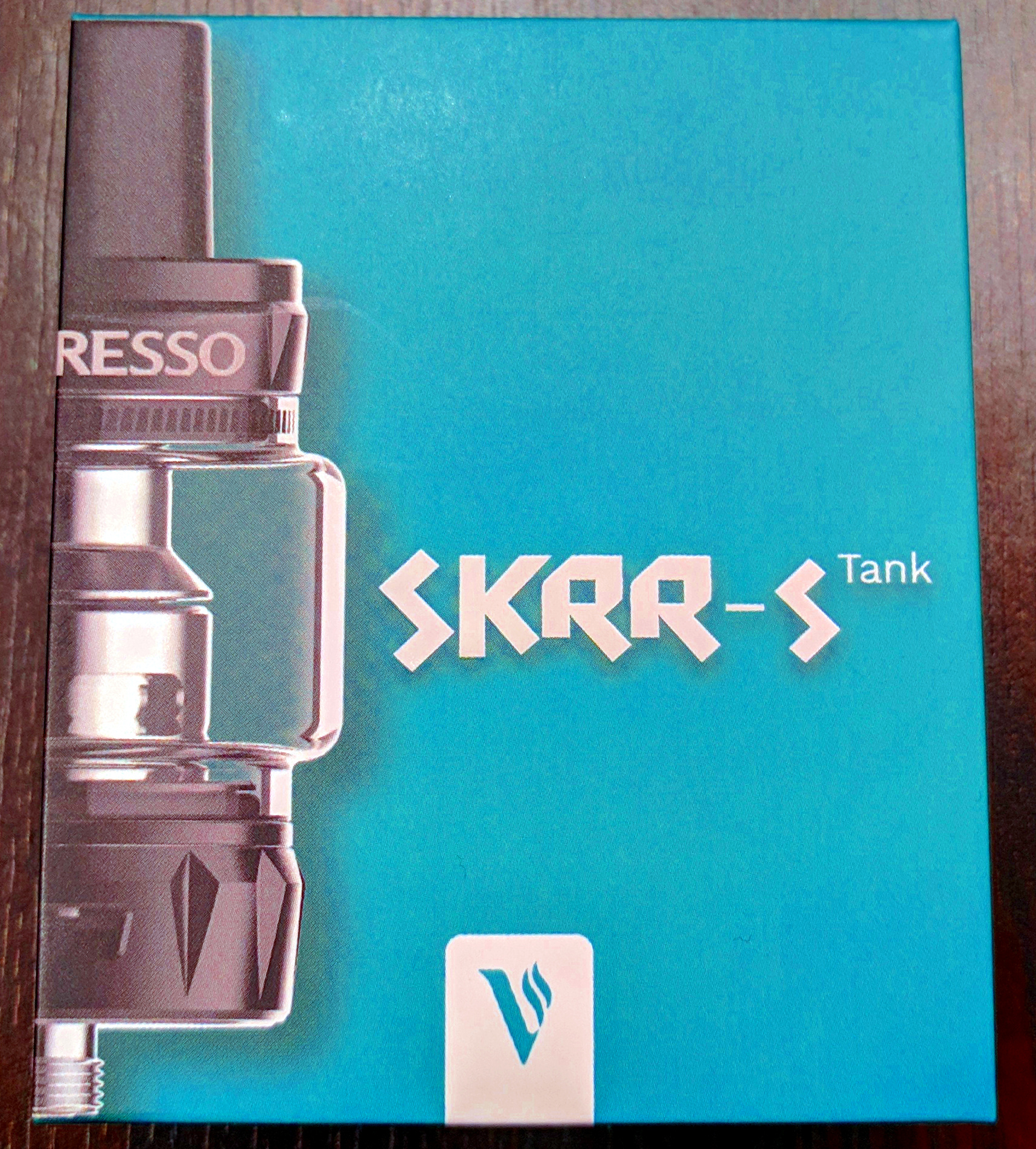 Back side of the box has the usual information we would expect to see: 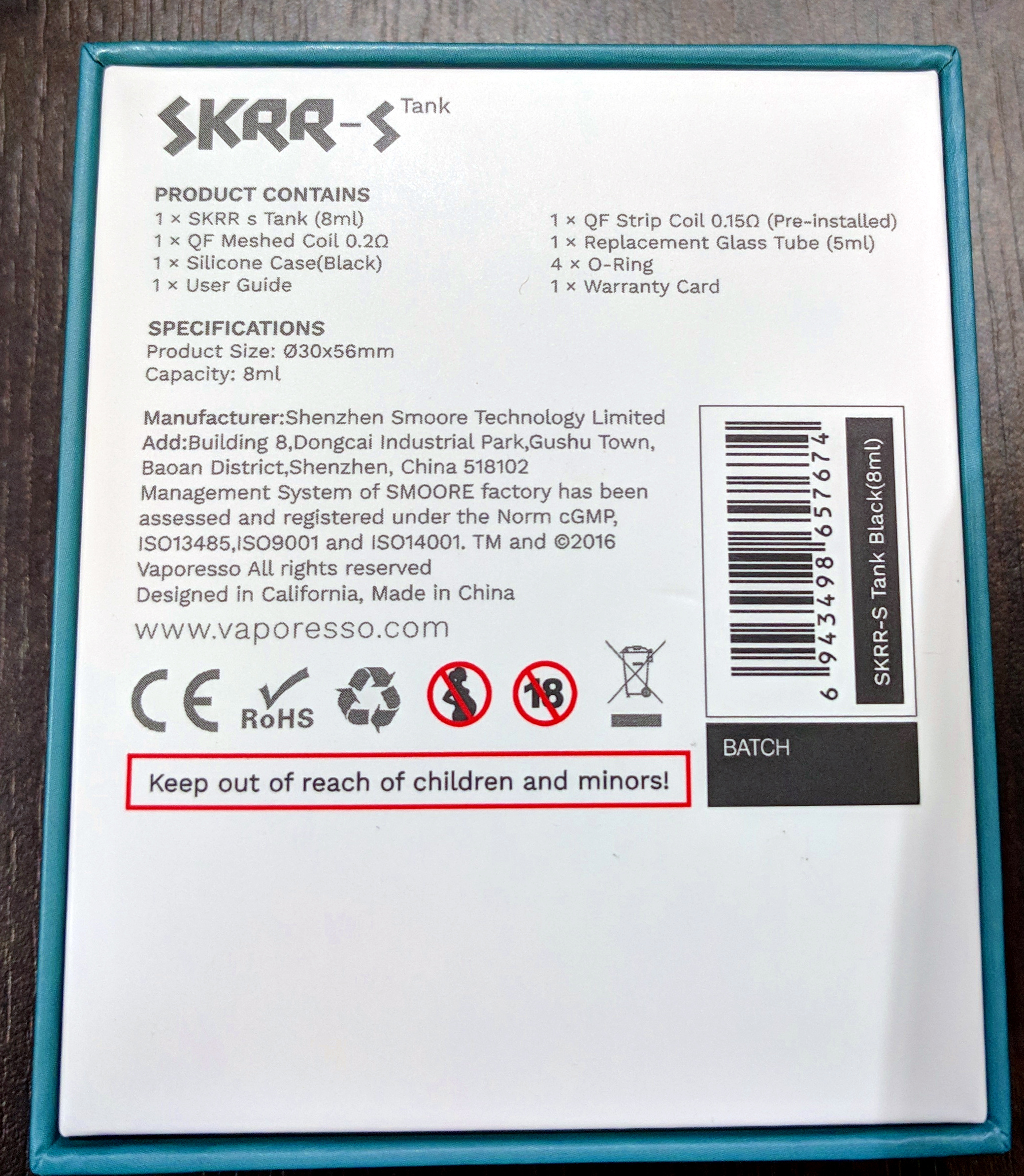 Inside the box was the main prize. Skrr-S tank, one spare coil, and a spare straight glass. 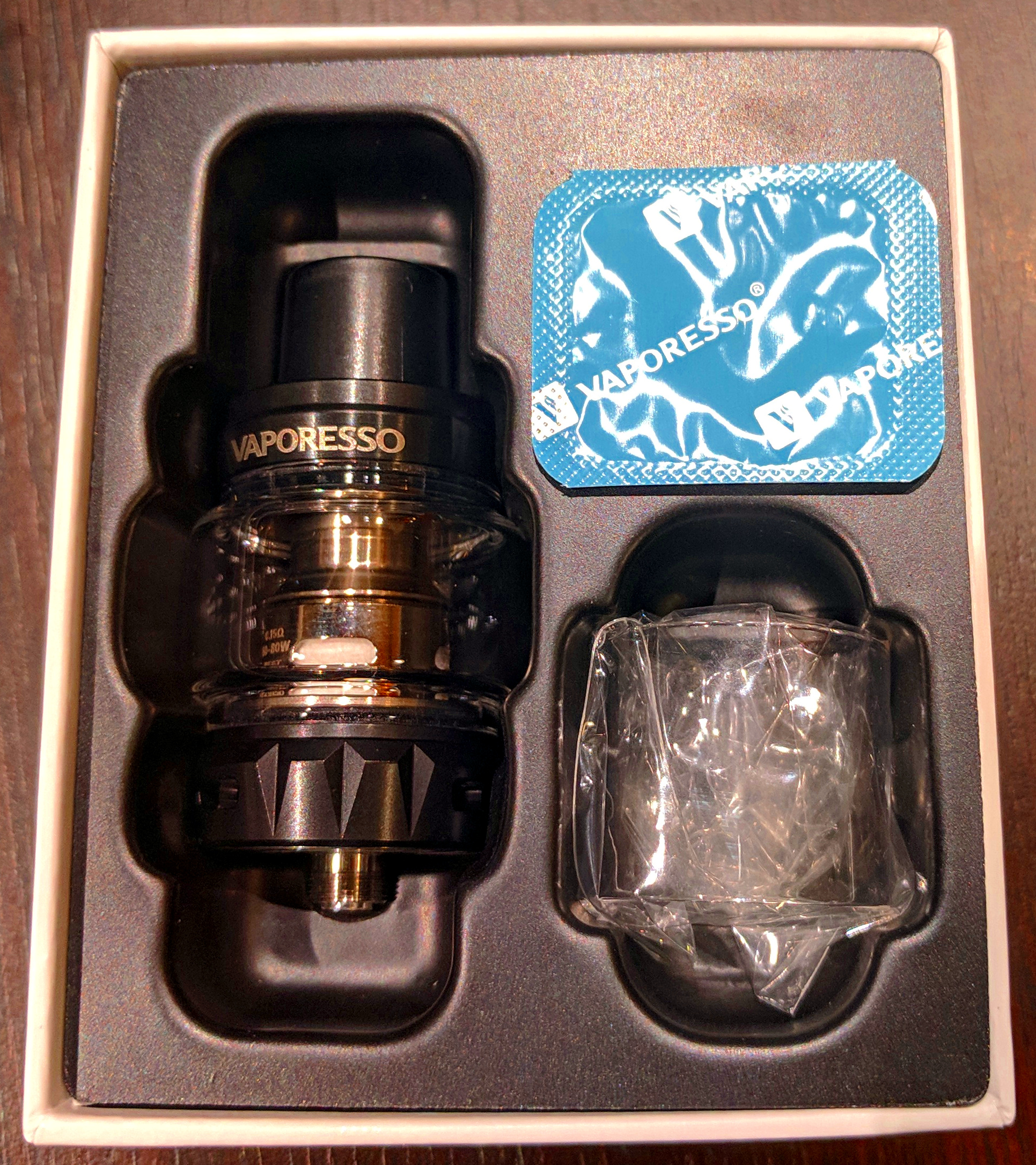 Underneath the plastic that holds it all in place was a plethora of colorful o-rings, and the huge tank protector for the bubble glass. 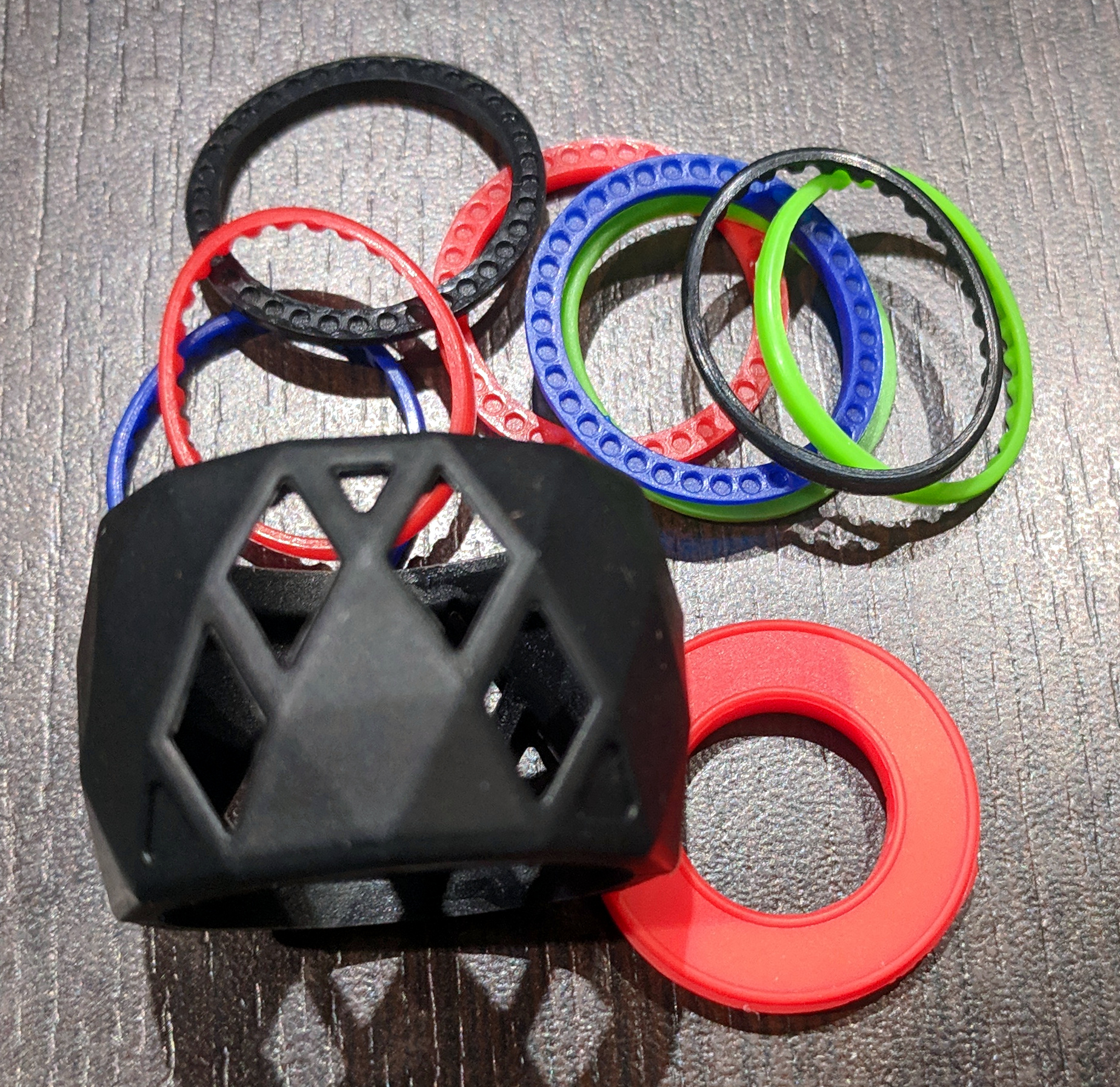 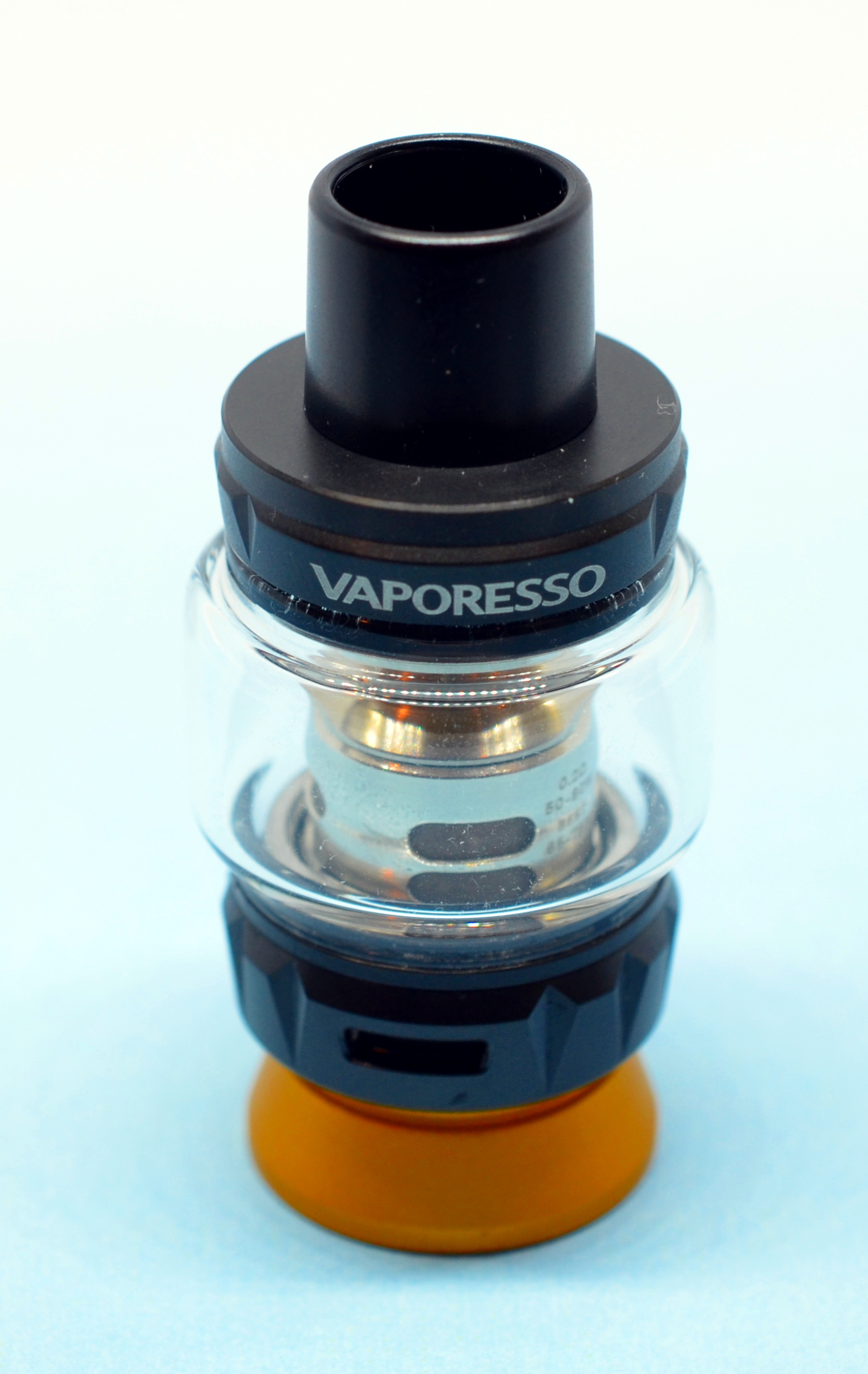 Vaporesso Skrr-S is most likely constructed of stainless steel, with some aluminum parts (airflow ring, and the top cap cover). I say most likely since I didn’t find any official info on it, and I’m going with my gut here

The machining is immaculate, all threads are smooth, and all parts fit very well together. 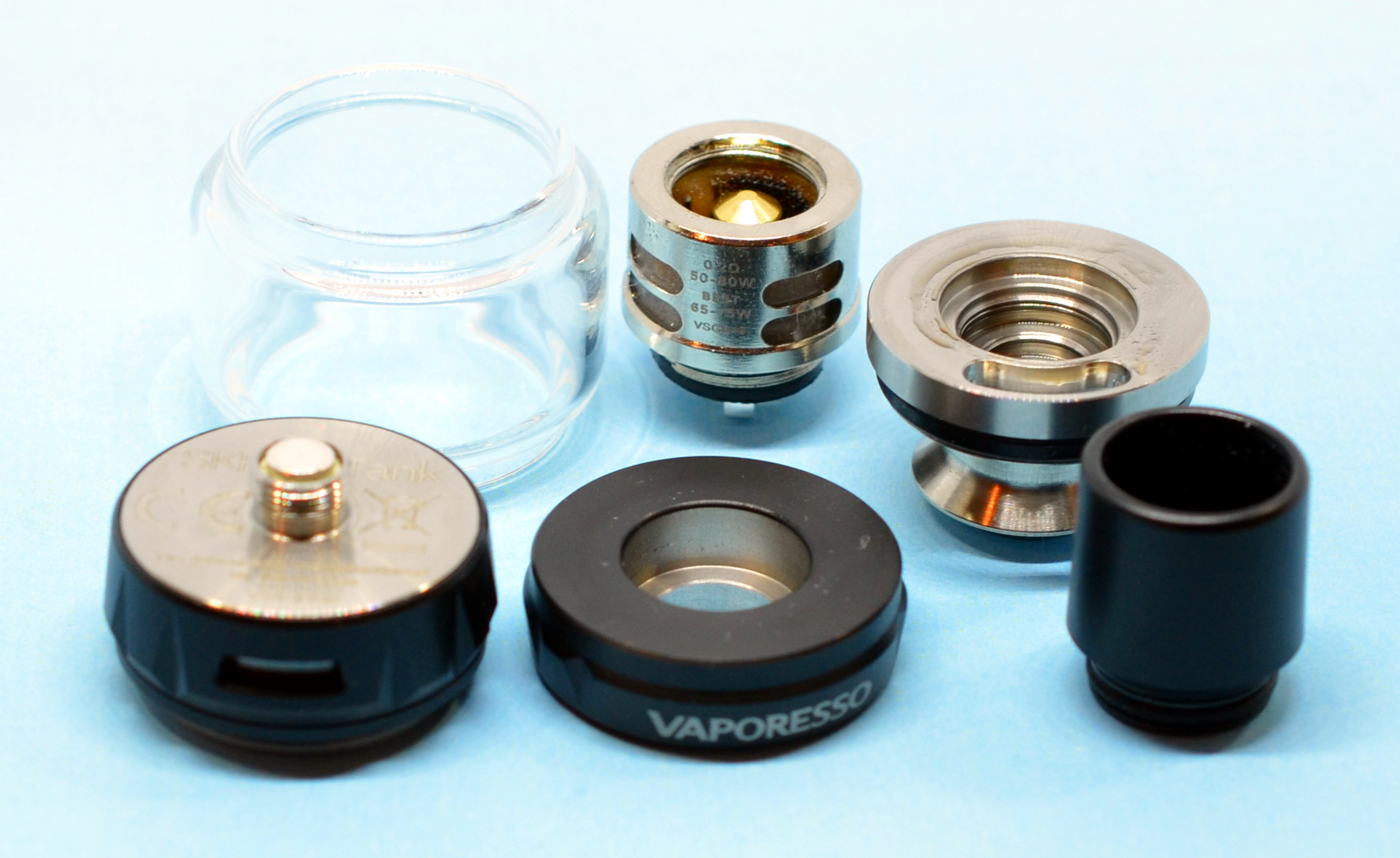 The top filling port is a bit small for my taste, and it has an interesting angle to it. Not the most comfortable when working with chunky gorilla style 120mm bottles. 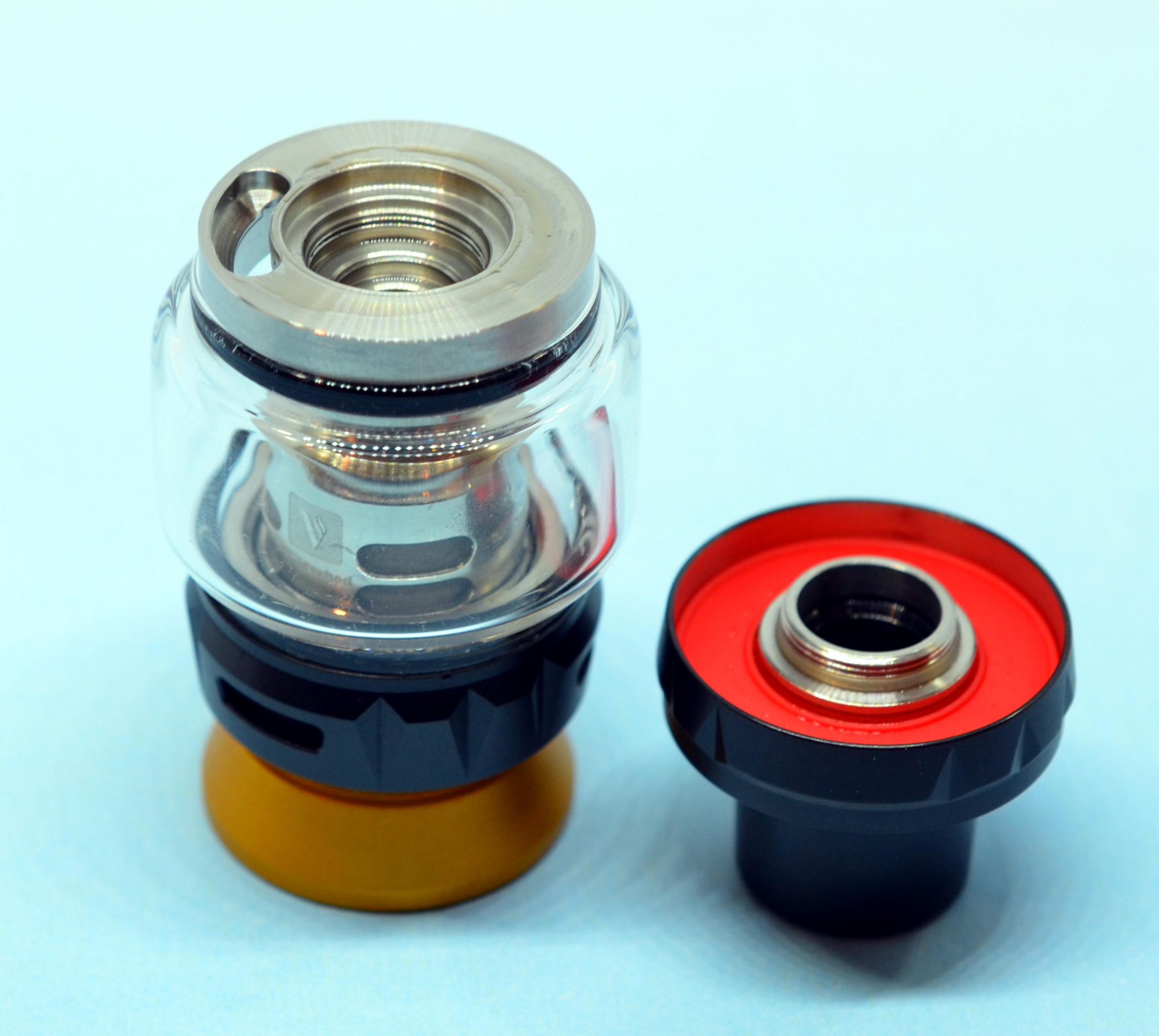 The tank comes with only one 810 dip tip which might be a bit too tall for everyone’s taste, and there is no 510 adapter. Overall impression is that of a high quality device.

Two coils that came with the tank are from the QF coil series. Pre-installed coil was the strip, and the spare coil was the mesh. I started the testing with the strip coil. It clocked at 0.15 ohm, and the recommended wattage is 60-80w. Considering my previous experience with sub-ohm coils, I primed the coil, and started way lower than the recommended wattage, to break in the coil. At 40w I got some vapor but no flavor at all. At around 55w I started getting flavor, and at 65w the flavor really started to develop. Until I finished the first tank, the flavor wasn’t much to brag about, but after that first tank it got a lot better, up to the point where I can safely admit that I enjoyed vaping it. 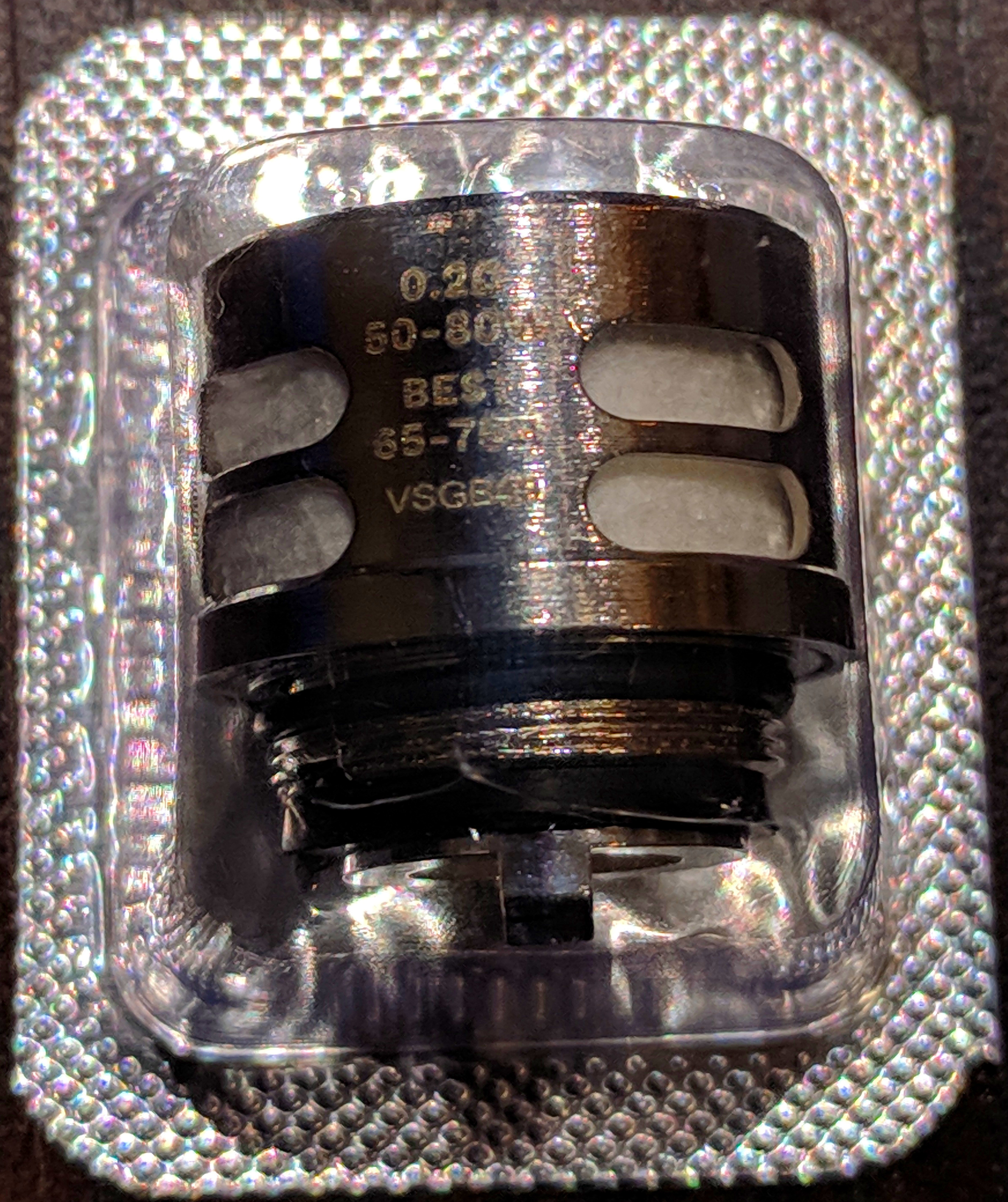 One remark I have to make is that even tho the coils have flax fiber mixed with cotton, the longevity is not what I would expect. Strip coil started giving burnt flavor after only 60 mils of juice (compared to a sub ohm coil from another company that passed 120ml of juice, and it’s still going strong). The Mesh coil had very similar performance, Sweet pot was at 60w, first tank gave lackluster flavor, which got better after the first filling, but this coil croaked after only 30mil of juice. I never know whether it’s my fault when it comes to burnt out sub-ohm coils, or it’s the coils fault, but they never last me as long as I would wish. 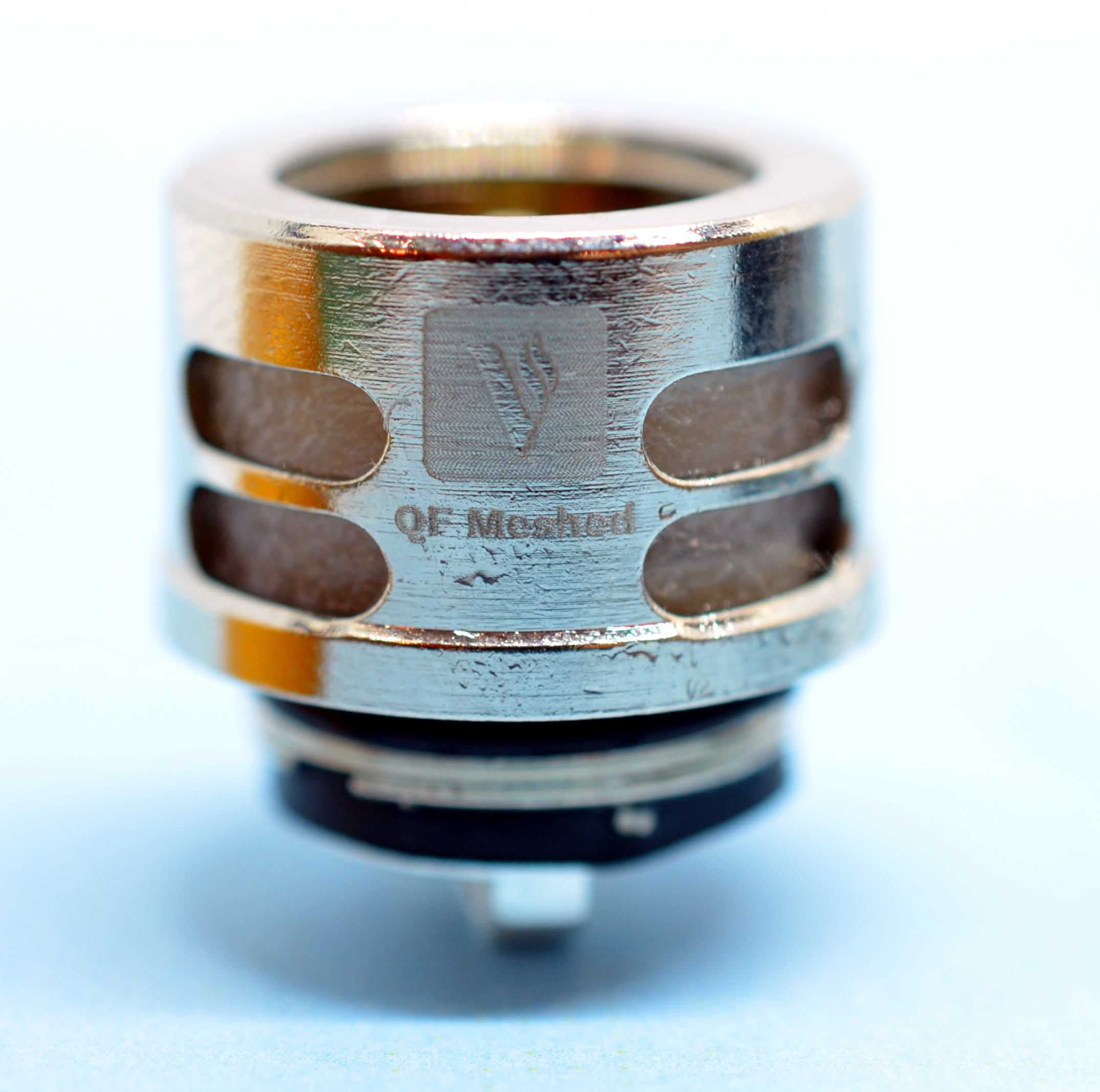 A few praises do have to be given to this tank: The coils are not juice guzzlers, the tank never leaked (as advertised), and the flavor was very good after that first filling.

Things I would change: Mostly the airflow. It’s a bit loud for my taste, and it’s not too airy. I found it very good for my taste when wide open, but I do like a slightly restricted pull on my tanks. Fans of tanks with huge airflow will find it lacking in this department

To sum it all up: Vaporesso Skrr-S is a nice sub-ohm tank. It’s easy to work with. It gives good flavor, it doesn’t leak, it doesn’t crackle or spit. I would recommend it to folks who are into sub-ohm tanks, but since I’m an RTA snob, I would’t replace it if lost or damaged.

For more info on Vaporesso products visit them on www.vaporesso.com

For the end, enjoy the obligatory shot of the tank base (curiously enough they call it Skrr-i there) 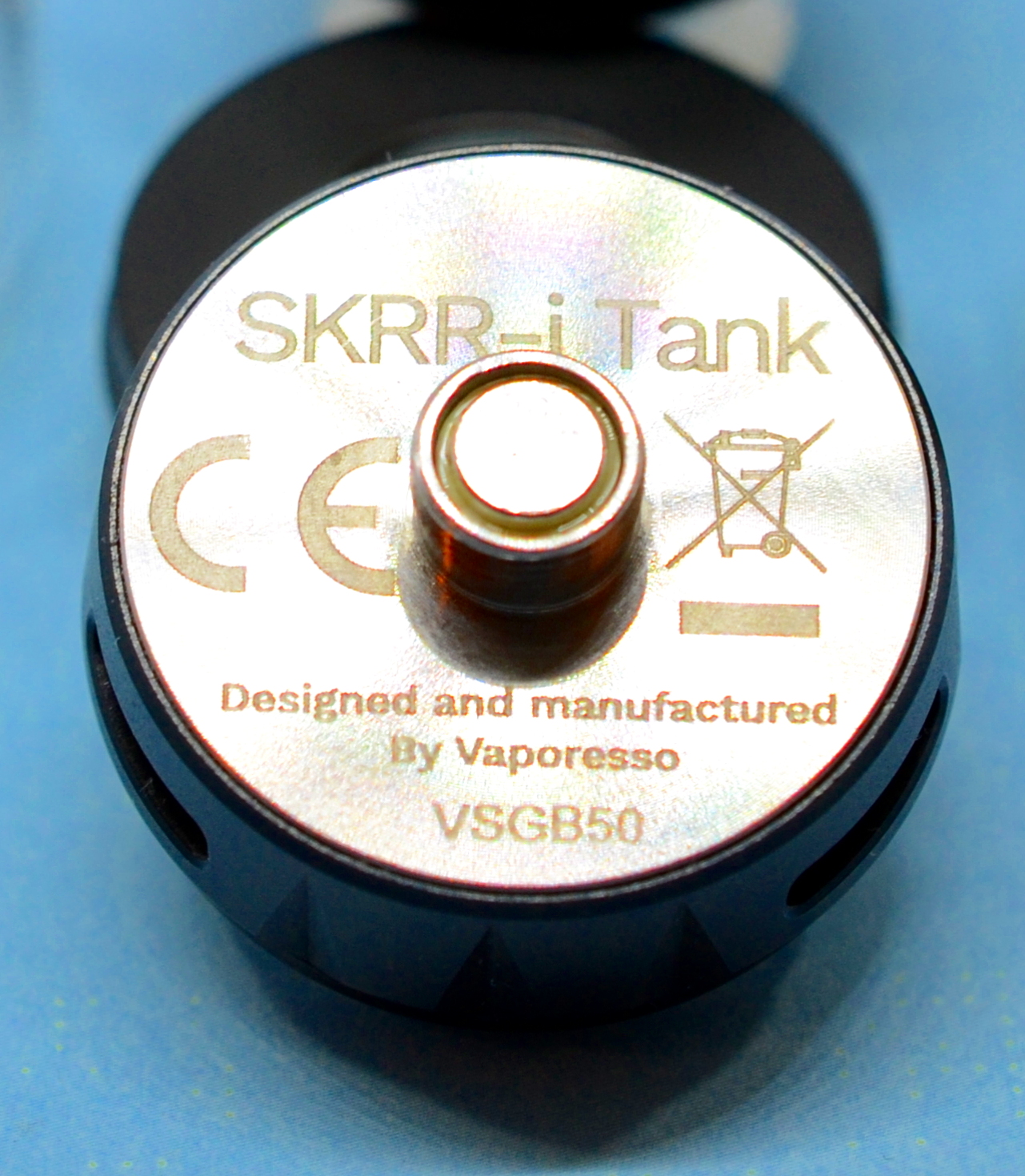 Appreciate the review. I’m a fan of Vaporesso as well. I’m also an RBA snob but get plenty of inquiries about sub-ohms. Will come in handy.

I like Vaporesso a lot. They have some good products (and some terrible ones tho)

Congrats over here too

I enjoyed your review @adary thank you.

Thanks. Glad you liked it

Hi,
I live in the UK, where can I buy this exact tank from? I have one already but the glass as well as the glass protector are probably not available here. I have the straight glass and no protector is available anywhere at all. Please let me know. Thank you…