Looking to extend my Vanilla Ice Cream concentrates and wanted to get peoples opinion.

LB’s would be me favorite, and TPA’s isn’t terrible. Just tested Sobucky’s and it was pretty good.

Ice Cream Vanilla (SSA) 1.5% (10-11-20) – Deciding on what strength to mix this at after testing SSA’s Ice Cream @ 2% proved difficult. It smelled stronger in the bottle, so decided to drop 0.5% from the original Ice Cream. Even mixed down from their Ice Cream, this one presented as much more forward, and fuller. A lot of similarities to SSA’s Ice Cream but with more presence, and some nice Vanilla notes thrown in. The vanilla seemed close to a vanilla bean that was high enough in the mix to make itself known but not overpower the profile. Clean, accurate, and I actually think better than their Ice Cream. I love the fresh approach to an Ice Cream SSA has taken, as none of the somewhat off-putting sour or typical cream notes found in many other IC’s. One of the best I have tried. Even presenting stronger/fuller/richer than the regular Ice Cream, it isn’t as heavy handed as say LB’s VIC. Sweetness was lower than mid level, and I could see numerous uses for this one, as was the case with the Ice Cream. Moving this up on the scale for a fuller, richer, more flavorful experience than the regular IC. 8.95/10 .

As far as buttery rich, or clean vanilla, it depends on what overall profile you need @PAPACHiGLY.

Might want to pick up some TPA Vanilla Swirl, and FA Vienna Cream for @SthrnMixer’s tried and true

I’ve got TPA Vanilla Swirl and FA Vienna Cream. In fact I’ve got over 500 concentrates. To some that doesn’t seem alot but you know as do many others, there never seems to be enough!.
I wasn’t really aiming for a particular profile, rather just improve my stash

and learn about what each one brings to the table. Thanks for your help and always appreciated 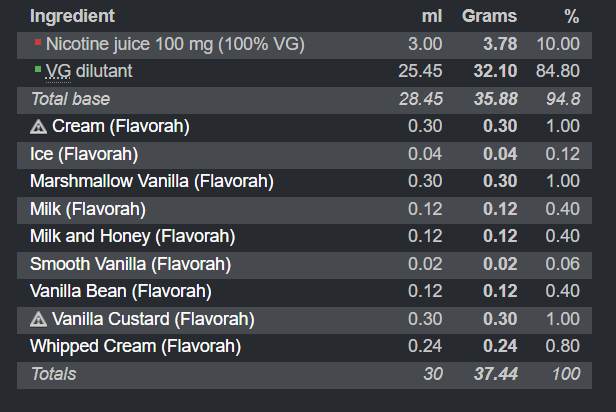 This is my vanilla bean ice cream… Excellent as a base, or even just as a recipe…

Try it out and see what you think

Missing a few FLV there @SmokyBlue but would totally mix if I could. Looks dam fine to me eye

@SessionDrummer Luke posted your soft serve pineapple and that’s busy steeping, I decided to mix a litre as it smelled great in the first 100ml bottle
Great I’m curious to see as it’s very similar to the ice cream trinity mix by eye make pizza if in that recipe and more boasting the lb vic to 5% from 2% has a if difference I. Terms of mouthfeel and flavour

Keen to develop this further and create different profiles with Blueberry, booysen berry, mango and coconut apple and dragon fruit as individual mixes

Also I recently tasted a commercial juice that had flv white chocolate in It, this may be a nice addition to the the base you created as the mouthfeel on white chocolate and coconut is out of this world

Hey @Busdriver, welcome to the VC !!!

I’ve seen the Trinity, but haven’t mixed it up yet. To me, LB’s VIC has a threshold, and it can vary depending on what it’s mixed with, but once it’s at it’s threshold, it almost starts to fold over on itself and get strange. Let me know once the Soft Servin’ Up Pineapple has finished steeping, and if you’ve tried the Trinity.

Glad you stopped in.

MMmmmm @SmokyBlue, now that I better know what the FLV Vanillas are, I can almost taste that already !!!

Thanks for the input everyone

I guess my question was aiming more for “what’s your favourite VBIC concentrate?”.
I know it depends on what recipe you’re aiming for so there may be say a top 3 or 5.

I guess my question was aiming more for “what’s your favourite VBIC concentrate?”.

I would have to say LB’s VIC @PAPACHiGLY. It may be buttery rich, but you can control that aspect by usage rates if needed. So you can unleash the Kraken if you need to.

LB VIC is my favorite as well, it just integrates so easily in many recipes. I had thought that FA Vanilla Ice Cream (Gelato Vaniglia) might be a worthy successor based on a good mix but turns out it isn’t as versatile or forgiving as LB.

I just got VTA Vanilla Ice Cream which so far seems promising. It is like a brighter TFA Vanilla Swirl. Still working on percentages on this one but it sometimes leans towards a Vanilla Pudding.

WF VIC is almost a French vanilla as it has an egginess to it. Sort of reminds me of SSA VIC, that one leans more buttery but can be confused for eggy as well.

I have been on the hunt for a new VIC as I get bored using the same flavors over and over. That said the LB VIC is still by far the best I have tried so far.

Gonna give that a shot Smoky minus the Milk, don’t have it, or the Ice, don’t want it lol

I have an aversion to LB and TFA as I get pepper from both unfortunately as a curse. I am forever looking for equitable subs which can be tricky to judge, E.g if a recipe has 2% LB or 4%LB which icecream what do I use and at what%. As for HS French Vanilla my threshold for that is about 0.2%. VT Vanilla cream is like melted soft serve to me. I usually use that with some other icecream like FW. Also VT buttercream frosting at 0.4% can give it an extra firmness and sweeter top edge.

Hey @SmokyBlue your VBIC recipe is pretty damn good as a shake n vape. How many days steep you figure?

Surprised no one has mentioned FW VBIC. To me that is my go too. Nothing better.

LB is my fave but it can be a bit too buttery for certsin profiles . If i dont want the buttery VIC ill either go with FW or Cap . I do have the nrw SSA but havent played with them enough. I get pepper from TPA so that not so great for me . I aleays have to add a Vanilla or Cream to complement any VIC SF and usually go with MF Vanilla and FLV Cream to help the VIC concentrates …To this day there still isnt a VIC that doesnt need help other good Ice Cream type to help VIC is Hangsen FV

@lukeloop Interestingly, I also get a slight peppery note from LB VBIC but luckily it does steep out after a week as I think it’s a banging flavour.
@Mjag some really great notes!
FW VIC is on my list, especially after reading the comments