Thanks to Lilia at Sourcemore for providing this for review. I have no affiliation to Sourcemore or Vandy Vape and the item was supplied free of charge.

Vandy Vape have produced mods, RDA’s & RTA’s since 2016 and have built up a reputation for producing quality and innovative vape gear. The Requiem RDA is the latest addition to the stable so please read on to get my thoughts.

head4500×1000 1.37 MB
Created in collaboration with El Mondo Vapeador, a Spanish YT reviewer who also worked with VV on the Widowmaker, this is a 22mm RDA offering DL, RDL & MTL set ups in one box. Packaging gives the impression of quality. The clear lid shows off the RDA deck, airflow and beauty ring and the three optional top caps. Usual branding around the box & contents listed on the rear. Lifting the clear lid and the RDA is laid out in it’s component parts set into a dense foam tray. Under the tray is a bag of spare O rings, screws, Allen key, blue screwdriver, 2.5mm dia fused Clapton @ 0.26ohm and 2.5mm coiling rod. Also included is a squonk 510 pin and spare deck screws. There’s also a multilingual manual and QC card.

cap3000×1000 602 KB
Standing just 15mm high without a drip tip, and 22mm diameter, this is a small single coil RDA. It’s size belies its ability to pack a punch flavour wise. The deck comes with a solid 510 pin fitted but a squonk pin is included so this is the first thing I did. Word of warning though, the blue screwdriver supplied is way too small to be useable so find a flat blade to fit, as you will need it for the post screws as well. The deck itself is a postless design with the coil being held by two large head screws. Airflow is directed to the bottom of the coil by the downward angle of the twin airflow slots. The juice well is shallow, capacity 1ml, and prone to over squonking/dripping if you’re a little heavy handed. The supplied 2.5mm dia, 0.26ohm Ni80 fused Clapton is a good match. Pop the coil on the coiling rod and pop the legs under the loosened screw heads & drop the rod onto the two cut outs for perfect height placement. Once tightened down a couple of pulses to get rid of any hotspots and wick with cotton of choice. I used Vapefly Firebolt 2.5mm shoelace cotton. Trim to just outside the deck, quick fluff and tidy up and tuck into the juice well. When refitting the top cap I found it easier to fit the top cap to the AFC and then, lining up he air holes push and twist until it engages with the two lugs on the deck, To adjust airflow rotate the metal body. This took a couple of goes to get right as the O rings are tight and need a couple of drops of juice to lubricate.

build3000×1000 767 KB
Using this on a mech squonker with a fresh battery and the flavour was spot on and plenty of cloud with the DTL cap. Despite the shallow juice well I still got a good 5-7 pulls before resquonking and any excess juice was drawn back into the bottle with the raised pin allowing some juice to remain. With a wide bore drip tip this was my preferred cap. Swapping to the restricted DL cap with a smaller bore I found the flavour a little more intense and a warmer vape. The MTL cap restricted airflow nicely wide open & can be further tightened closing down the airflow to satisfy those who like a tight draw, and this complemented the narrow bore tip. The MTL cap will undoubtedly benefit from a higher ohm coil to reduce the heat but I had no wire/coils to try.

The Requiem is small in statue but big on flavour. Plus points are the simple to build deck, three cap options to suit all styles and can be dripped or squonked. On a regulated mod 40-45w on the DL cap was the sweetspot for me. 25-30w was again spot on with the RDL cap and would suggest a simple 0.8ohm around 15w would satisfy the users of the MTL cap. Only niggles but the airflow can be hard to adjust and the airflow hole is hard to see on the version I got that has the amber coloured caps. Over squonking or dripping can result in a mouthful of hot juice and the juice exiting the airflow when tipping to vape.

All in all the VV Requiem is one RDA I can recommend regardless of vaping style.

Thanks again to Sourcemore) for providing this for review and it is available here for $18.25 (£13.72) plus p&p, an absolute bargain. 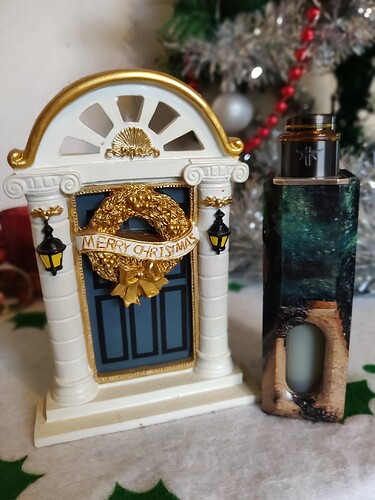 Nice. I have been eyeballin that for a while now. The single coil is what keeps me from getting it but I think I finally will.

Thanks for taking the time to write it up.

Maybe I am doing it wrong but I get Absolutely NO flavor,

OK I am a month down the road, maybe 2 maybe 3, I have used it off and on and my general take is …no flavor. I will admit I get SOME flavor… or SOMETHING but absolutely limited to those thin top notes of various profiles. Maybe its me , … I like the look of it and the whole kit thing is attractive… like a swiss army knife, …but using the direct lung cap I am disappointed. Hey I paid like 24 dollars… Ill keep trying…