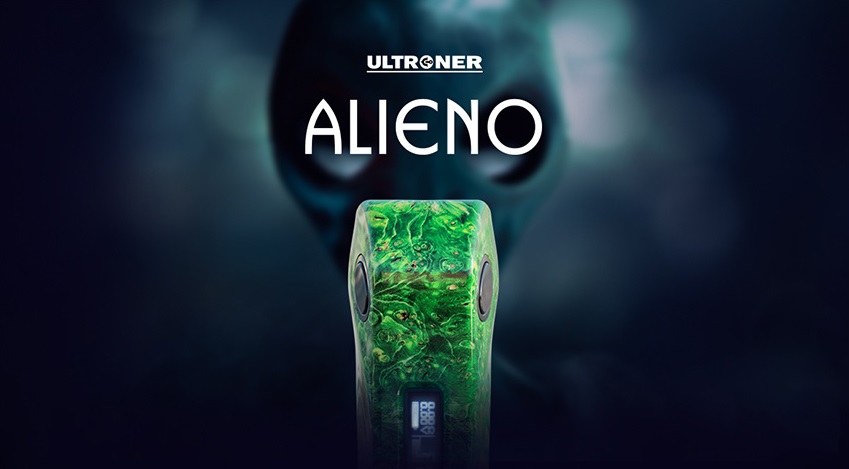 Ultroner are best known for their long term contract doing stabwood finishes for Asmosdus and since that contract ended have gone from strength to strength as part of the Sacowin Stable manufacturing affordable stabwood devices utilising either DNA or the in-house Sevo chipsets!

The Alieno is a single 18650 device which is powered by either the DNA60 or Sevo-70 chipsets. I received the Sevo-70 version which is the cheaper option although all things considered neither for the materials used for it’s construction and standard of finish is expensive and the Sevo chipset is one i am very familiar with and have found it to perform excellently every time.

The Sevo-70 version of the Alieno brings us Wattage, Mech (Bypass) and full TC Suit as well as a separate menu system which includes the curves feature. This beautiful looking device also comes with dual fire buttons allowing the device to be held and fired in the same position using either hand and has a replaceable battery tube for customisation, let’s give it a look! 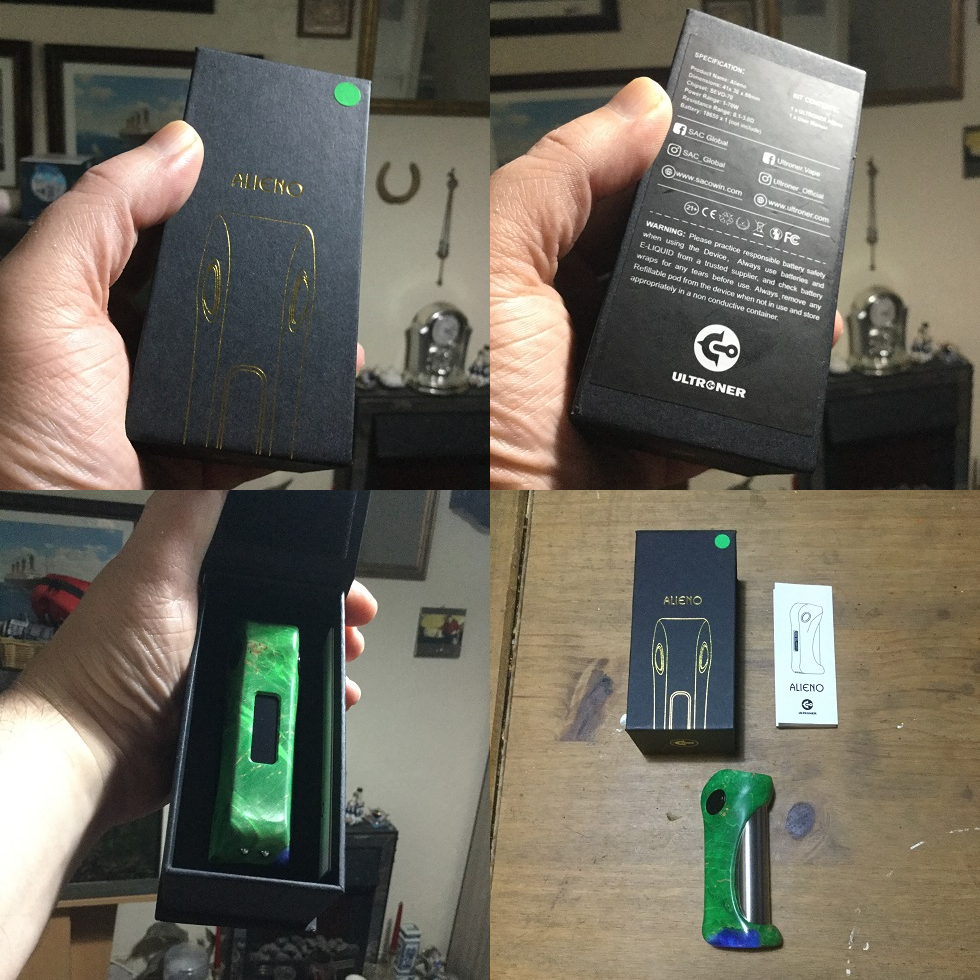 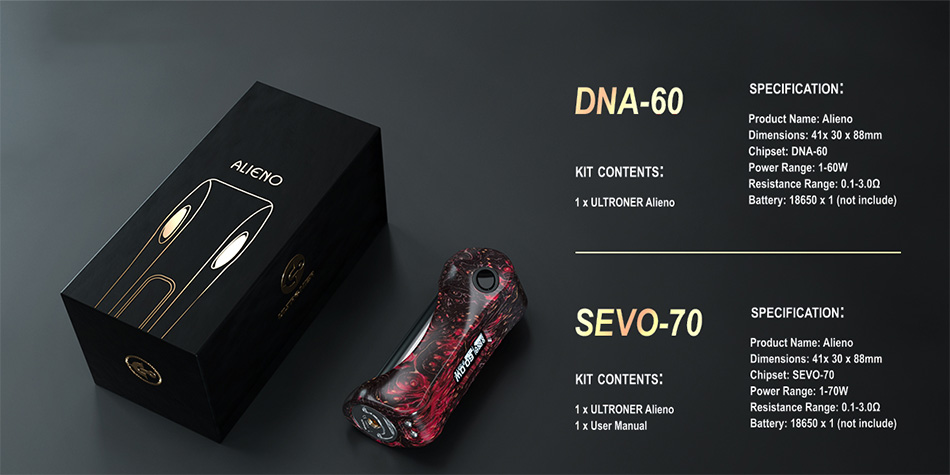 The Alieno came in cardboard flip open box packaging with the gorgeous stabwood device proudly on show with the lid lifted. I received the Green version but of course as is the nature of the material and stabilising process every device is unique, the options are Purple, Blue, Green, Red or Wood Colour (Natural Grain), it’s great that a Natural Wood option is available.

The device has a slender form factor with the top bulging slightly to mimic an Aliens head and an oversized Black fire button either side which are Alien eyes! The device has a gorgeous stabwood main body then Stainless Steel battery tube, battery plate and 510 plate. We also have two Stainless Steel, ball bearing shaped navigational buttons on the tapered front of the base and those already mentioned large fire buttons are plastic.

On the face central we have an elongated screen then moving to the base in an indented section at the front the already mentioned navigational buttons then on the main base area a battery plate with fold out lever. Moving to the top we have an indented 24mm Stainless Steel 510 plate with Gold plated, spring loaded 510.

The device is both small and light and once i got use to the fire buttons positions i found it very comfortable to both hold and fire in either hand! 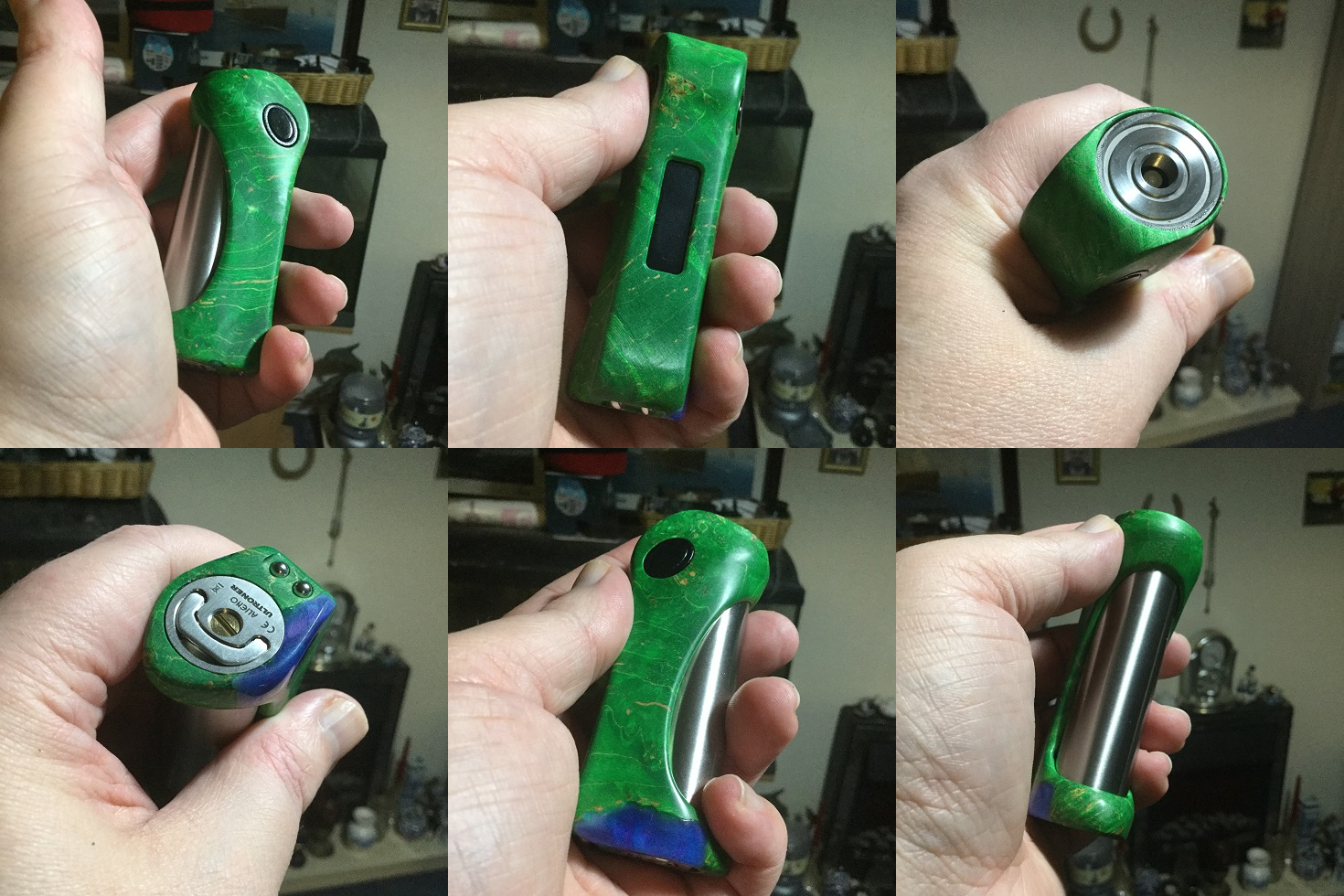 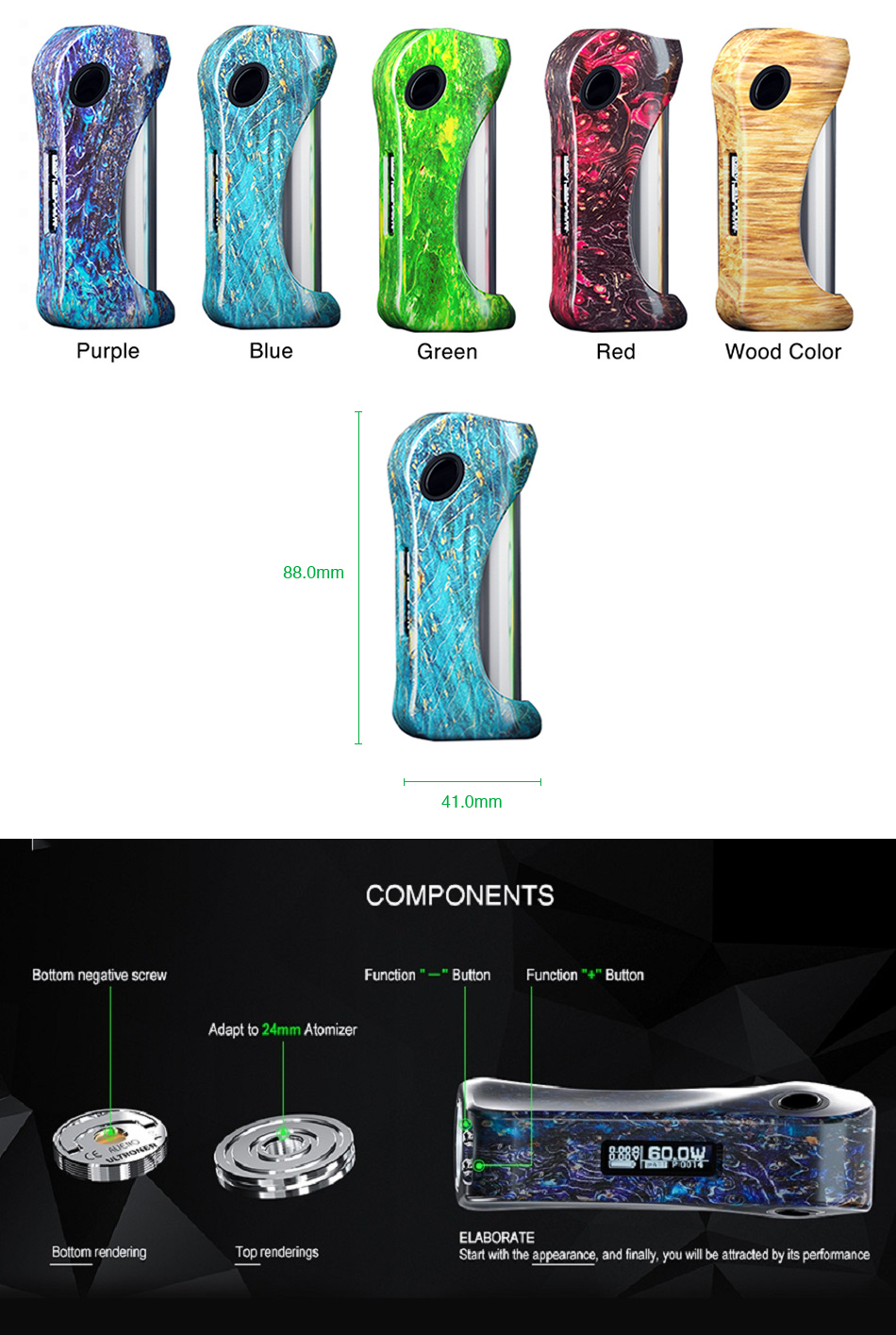 The Alieno Sevo-70 device is a 70W device and the DNA60 version a 60W device both of which accommodates a single 18650 battery. On the bottom of the device we have an old school style battery plate which has a central lever that folds out which can then be used for unscrewing the plate. The threading is very smooth and i still prefer this type of design for fitting single batteries as it’s very secure and you can’t damage your wraps.

Some may not like the fact the threading on these caps take quite a few turns to undo or tighten up although the threading isn’t as long as usual on the Alieno. On the underside of the plate we have negative clearly labelled and we have no rattle whatsoever with the battery installed! 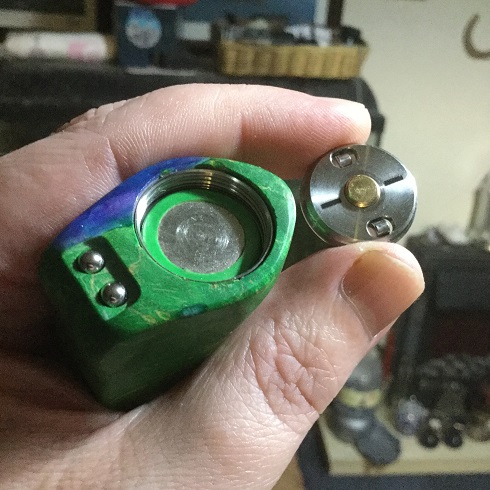 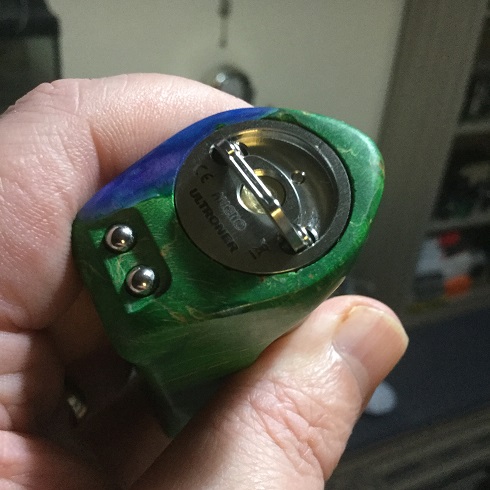 As an added bonus if you get a grip of the battery tube at the spine it unscrews and alternative ones with a different design can be fitted for a bit of customisation! 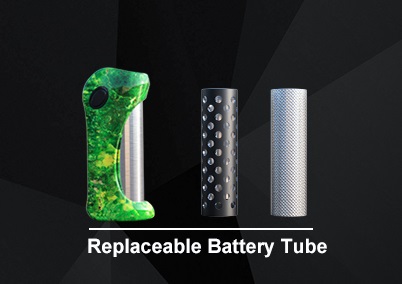 The big talking point is having a fire button both sides but it actually with the design makes sense and works. The buttons are suppose to resemble the eyes of an Alien and if one was a dummy then people would find themselves on occasions pressing the wrong one, having both able to fire the device not only resolves this issue but also means the device can be held and fired identically in either hand.
The only issue i do have with the fire buttons are the fact they are plastic, i get it using Black plastic buttons is the easiest way of getting the Black glossy look of the Alien eyes and actually on my device aesthetically they look really good but having plastic fire buttons on a device made of such high quality materials seems a bit of a mis-match 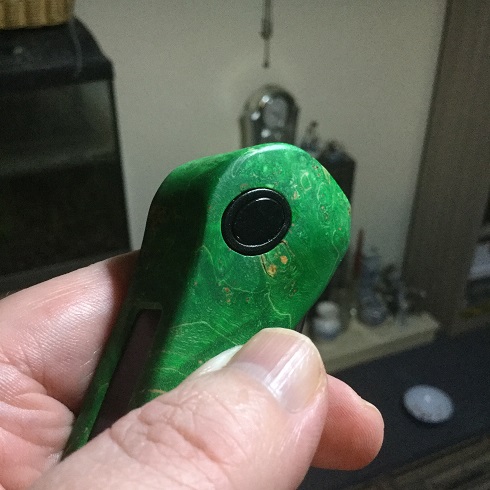 The navigational buttons are Stainless Steel and shaped like ball bearings, they are quite small but nicely spaced and are positioned in an indented area at the front of the base where it tapers upwards. I absolutely love the position of these buttons as with most devices with a small elongated screen where you need the device on it’s side to read the screen you press the buttons with your finger pointed out straight in front of you which unless you have the device a distance away from your body is quite a cramped unnatural position. When adjusting with these buttons it feels much more comfortable and natural and hope to see the buttons placed in this position on more devices of this type. 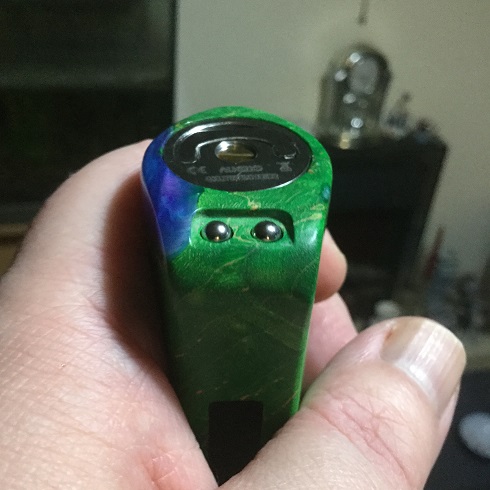 The Display is bright and very much Old School just giving the most important information. Top left we have the resistance then underneath the voltage (this is wattage when using TC), finally bottom left we have a battery status bar.

The top right area of the screen is where you will find the wattage or temperature depending which mode you are in and underneath to the left is the mode and bottom right your puffs. 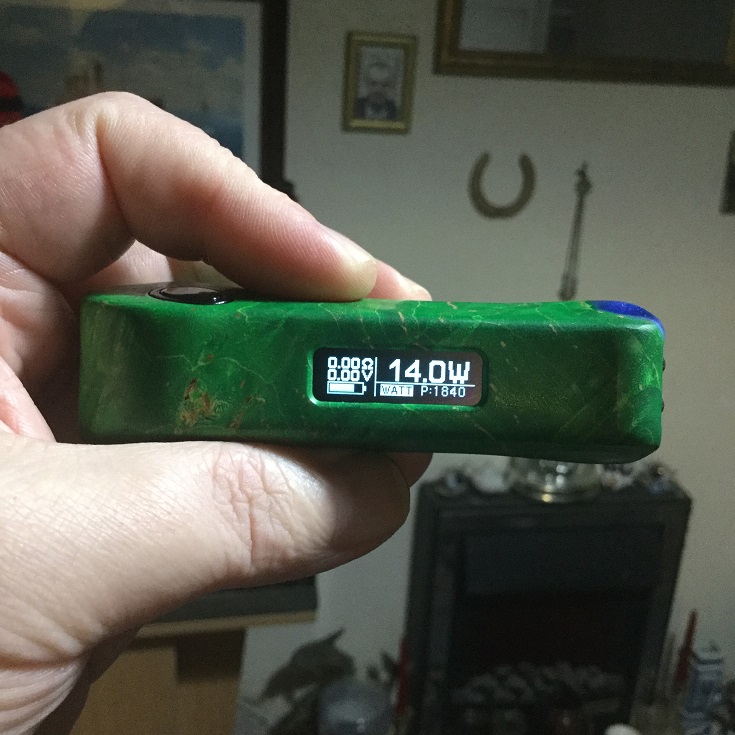 Navigating The Sevo-70 Chipset In The Alieno

The device is the usual 5 clicks of the fire button to turn on and 5 clicks to turn off and once on up and down together locks and unlocks the navigational buttons but the device will still fire.

To choose the mode is 3 quick clicks of the fire button which allows you to scroll through Mech (Bypass), Watts, Ni, Ti and SS, fire selects. There is also a little menu which is down and fire to enter, this gives the options to reset puffs or set a puff limit, flip the screen, enter the curves feature or turn the screen off, to turn the screen back on you need to press down and fire again to re-enter the menu. 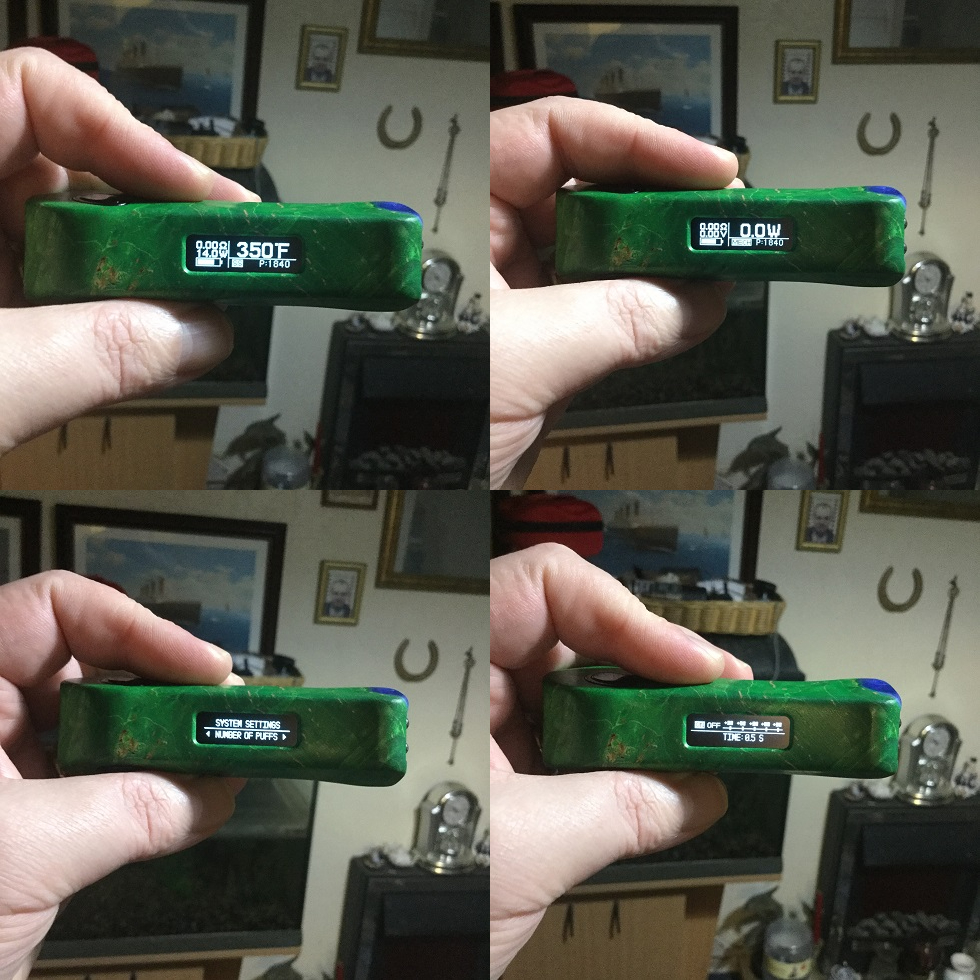 The Alieno has no USB port so can not be updated and any charging of your battery needs to be done externally. Although there will always be exceptions my way of thinking is most who would be interested in a stabwood device would tend to charge externally and like me will possibly be quite grateful they don’t receive yet another USB cable to clutter up the place.

Both the Sevo and DNA60 are tried and tested chipset so i really don’t see any issue with not having a USB port as far as the Sevo-70 version is concerned but it means those getting the DNA60 version will not be able to use it with Escribe!

My Experience Using The Alieno And Thoughts!

I have many stabwood devices but i am having a love affair with the Alieno, just don’t tell the wife. At first it was pure lust until getting use to the positioning of the fire buttons and then it became true love. The only real con for me is the fire buttons being plastic although they look fine but just think with the device having such a high build quality Ultroner should of kept to high quality materials throughout.

I really like the dual fire buttons and once use to their positions the device can be used identically in either hand and it’s so comfortable to both hold and fire. The position of the navigational buttons is a big pro and i also like the ball bearing shape of them. I also like the way the battery gets fitted and quality of the threading, being able to use different battery tubes also adds a bit of customisation which is another pro!

The Sevo chipset i have used in many other Ultroner devices and the SXK Supbox and it gives both high performance and efficiency. It fires without any delay hitting set wattage instantly and never misses a beat and those that prefer the DNA60 chipset version will know they are getting a tried and tested chipset of the highest quality . The user interface on the Sevo-70 version which i received is very easy to navigate but is feature rich including Bypass, TC and curves.

It does need mentioning that the 510 plate is indented so any tanks over 24mm will not fit but then this is a low powered device so suited much more to MTL or single coil tanks of which most will be 24mm or smaller. Also we have no USB port for charging or updates but as mentioned most people interested in this device would charge externally anyway but it does mean those getting the DNA60 version can’t use it with Escribe! I normally don’t mention price in reviews but one big pro is just how reasonably priced the Alieno is, the DNA60 version is comfortably less than £200 while the Sevo-70 version is less than £150 which for a Stabwood device of this quality is a steal!!! 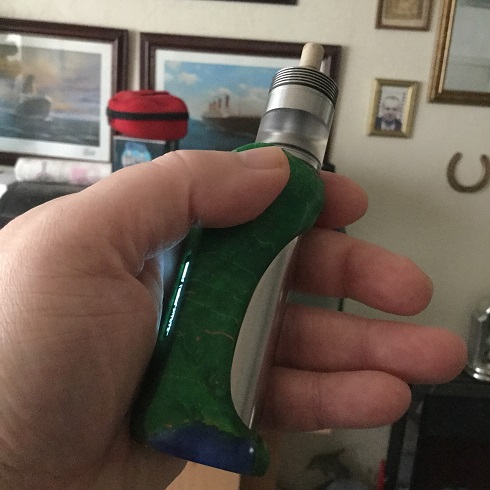 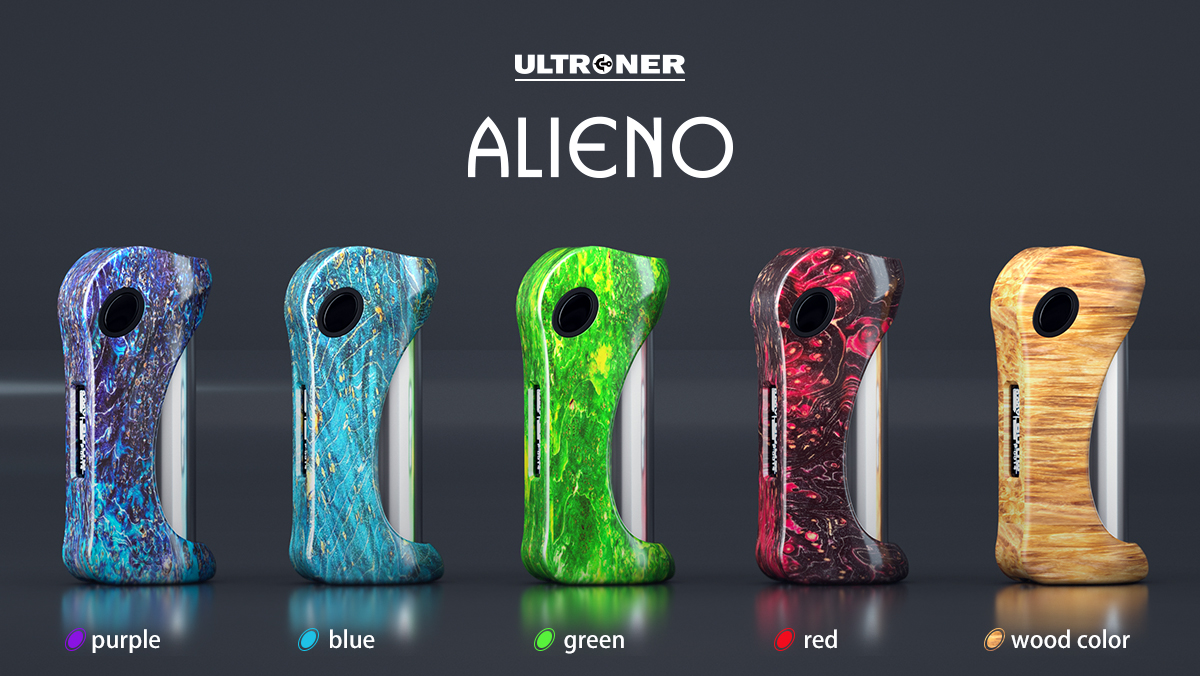 I would once again like to thank Sacowin for supplying the Ultroner Alieno 70W TC Box Mod for the purpose of this review, thanks for reading and stay safe!

Great review @Timwis, who’s not a fan of stabwood mods, right !
Personally not big on single 18650’s anymore myself, but the old school display is a plus in my book,
Well done

Yeah its a 70 or 60w device depending on version so an 18650 is perfectly good enough which also keeps it a nice small size. This is ideal for MTL or single coil low wattage RDL set-ups so isn’t going to suit everyone!

Very well thought out and presented review @Timwis. I love the form factor of single battery mods, even with the limitations that entails, and these are sexy as hell, esp the red one. I just snagged an Aspire Feedlink revvo for next to nothing, with an almost identical form factor and I love it…even though I chucked the Revvo tank it came with away, and replaced it with the Vapefly Pixie, the change in the setup gave 3x the battery life with a far more flavoursome dripper. On the down side though, this Alieno is a bit pricey … I picked up the Feedlink for about $17.00!!

Pricey compared to devices made from other materials but stabwood devices of this quality are usually £300 minimum and quite often up at the £500 price mark!

I also have the Feedlink and paid a similar price to you, it’s a very decent BF device and for a budget option is very nicely made!