I would shit a brick having to deal with that extreme weather, my heart goes out to those who lose their livelihoods / lives to the devastation

Dayum, that looks bad. I’m not familiar with that kind of weather, we don’t get tornado’s here and looking at your pics I can’t say that I mind

I was put on the wrong foot by the title of your topic, trains and other public transport are on strike today in the entire country so not keeps a rollin at all.

Yesterday Tornado’s (still counting) ripped through Indiana and Ohio and thankfully no lives were lost.

Not much hill to speak of here mind.
I remember cycling through Amsterdam forest once and there was a sign saying, hill

so I cycled that way looking for the hill and got to a sign saying, hill

Sorry to hear you’ve had to correct your post. I hope things clear up over there pretty soon.

Stay safe my friend, that is some scary stuff.

Well… Round 3 last night was another barrel of fun (not!). Pea sized hail and an hour or two later massive torrential downpours.

Mother Nature can be ruthless! Sorry you guys are getting hammered down there, I can’t believe the tornadoes! We’ve had two or three ( that I know of ) touch down so far locally, which might not sound that bad to you guys but it’s rare here. One about 7 miles from me. We just installed a safe room in the house recently so the closet isn’t finished.

It’s bolted down to a 7×7×4 ft concrete stab so it’s not going anywhere! Feel a whole lot safer in the house. Would definitely recommend one if you don’t have one already. We used it Saturday when we had a storm blow in and I would suggest plenty of light and a couple battery operated fans. All we had was a flashlight and cell phones for light and it got claustrophobic and stuffy so a fan would of been nice!

I remember when I was a kid I was very jealous of people who lived in regions where they had tornadoes, they looked so pretty.
We just had some boring wind.
Nice being a kid eh, not being hampered by any knowledge

Damn, I am glad we don’t live anywhere where the wind is that bad - I have thought about a bush fire bunker they are a little more expensive than hopping in the car and pissing off to the lake 500metres away so I haven’t bought one.

You should have one for those gigantic spiders you have running around. Fuck those things! I’ll deal with the wind lol

Man, what a mess! I wasn’t going to do a garden this year but I may change my mind.

are you guys drying up yet?

Like @anon96069639 mentioned, in our area, the biggest problem is the flooding.

It’s reached further inland than I’ve seen it in a long long time.

Damn, hang in there fellas!! Hopefully your not getting any water damage!

But some of the outlying areas have been especially hard hit this year.

For those abroad, the Mississippi River divides many states from one another. (In the pic below, Missouri is on the left, Illinois on the right of the river): 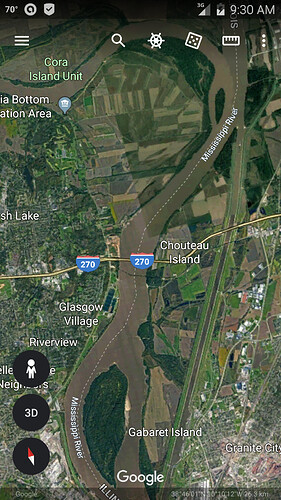 Below (closer view) highlights “Chouteau Island” (which wasn’t an island at all, until they added the causeway [the long straight area] on the right of the pic for barge traffic to be able to bypass the area that constantly had to be dredged of silt deposits). 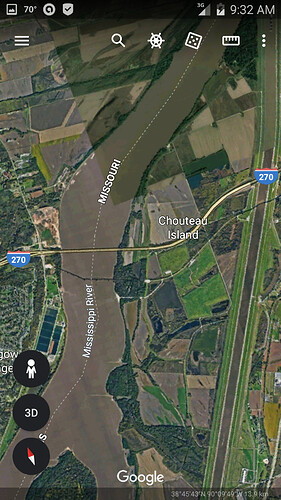 Chouteau Island (Illinois) was completely flooded from the Mississippi all the way across to the causeway just a couple months ago (if that).

Now, that island usually floods maybe an eighth to a quarter mile inland (on the Illinois side). But I can’t remember the last time I saw it flooded completely across. (I haven’t tracked it, but I’d guesstimate that it’s a good mile and a half, to two miles between the time you are no longer over the river on 270, and crossing the canal/causeway).

Note: I should clarify that by “completely across”, I mean that there was a foot or more of standing water in every field. NOT that you couldn’t see the island.

That’s crazy!! Good to hear your all well. I’d own a double wide on pontoons around that area! Like I stated before " what a mess!"

Heads up!! (if you don’t already know)