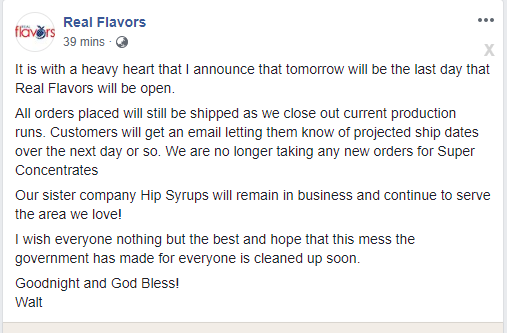 Do I know how to fix it?

I do!
BAN POLITICIANS!

I have not been a big fan either. But I don’t wish ill will or failure to anyone. I am a fan of anyone that has the courage to start their own business and I am happy for their successes. I am not a fan of stupid idiotic politicians that think they are smarter than you and know better how to run your life than you do. I am not a fan of politicians that have no problem unjustly and with sheer ignorance and contempt to destroy businesses, and put people out of work.

RF didn’t have a lot of good flavors but they did have a few great flavors for me. I actually got in a 500ml bottle of RFSC Strawberry yesterday and have a big bottle of there Coconut. Must have gone through at least 1,000 ml of Strawberry Milkshake as my friends were ordering it up like crazy. There Pineapple, Strawberry and Coconut go into my Lava Flow clone which still is pretty popular…yeah, I need to stock up.

This news really sucks, I have a hard time checking into the forums lately.

I have a hard time checking into the forums lately.

Seriously.
It’s just been one shit show after another (news-wise).

That’s really bad, I’m really sorry for everyone affected by this.

These are flavours!! Flavours god damn it!! What in the world is going on…

It’s Orwell’s 1984 just a few decades late. Up is down. Right is wrong. Attack your opponent with smears and lies and abandon common sense even if you hurt people. If you read Lenin, Marx, Alinsky etc… you know exactly what is happening.

What in the world is going on…

In fairness though, it may have absolutely nothing to do with the other bans etc going on right now.

Walt has been known to/has a long history of changing shit (including companies and branding) for years now. And he’s only been around for less than a decade (in our industry). Actually, less than half that. He came on the scene in 2016.

He’s gone through countless offerings of ‘lines’ (extracts, VG, PG, PDO, SC’s, Pro-SC’s…), companies (RF, One Drop Flavors, and another I can’t recall), to we’re selling via Walmart online, to no we’re selling direct only, to no, we’re distributors only, to here’s our sister site… and there’s a number of things I’m sure we’re not even aware of…

In any case, I wouldn’t necessarily tie this in to all of the “current drama”. If there’s one thing we all should have learned by now about Walt, it’s that he’s CONSTANTLY changing directions. No rhyme, nor reason (stated at least).

I do think Walt had a lack of focus as you say. They also didn’t have a HIC or maybe Smoky for FLV side who championed the brand. FLV for there credit put there flavors in the hands of credible people for free to get buzz going.

The lack of focus was RF downfall, they should have followed what others had done to be successful.

I actually only have one die hard ADV that uses 1 RFSC flavor. My friends have a few that use RFSC and they have no idea what the ingredients are. It is definitely not a branding thing for them, they just like what they like and RFSC Strawberry, Strawberry Milkshake and Pineapple are winners for them. I have versions of those same recipes using other flavor makers that I prefer more but they continue to ask for the RFSC versions.

In some ways I think it would have been best if Walt didn’t participate in the forums. I know that sounds weird but it made him an easy target.

I really hate disagreeing with you (even though it’s ultra rare). But…

They also didn’t have a HIC or maybe Smoky for FLV side who championed the brand.

Personally I think that shills are the WORST thing for this (or any other) industry.

I lasso think there’s a distinct difference between HiC and SB.
What made me appreciate HiC is the detailed flavor notes. Smokey doesn’t have that. She is very familiar with the flavors, but is so closed minded (her percentage is the only percentage, or you’re wasting money…

bullshit!), and worse she beats the shit into the ground on posts/threads that have absolutely ZERO prior mention of FLV. Worse still, most of the newbies don’t even have a clue that’s she’s under fucking contract with Flavorah.

I respect company reps. But she’s in a whole other “category”.

I do respect several aspects of what she brings, but others leave a seriously bad taste in my mouth.

The lack of focus was RF downfall

In my opinion, the lack of consistency was.

newbies don’t even have a clue that’s she’s under fucking contract with Flavorah.

While I agree that it gets a bit repetitive smoky popping up suggesting flv on unrelated threads. She is not under a $ contract as I understand it. It may be that she gets flv at a cut rate or even comped but I am sure she doesnt get actual folding out of what ever deal she has.

I know she is working on her notes and will be making all of them public (most likely on her site but none the less they will be available).

I think one of the major downfalls of RF was that Walt was impulsive and made split second decisions that sometimes didn’t sit well.

I also think there’s a distinct difference between HiC and SB.

I agree with that, that is why I said “maybe Smoky” shouldn’t have lumped those 2 together, I was just typing away.

HIC was receiving pre-release flavors and probably comped as well. I respect HIC but she was clearly on the side of FA and was compensated with free flavorings.

Smoky is on another level entirely, I think she does more harm than good for FLV as you can see people are getting fed up.

Edit: When I read HIC used a Protank to test her recipes that is when I realized why they didn’t work for me. I was on to subohm tanks by then and the flavor just wasn’t doing it for me. Not a knock on HIC, they were great for that kind of equipment but don’t hold up today. Can anyone tell me a HIC recipe they still vape today that wouldn’t be better with other flavors?

I really hate disagreeing with you

Hey, I expect you to keep me in check fucker

Just ask my family, I am hardly ever right. I have always thought you learn more from failure than success, if that’s the case I have learned a lot

I am hardly ever right.

Well there is one instance of you being right

I have always thought you learn more from failure than success

Bastards, every one of you

Yes, and your point?