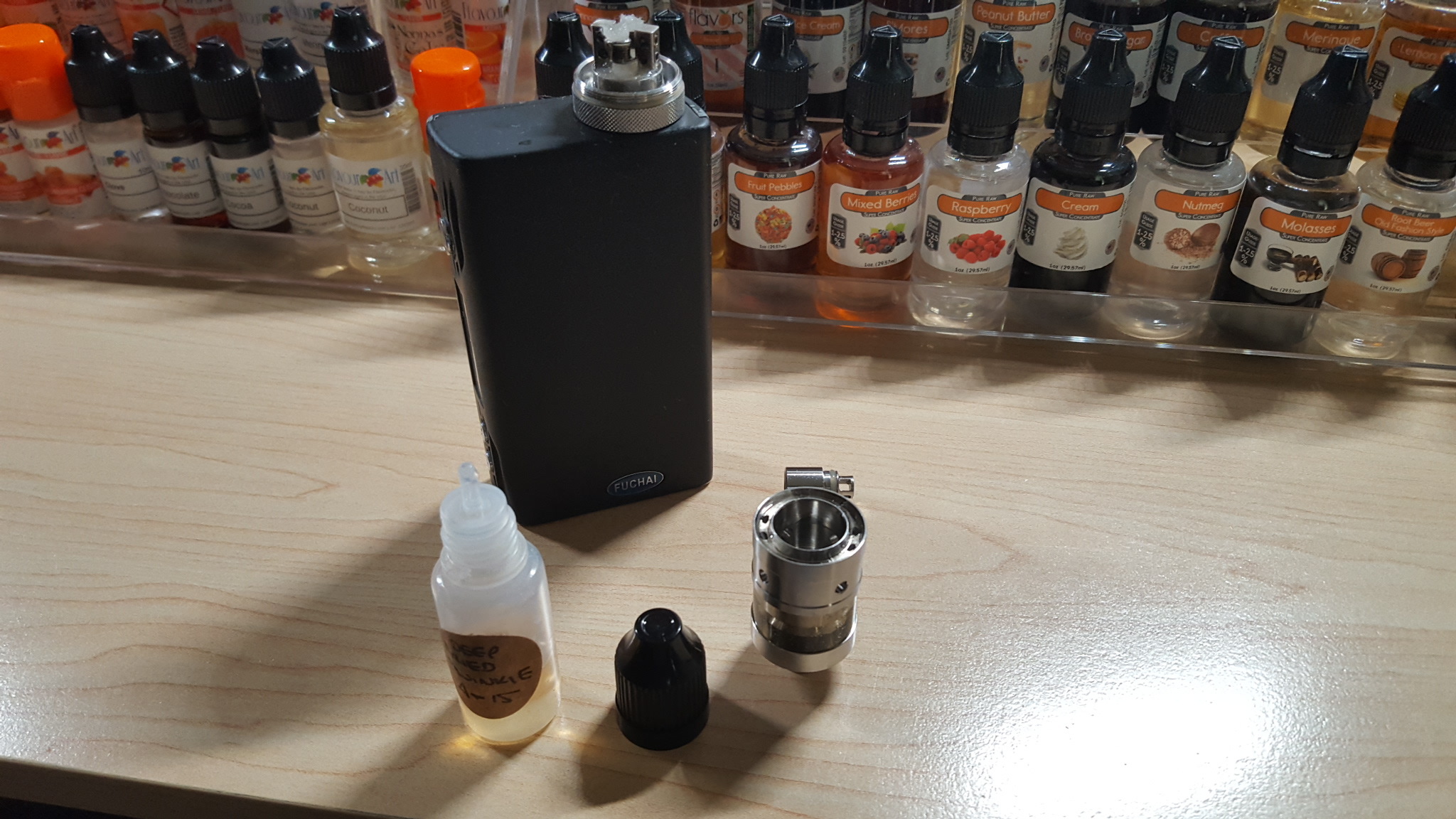 All testing will be done on Steam Crave RDTA v1. using dual kanthal coils, cotton, @ 35-40w. All flavors (unless noted) tested @ 6%, steeped minimum of 1 week (subject to change). Mixed @ 70v/30p, and evaluated for single flavor only. Fresh cotton and dry burned coils before all tests.

N.Y. Cheesecake (PUR) 6% (7-22-17) – Over a weeks steep to see if this would be a cheesecake I could actually vape. In a word, YES !!! Mirroring what @Mystic_Rose said this one IS a very unique cheesecake, and not really like any other manufacturer. Very nice and creamy, and great crust with cheesecake without any of the footy-ness our sourness found in most others. After 1 week 3 days, seemed like an even mix of crust and cheesecake, may try later and test past 2 weeks to see if it changes. Not bad at all throughout my testing. Very recommended @ 10/10.

Cheesecake Graham Crust (PUR) 6% (7-23-17) – This one clearly is a close cousin of PUR N.Y. Cheesecake. It is a very good, full, sweet graham cracker crust, but with a hint of PUR Cheesecake. The two are almost identical to one another with exception of the percentages, i.e. N.Y. Cheesecake is 75% cheesecake, and 25% graham crust, and this one is 75% graham crust, and 25% cheesecake. Missing a smidge of body from my fav. TPA, but good none the less, and it’s dik. free. Don’t get any cinnamon notes, or off putting flavors and it’s very satisfying. Don’t think it will kick my TPA graham crust off it’s perch, but still very tasty. Because TPA holds the high spot for me, I feel comfortable tagging this with 8.5/10.

Watermelon (PUR) 6% (7-21-17) – After a week+ steep on this one was a very good watermelon. Nothing artificial or fake tasting. I do think it leans towards the candy side, but not in a bad way, and it might even elevate it some. Probably one of the better watermelons I’ve tried. Not sure if going past 6% would increase it or not. @ 6% pretty damned good. 9.5/10 on this one for me.

Cream Dream (NR) 6% (7-29-17) – This one went through some changes during it’s 1 week + steep. Every once in awhile there was a strange off note, perhaps part of the creamy element, other times it would fade. Vaping it revealed a creamy/berry mix. Overall mix was quite good, nice mouthfeel, but the unknown element showed back up. Perhaps some will NOT find it off putting. Although I finished the tester that “note” didn’t enhance the flavor for me, which leaves me sticking this one at 3/10.

Strawberry Biscuit (NR) 6% (7-16-17) – Very first Purilum flavor tested. This one caught me off guard on the first vape with it’s very good strawberry and some biscuit and maybe a little butter thrown in. Didn’t get any artificial notes from it, and nothing off putting could be found. Strawberry is sweet, assuming a jam, it works pretty good here. Biscuit/butter is also very on point, weaker than the strawberry, but still there enough to be known. Overall for the name, it’s about 9.5/10 for a spot on SB.

Cookie (PUR) 6% (8-6-17) – 2 weeks of steeping revealed this one to be an interesting flavor. Wasn’t what I was expecting. Not like CAP Sugar Cookie, or FA Cookie, but biscotti like ? Not sure. Leaned more towards the FA Cookie while being somewhat drier but sweet. On the exhale it really didn’t kick in the buttery cookie-ness that I was expecting. Plenty strong and even @ 6%. Not getting a lot of butter in it (which is what I typically want with a cookie). Perhaps this is just a different type of cookie. For me (big CAP Sugar Cookie fan) it wasn’t what I wanted in a cookie. Something on the exhale that I wasn’t a fan of, the sweetener maybe ? Maybe for layering cookie bases perhaps. Feeling O.K. @ 3.5/10 for this.

Boysenberry Preserves (PUR) 6% (8-7-17) – 2 weeks steep, and this one nailed it RIGHT out of the gate. This one really hit all the main points, boysenberry, sweetness, tartness, preserves, check. Not sure how you go about adding the preserve-ish’ness to a flavor, but they did it. @ 6%, strength and sweetness were both on point, and continued vaping left me struggling to find any faults with this one, and cannot. Did make me want to mix up some more with some biscuit adds to see where that went. If you like a moderately sweet, tart boysenberry flavor with a side of “preserves” this one WILL do it for you. 10/10.

Nilla Wafer with Milk (PUR) 6% (8-7-17) – 2 weeks of waiting because I love nilla wafers. Sadly don’t think I’ll even be finishing the 3ml tester tank of this one. I have no clue what this is. Almost like an odd sugar cookie with some other strange notes maybe ? If I focus VERY hard, maybe I can make out an attempt at nilla wafers, but it’s just not there for me. Maybe getting some kind of condensed milk in there, but hard to tell as this is a hodgepodge of “not so good” for me. Maybe it’ll work for you, but for me, it was a waste of cotton. 1.5/10.

Strawberry Marshmallow Cereal (PUR) 6% (8-7-17) – Having grown up with Frakenberry cereal had a hard time waiting 2 weeks for this one, as it smelled very promising in the bottle. After waiting, was pleasantly surprised to find this was almost exactly Frankenberry cereal. For those that don’t know, it was an artificially flavored strawberry marshmallow cereal. Don’t get any “cereal” notes, but that’s just fine as the strawberry marshmallow and a hint of milk/creme are all over this mix. Even mix, sweeteness is good, and the strawberry w./ a smidge of milk is all very good. Now typically when I hear “artificial” I run for the door. It’s NOT in a bad way in this one, and works perfectly. It’s so good to my pallete that I cannot go less than 10/10.

Lucky Lephrecan (PUR) 6% (8-9-17) – 2 week steep to see if this would be any different than the other “Lucky Charms” cereals I’ve tried. Basically, it was right about the rest. Not terrible, not great, just average. Some are all punchy high notes, some are all low grainy notes, but I’ve never found one that does it all. This one’s in the ballpark, and surely could be a starting point for a lucky charms mix, but it just seems to be missing something, maybe the high end punch, not sure. Great cereal base with sweetness and some mallow. It seems to have nailed the cereal part pretty good, some grains but not overly so, the the really sweet marshmallow high end punch is missing. Not bad at all, just not IT. Because I’ve never found a single SF cereal flavor that did everything right, hard to fault this more than the others. Leveraging it @ 6.5/10.

Butter Pecan (PUR) 6% (8-12-17) – 2 week steep just to see how it would hold up against FW BP. Overall the mix was very even, but simply just average. Not terrible, not great, just average. Maybe use as a layering profile, but don’t think it could carry BC on it’s own. Middle of the road, puts it in as a 5/10.

Vanilla Custard (PUR) 6% (8-13-17) – 2 week steep to see if I could add this to my VC obsession list. After 2 weeks @ 6% this one was like a Custard Brick To the FACE !!! Sadly NOT in a good way. I’m a VC junkie, so I do not say this lightly. NOW, I will re-test it lower than 6% to rule out too heavy of a mix. It seemed like that could be possible here, it was an overwhelmingly cloying tankful with my tester. VERY eggy/eggish much like INW VC but stronger egg. Even though eggy’ness isn’t my thing, it wouldn’t have made this a deal breaker. Had an almost harsh aftertaste on the exhale. It was very sweet/strong @ 6%, like a stronger eggy’ier cousin to the INW. Because of the very sweet, heavy eggy, strange note on exhale wasn’t able to finish the 3ml tester on this one. Not a good score for me @ 6%. I have to go 2/10, but will RE-test at a lower rate and add that to this review.

Bavarian Cream (PUR) 6% (8-20-17) – Waited 2+ weeks to see how this would taste, and I’m a huge BC fan. My current go to is TPA. Smelled ok on the sniff, but vaping it revealed even LESS for me. Kind of a mish-mosh, bland-ish flavor with no real stand out notes for me, especially anything bavarian. Doesn’t mean it’s terrible, just means it’s NOT a BC for me. About the same inhale/exhale, and no exciting things showed up during the test to speak of. Nothing off-putting, just nothing really BC. Going to go with a low 1.5/10 on this one for me.

Banana (PUR) 6% (8-21-17) – 2+ weeks steep. I’ve not had great luck with bananas so wasn’t expecting much here. First things first, not too bad at all. Vaping while typing, leaves me unclear on exactly how the “real banana” vs. “candy banana” split is. It seems like both, but almost an even 50/50 split. Not too much of one or the other. Very full @ 6%, pushing from just sweet enough to MAYBE a tad heavy, but not in a bad way. Unsure how it would mix, but as a SF test, I’m actually pretty surprised. Not bad at all. Some fresh banana with some candied “runt like” notes to it. I think because it’s not one OR the other fresh vs. candy, it could be more versatile. Solidly placing this at a 9/10.

Cereal (PUR) 6% (8-22-17) – 2+ weeks steep. Cereals can be hard to explain, and this is one of them. Almost reminds me of a fairly sweet version of the grainy pieces in a Lucky Charms box, without the marshmallows. On the inhale the sweetness is very present without a lot of cereal or grain, on the exhale the ceral/grain steps up, but only a bit, with the sweetness still being the dominant aspect. Continued vaping reveals that there is not much “grain” in this cereal. Might just be too sweet, but that’s a personal thing. I personally prefer more grain, but not overpowering grain/cereal in my cereals. TPA Lucky Lephrechaun comes to mind. Overall the mix was fairly even, but for the rather sweet aspect. Because of my grainy/cereal needs, this one sits at a 6/10.

Raspberry (PUR) 6% (8-30-17) – 2+ weeks steep on this the LAST PUR flavor in this test run. I think the BEST thing about this one, was it didn’t taste artificial, and didn’t have any chemical notes. It was an ok RB, but very laid back. Some sweet, a little tart on the inhale, some more sweet and tart with some raspberry on the exhale. Wasn’t wowed by it overall, despite it being an ok RB. Lacked most of the punch that I want in a fruit, and a RB in particular. May re-test to see if increasing it makes a difference. Good flavor, too subtle @ 6%. Hard to to number it as the flavor wasn’t bad, just the quantity of it. Leaving it @ 6/10.

This recipe does not have a description

, but nonetheless great reviews @SessionDrummer, I think the only Purilum flavor I have is NY Cheesecake, but it’s one (of quite a few flavors) I never got around to. Looks like that one just got moved up on my to-do list