I know, I know, another Mesh Sub Ohm tank review, and this one coming up late to boot…I feel your pain. What we got here is the OFRF nexMESH sub Ohm Tank provided directly from OFRF for this review. 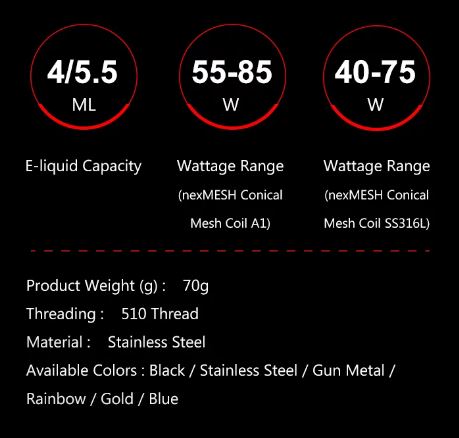 Getting to know the OFRF nexMESH sub Ohm Tank

Now you may already be familiar with OFRF, they hit the scene with there mesh strips designed for the Profile RDA and RTA as well as any other subsequent mesh tanks that use the same specs. They then introduced the Gear RTA which got a lot of buzz for sure. They recently introduced a new SS316L mesh strip, something I reviewed and enjoyed, just ordered another pack today.

The nexMESH subohm tank they have introduced a new conical mesh structure, wider at the bottom and tapers smaller at the top, looks like this. 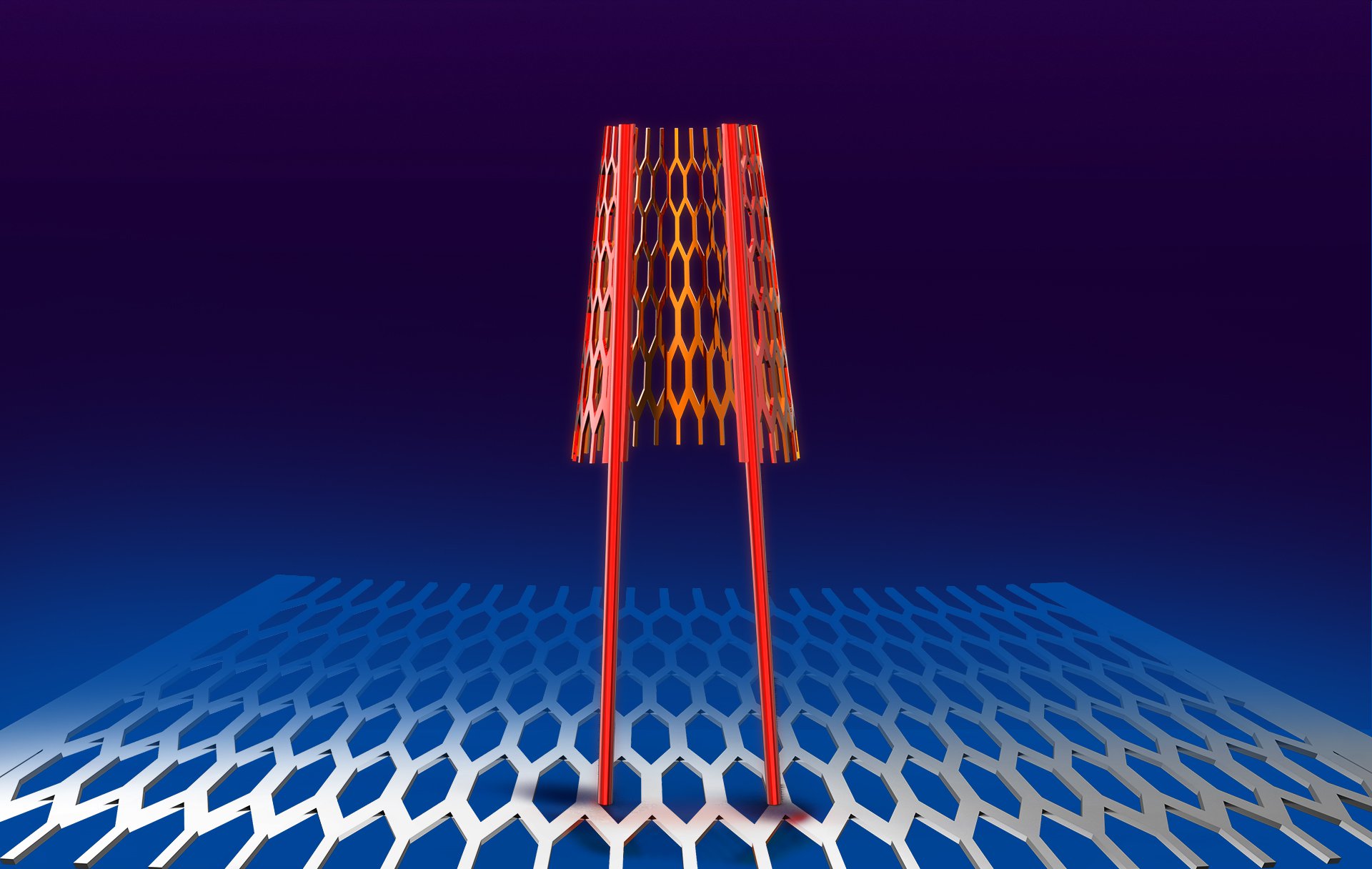 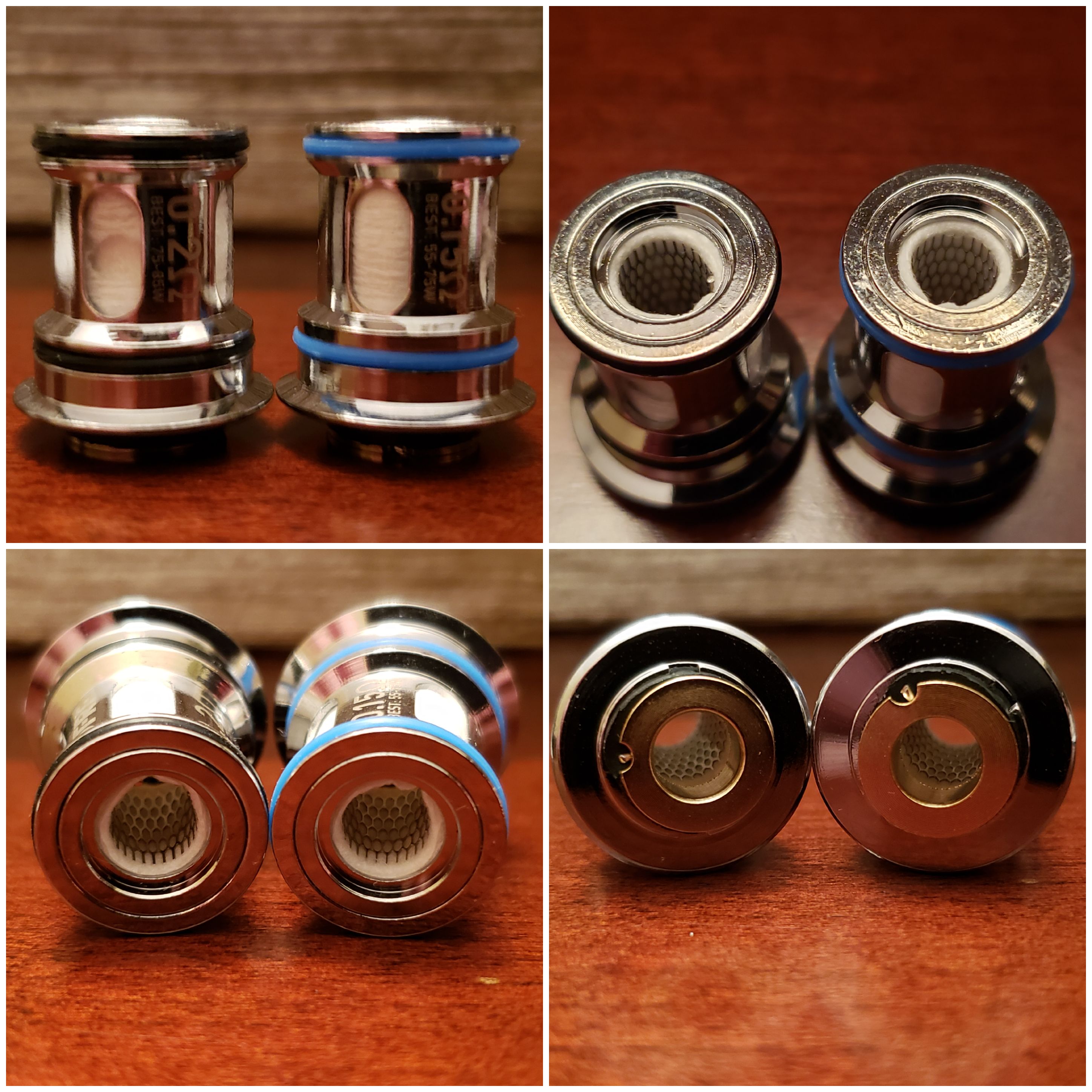 Not a lot of parts to it, here it is broken down. 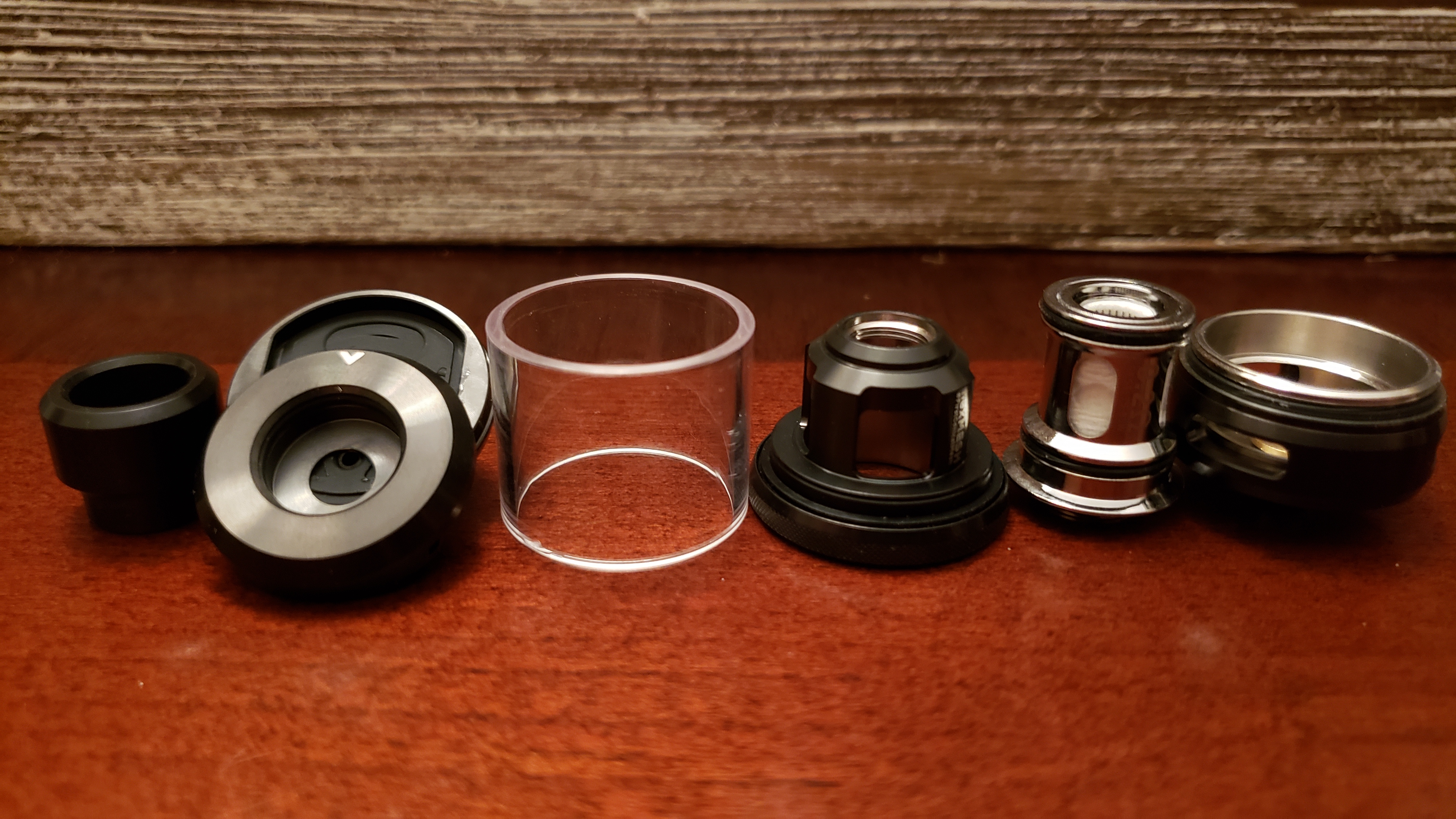 The threads are a little squeaky, not as smooth as I would like it but they catch easy enough and never felt as though cross-threading would be an issue.

I have had tanks that had the spill guard, that little rubber membrane that you pierce with your bottle tip to fill up. I usually rip it out the first day but this one works well with gorilla bottle tips and droppers. The only thing that gave me issues was bull nose bottles, they won’t fit. 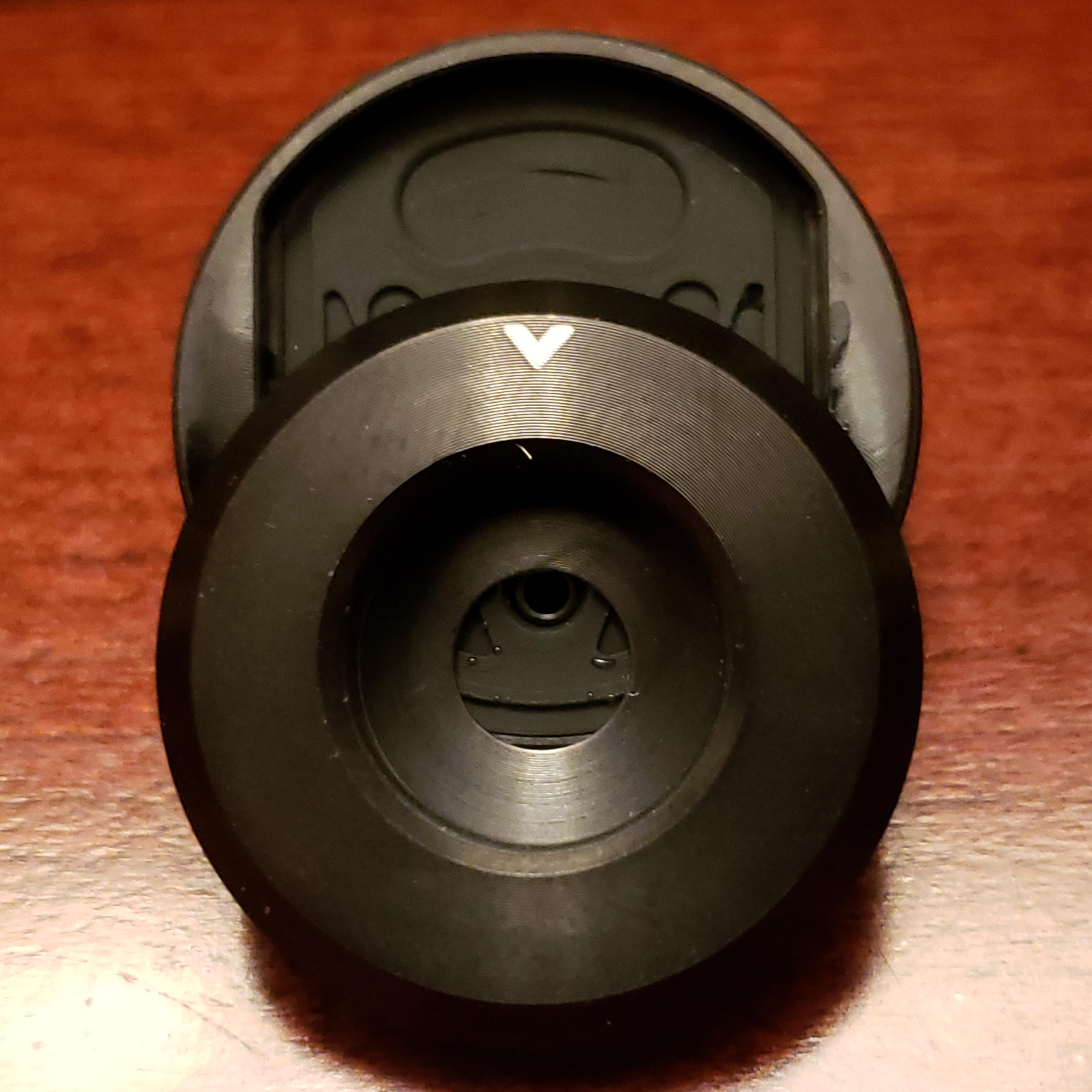 Not a fan of slide tops, a trend that I hope goes away. That said this is one of the better examples, has good tension, the black version better than the SS version I have though. Still would not trust it in my pocket, no locking mechanism means you might get a juice bath in a pocket or purse.

Comes with a straight glass made of PCTG tube, the bubble glass is called glass so I am guessing it is not made of the same material. The straight glass looks and feels like glass to me but is said to be tougher, not as easy to break. I used the bubble for my month of testing on one and the PCTG straight on the other and no ill effects from different juices. 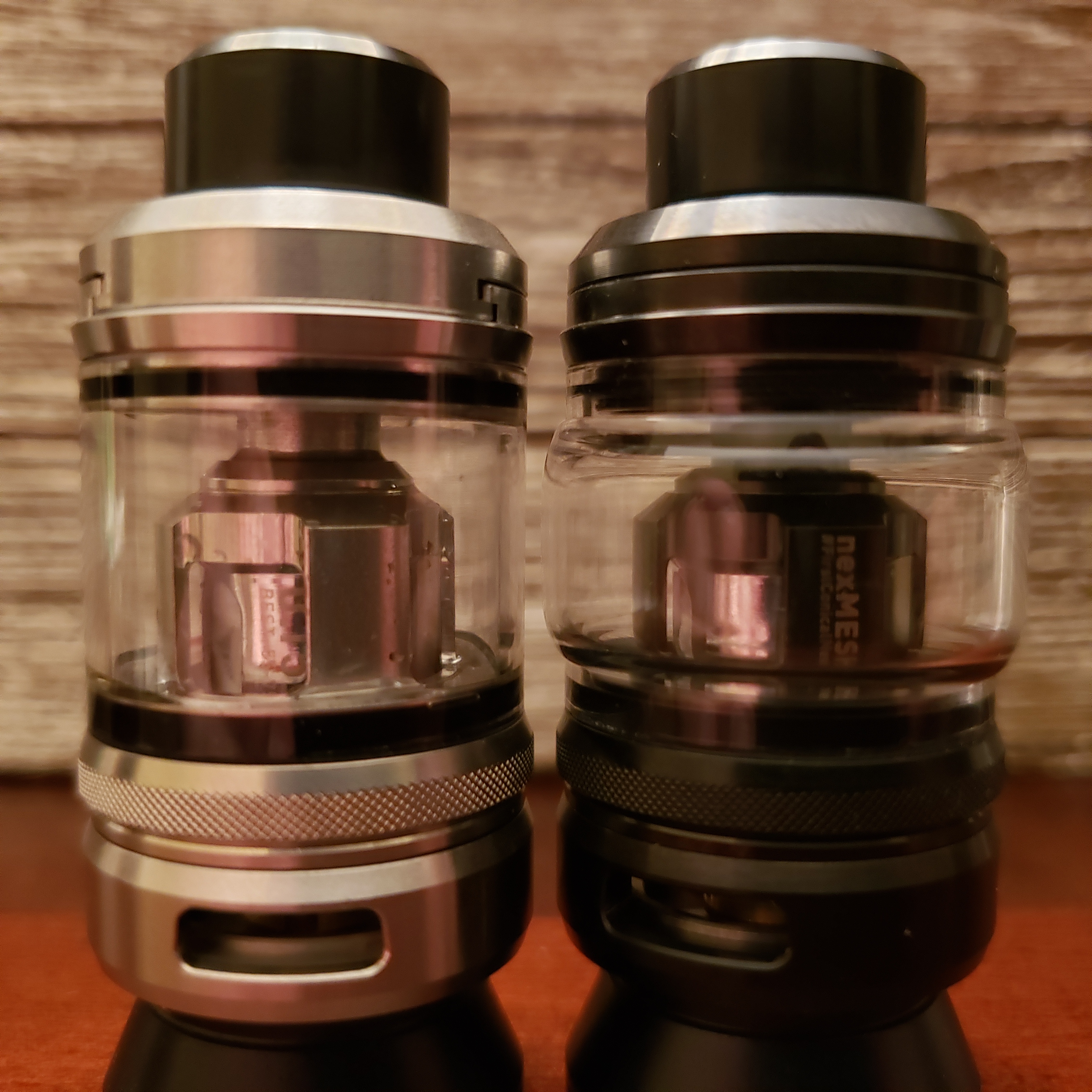 Stated capacity is 4ml for the straight and 5.5ml for the bubble. Using a syringe I measured just a tad over both stated amounts so good job there.

Enough jibber-jabber, how does it vape?

I used the SS316L coil in one and the Kanthal (A1) in the other for all my evaluations. Right off the bat in power mode, I preferred the SS316L coil, just gave me better flavor. After a week I actually thought the Kanthal coil may be a bum coil so switched that out for a new one. It was better for sure but still, I gravitated to the SS coil. Even in TC mode the SS coil just gave me cleaner flavor over the kanthal, this was using the same juice from the same bottle. It is not a night and day difference but I could tell which was which even if I closed my eyes.

For TC the SS coil worked well for mesh, which is to say not exactly what you expect but decent. I would generally run it 20f higher than my normal TC builds but had to lower that when the tank was running low to avoid dry hits. Still, an enjoyable TC vape but don’t expect accuracy which plagues most SS mesh, it is just a different animal. When applying TC to mesh make sure your watts are at a sensible level and turn off preheat boost. Mesh ramps up super fast and TC can have a hard time keeping up, it will eventually catch it but you might wind up with dry hits before it does. Definitely one of the better SS mesh coils for TC though, I did find it enjoyable and I used it in TC for the majority of the time.

The upper power range is pretty accurate. I can easily vape the Kanthal at 85 watts and chain vape it with no dry hits, the same with the SS316L at 75 watts. I like them both a little lower though, if not they can get pretty hot when chain vaping. I preferred the Kanthal at 70 watts and SS at 65 watts, making it a little more manageable for chain vaping and the flavor did not suffer much if at all depending on juice used.

I have to note that I got a little leaking with both coils the first day but after that no more leaks. I am on my second set of coils and still, no leaking. I think it might be due to cleaning the tanks prior to using and the o-rings were dry, once they had a layer of juice they seemed to seal right up. You might want to add a layer of juice to the o-rings after cleaning for a better seal.

To keep it fair I only compared it to a single kanthal mesh from Freemax, since my other Mesh Pro tanks had fresh dual and triple coils in them I used the CKS Bolt mesh tank that uses Freemax mesh pro coils. 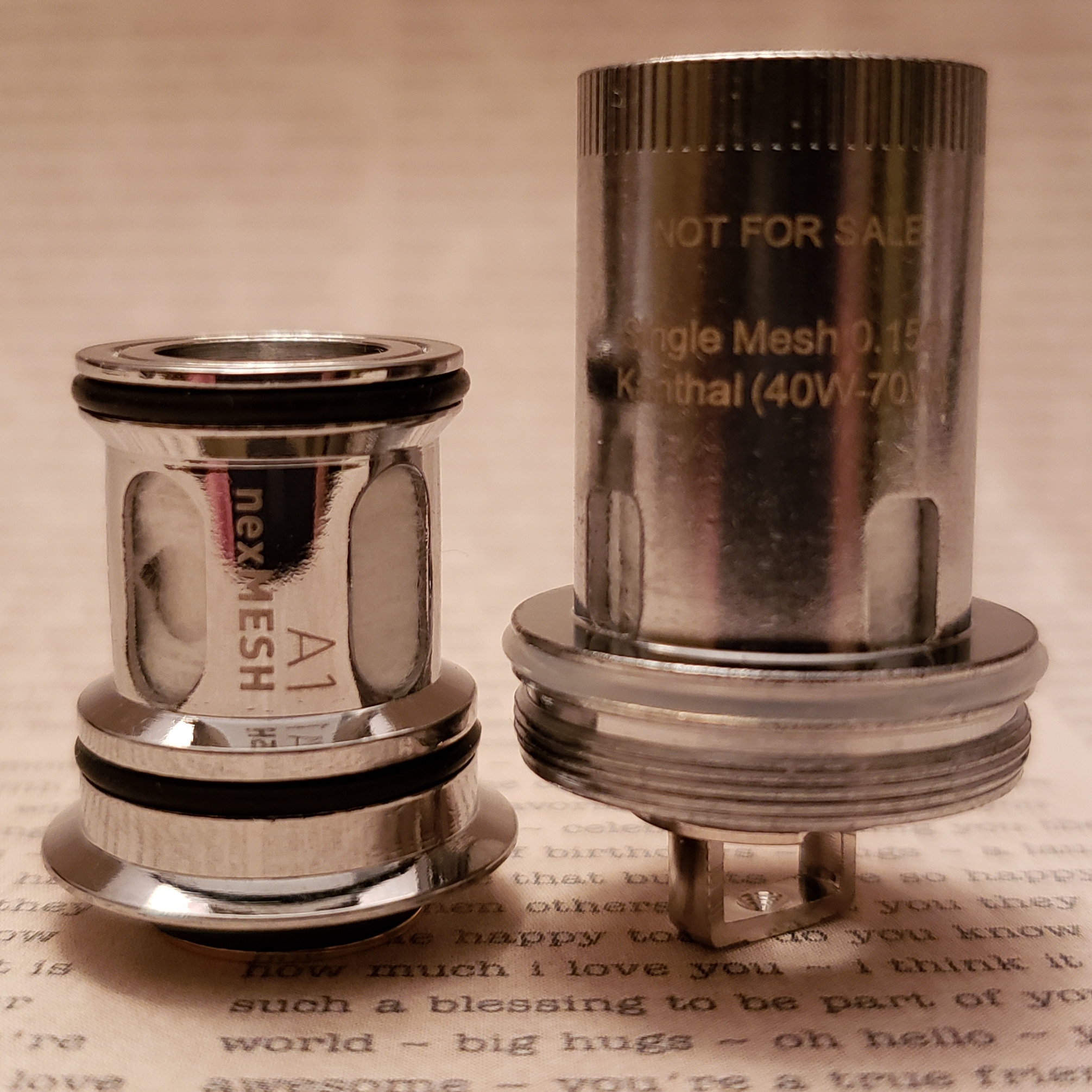 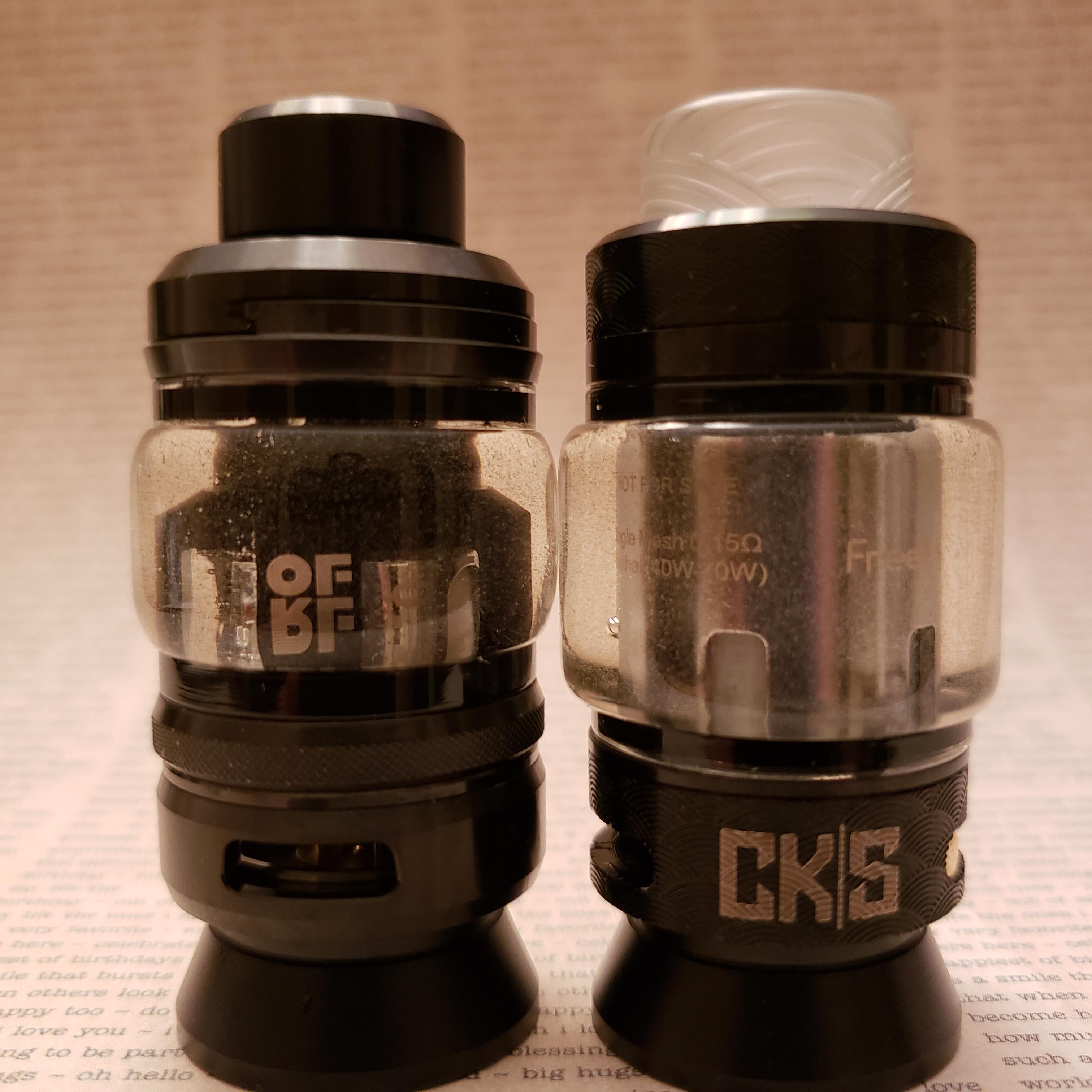 Now I have to admit I am not a fan of single-coil mesh ever since dual, triple and quad coils came out. The OFRF did spank the single Freemax coil though, better flavor and a more enjoyable vape overall. For a single coil, it is one of the best I have tried recently but didn’t have any other single-coil mesh to compare it to aside from the Freemax.

Of course, comparing apples to oranges can be fun too, loading the same juice into a dual-coil mesh tank is not exactly fair but what the hell. This is where the OFRF falls short, can’t compete with the flavor and it is what I was expecting after testing so many single-coil mesh to the multi-coil masses. I do have hope though, if OFRF can design a single-coil mesh that can perform like this then I eagerly await the multi-coil mesh options which I am sure they will eventually do. If you are a fan of single mesh coils then this is a good option, performs well in that category.

Yeah, I enjoy taking things apart, putting them back together again…nope. Was anxious to see the mesh up close though and also how the coils held up. 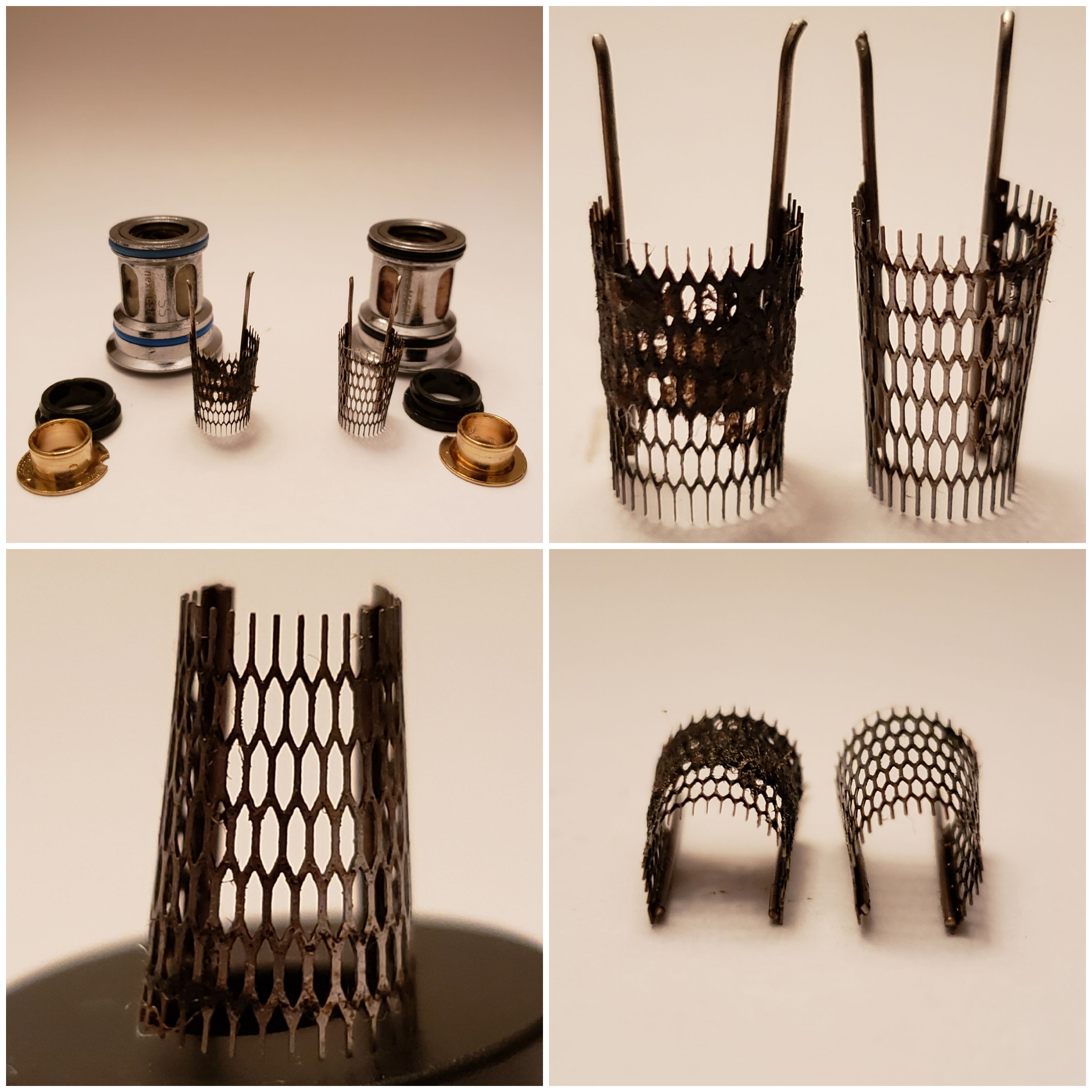 The gunky coil on the left is the SS316L which I used for more than 3 weeks, on the right is the Kanthal which I only used for 1 week before swapping it out as the performance was not what I was expecting. Part of the cotton was also stuck to the SS mesh, that is why it looks extra dirty. The pic below is what they look like flattened out and given a rinse to remove a little gunk. 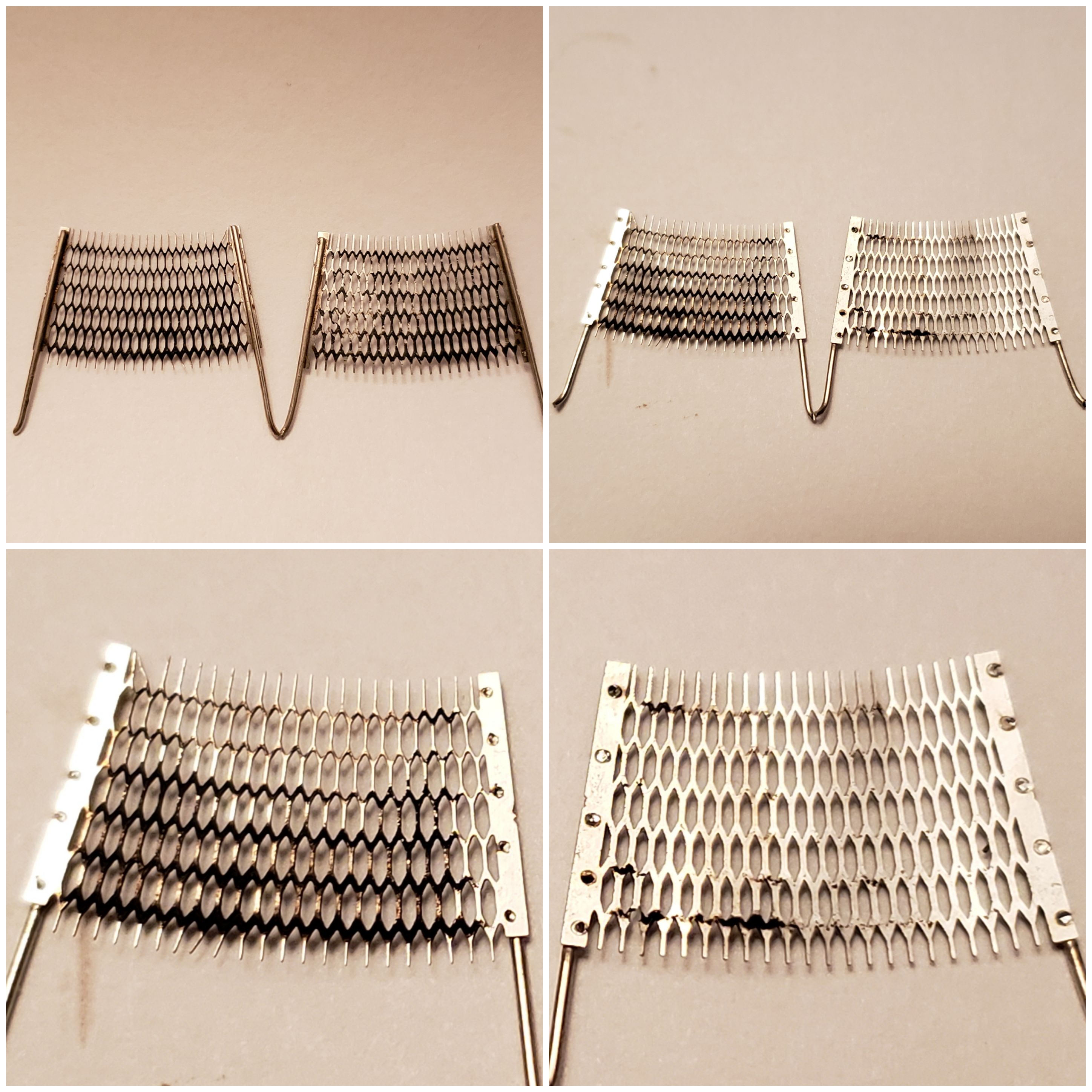 Really not too bad considering how much juice I ran through it, I have definitely seen worse. Pretty satisfied with coil longevity with the SS and the new kanthal I swapped out the first one with is still good after more than 2 weeks. You can also see the SS mesh on the left uses a thinner wire, this may be what contributed to the better performance I experienced. 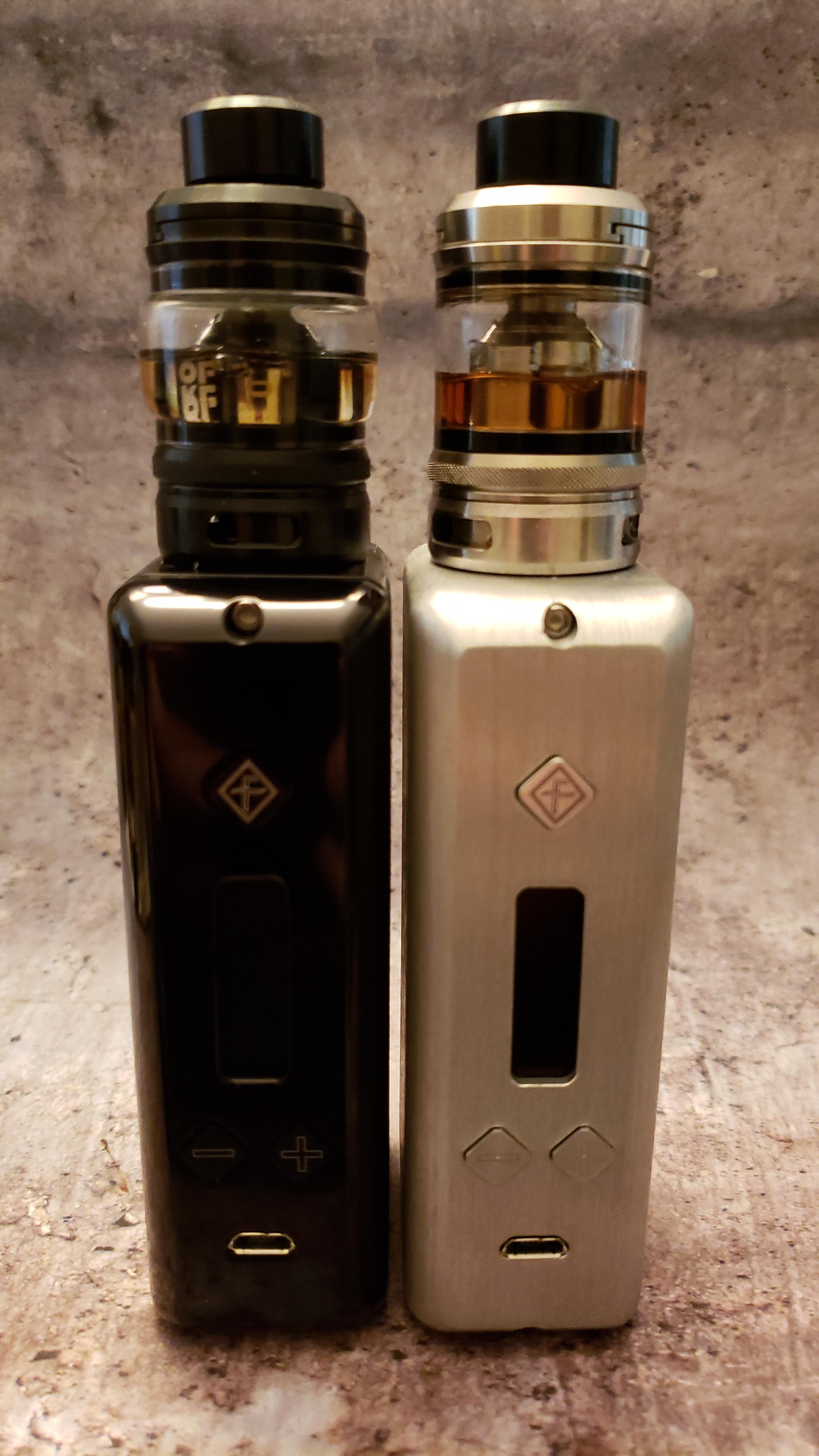 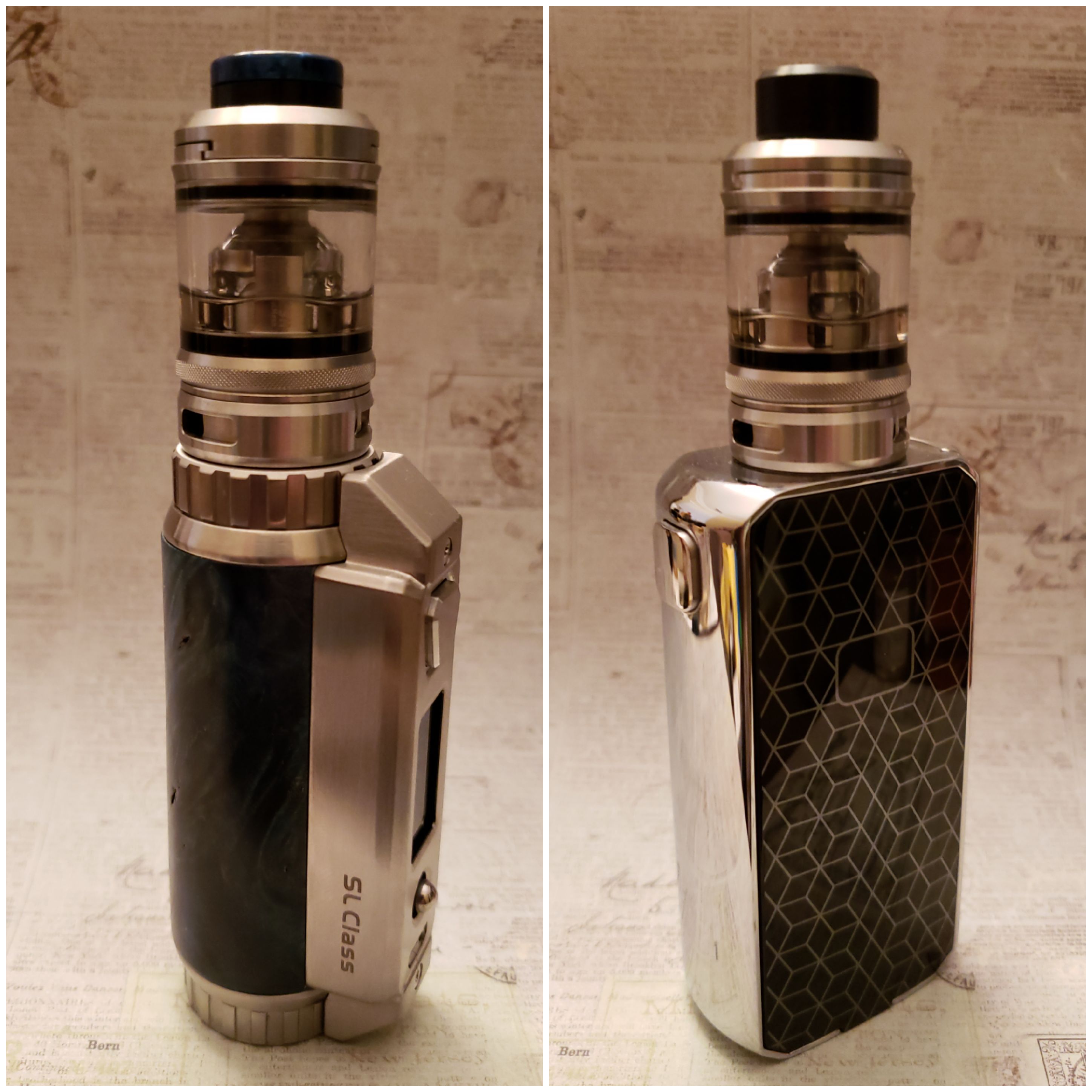 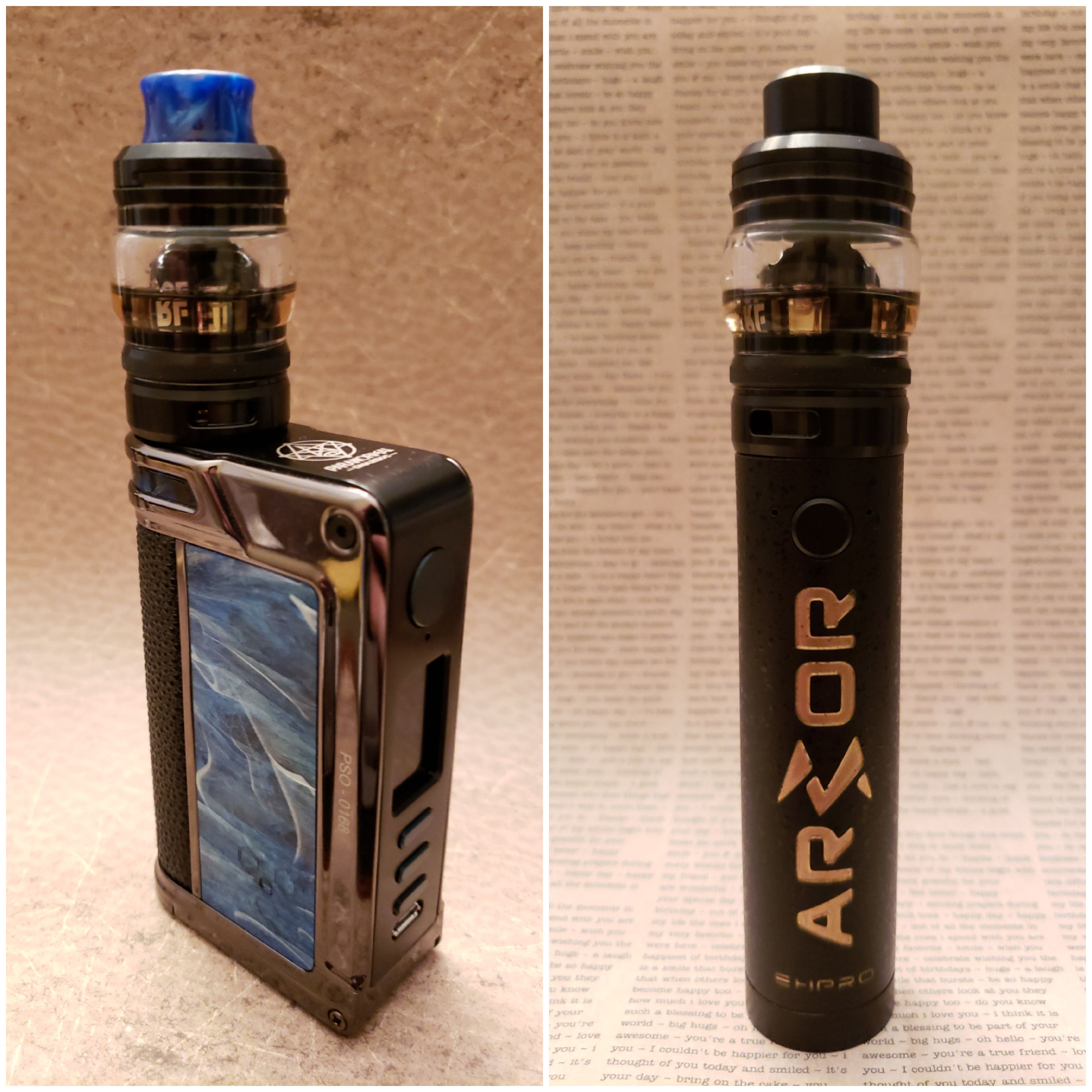 I do appreciate the work that OFRF put into the nexMESH sub-ohm tank, shows a level of detail that gives me high hopes for there future products. If all you use is single mesh coils then I am sure this will satisfy you, I enjoy it in that context. If you are expecting dual or triple coil mesh performance then it is going to let you down. They have shown they know mesh though and I would be shocked if a dual or triple coil isn’t already in the works, a triple might be too much to ask though considering the size of the coil space.

I do like the OFRF nexMESH sub-ohm tank but will wait and see if they release a dual coil, based on how the single performs I would buy the dual coil in an instant. I just can’t go back to single coil mesh though, not when I know what multi-coils can do.

If you want to find out more they have a lot more info on their website at: https://www.ofrf.com/nexmesh-sub-ohm-tank

Thank you Garry, I appreciate it my friend

Yeah, I like how they go about things and they seem to have some great engineers there, all there products so far have been a hit. I am really interested to see what they come up with next.