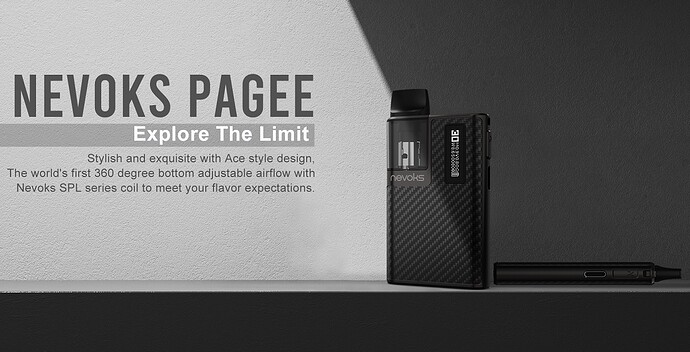 In their short existense Nevoks have become pod device specialist and have shown as their devices have progressed they listen to feedback in an attempt to bring the vaper products they require! I have only just reviewed the Veego 80 which was a SBS Pod Mod with 510 thread adaptor and with the Pagee we see a return to the “Credit Card” style pod device which we saw about 18months ago!

Like the Veego 80 the Pagee ticks a lot of boxes and also brings us what’s claimed to be the first 360 degree bottom adjustable airflow! It offers both button activation and Auto Draw, has adjustable wattage and is said to be for both MTL and RDL styles, Let’s crack on! 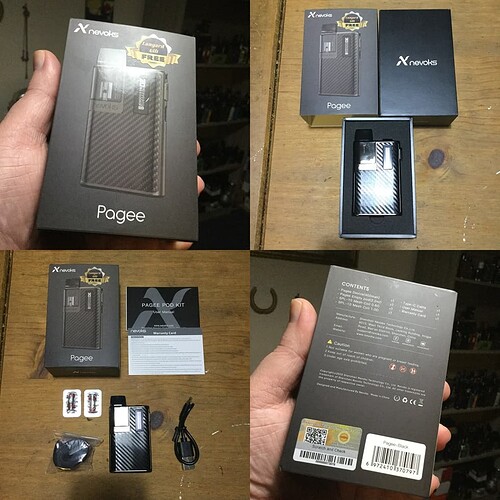 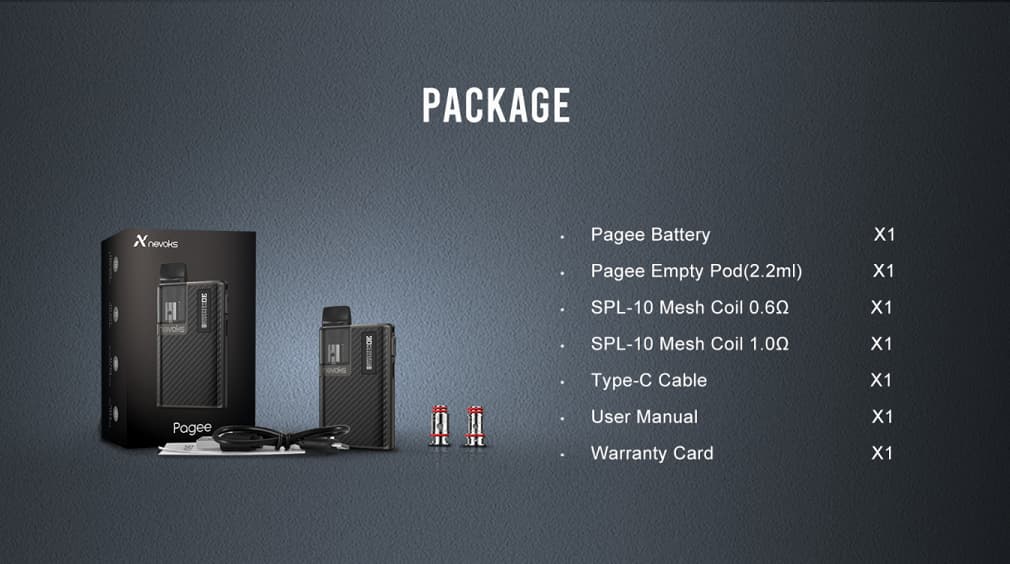 The Pagee comes in cardboard box packaging with outer cardboard sleeve, on the front we have a picture of the device in the chosen colour and contents etc on the reverse. I received the Black version which has a Gunmetal Zinc Alloy chassis and Black Carbon Fiber effect panels both sides, the options are Black, Violet Rainbow, Dark Green or Space Grey, the colour refers to the Carbon Fiber effect side panels!

At only 70g the device is lightweight and even for what’s become known as “Credit Card” style devices this must be the smallest I have used yet. We have a tinted flat pod with Delrin 510 drip tip, the drip tip is quite wide but has tapered sides to give it a flattened look! Below the pod on the main chassis on one side we have “nevoks” and on the opposite side “PAGEE”, within the Carbon Fiber effect panel on one side we have a small screen!

Down the spine of the device we have towards the top a protruding rectangular fire button which has the Nevoks logo embossed into the metal button, below in a vertical position is the Type C USB port. Above the fire button we have an opening and then looking at the top rear we find the opening at the top of the spine comes out here forming a rail for the included lanyard to be attached, staying up top we also have a protruding rectangular wattage adjustment button.

Moving to the base we have branding, venting holes and to the leading edge a plastic adjustable dial for airflow control. The device just gets swallowed up in the hand so is ideal for when out and about! 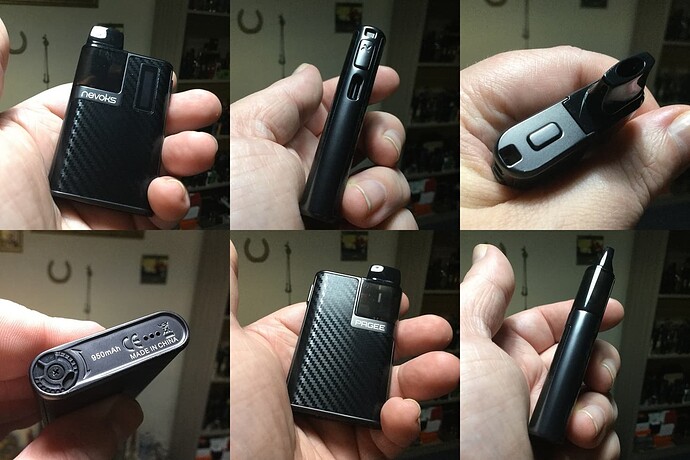 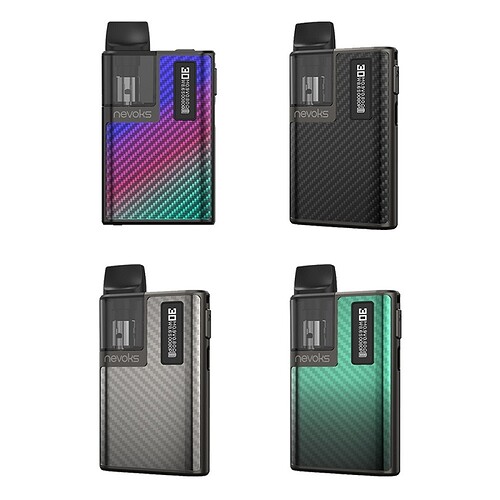 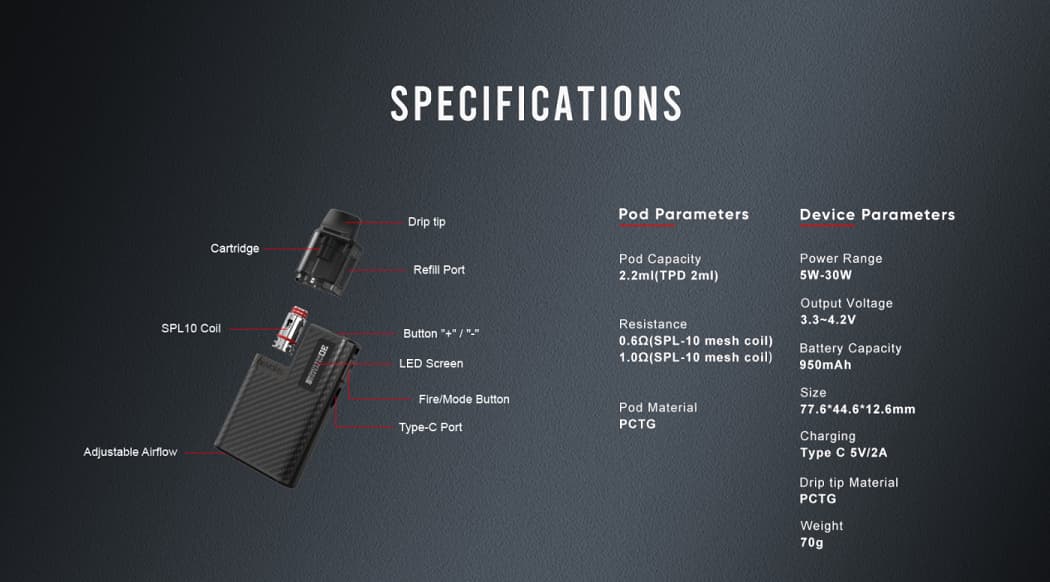 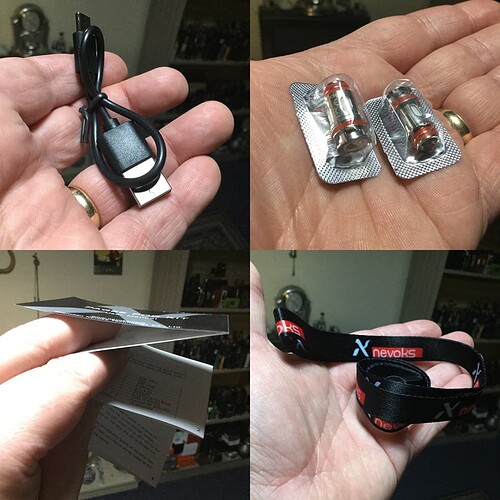 The Pod is a flattish almost square shape and although tinted I had no issues seeing the juice level inside. Up top we have a wide drip tip with tapered sides which can turn to have in the most comfortable position depending on how you hold the device, it is also a standard 510 fitting so like me you could also fit an alternative if you prefer!

On the side where the pod slides into the bay so will be hidden from view we have a silicone bung which can be pulled out (while still remaining attached to the pod) to reveal a good sized fill port, as side fill ports go I had no issues being able to fill fast, mess free while completely filling the capacity!

Moving to the base of the pod we have the cylindrical opening for the coil head to be fitted, to one side we have a large magnet and to the other quite a large opening which will feed air to the coil head, this opening lines up with the airflow opening in the pod bay which gets fed by the bottom adjustable airflow control! 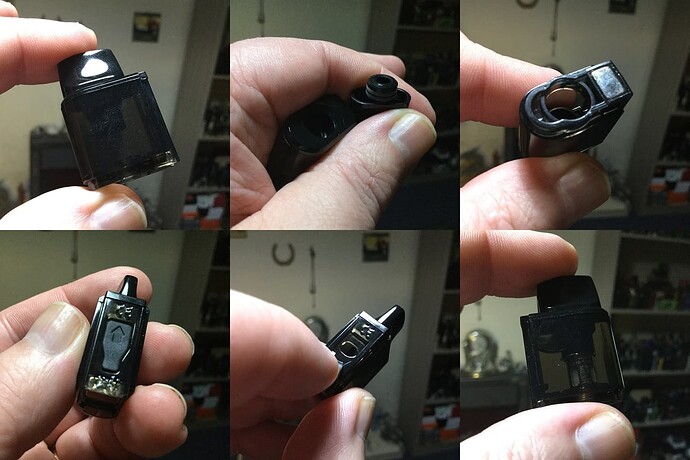 The Coils and Fitting Them

The Pagee Pod deploys the usual plug and play method we see with most of the popular pod mod pods so the coil head just gets press fitted into the pod where it will be sealed via an O-ring and will also seal to the chimney via the top set of dual O-rings. 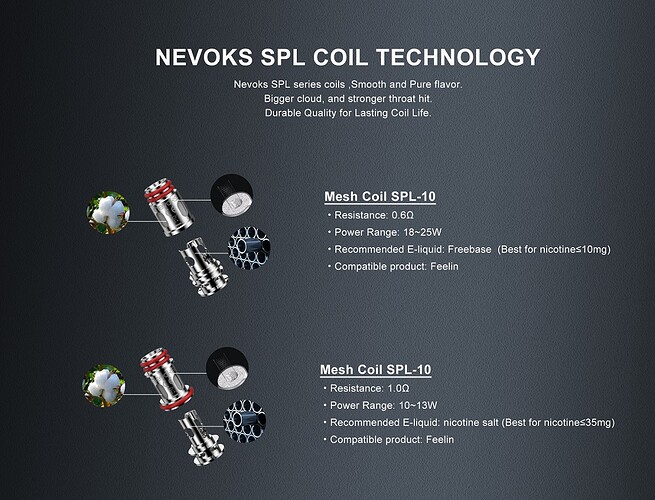 The pod fits via the vertical rail on the device and also strong magnets, we have no play whatsoever! Looking inside the bay we can see the Gold plated positive and negative contacts and large opening which leads right down to the airflow control. We also have two rectangular magnets and the opening to the membrane switch for draw activation! 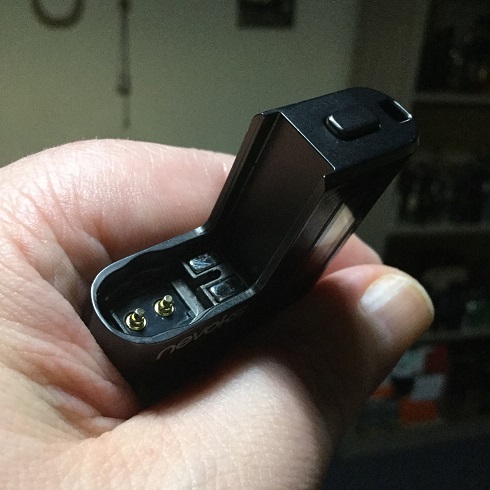 This interested me most before using the device and although the airflow control works quite well when compared to similar sized devices which usually have fixed airflow I was quite disappointed and feel the all 360 degree marketing is a con!

On the bottom of the device on the same side as the pod bay we have a small airflow slot which I guess is about 4mm and then also a slot on the dial the same size. Obviously when the two slots are lined up we have full airflow but then it can be closed down.

I actually like the idea of an adjustable bottom slot which feeds the slot above in the bay which in turn feeds the coil head but it’s just a 4mm slot so yes you can pointlessly turn the dial 360 degrees but it’s not 360 degree airflow adjustment as claimed they just couldn’t be arsed to fit stoppers! 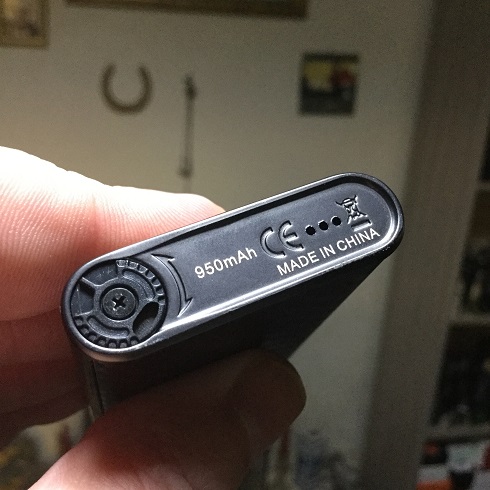 We have a much loved old school style of display but unfortunately it’s identical to the display on the Veego 80 with the layout just being a bit of a mess. We have both vape duration and 4 digit puff counter rather than the puff count showing duration while vaping and when all 4 digits of the puff counter are in use their is no gap between the two pieces of information. Also we have no gap between the voltage and resistance and when the mode is Manual “M” is displayed between the wattage and voltage readings where there was a space and the whole display just becomes a solid block of numbers and letters! 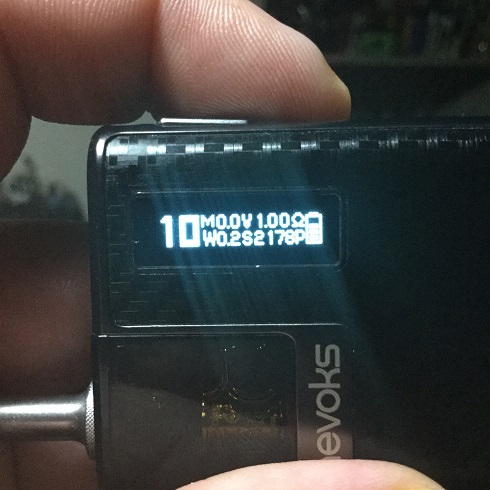 To the left of the display we have the wattage and to the right of that at the bottom we have “W”, if in manual mode we will also have an “M” above the “W”!

To the right of the wattage at the top we have the voltage followed by the resistance. Below to the left we have vape duration and to the right a four figure puff counter which only reveals any field that is in use so 0029P would just be displayed as 29P, finally to the right of the display we have a vertically positioned battery status bar!

The Pagee has a very basic chip and old school display which is all many people require. The device is the usual 5 clicks of the fire button to turn on and five clicks to turn off and once on fire and the wattage adjustment button pressed together locks the whole device including the fire button, although it still allows you to vape using Auto Draw! In fact if you lock the device while in manual mode it will automatically change back to standard mode when locking to allow the Auto Draw feature to be used! The only other combination button press feature is done with the device turned off which is once again the fire and the wattage adjustment button pressed together which resets the puff count! 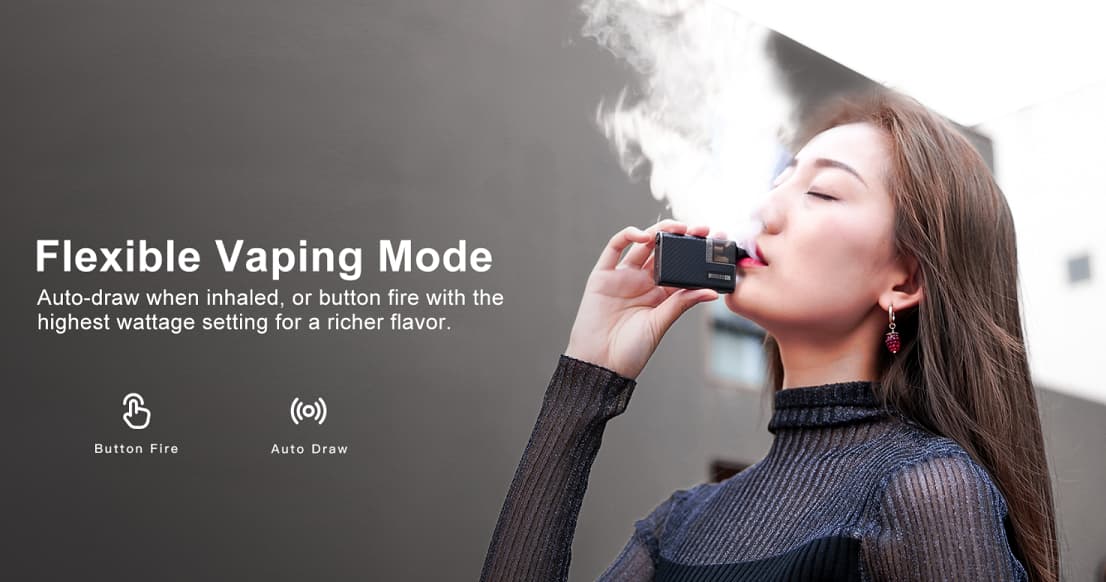 The wattage adjusts in 1w increments from 5w in theory up to the max 30w but the device operates in smart mode by default and it can’t be overridden! So with the 1.0ohm coil it adjusts up to 15w and with the 0.6ohm coil up to 25w, also the adjustment can only be increased and not decreased so if you overshoot the wattage intended you have to use the round robin feature to get back to the wattage required, a bit annoying but it scrolls quickly when the button is held down and being such a low wattage device not a deal breaker! 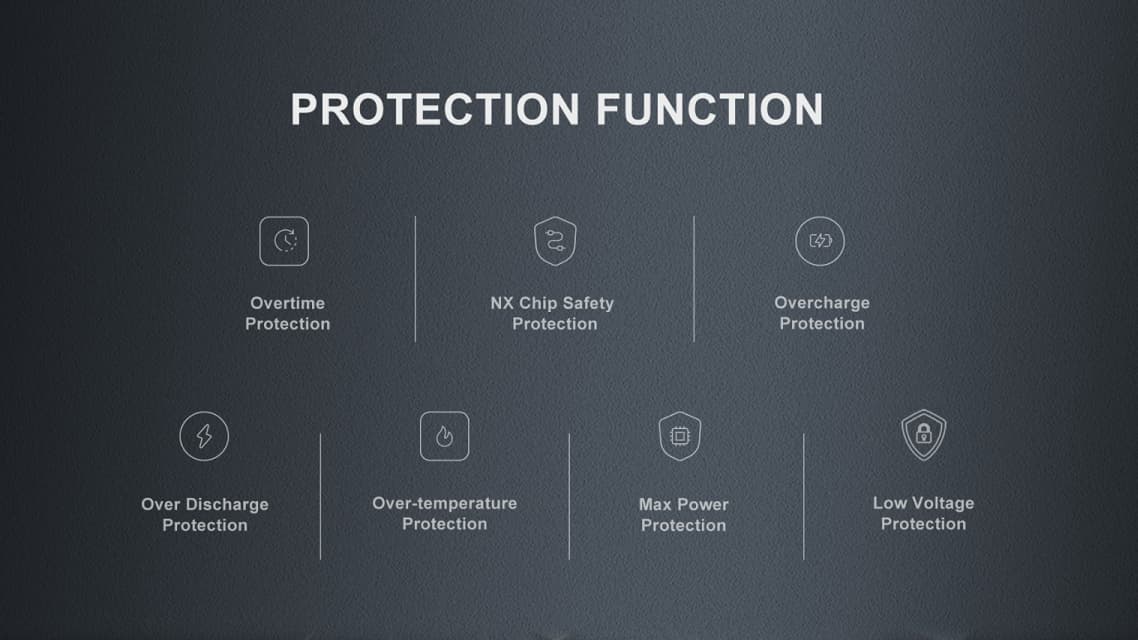 Very impressed with how quickly the Pagee charges. It has a Type C USB connection and 2A max charge rate! I timed the charging progress on 3 occasions and each time it took (+/- 1) 50 minutes. While charging a charging progress bar is displayed along with the charge as a percentage, it also supports pass-through vaping!

The Pagee gives a fantastic looser MTL and RDL vape, nice and smooth and the flavour from both coils is outstanding which didn’t surprise me as I really rated the coils when I used them with the Feelin device! Also good to see adjustable airflow although don’t expect anything ground-breaking as it’s just a 4mm adjustable slot adjusted by a dial which is quite fiddly and the whole amazing 360 degree airflow marketing c**p is just that!

I actually thought at first this gave a nice tight draw until I realised I was resting the device on my little finger while taking a vape which was actually blocking the airflow! With airflow not blocked it gives either a medium or loose MTL with the 1.0ohm coil and various RDL to semi restricted draws with the 0.6ohm coil, just far too much air leakage to get tighter draws!

I like that you can fit your own 510 and despite the tinted pod visibility of the juice level is very good, not keen that the pod needs removing to be filled but it was a quick and a mess free experience when refilling! I like that the coil heads are the same that are used with the Feelin and as the full 30w isn’t utilised with the included coils due to the smart wattage feature then I can only guess other coils will become available!

The wattage only adjusting one way is a con but not a massive issue on this device and I love that it allows either Fire or Auto Draw and it also has a mode to turn the Auto Draw off, I also like that when the device is locked the Auto Draw will still work!

The performance I found to be very good and as tends to be the case these days the Auto Draw was very responsive! The device is tiny which I like a lot but it does leave me a bit sceptical whether at 950mAh they are slightly overstating the capacity although compared the the Caliburn A2 I reviewed recently this gives much better battery life and with all it’s features and display I found to be a better device! Like with the Veego 80 the Pagee has no Voltage boost but is not much of an issue using with the supplied coils, i noticed no drop off in power with the 1.0ohm coil and it was barely noticeable with the 0.6ohm!

We also have a Type C connection and 2A charge rate allowing the device to be charged in just 50mins while supporting pass-through and giving good charging feedback! 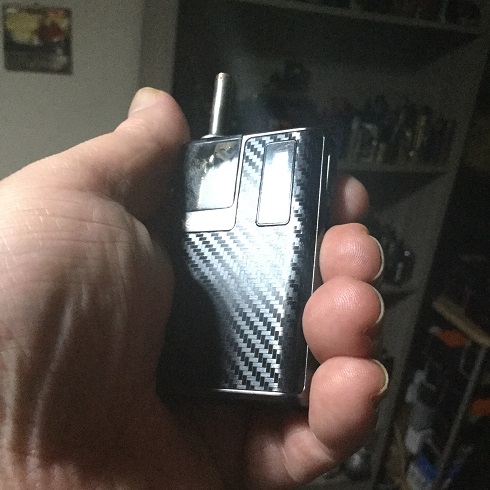 I would once again like to thank Agnes for supplying the Pagee for the purpose of this review, thanks for reading and stay safe!

Nice looking pod system there @Timwis. Great review of it.