Nevoks are a relatively new manufacturer being founded in 2019 during the beginnings of the pod/AIO trend so have concentrated on such products. The Feelin is a pod device offering different power settings, different airflow options and the choice of either draw or button activation. Coming in 4 colour options i had a good “feelin” about this one so let’s check it out! 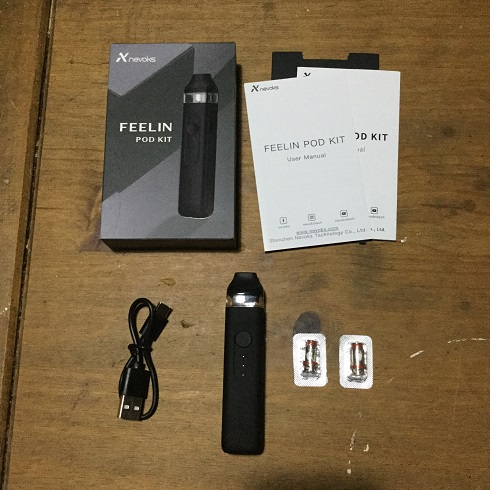 The Feelin comes in cardboard packaging and on opening i was met by a stealthy cuboid pod device with a tactile rubber like coating. The device is plastic but is made well and with that really nice coating certainly doesn’t feel cheap. I received the Black version, it’s available in Red, Silver, Blue or Black and all colours look nice in my opinion.

Up top we have a protruding pod giving a 360 degree clear viewing window with a comfortable Black mouthpiece that tapers from both sides as well as front and back. The top section on the mouthpiece has the same rubber like TPE coating as we see covering the device. On the face of the device we have a pill shaped indentation which houses a round concave fire button top and then a vertical column of 3 LED lights beneath, the bottom half of the face has “nevoks” embossed into the surface. On one side we have the airflow inlets at the top and then underneath in a vertical position towards the face we have the Type C USB port with printed charge rate specifications. On the rear towards the bottom we have “FEELIN” printed and printed safety marks on the base.

The device is very comfortable in the hand and can easily slip into a pocket making it ideal for on the go!!! 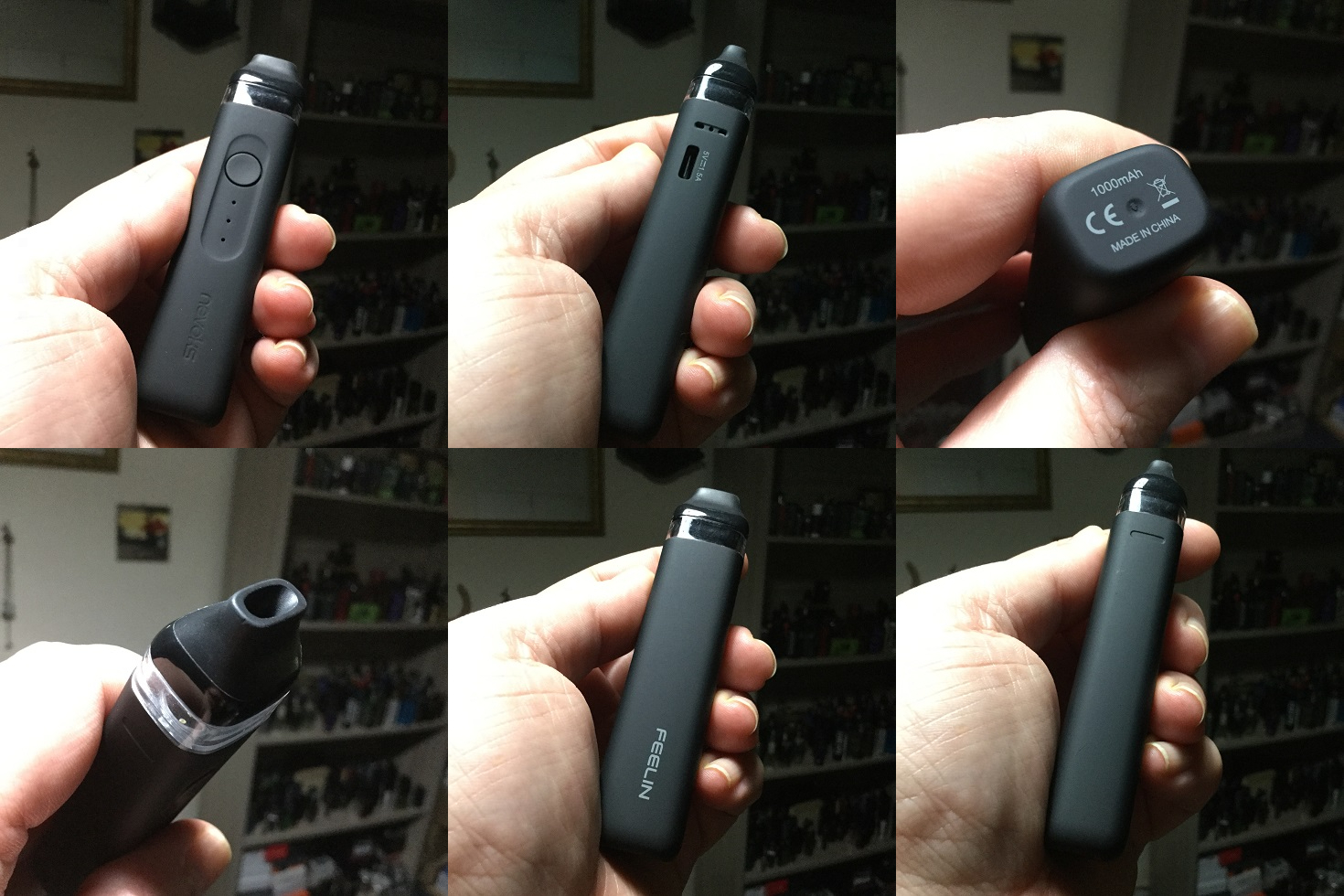 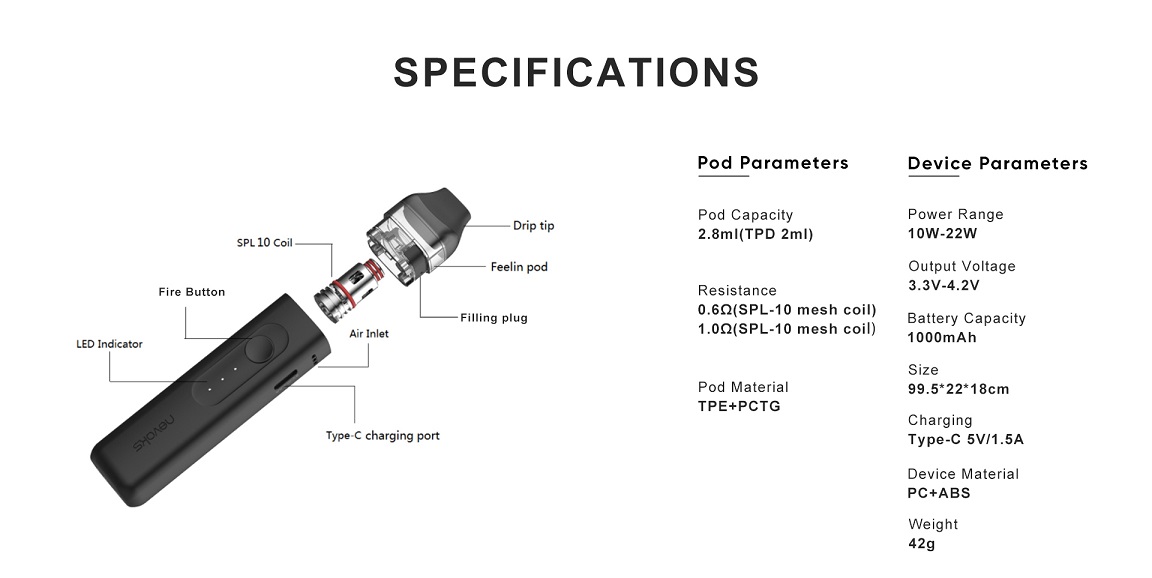 The Pod is rectangular with a frosted bottom section and clear main section which protrudes outside the device acting as a 360 degree viewing window. To one side on the lower frosted section so it will need removing from the device to fill we have a silicone flap with attached plug which needs lifting to reveal a very generous fill port. The flap has an arrow showing where to lift and sometimes these flaps can be fiddly to either remove, fix back in position or both but on the Feelin pod it removes and secures with ease! Filling is quick and mess free, the capacity is 2.8ml with the standard pod and 2ml with the TPD version. 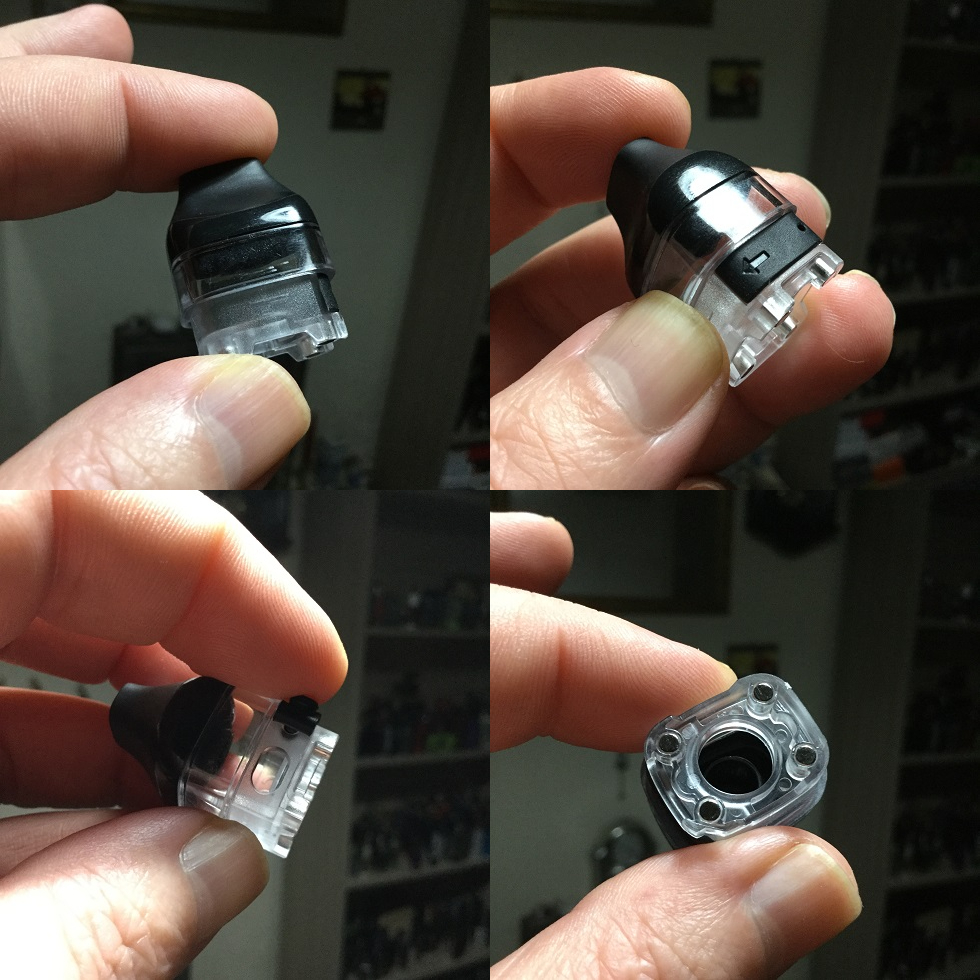 Up top we have a comfortable mouthpiece so no drip tip allowing your own to be fitted, it slants inwards both front and back as well as from both sides and the inner bore is suited towards either a loose MTL or RDL draw. Moving to the base we have the cylindrical opening for the coil head to be fitted and a small magnet to each corner. 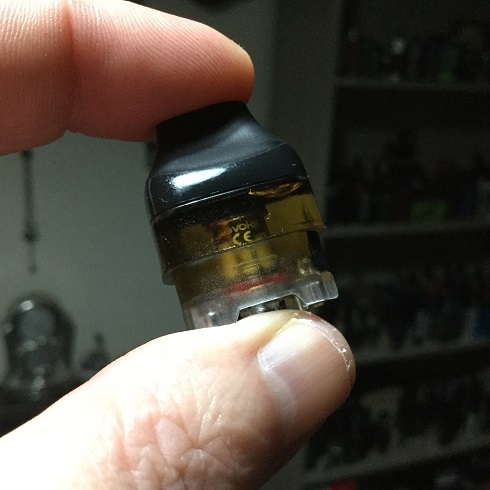 The coil head just gets press fitted into the pod via the cylindrical opening at it’s base.

You receive 2 different coils with the kit none of which are pre-installed and both are SPL Mesh coils which has leak resistant technology. You receive a 1.0ohm coil head with narrow internal bore and is rated between 10w to 13w. The other included coil head is the 0.6ohm which has a wider internal bore but still quite narrow being narrower than most coil heads with a similar resistance, this coil head is rated between 18w to 25w. 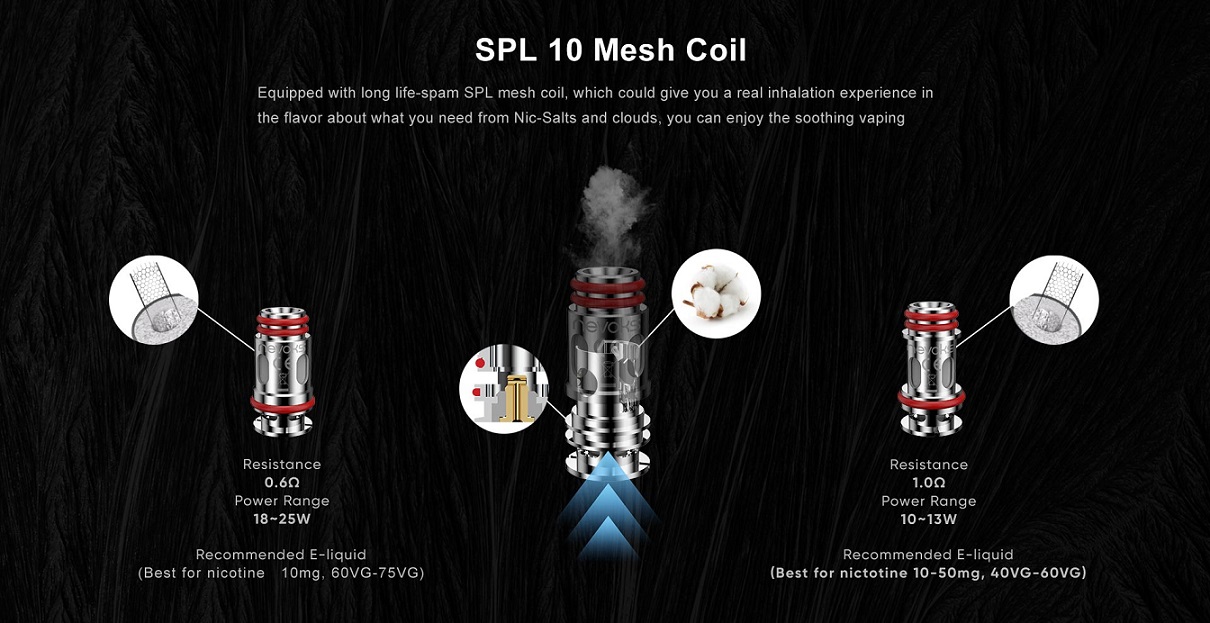 Looking inside the pod bay we can see the Gold plated, spring loaded contacts on a slightly raised surround and to one side the airflow tube leading to the membrane switch. We can also see the 3 airflow holes and a magnet to each corner to line up with the ones on the pod. 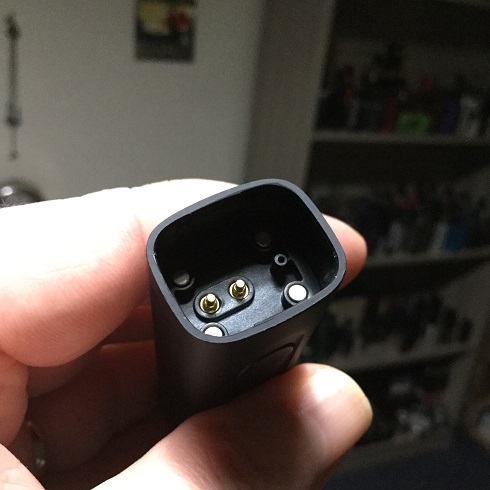 The pod fits extremely securely giving no movement whatsoever, to remove it needs gripping then give a strong pull, cracking job! 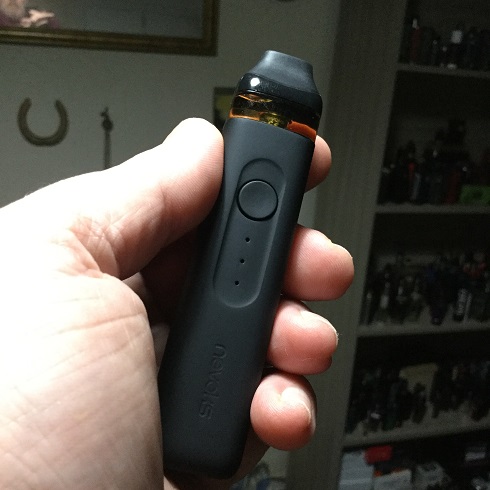 The Feelin is the usual 5 clicks of the fire button to turn on and 5 clicks to turn off and each action is confirmed by the cycling through of the three White LED indicators, bottom to top when switching on and top to bottom when switching off. Once on you can fire the device by pressing the physical button or simply take a draw as the device also offers Auto Draw!

The device has three output settings which are indicated by how many LED’s light up after 3 quick clicks of the fire button. Each 3 clicks takes you to the next level and the corresponding LED’s stay lit for 2 seconds before fading out. The settings and what they equate to in wattage are the following: 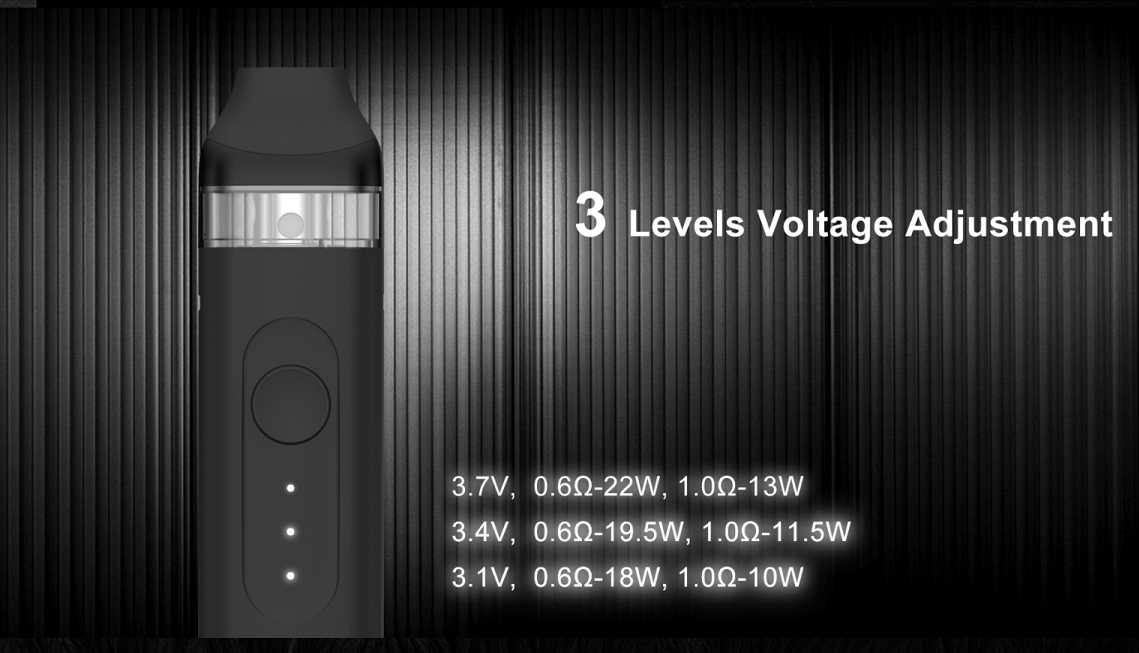 The device also has battery status indication which is shown by how many LED’s light up while taking a vape by either using the fire button or by Auto Draw, you can also just give the button a quick click to check at any time. After releasing the fire button or finishing your Auto Draw the LED/LED’s stay on for 2 seconds before fading out, the LED indications correspond to the following battery life percentages: 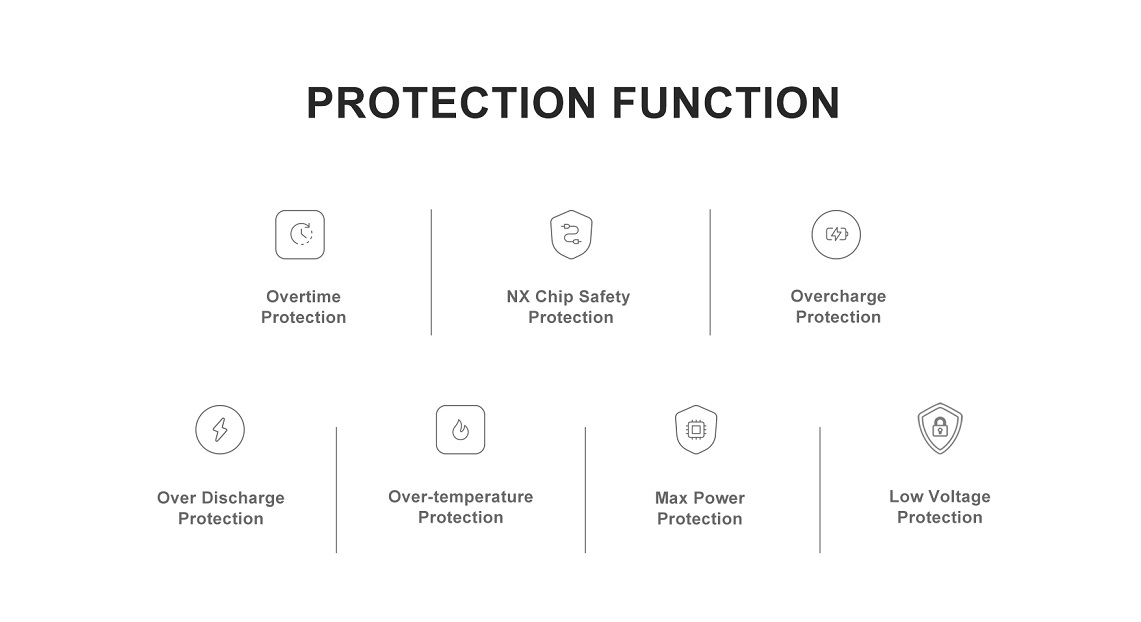 The Feelin has Type C USB and a 1.5A charge rate allowing the 1000mAh battery to charge in less than 1 hour while supporting pass-through!

The Feelin is a cracking little pod device to kick 2021 off with and for someone giving up the stinkies then as long as a reliable supply of coil heads can be sourced then i wouldn’t hesitate to recommend this.

On a couple of similar type devices i have reviewed recently the Auto Draw was sketchy so only used with the fire button but the Auto Draw on the Feelin works flawlessly and gives just as good vape as using the physical button.

There is just so much they have got right about this device with no major cons while plenty to like but as ever there are just a few mainly subjective things that are worth mentioning. I don’t dislike side-fill but as on this device that usually means needing to remove the pod to fill which i always find a con, also the fire button could do with protruding slightly more but that’s being petty as it’s easy enough to find and is nice and clicky! Finally we have no visible venting, i am pretty certain this will be made with the unlikely event of thermal runaway in mind and around the USB port is possibly where the device will vent, it’s more a piece of mind thing and always prefer to see visible venting holes or slots!

I like that not only the device has 3 different power settings but you can tell the difference in power between each setting, also the battery status indications are nicely spaced out making them fit for purpose. The adjustable airflow is quite crude but does what it says on the tin as the saying goes, put the pod in with the protruding side of the pod against the airflow inlets for a tighter draw and with the open side of the pod for a looser draw. With the 0.6ohm coil head the looser draw is a tight RDL while the tighter draw a loose MTL, when using the 1.0ohm coil head the looser draw offers a loose MTL while more of a medium MTL with the tighter draw but you can also use your finger or thumb to part cover the inlets for an even tighter MTL if you wish!

The flavour from both coil heads i found very similar and while it didn’t blow me away i had no complaints and for a little pod device the flavour is more than acceptable, also however you have the airflow the draw is very smooth. What impressed me more was both the longevity of the coil heads as i have lost count of how many refills the pod had over the Christmas and New Years period but also how efficient both coil heads are with e-liquid consumption. Another big pros is battery life, 1000mAh is excellent capacity for such a small device but it just seemed so much better than that even with the 0.6ohm coil head so with the 1.0ohm coil head it just seemed to keep going, when the battery eventually did run down recharging in less than an hour while supporting pass-through is non too shabby!!!

Being able to see the e-liquid level at all times is another pro as is the TPE coating which gives both nice hand feel and makes the mouthpiece feel very nice between the lips. A question most ask regarding pod/AIO/pod mod devices is whether they leak and i can confirm i have had no leaking whatsoever, a few condensation spots but definitely no leaking as any slight moisture as been clear and i have been using a dark high VG juice

The Feelin in my opinion is not just ideal for new vapers but also a good upgrade (yes, upgrade!) option from the original Caliburn or similar device! 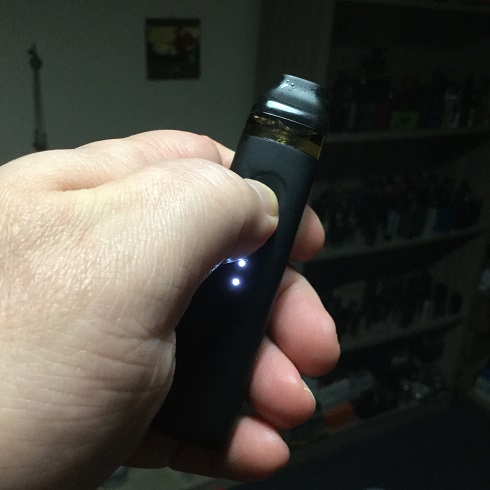 Just how available will the coil heads be?
Need to remove pod to fill
No visible venting
Wish fire button protruded slightly more (being very petty)

I would once again like to thank Ivy from Nevoks for supplying the Feelin Pod Kit, thanks for reading and stay safe!

Tks for your support and sure ,Bro

Nice to meet you here, friend, this is ivy from nevoks, who communicated with you on ECIGSSA

Welcome to the VC @ivyxie.

Nice meeting you here to @ivyxie. There’s some cool guys here on this forum.