First up, I apologise for my terrible grammar. I’m afraid I’m no pugs when it comes to review’s (Boom goes his head).
I’ve no affiliation with Manabush and purchased this juice myself. Manabush has been a favourite of mine since I found them around five years back and as this is the first pure tobacco flavour they’ve done I thought I’d punt a review. 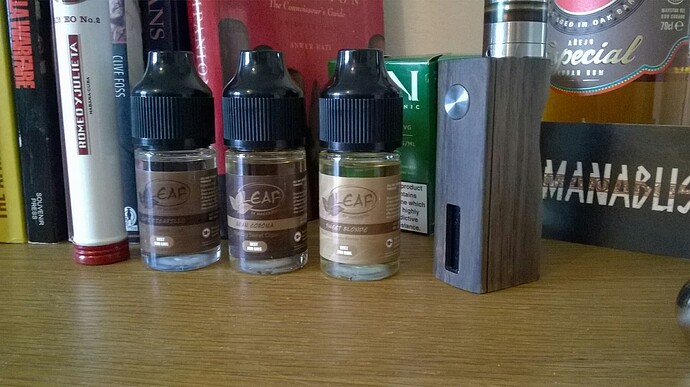 WP_20210910_15_56_14_Pro1920×1078 190 KB
As I’ve said, I’m a bit of a Bush fan, (Make of that statement what you will).
I don’t know what it is, I’ve tried probably thousands of liquids from hundreds of manufacturers over the years, A great many of those tobacco liquids, especially Cigar related but very few have stuck yet I consistently like the liquids Manabush produce. I guess like Joey had a hand twin in friend’s, we’ve all got a tastebuds twin, lol.
I’ve long been asking Martyn if he’s ever considered looking at straight tobacco liquids. Usually the answer has been No.
When the firewater range came out, it was like the perfect Cigar tobacco but I can’t do bourbon. So I asked again… No.

Finally people, we have a Manabush tobacco only line… It’s name is Leaf, it’s reasonably priced… And it is good.

First up.
Sweet blonde tobacco.
This was one of the first I tried back before Christmas and wow is it a belter. It’s like the traditional Nokomis style juice has been transported in those pods seth brundle used in the Fly. It’s been turned inside out so that the support is from a slightly sweet toffee/honey but upfront is a bold balanced tobacco.
Now as I’ve said, I was a Cigar smoker so i can easily taste if a tobacco originates from Indonesia vs a Caribbean/America’s grown tobacco (even if it’s the same seed plant) and am pretty confident I can tell if a Cigar is from Cuba, Dominican, Honduras or Nicaragua ect but cigarette tobacco isn’t easy for me to place.
I got some Virginia, Kentucky and burley notes but I could be completely wrong. What I can say is it’s a delicious blend with a good earthy flavour that starts dry and and ends big and bold. Those sweet banknotes then bloom into an addictive aftertaste.
This is probably the one juice it’s been a while since I’ve last vaped as It was perfect out of the gate so sadly there was no need to send me any more, lol. I will say of all three liquids, this is the one that benefit from leaving for a while after adding nic before vaping.
I would even urge you to buy an extra bottle and lay it down once nic is added for a special Christmas Vape.
Ever the professional (Mrs kid is laughing). I always keep a couple of mls of each liquid I’ve been lucky enough to sample back to clutter up my vape draw and to.see how it changes over time.
After six months of storage, sweet blonde has turned into a golden nectar of the God’s. The flavours have remained stable yet bloomed into and even deeper smoother version of itself.
This is The type of liquid I could see being cellar stored like a vintage cigar and being sold on the secondary market for silly prices, it’s that good. Get ahead and thank me later.
Cafe Cigarillo.
Now we’re back safely into my ballpark.
When I first switched to vaping, The best the vape shop had to offer was a French pipe tobacco or Havana Cigar. Obviously I asked them to hand me that Havana. Sweet Jesus, I nearly puked, french tobacco was worse if anything. I can’t imagine how anyone could begin to believe those juices represented anything near any tobacco, let alone Pinar del rio’s finest.
Over the years things have improved, especially for cigarette smokers. I’ve tried too many Cigar liquids to list and some have had some merit and some like el toro, Red, Drakes and black note have actually used Cuban leaf in a cold press process to offer a taste of what I missed but even these missed the mark. You see the tobacco doesn’t develop those classic flavour characteristics until it’s combusted and there in lies the rub.
Genuinely the first juices that tasted like real cigars where Manabush 's firewater then revolucion range and so that’s where I ended up but sometimes you just don’t feel like hitting the bourbon or rum first thing in the morning so they remained an evening treat for when I’m in The mood.
Enter Leaf Cafe Cigarillo.
Fear not, the Cafe doesn’t hint at a coffee blend, this is a straight up Cigarillo style flavour. The Cafe nods at the little tins of cigarillos you can buy but this is so much more.
Yes first off you definitely get that more reasonably priced Indonesian/Java style Cigar tobacco but then a supportive roll from some mild America’s style tobacco of the type you’d find from Honduras or Brazil.
A mellow mild flavour with complex rounded end. If anyone remembers the Wilde’s cigarillos that used long filler like a full size cigar, we’re definitely in that ballpark. Smooth and fragrant but mild enough for an adv (in fact it recommend it).
Really not sure how he’s done it, I’m just bloody thrilled he has.
Can not recommend enough.
This for me, is the zenith of Cigar e liquid. I can’t even compare it another brand as it’s just fantastic. You actually believe your smoking a large Corona style cigar. The flavour is every bit Cuban (perhaps some of the more modern Dominican cigar too).
Somehow Manabush have captured the taste of the very distinctive flavours found in the tobacco from pinar del rio, the humid hilly northern region of Cuba.
I’d like the flavour to a Punch Punch or H upman Corona which considering how complex the blend of tobacco and process involved in creating those cigars is blows my mind.
If you enjoy or enjoyed a top quality cigar with bold fragrant flavours then this is the juice for you. 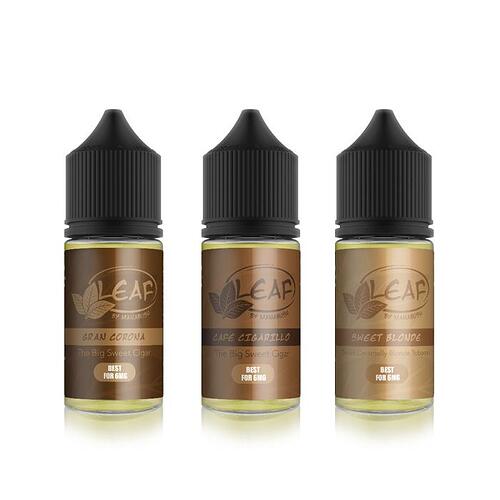 Hope it’s a passable Review all.

Well done, Stewart! I had a look at their site, and the Fire Water range does look appealing! I have only tried one tobacco, an RY4 concentrate, since putting the cigs down, over 4 years ago. My thought process was to steer clear of any flavor that might entice me back to smoking. It sounds like this company really know’s their stuff, and perhaps I’ll try a couple of bottles as I’m pretty confident that cigarettes are forever a thing of the past! I don’t think I’d like a straight up tobacco, but the Fire Water #2,3,4, and 6 look good!

Thanks for making me think outside of the box, and thanks for the review!

Thanks man.
They’re one of those original maverick UK juice maker’s that made such a difference to me at the beginning when juice was generally not so good.
They specialise in dessert tobacco reimagined and I’d thoroughly recommend the tribute range to anyone. It’s like a specialised RY4 on steroids. Nokomis nanabhozo has been my adv since around 2016.
They’ve some flavours that don’t suit me but I’ve never had a bad juice from them and service has been exactly what you’d want from your juice company so I thought I’d highlight them.
The above is genuinely no understatement really genius stuff.

You did a great review Stewart @BlackRider and it made sense, all you said is too true.
I extract my own and vaping now a Cohiba Siglo II and a Montecristo N.4 (and you know WHAT I’m talking about) but you know what, even if extracted (I use a 1:5 ratio on PG rather then a 1:1 and use a high shear extractor ) those gems are awesome but still are not the same as the “real thing”, that’s why I usually add FA Black fire and/or DNB by Inawera to get that feeling.
So Kudos to Manabush for been able to make it become a real thing, it really isn’t easy, believe me, well done!!

I hear you. My evening treat was a cohiba lancero or romeo Churchill. I’d throw in a couple of Rafael Gonzalez or the surprisingly reasonable machine packed jose piedra (very montecristo) or punch and upman during the day, often either finishing with a nice Bolivar or a Nicaraguan robusto.
I love a net liquid. We’re fortunate to have the excellent el toro as well as Red, drakes ect to choose from but to catch the true mouth flavour is something special and I’ve had a few liquids close but as we’d say “No Cigar”.
I was never a fan of the Dutch colony tobacco but cigarillo adds a touch of the Americas and it makes all the difference. Corona is still blowing my mind. It’s been fun matching tanks to replicate the feel and draw.
If anyone wants to try some, I should add that manabush ship literally everywhere. The man likes a challenge, lol.