Hello VC! Today I am doing a comparison review of the GeekVape Loop and Loop 1.5! There’s no denying that GeekVape have been a huge player in the industry. They have released a whole slew of interesting attys and devices and seem to cater to just about every type of vaper. The Loop line of RDAs looks to bring something interesting to the 24mm rebuildable market without being contrived. How well does GeekVape fare in this segment? Read below for my evaluation.

I have had the Loop since April and the Loop 1.5 for over a month and feel I can give a fair assessment of their quality.

The Loop was purchased by myself from efun.top for $16.99 and the Loop 1.5 was sent to me by GeekVape for the purpose of a review. 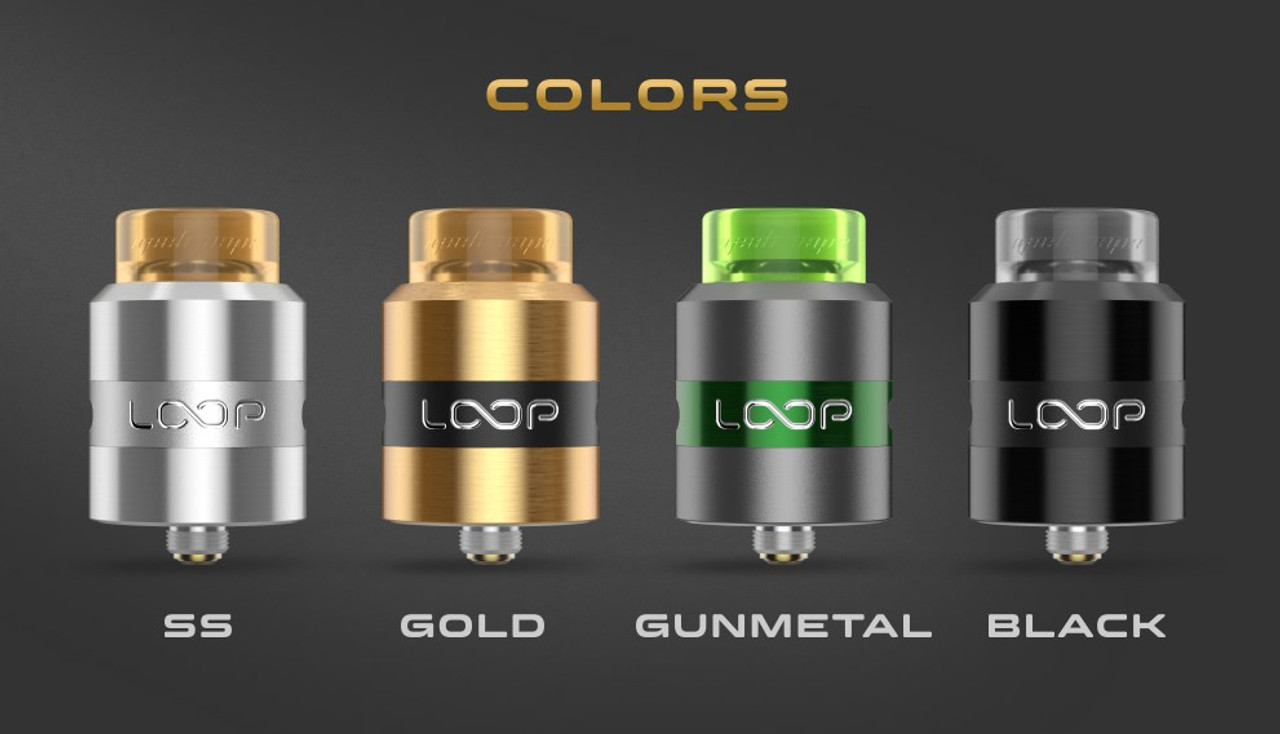 Loop/Loop 1.5
The Loop and Loop 1.5 are 24mm RDAs that utilize a W-shaped, postless build deck and side-to-bottom airflow. Both of these RDAs are very much similar in design, so the question must be asked: why release a 1.5 and does it really improve over the original? While the aesthetics are a bit updated and the airflow is modified, the Loop and Loop 1.5 are very much the same RDA. I guess it’s why they decided to go with naming it the 1.5 and not the 2. Regardless of how similar they are, there are a few differences that set them apart, though both perform very well. Let’s take a comparitive look at both of these attys.

Drip Tip/Barrel
Loop
The Loop comes with a translucent, acrylic 810 Goon style drip tip that mostly matches the RDA. The black one has a smoked one, gunmetal has green, and gold and SS have a ultem looking one. I wish the green one was darker to match the green airflow control ring, but it looks okay. I also wish they would’ve used one of their more decorative resin tip, but believe the Loop came out before they went that route. The inner diameter of the drip tip remains mostly consistent throughout, except for a bit towards the bottom. The outside of the drip tip has GeekVape pressed into it. It’s not terribly noticeable, but it could have done without it. It also comes with a 510 adaptor and 510 delrin drip tip, which is nice if you’re looking for a more restricted pull.

The barrel is a single pice with an airflow control ring that spins freely around the barrel. The Loop logo is etched into the ring. Airflow slits on the barrel consists of two oblong slits on either side of the barrel with matching slits on the airflow ring. There is also a third airflow slit on the ring to allow for single coil use. The ring is a bit stiff until some juice gets under there to let it spin more smoothly. On the inside of the barrel is a stepped design that allows the deck to slide in but reduces the barrel a bit towards the top. It also has two grooves in it that slide in to notches on the deck. This helps keep the airflow lined up and makes it so that you can remove your atty without the top cap spinning around the deck. Towards the top of the inside of the barrel is a nice conical shape to help keep vapor flowing smoothly towards the drip tip.

Loop 1.5 Differences
The 1.5 drip tip is still a translucent, acrylic 810 Goon style drip tip, except on the black version, which uses a delrin one. The main difference here is the inner diameter is a bit smaller throughout until you get to the top where it flares out towards the edges. This doesn’t really affect the airflow all that much, though, and the draw feels very similar. The 1.5 ditched the 510 drip tip and comes with an ultem looking 810 that is the exact one that came with the original Loop. It does still come with a 510 adapter.

The barrel is very similar to the OG Loop but has a faint decorative design in it. I actually like how this looks compared to the Loop. It’s not a huge difference, but I think it looks good. Also, the top of the barrel creates more of a pronounced platform for the drip tip to sit. I don’t really have any feelings about this, it’s just, whatever. You still have two airflow slits on either side of the barrel, but they are a bit wider, and rather than being mostly an oval shape, they bulge a bit at the top and bottom. This helps to match the kind of stepped grating that the airflow control ring has on it. This gives the 1.5 an airier pull over the Loop. I like the grating design they went with, and it helps make the airflow a bit smoother on the 1.5.

Deck/Airflow
Loop
The Loop has a unique W shaped build deck which helps separate each coil a bit and focus the airflow better to each individual coil. It is a postless deck with flathead, grub screws that come at the coils from the sides. This is going to twist your flatter coils a bit, so take note of that. The actual deck piece that you build on is raised from the bottom of the deck and is how the side-to-bottom airflow design works, while also being able to maintain a nice juice well. One more thing I want to mention about the deck before I move on to airflow is the track that the deck has in the middle. There is a sort of track the angles downward from the middle of the deck and directs juice to flow downward towards large slits in the bottom that empty into the juice well. To me, this is a well thought out design and one that works really well for dripping.

The airflow on the Loop consists of two angled slits on either side of the deck that travel under the coil and hit it from the side and bottom. The design is quite nice and produces a great result. The design of it allows bottom airflow while still making sure there is a nice sized juice well for squonking without having to worry too much about leaking from over squonking/dripping. GeekVape have come out with some pretty unique airflow designs in the past, especially with the Zeus, and the design on the Loop is just another great design. Other notes about the deck I want to mention: As I said before, there are two grooves cut into the deck so that the top cap seats properly and doesn’t just spin around when trying to remove the RDA from a device. Also, while I really enjoy building on postless decks, they might not be friendly for everyone since you will have to precut your coil leads to place them. It’s not too difficult, but for someone just starting to build, it might not be the easiest thing to do.

Loop 1.5 Differences
The 1.5 maintains the same W shaped build deck as the OG Loop, the same flathead grub screws that come in from the sides and will bend your coils, and has the side-to-bottom airflow. The main difference comes with how they handle the airflow. With the wider slits in the barrel come much wider slits on the deck, although, they did away with the wide airflow slit the hit the bottom and side of the coil. Instead they chose to use holes to smooth out the airflow more, I guess. There are 7 small holes on the outside of each coil, two large holes on the bottom, and 3 more small holes on the inside. This does help to make the 1.5 a bit less noisy, but it also prevents juice from flowing down as freely as it did on the OG Loop. They did away with the “juice track” that the Loop had which really gave the juice a defined path to flow into the juice well when dripping. Juice does not find its way into the well as easily on the 1.5 as it does on the Loop. So while they help with the airflow, it really hurts this being a dripper and for me it works better on a squonker. One last thing to mention is the valleys of the “W” are more rounded off on the 1.5 allowing you to place larger coils lower to the airflow.

Performance
I don’t think I need to separate this piece as both devices perform very similar. The airflow, while maybe a bit smoother on the 1.5, is still really good on the OG Loop, albeit a slight bit noisier. Flavor from both RDAs is really good in my opinion. However, I think the more restricted slits on the deck of the original Loop give it a slight advantage over the 1.5. The Loop works really well as both a dripper and a squonker where I found the 1.5 to work better as a squonker due to juice not seeping as easily down into the well through the airflow holes on the deck. While I used a few different builds on both decks, I found that my go-to 3mm ID, SS, 26x30 claptons from AVS worked the best. I probably wouldn’t go much bigger than that, and was able to still get decent results from a 2.5mm ID clapton.

Final Thoughts
Comparing the two devices, while I find a few aesthetic changes made to the 1.5 to be appealing to me and the airflow to be a bit smoother and quieter, the question must be asked: Was the Loop 1.5 really necessary? In my opinion, no. It’s not that it’s a bad RDA. The RDA performs really well and I have really enjoyed it. But the OG Loop performed just as good and a slight bit better in terms of flavor. Some of the design choices on the airflow are really nice, but they also removed some elements that worked really well for the Loop. I wouldn’t say you will be disappointed with either device, as I think both are really good, but I don’t feel like the 1.5 was an evolutionary step in the Loop. I guess it’s fitting to carry the 1.5 version number rather than a 2. Hopefully, if GeekVape do a Loop 2, we’ll see some real change and innovation over the original.

Thank you…
…for your attention VC. I hope you all have a great rest of your week.

I want to thank GeekVape for supplying the Loop 1.5 allowing me the opportunity to provide the community with this review. If you want to check them out, you can follow them on their Facebook or Instagram pages.

I have been vaping for around 9 years now. I have used various products over the span of that time. I know what I like and I believe at this point I have a good understanding of what works and what doesn’t. For my review, I’m evaluating these products as to how well they work out the box, their ease of use, and whether or not they hold up over the course of use. I don’t have the skill set to produce thorough testings of the electronics and I defer that to those better suited. This review is purely my experience using the items I received.

Thanks for reading! I appreciate it