Do you remember the Michael? 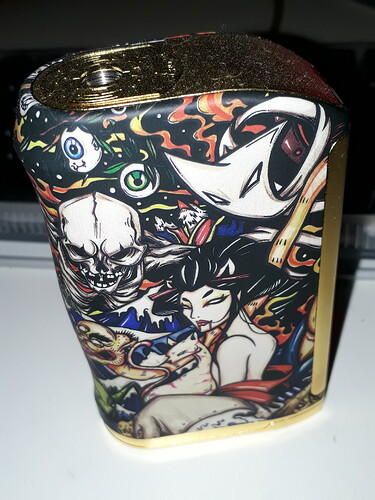 This is not about that, so why bring it up?

The Michael was a collaboration between Asvape and VO Tech, VO Tech produced the chip for the Michael, the VO200 chip.

Today I’m introducing the VO Tech VIA 240, which, as the name implies, is sporting the VO240 chip.

It was send to me by healthcabin for the purpose of this review and will not influence my opinion of this mod.

As you can see it comes in four different varieties and as the name of the review implies, I was send the Transformer.

But lets start at the beginning with the box and content. 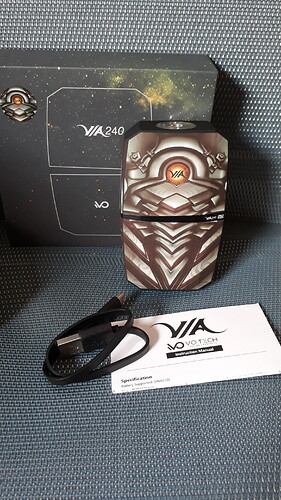 The first thing you notice when you take the mod out is it’s weight, or rather, lack off.
Without batteries it weighs about 120 grams, with batteries around 200 grams.

It feels like I’m not holding anything at all but it doesn’t feel flimsy.
It has the same rubbery feel as the Michael and it’s made of polymer.

Now the Michael had a flaw, it had a bit of a loose bottom.

With that in mind I immediately turned it over to check this bottom and was faced with this. 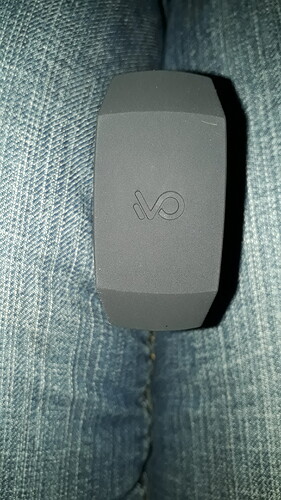 Now that’s a solid bottom but where do the batteries go?

So I turned this thing over and over.

Yeah, my stupidity can be far greater than my cleverness but I finally found it.
You have to pull the bottom half of the mod off to get to the real battery door.
There’s a little clasp that you have to push. 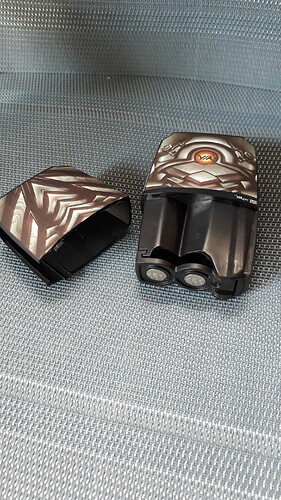 Now I read something about replacement covers but as far as I can tell only the bottom half comes off so I’m not sure about that claim.

Unless, knowing my stupidity has no bounds, I have overlooked something totally obvious. 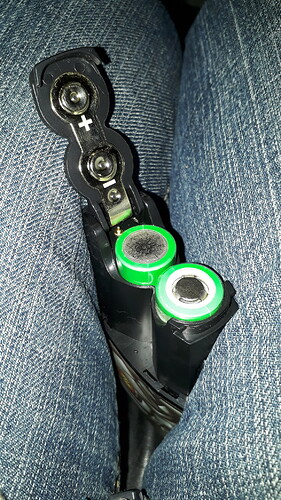 My double wrapped batteries are a little tight but they are protruding so it’s no problem getting ahold of them to pull them out.
As you can see the plus and minus indicators are clearly visible. 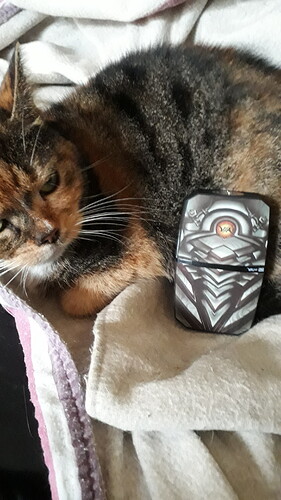 Definitely not a loose bottom and it slides nicely back into place.
I couldn’t find any magnets but it did feel like they were there.

I couldn’t find them cause I was looking at the sides but they are inside on the bottom of the box and on the outside of the battery door.
Smart. 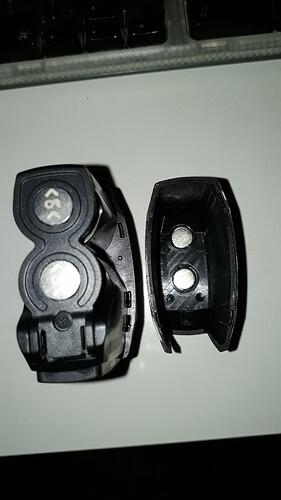 If anybody is wondering whether these magnets are strong enough 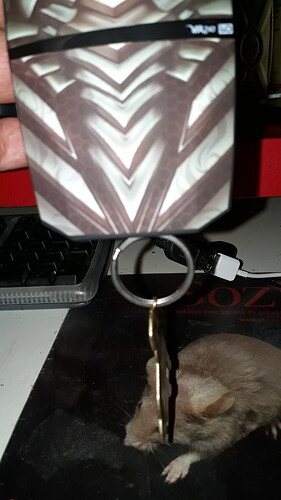 Now that’s just a little key ring but it will hold a zippo, although not for long. 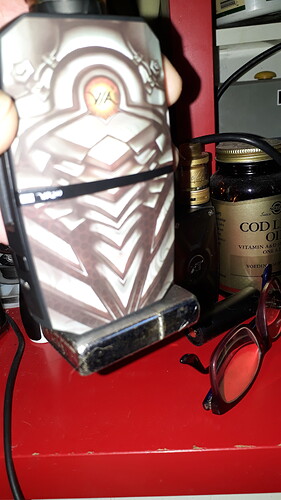 I don’t know if this is a pro or a con. I guess if you’re in need of some small change you can check the bottom of your mod.
Unless money is not magnetic, I wouldn’t know, it never stuck to me.

The buttons are slightly protruding, clicky, not sticky and no rattle. 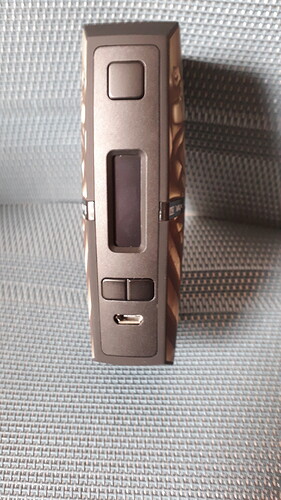 I double-checked that because I had a little problem with a sticky fire button when the Michael was new.

Why keep bringing up this Michael FGS?!
Oh, I had such a crush; it’s hard to get over it.

Back to the VIA 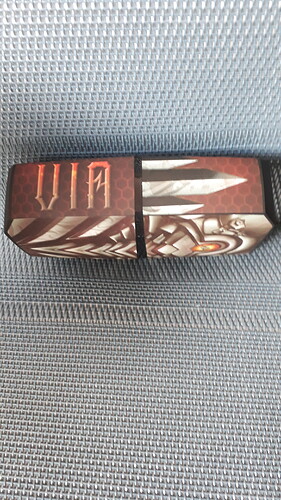 It has a centered, spring-loaded 510 connector, YEAH 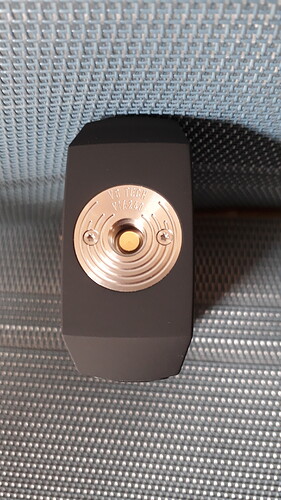 I think it will hold 28mm max without overhang.
Now lets hit you with some specs because it’s…

5 clicks to turn it on or off
3 clicks to get to the different modes
The wattage and temperature are adjusted in increments of 1.

First time I powered it up it was set at Power Mode, in Power Mode pressing the plus and minus buttons simultaneously will enable you to switch between normal, eco and sports mode. This determines the strength of your hit.

The next 3 clicks will get you to Bypass where you can adjust nada.
3 more clicks and you’re back in Power Mode.

How does it work?

I stopped bothering fiddling with TC after running into tedious dry coil warnings with saturated coils, reverting back to PM for no reason and other such nonsense on a lot of devices that claimed to have TC.

The VIA 240 is not one of those; I’ve been using TC without encountering any problems at all.
I know that I know shit about TC but that’s exactly why it is so very important.

A know nothing like me should be able to switch on TC and have at least a decent, or depending on the price of the device, an excellent vape.

Bypass was way too much for me. It just says MAX.W on the screen and all I could handle in that mode were half-second hits.

In Power Mode it is excellent, the hard hitting kind of excellent you want in PM

I’m not too thrilled about the navigation with the plus and minus buttons; I can never do it without also changing the wattage or temperature at the same time.
It’s a minor complaint and easily corrected but I still think it’s a pain in the ass.

That is pretty much the only con I can come up with, unless you want to add the magnetic bottom to the list of cons.

It hasn’t bothered me. I only found out by accident and AFAIK won’t do any harm and can be an amusing activity when bored.

It is so very light, it’s the lightest mod I’ve ever owned.

wasn’t as light as this.

It has a really nice feel to it and it comes with some pretty art on it. If I could have taken my pick I would’ve gone for the Joker myself but I have no complaints.
There’s nothing wrong with the Transformer.

Although this one is cuter

Can I recommend it?

I certainly can, it’s well made, feels extremely comfortable and has looks.

It works really well, has an upgrade of the acclaimed VO200 chip the Michael was boasting…. (Yeah, I will spare you the picture) but is a lot kinder to the wallet.

The screen is clearly visible. 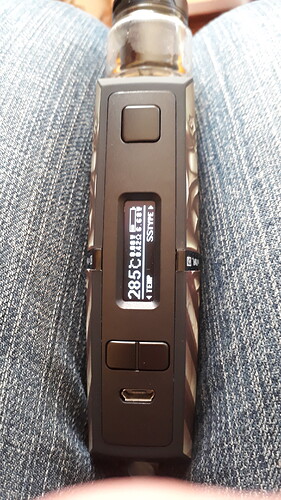 It is so light that even a limp wristed shrimp could hold it.

The buttons are nice and clicky and when I say clicky I mean noisily clicky.
I recently found out that some people like to hear the clicks loud and clear.

Rest assured, that’s what this one delivers.

Usually when I try out a new mod I start in Power Mode, then switch to TC to try that out and after that I will go back to Power Mode.

With the VIA I have stayed in TC because it just works, I haven’t encountered a single hiccup. It has been a very satisfying experience.

I have been using the VIA with the Intake and had put it on the table when someone asked me if it was a flask. 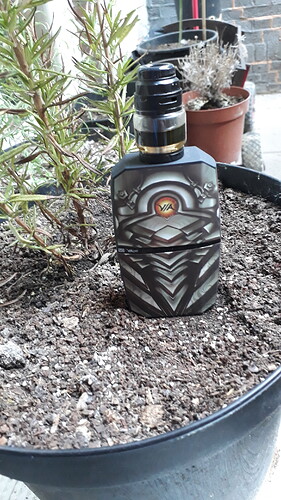 So it could be an excellent stealth vape if it weren’t for the clouds it produces.
So that leaves me with a big, warm thank you to Maggie for sending me this.

Code JOSE15 will get you a 15% discount. If you encounter any problems with that code, just complain loudly in the comments and they will fix it for you.

I want to thank everybody for putting up with my nonsense again and reading this far.

As mentioned on another forum, there should be no review without Rod Stewart!

Thanks for the review Jose!

Absolutely stellar review hon!! Giving the old Pug a run for his money!

I especially liked the part where you mentioned you didn’t go back to power mode! That’s what TC should be, set it and forget it. No monkey fiddling with a football… Just nice consistent delivery. And it sounds like this one’s got the goods!

I’m both happy for you, as well as can’t wait to see how one performs in person (should I be so lucky).

Giving the old Pug a run for his money!

I doubt that very much

Pugs is a pro and he is working his ass off to get ahead. For me it’s just a bit of fun, when it stops being fun it stops.
I will keep it limited to a few vendors and forums, I really don’t want to be drowned in free stuff and end up doing nothing but write reviews.

Sorry about that all you people who think we’ve joined #teamfreeshit to get flooded with free shit.
I’ve never bought so much shit since I started reviewing

Great review, I have a “Michael”

Thanks, do you have a loose bottom too?

I love your reviews. They are just so well done and funny. What does the cod liver oil taste like when you vape it?

Been feeling a little ill lately but…

Yes, Michael has a loose bottom… one knock and it’s gone… 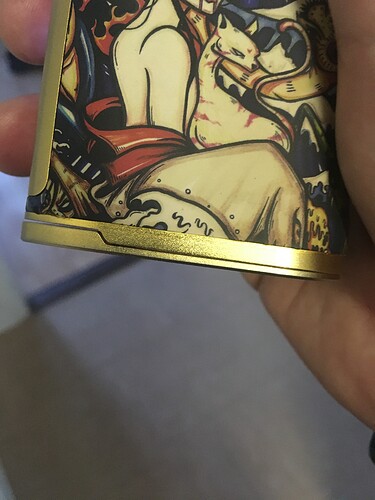 I have to hold mine like this to stop it moving 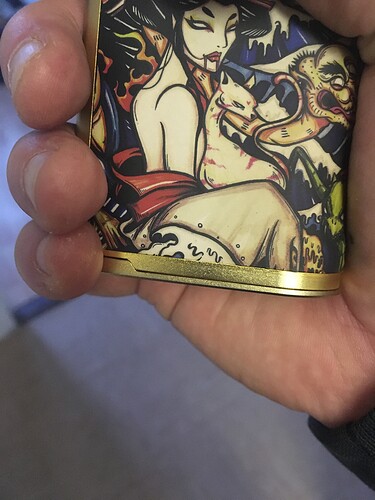 Thanks Jim, I haven’t tried the cod liver oil yet, I’m steeping a spider in it. My very own autumn creation

I have to hold mine like this to stop it moving

Yeah, they really botched that one up. Shame, because otherwise it is a nice mod.

Lovin your reviews! Absolute groove. I feel bad for Michael though. Hate it when that happens.

If Michael can’t control his bottom, that’s not your problem. 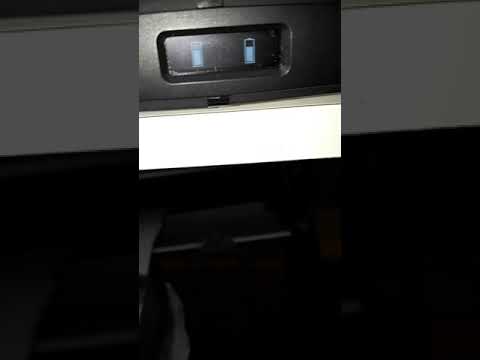 Tried different batteries, didn’t help. Can’t adjust nothing either or get into the menu.
Pressing the fire button will fire it but that’s it.

Fixed it, it was just some juice in the 510 connector

Interesting (though not very intuitive) way to display that there’s a connection problem!

Yay for easy fixes though!

Looks like eyes blinking, unsure of what to think.

It’s winking at you

Oh, ok. I was hoping you were getting fresh with me!