I never used Twitter much. I joined it in 2011, but just recently started looking around. There are a lot of politicians, so-called doctors, and other supporters of vape bans spreading shit tons of propaganda there. So I decided to start fighting back. It is a lot of fun, and there are a lot of vapers doing the same. So please come check it out. Just search for vaping and you will see. And please follow me - @WickedFog, and lets get our voices heard!

You can share a link back here in your bio too 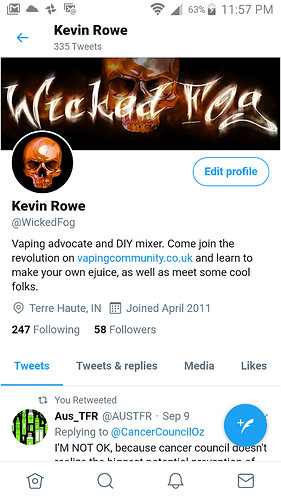 You can share a link back here in your bio too

I have a Twitter account. I use it mostly to say the things to politicians I would love to say in person. Some of it might be considered “reasonable cause” to put me on the national No Fly List

Nothing quite as noble as vaping advocacy.

Literally have barely touched my Twitter account since joining it, I keep saying i’ll go back to it but I just cba

Same here. But after seeing that it appears to be the place where all this propaganda is being used to influence the masses, I just couldn’t help myself. It made me understand why people I have talked to that are anti-vape are so adamantly against vaping. Because if I knew nothing about it, and grazed on fresh grass every day, I would feel the way they do.

I am not into all the social media crap. I despise FB, but I get on there to support my friends if need be. Fuck Instagram. And it used to be fuck Twitter. But I see what a tool Twitter is for those crooked bastards, and sorry, but I can’t just not get a bit involved. And there are a LOT of vapers actively posting there every day. I went from 46 followers to 196 in two days, and it is growing steadily.

I am not asking everyone to go advocating with me. But I challenge anyone to really read some of this shit and not come away a bit enlightened as to what is going on as far as how the shit is getting spread. I’m just trying to put out the fires

Yeah Twitter is used way more by ‘celebs’…which is probably why I don’t use it, I have…what I can only consider a fairly ‘unique’ way of viewing celebs, they’re there to entertain me, thats their fucking job…literally, and if they ain’t doin that, I have little interest, I know that sounds conceited, but in my line of work I’ve met a lot of em, and I could count on one hand the ones that are actually decent human beings, and worth listening to, I like down to earth people who are ‘easy’ to get along with, see you as an equal, and don’t 'expect any kind of special treatment, if they’re good I’ll tell them that they’re good till the fucking cows come home, but the minute they get full of self importance…im done.
I see a lot of that on Twitter, so it’s kinda put me off

I felt exactly the same, and yeah, that is there. But this is a bit different. Steve from the FDA posts propaganda there. Mitt Romney does too. And many others. And the vape crowd is tearing into this with brute force. I am also having a bit of fun with it because I love kicking stupid sheep lol. But yeah, as @SthrnMixer mentioned, I have had to watch what I say. But it’s fun calling @SteveFDA a stupid fuck in a round-about way

And that’s the thing right there, innit?

So many people think just because a famous person says it, then it must be true. Like Julia Robert speaking with authority on environmental issues, as if she’s some learned professional when in reality she just played Erin Brockovich. Or Steven Seagal speaking as an expert on oil and the Inuit after the movie On Deadly Ground.

Yeah, those are old films. But personally it was right around that time I stopped listening to any of them when they try to force enlightenment down my throat.

Well, if you only follow vapers, you only see vaping related tweets. That’s the trick to using Twitter. Not a professional twitterer. I didn’t know that until I started following more vapers and I watched my feed change to only vaping related topics.

That’s the trick to using Twitter. Not a professional twitterer

Oh don’t fucking go back on it now you back peddling motherfucker, I’m half way finishing a tweet to Samual L Jackson about the overuse of the word ‘motherfucker’ and making it into a …in my opinion…unwanted black cliche…

And I’m blaming you entirely!!..

Oh my fucking god you are an ass. I just spat my cheerios on my phone, and I am not the least bit joking. Sending you the bill. Expect a call from my attorney.

I deleted that…I’m not that drunk yet…

Lol. Well, just so you know, all Galaxy phones are waterproof

But are they milk proof

I have literally no reason to want to know that.

I am going to go and test it right away…

OMG it’s like you’re some kind of weird hypnotist …

Oh hell. That gives me an idea!!! Here is my next tweet…

According to recent studies, vaping has a 97.3% chance of doubling your penis size, and clearing any facial imperfections, not limited to:

I was so there…

I posted this too 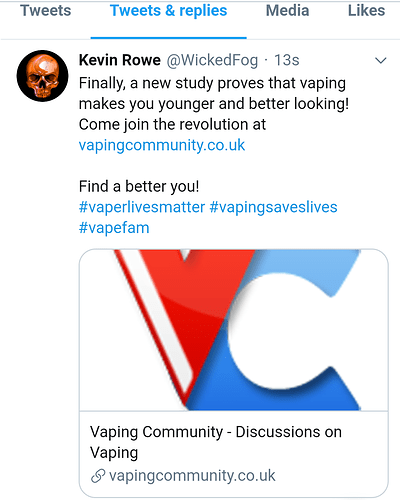