Hi Vaping community, In this review I take a look at the B’adapt Pro SBS 100W Mod from Hippovape. The Hippovape B’adapt was supplied for the purpose of this review by Sourcemore.

Hippovape started off not on the best footing with many including me as releasing atomisers with faces that made them look like Minions is not the best move when there was a big debate around vaping brands trying to attract children! However more recently the “matured” Hippovape have released some interesting devices including the Papua and Kudos Squonk Mod which looks like a BF version of the highly rated Augvape Foxy One! Here, I take a look at their latest device which see’s Hippovape enter the SBS market with this collaboration with VSS Project!

The B’adapt Pro gets it’s name from being able to attach one of 2 different beauty accessories to slightly alter it’s appearance. The device is a SBS which will accommodate either a 21700, 20700 or 18650 battery, however a 18650 adaptor isn’t included! The B’adapt boasts Wattage, Voltage, Temperature and Bypass modes along with multiple safety protections, let’s take a closer look! 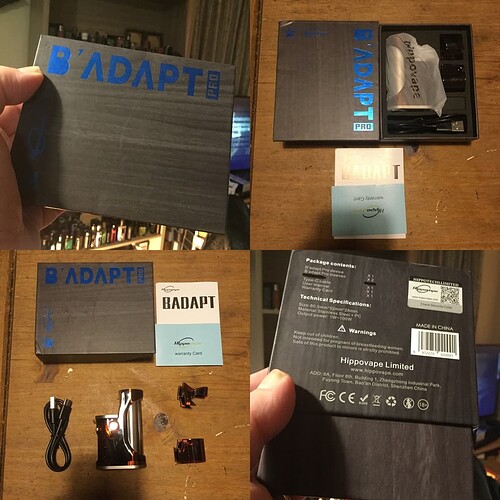 The B’adapt comes nicely presented in sturdy cardboard packaging and on first handling I was surprised by how solid it felt, very thick plastic making it’s weight more in line with a metal device rather than plastic which the main body is! With these plastic see-through devices I tend to find the Clear, Black and Amber look really good while colours like Red and Blue can look cheap but the B’adapt comes in 4 options that in my opinion all look good. We have a Tawny clear which is like a see through Black, Amber clear, Dark Wood (A dark wood effect for those that prefer a solid look) and finally the one I received the Reddish Brown which I chose because for me it’s the pick!

It has a typical SBS design with rear exposed Stainless Steel battery tube and lower front 510 Stainless Steel plate. below the plate section on the face of the device we have the horizontally positioned navigational rocker which can also be pressed centrally for locking and unlocking the device, below the rocker is the 0.96" screen! We have a nicely machined circular side fire button then moving to the base etched branding, safety stamps and the Type C USB port!

It has a really nice ergonomic form factor but with it’s side fire button that’s not taken advantage of and did feel quite awkward to use until I got use to holding it between my fingers and thumb, not convinced the side is the best place to have the fire button from a comfort point of view! 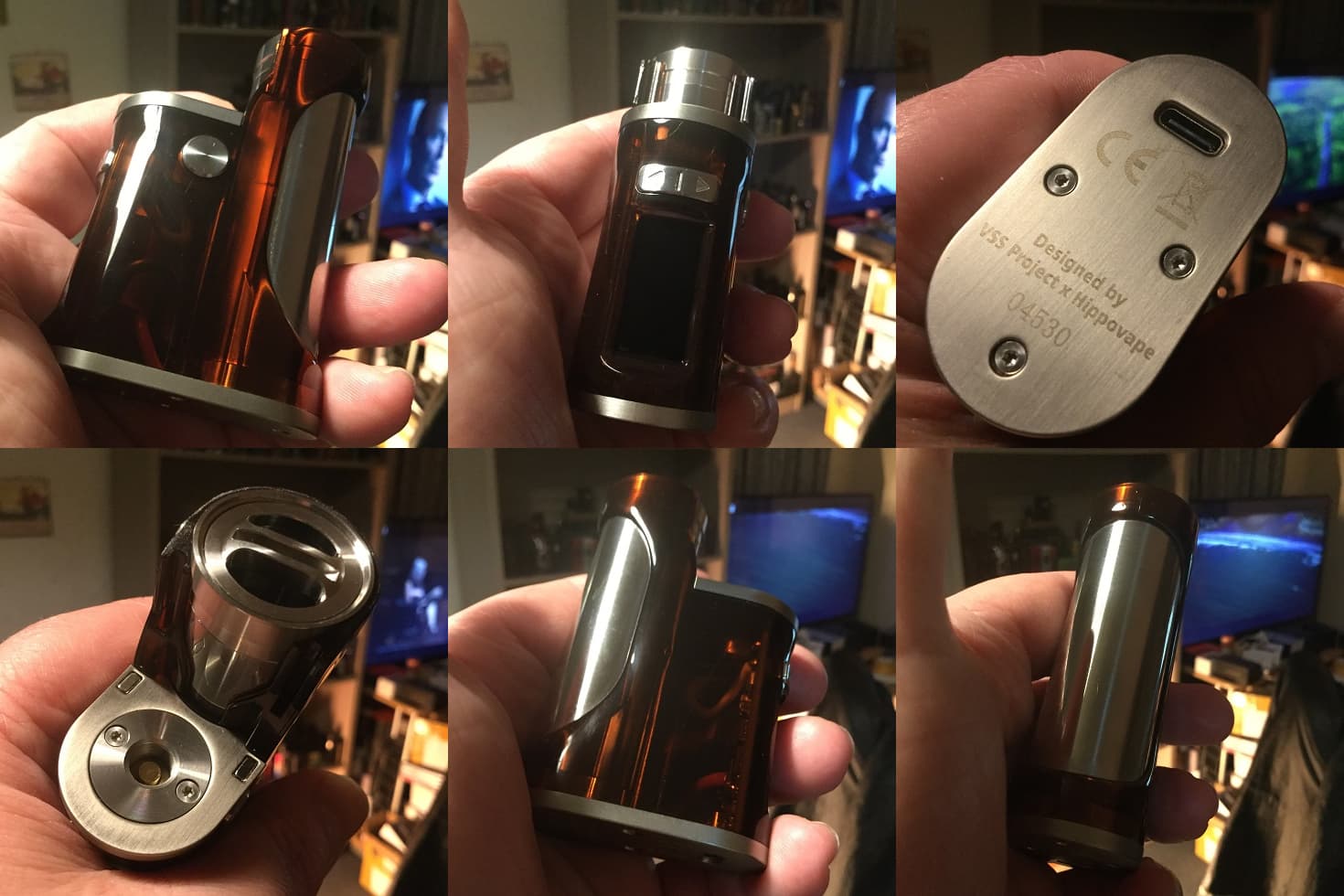 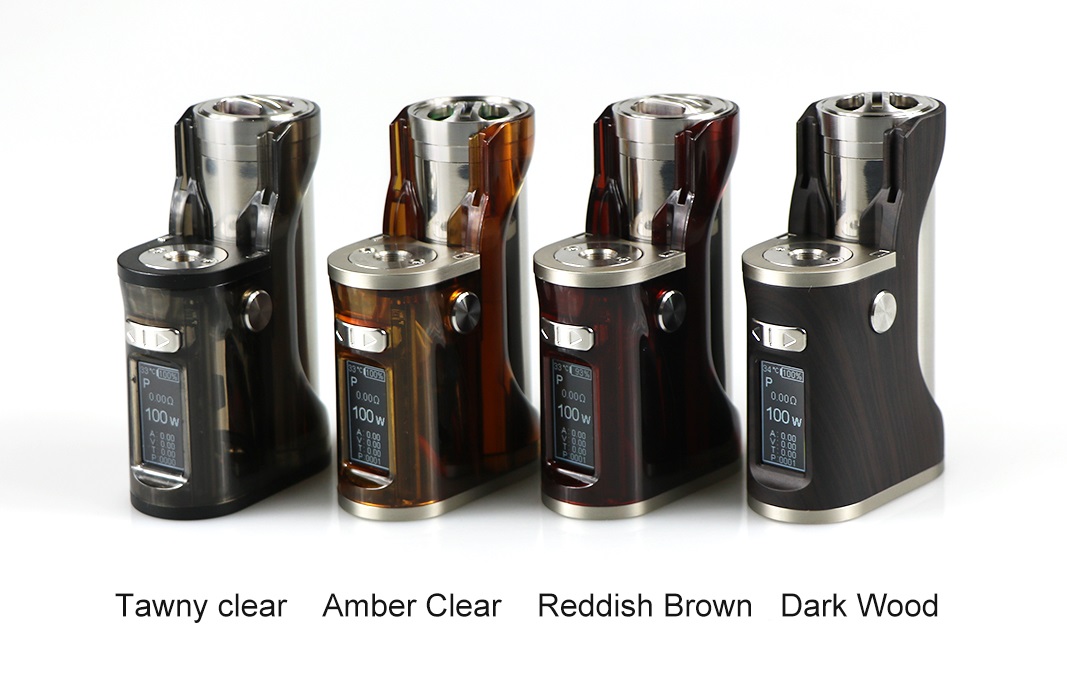 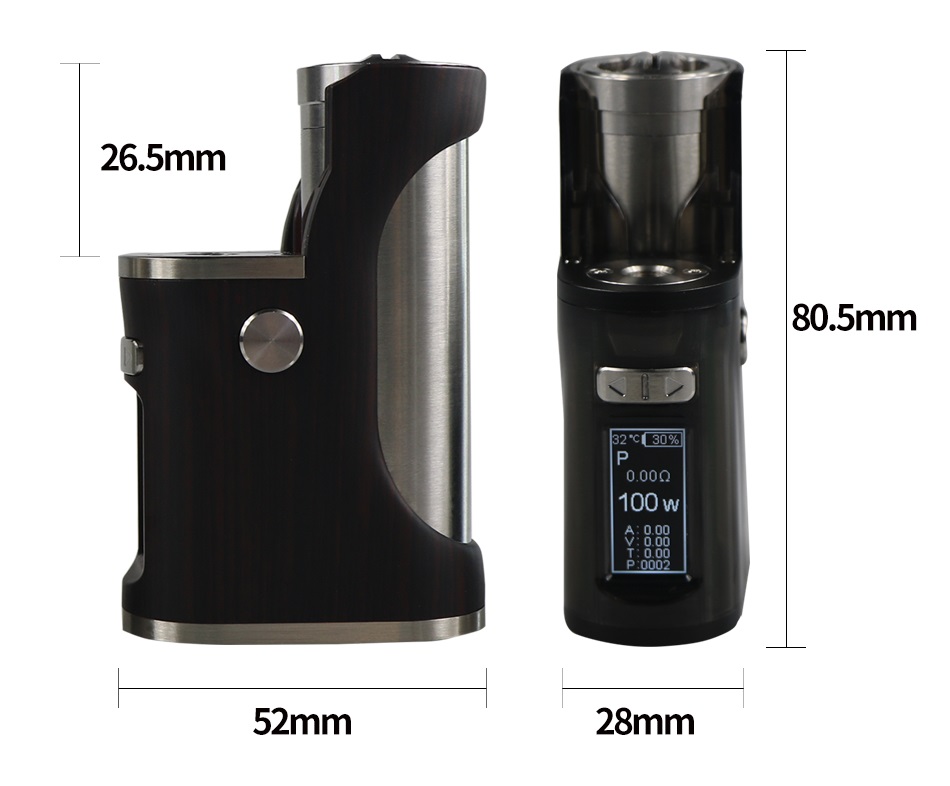 You receive two different beauty accessories, one full sleeve and an upper angled attachment which I do like. Both fit really well via rear channels and bottom magnets with no movement but they do reduce the size of atomiser that can be fitted to 22mm in diameter. Although a 26mm atomiser would fit towards the front and to both sides the position of the battery tube only allows for a 24mm atomiser which for me is a con as many recent SBS devices have allowed for at least a 25mm! 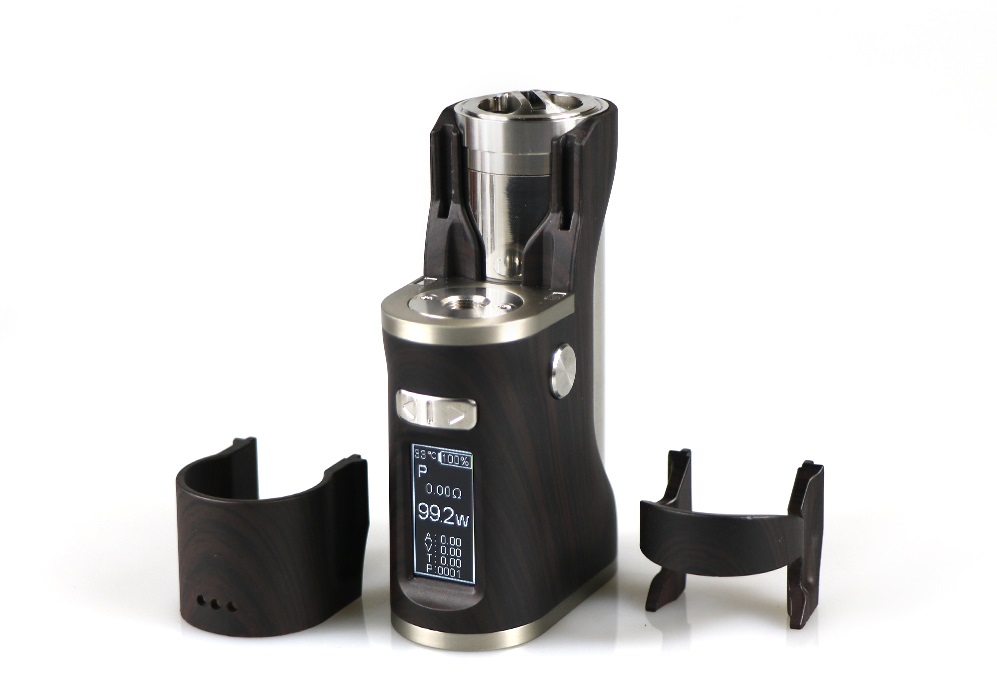 As mentioned I do like the upper angled attachment and also like the look with no attachment installed but the full sleeve attachment really isn’t much use! It completely blocks off the airflow and while it does have 3 very small airflow holes on the attachment you would need to be very lucky for it to line up with the atomiser airflow and even then would reduce any airflow using a cyclops design!

Of course being a side by side device one side is the battery tube, we have a threaded plate that screws down into the threading inside the tube for a tight fit, meaning no battery movement whatsoever. The marked orientation at the bottom of the tube is barely visible and we have no negative marking underneath the battery plate.

It can be a bit fiddly to get the threading to catch when screwing the battery plate in position to secure the battery which can take a few seconds or even longer sometimes (but only a few swear words passed my lips). Once it catches though it gets the job done even if the threading is a little crunchy! 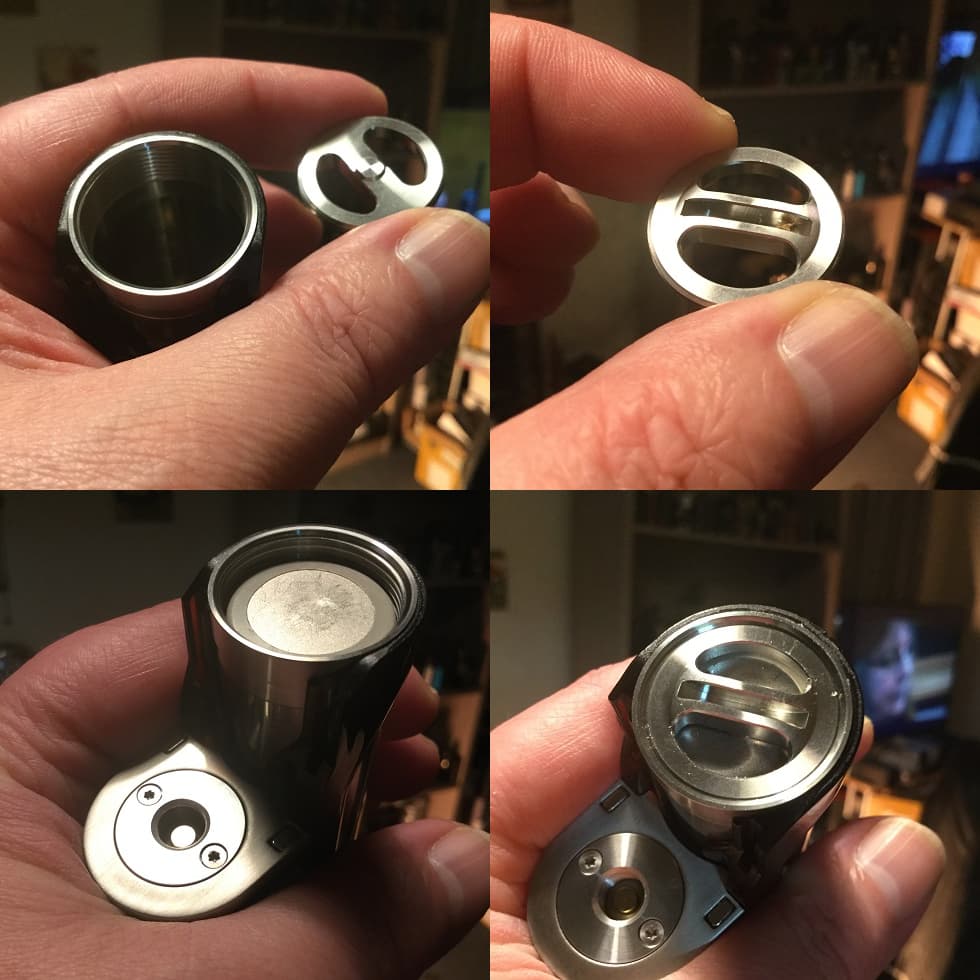 The B’adapt doesn’t have a colour display however it does give plenty of information (in fact more info than most), is well laid out and everything can be easily read! Top left we have the internal temperature and then top right the battery status icon with the status given as a percentage, very good!

The lower half of the screen lined up with a central orientation we first have Amps, followed by Voltage (watts in TC or Bypass), Time of vape and finally the puff count! 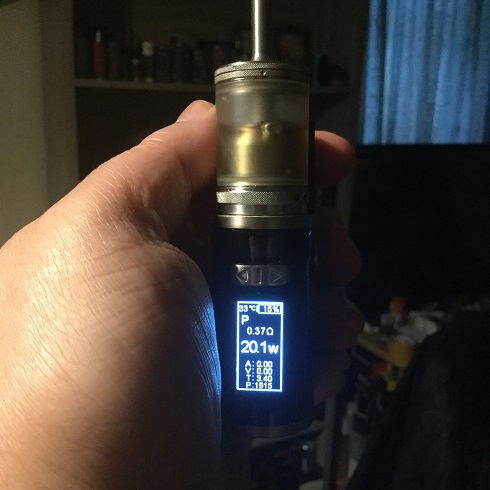 3 clicks of the fire button brings up a list of modes which are Watts, Volts, Temp and Bypass, just scroll so the mode you require is highlighted and then press fire to select. When choosing temp it will then give you the choice of SS, NI, TI or TCR and then allow you to lock in the resistance, when on the TC working screen pressing the fire button twice quickly will cause the wattage to flash which can then be adjusted! 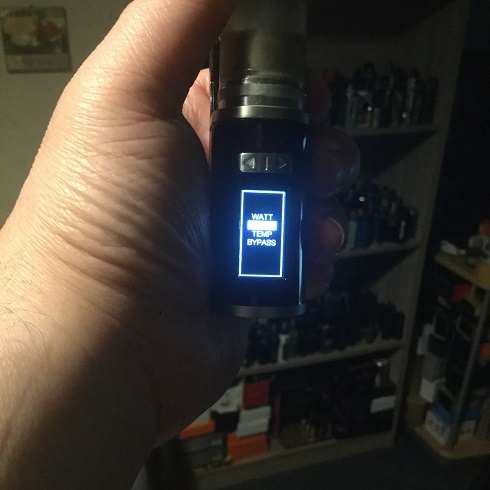 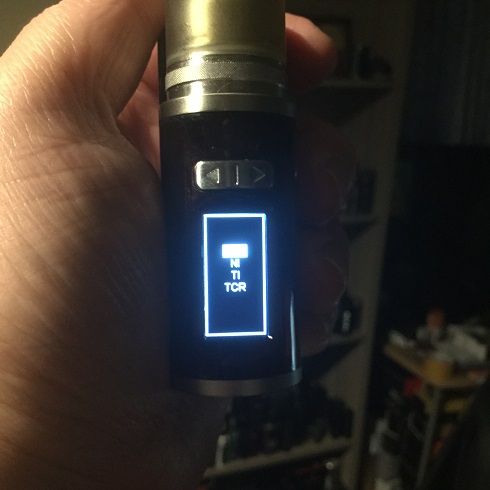 The wattage adjusts from 1w to 100w in 0.1w increments with single presses or 1w increments with the button held down, it doesn’t round robin! The Voltage can be adjusted in 0.01 increments from 0.5v right up to 8v, the final feature is left and the fire button pressed together resets the puff counter! 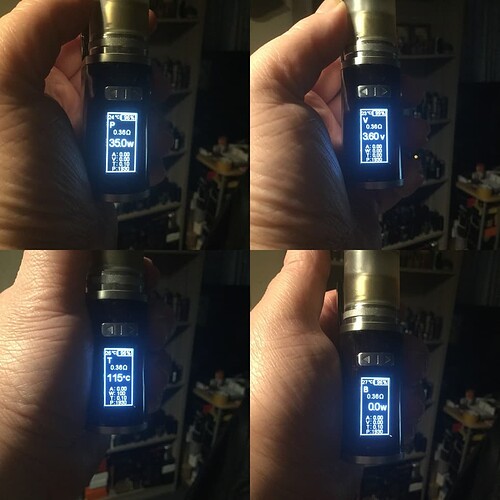 While charging a status bar is displayed and once fully charged the screen turns off! As for the charge rate I have absolutely no idea as I can’t find that information in the manual or on the Hippovape website but my guess for what it’s worth would be either 1.5 or 2A!

The devices performance is impressive, boosts voltage to 8v, fires with no delay and just worked flawlessly however it isn’t perfect by any means. The first issue is like many devices these days it has smart wattage but it can’t be turned off so every time the device is turned off, atomiser removed or batteries swapped out the wattage alters to one the device thinks you should be vaping at which is never the wattage you actually want!

The next is although I quite like the angled attachment and the whole idea of “adapting” the look it reduces the allowed atomiser size to only 22mm and the full sleeve attachment either completely blocks or reduces airflow, also only allowing for a 24mm atomiser when not using one of the attachments is quite limiting in comparison to other recent SBS releases which have allowed for at least a 25mm!

I am also not a great fan of the side fire button which doesn’t allow full advantage to be taken of the ergonomics, however I really like the navigational rocker and the USB port being on the base although this will be a con for those wanting to charge in the device!

I like that either just the rocker, just the fire button or the whole device can be locked and the display and layout is top notch giving as well as the usual information also the PCB temperature and battery charge as a percentage! Despite it’s flaws it’s a really good device which I enjoyed using and although the attachments for adapting it’s look could of been executed better, a good idea! 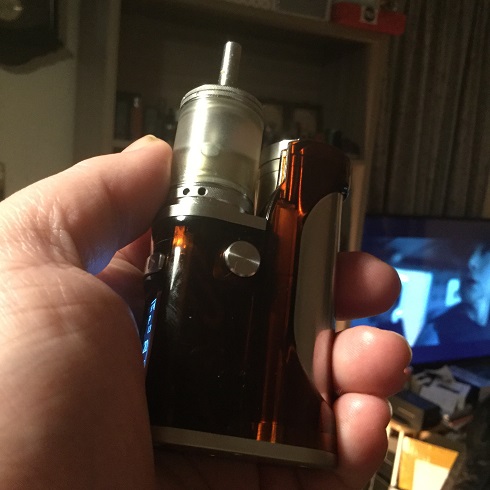 Really nice looking
4 colour options including wood effect
Solid feeling device
Device look can be altered
Attachments fit very securely
Really nice display with loads of information
Multiple locking options
Will accommodate either a 21700, 20700 or 18650 battery
Really like fire button even though I do not like the position
Excellent navigational rocker
USB port being on base gives a slicker look
Device boosts voltage to 8V
Wattage, Voltage, TC and Bypass modes
Device fires without delay and performed faultlessly
Type C USB

I would once again like to thank Sourcemore for supplying the Hippovape B’adapt Pro SBS 100W Mod, thanks for reading and stay safe! 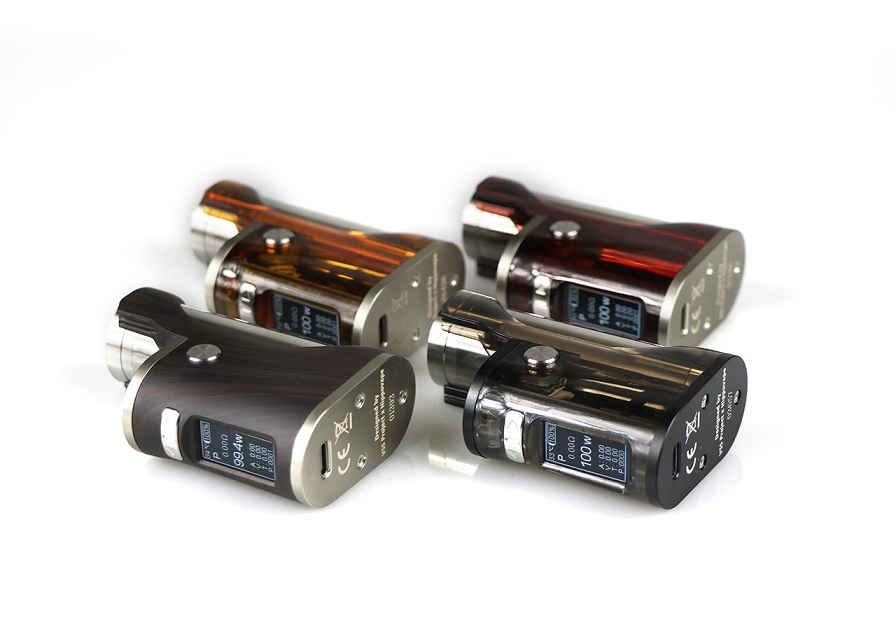 I have to agree @Timwis very nice looking SBS there, and nicely written up, and detailed.

, non the less Great review as always @Timwis. That is a nice looking SBS

The available color’s for any device, weigh quite a bit on my decision to buy, and I really like all of these! The 21700 is the icing on the cake, here. This might just be a good landing pad for my 24mm Steam Crave. Well done, Tim…thank’s

Thanks Brian! It’s a really nice device perfect for a 24mm atty, you just won’t be able to use any of the attachments to “adapt” it’s look that’s all!

Understood…plenty of bling for my eye’s without, though!

I am starting to warm towards the wood effect now, that always happens when all the options are nice I pick which I think is nicest but then change my mind the second it’s on the way!

starting to warm towards the wood effect

Ditto…or, the (what appear’s to be) Mahogany one is second choice.

the (what appear’s to be) Mahogany one

Yeah the Reddish Brown, that’s the one I have!

Just my opinion but you might as well be an affiliate. A little extra money in the pocket ain’t a bad thing and I for one would use your link.

Anyway, thanks for the review.

It’s a decision I made when I started reviewing that I wouldn’t except any financial gain from doing reviews, quite often when dealing with a new manufacturer the first thing they ask is how much I charge and sometimes seem surprised when I say I don’t accept payment but to me it seems a conflict of interest and even if subconsciously potentially might sway my opinion on a product!

Oh that’s nice and a great write up