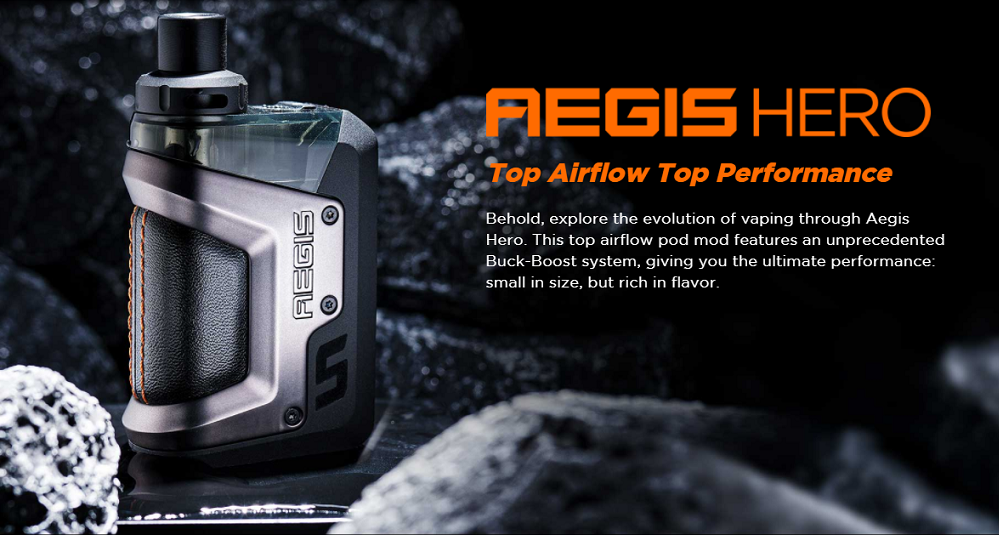 Yes another Aegis and another Pod Mod/AIO device but this one has it’s size going for it if you are into stealth devices as it’s a tiny little fella. That small size though gives us both a small battery and screen as a trade off.

The Aegis Hero maintains the usual IP67 rating while also offering a top to bottom leak resistant adjustable airflow design. The Hero features both Power and Bypass modes with a puff counter that can be reset but is a very simple device which also utilises the same Boost B-Series coil heads as used on the Boost, Boost Plus and Zeus Nano Tank. The device is also extremely light and comes in 6 colour options, let’s give it a look! 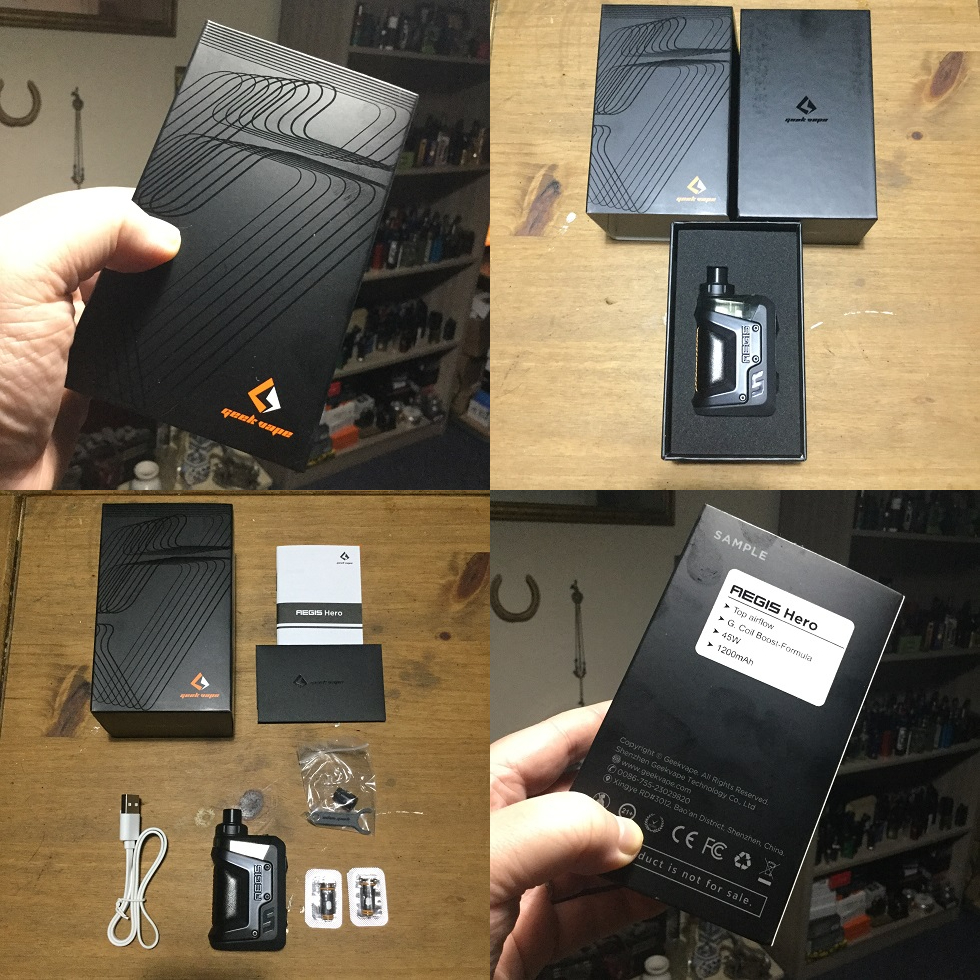 The Aegis Hero arrived in Sample packaging so yours will differ and on opening i was surprised despite seeing the dimensions listed just what a small palm sized device the Hero is. The overall look in a mini Aegis Legend (and i mean mini) and at just 88g not so sure if the IP67 waterproof rating is needed as this could possibly float! The colour option refers to the colour of the bracket which on mine is Black, the options are Red, Silver, Rainbow, Black, Blue or Gunmetal.

On the face we have a slanted fire button top and switch style vertical navigational rocker bottom, in-between we have a very small screen. The front section of the sides and the base of the device has a thick rubber shell and then we have a Zinc Alloy bracket in the colour of choice, finally we have the familiar padded Black leather spine with two vertical rows of stitching. We have 3 visible screws either side to secure the bracket and also “AEGIS” stamped into the metal both sides. One side in the rubber section we have a rubber plug that seals the USB port and the opposite side either a “S” or “5” stamped into the rubber which makes me think maybe at some point during it’s design Hero wasn’t it’s original name but i am guessing!

Up top the pod protrudes and is tinted but is not over dark and we have an adjustable airflow cap with dual slots and 510 fitting drip tip. Moving to the base we have the Geekvape logo within a circular indented section and membrane sealed venting holes. The build quality is what i would expect with an Aegis IP67 device and ergonomically it just gets swallowed up in the hand! 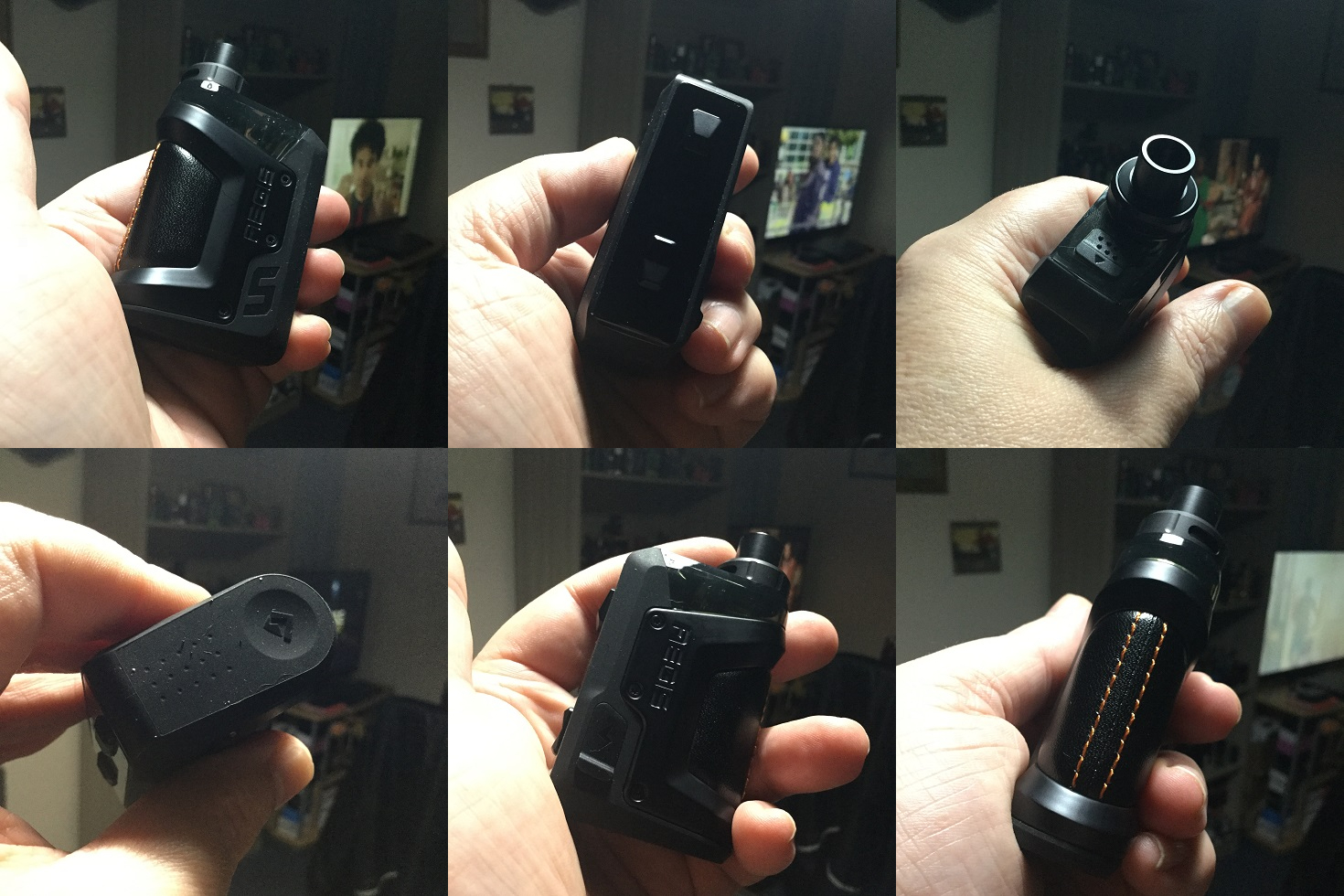 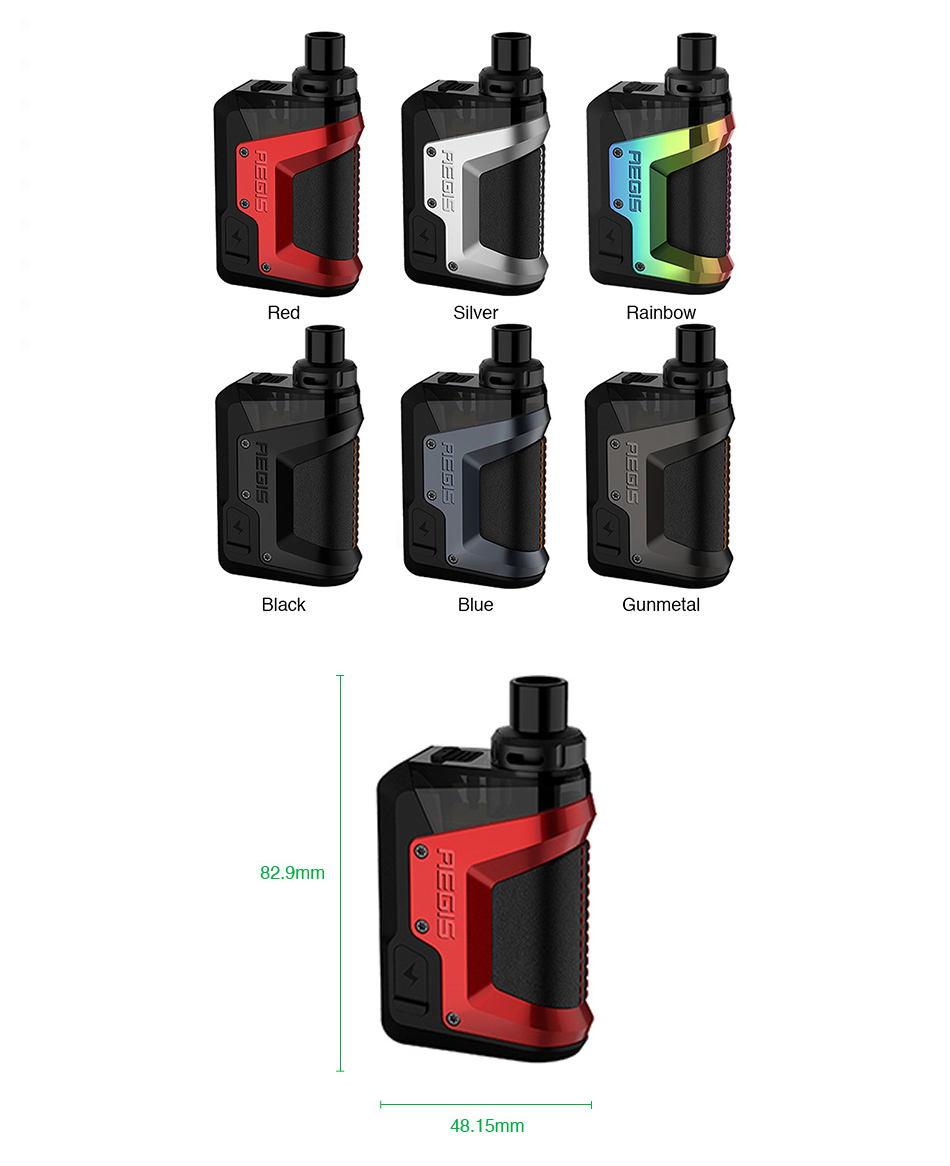 As well as the Aegis Hero device with 4ml (2ml TPD) pod and paperwork you receive both the 0.4ohm and 0.6ohm mesh boost coil heads, a coil removal spanner (which i have never needed), spare drip tip with narrower bore and of course a USB cable! 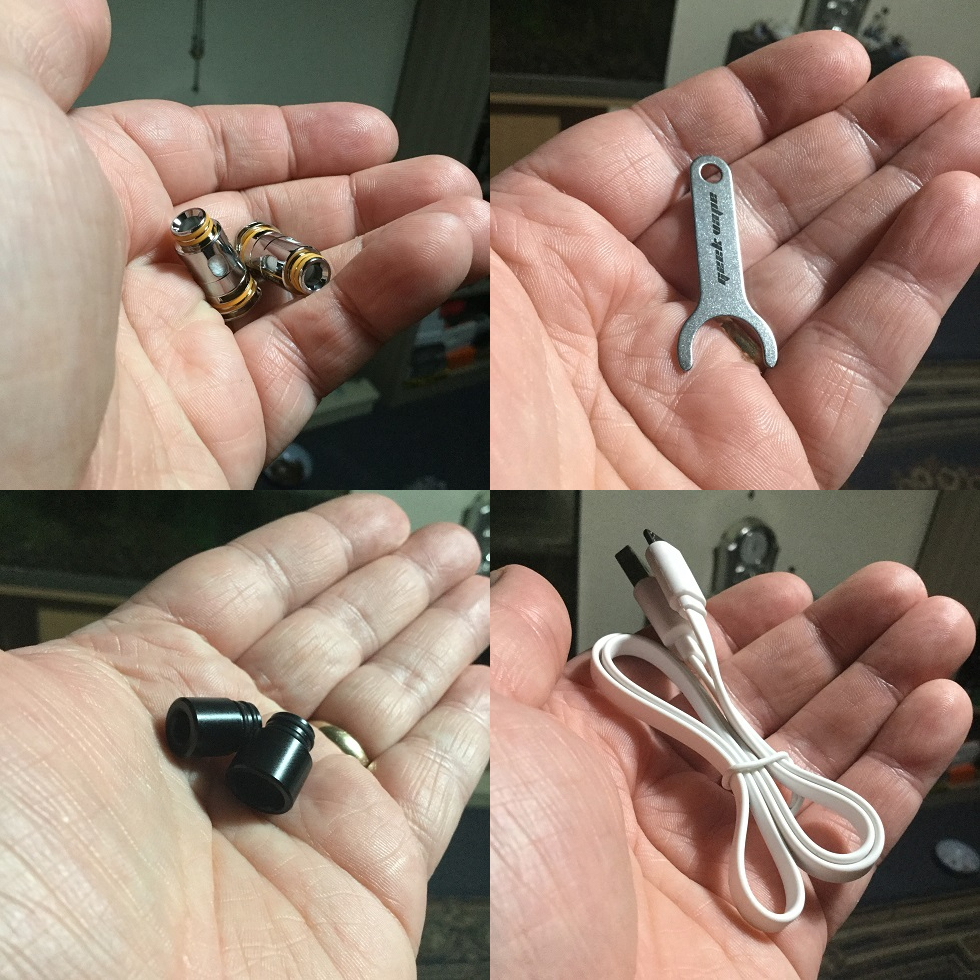 The Aegis Hero is IP67 waterproof which means it can withstand water immersion between 15cm and 1 meter for 30 minutes.

It is also dustproof as classified by the first number of the IP67 rating and shockproof so the device is protected from dust ingress and accidental drops.

The pod is tinted but not too darkly and also protrudes outside the device so seeing the e-liquid level is no problem at all. Up top we have a cap that turns with dual airflow slots but more about that later then on top of the cap a 510 fitting drip tip, one with a narrower bore is also included. Still on the top surface of the pod towards the front we have a rubber piece which lifts easily to reveal it’s a plug for a good sized fill port. The capacity is 4ml on the standard pod and of course 2ml with the TPD version, i found filling quick and mess free! 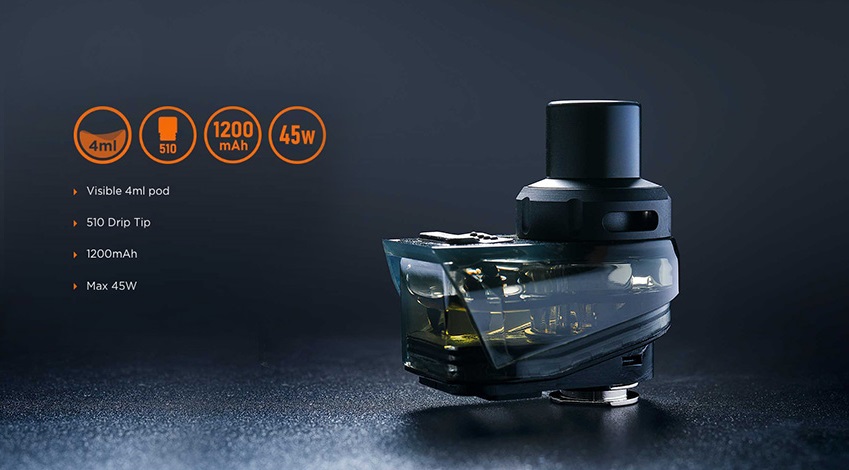 Looking at the base of the pod we have the opening for the coil head to be press fitted into position and two protruding guide rails, we also have a wide rectangular magnet. 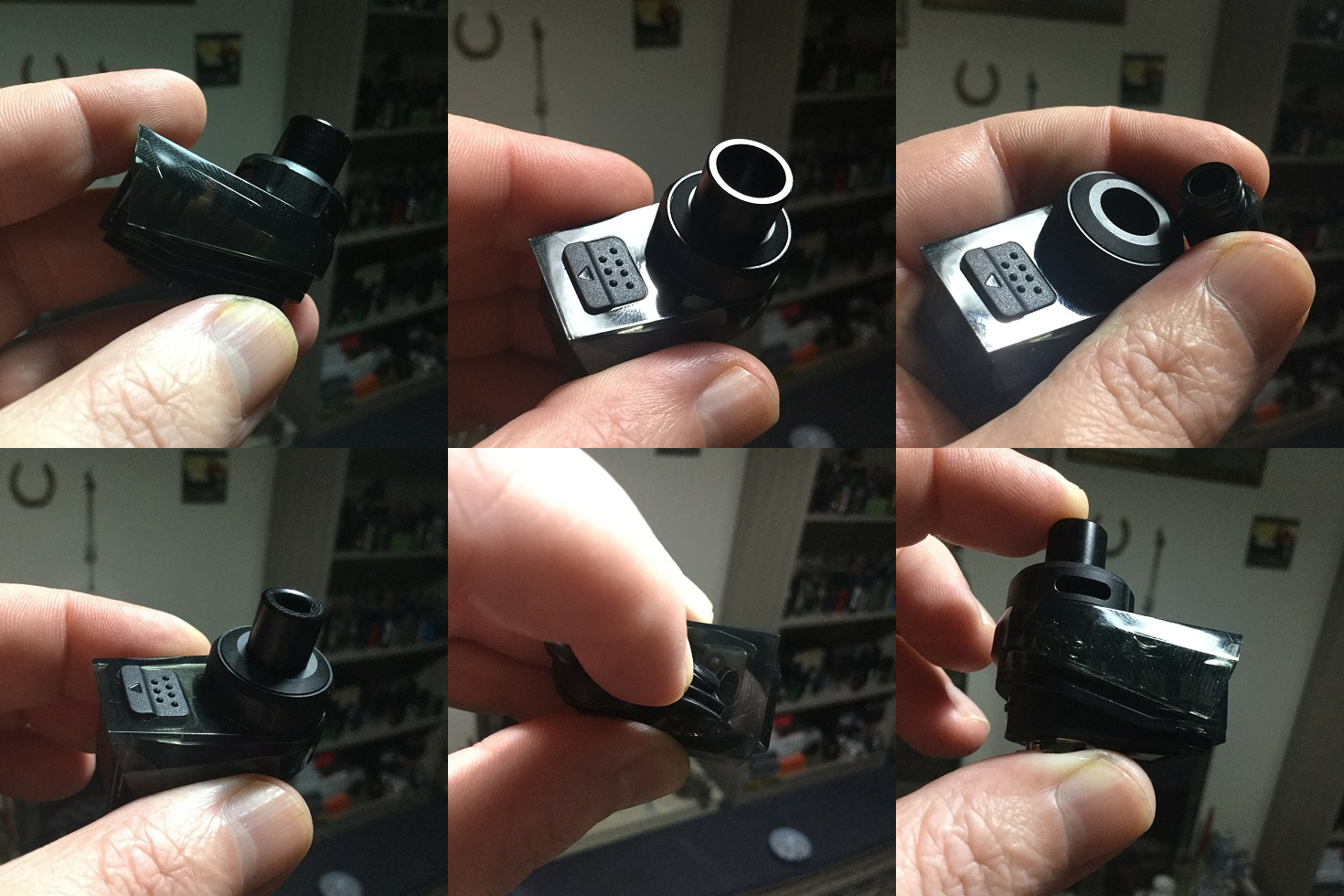 The Aegis Hero takes the same Boost coils that fit the Boost, Boost Plus and Zeus Nano Tank. You receive both the 0.6ohm and 0.4ohm kanthal mesh coils, the 0.4ohm is rated between 25w and 33w and the 0.6ohm rated between 15w and 25w.

Looking in the bay we can see the central Gold plated, spring loaded contacts and the wide rectangular magnet which lines up with the magnet on the pod. You need to put the pod in front first and as well as the very strong magnet it clicks into place and has no movement whatsoever! When removing you can get your nail between the pod and device and then give it a good tug! 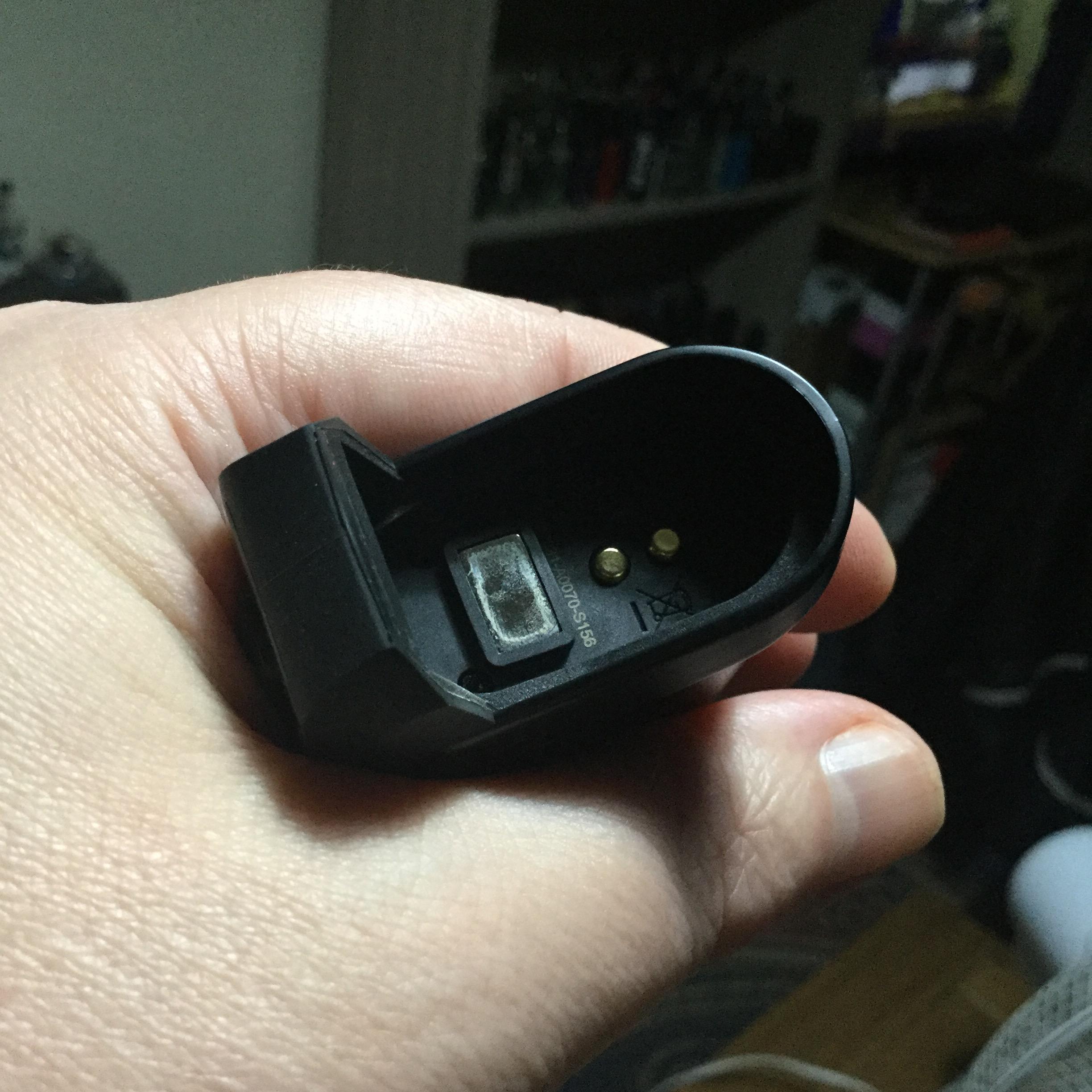 On top of the pod we have like a top-cap with dual slots and turning the cap closes and opens the airflow giving the Hero full adjustable airflow. It’s a top to bottom design and when the coil head is installed it’s airflow inlets are sealed within the pod giving it a leak resistant design. The air comes through the adjustable airflow slots and then travels down tubes which feed the coil head inlets! 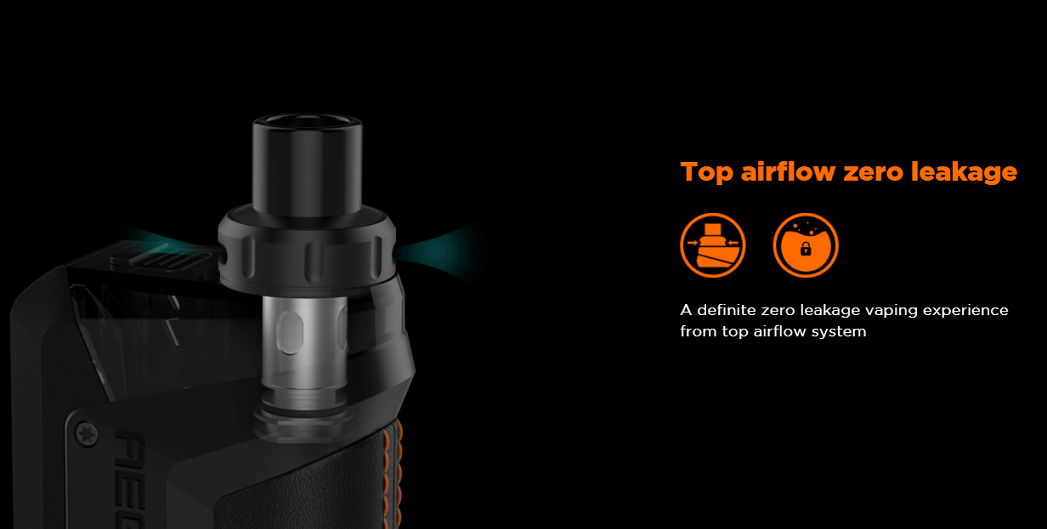 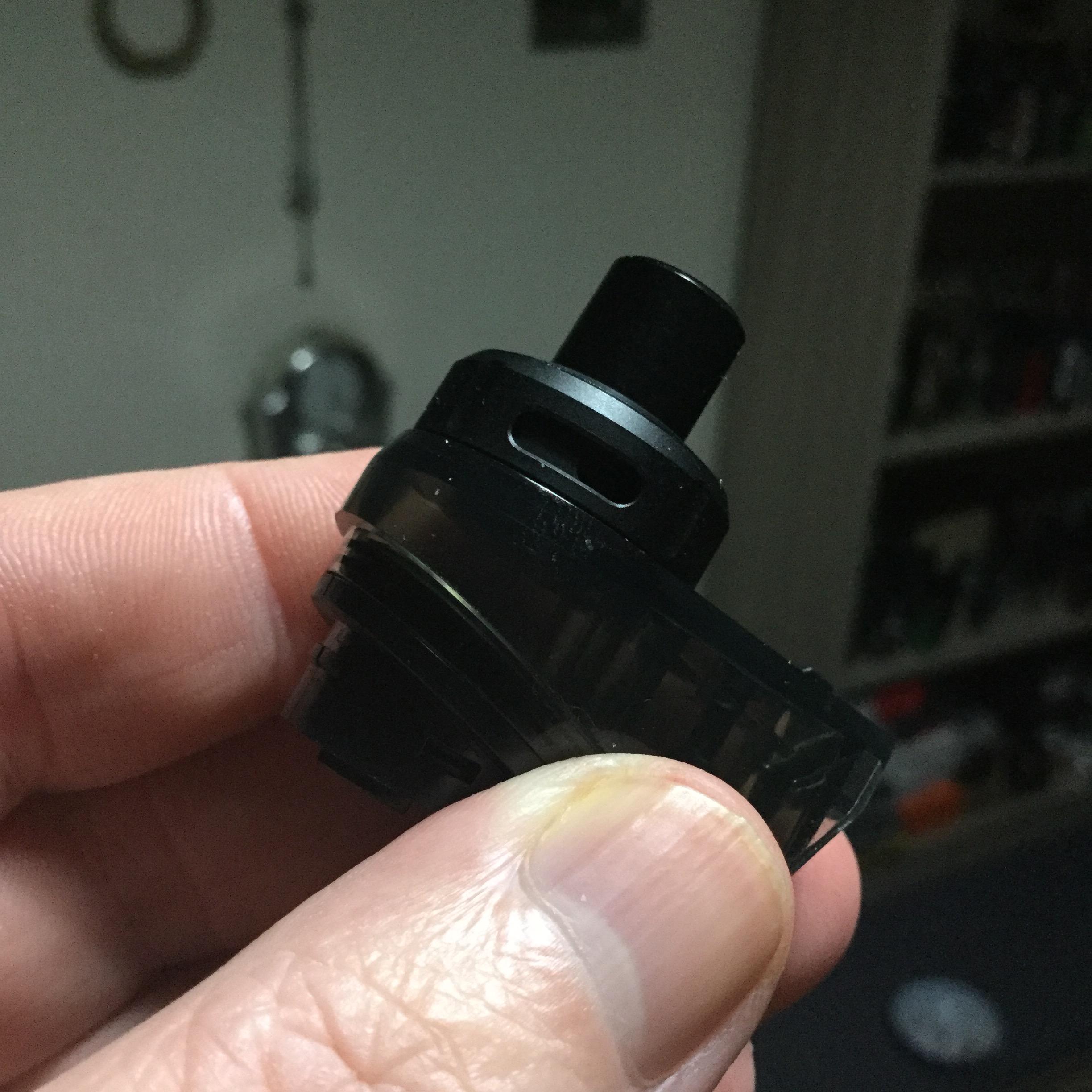 The display is very small and also cluttered with a weird font used on a couple of pieces of information such as puff counter, basically i am not over impressed! The display is bright though and the wattage or voltage (depending on mode) is in a nice sized font so better than no display at all.

Top left we have the resistance and top right a narrow elongated battery status bar. The central area says “PUFF” to the left and then right your puff counter “0000”. Bottom left we have the whole number wattage or voltage when in bypass mode and then in the bottom right area of the display we have either “P” for power or “B” for bypass then underneath the part unit and “W” for watts or “V” for volts. 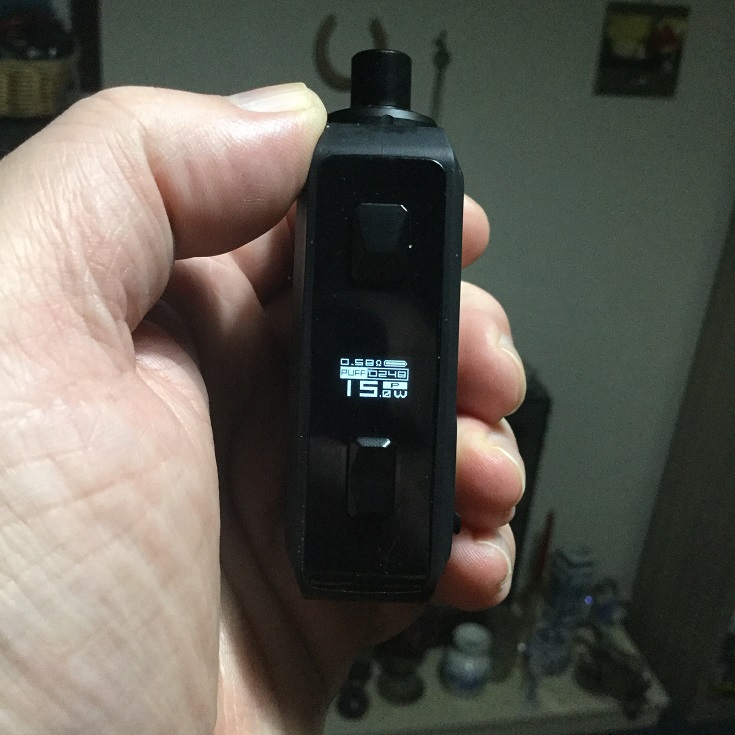 The Hero is a simple 45w max device that offers both variable wattage and bypass modes. The device is the usual 5 clicks of the fire button to turn on and off and once on up and down together locks and unlocks the navigational rocker but when locked the device will still fire. 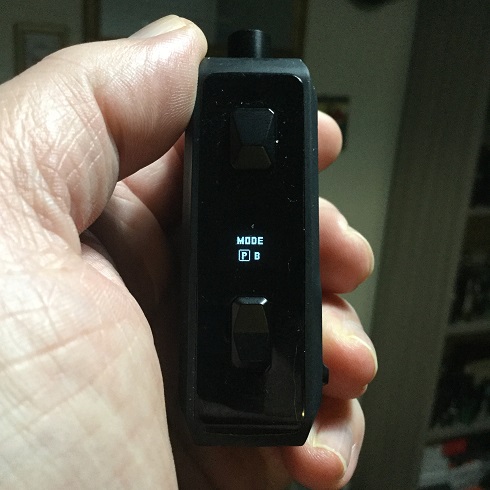 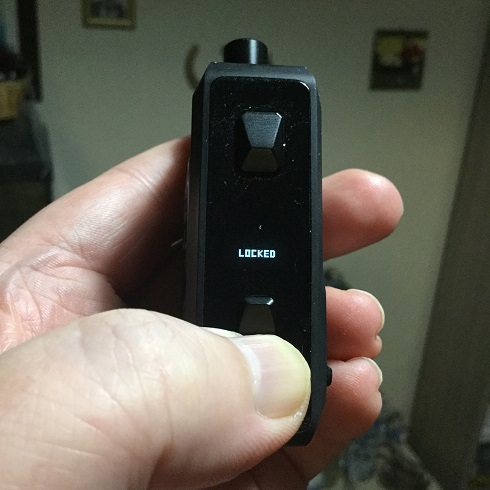 The puff counter can be cleared by pressing down and fire together and pressing the fire button 3 times allows you to switch between power (variable wattage) and bypass modes. Any safety alerts are displayed on the screen and while vaping under normal conditions “VAPING” is displayed. The wattage can be adjusted using the navigational rocker in 0.5w increments from 5w to 45w and it round robins! 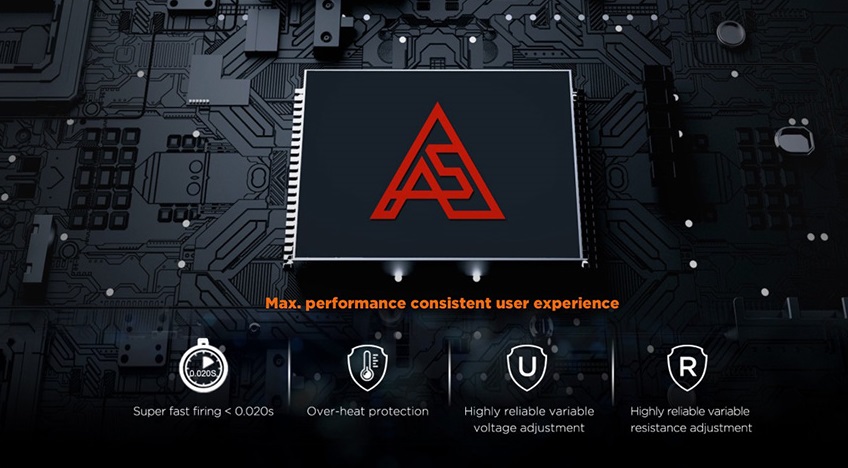 The Hero uses Geekvape’s Buck Boost system to give stable performance throughout the battery life!

The Hero has a micro USB port (not type C unfortunately) which is sealed by a rubber plug which needs pulling free, the plug stays attached to the device when the port is revealed and after charging make sure the plug is put back in position correctly so the watertight seal isn’t compromised.

I can’t find any charge rate but it took between 1hr 5mins and 1hr 10mins each time i charged so i guess a 1.5A max charge rate averaging about 1.2A which for a 1200mAh device is pretty good! While charging a progress bar is shown if you press a button and once fully charged the working screen is displayed, it supports pass-through! 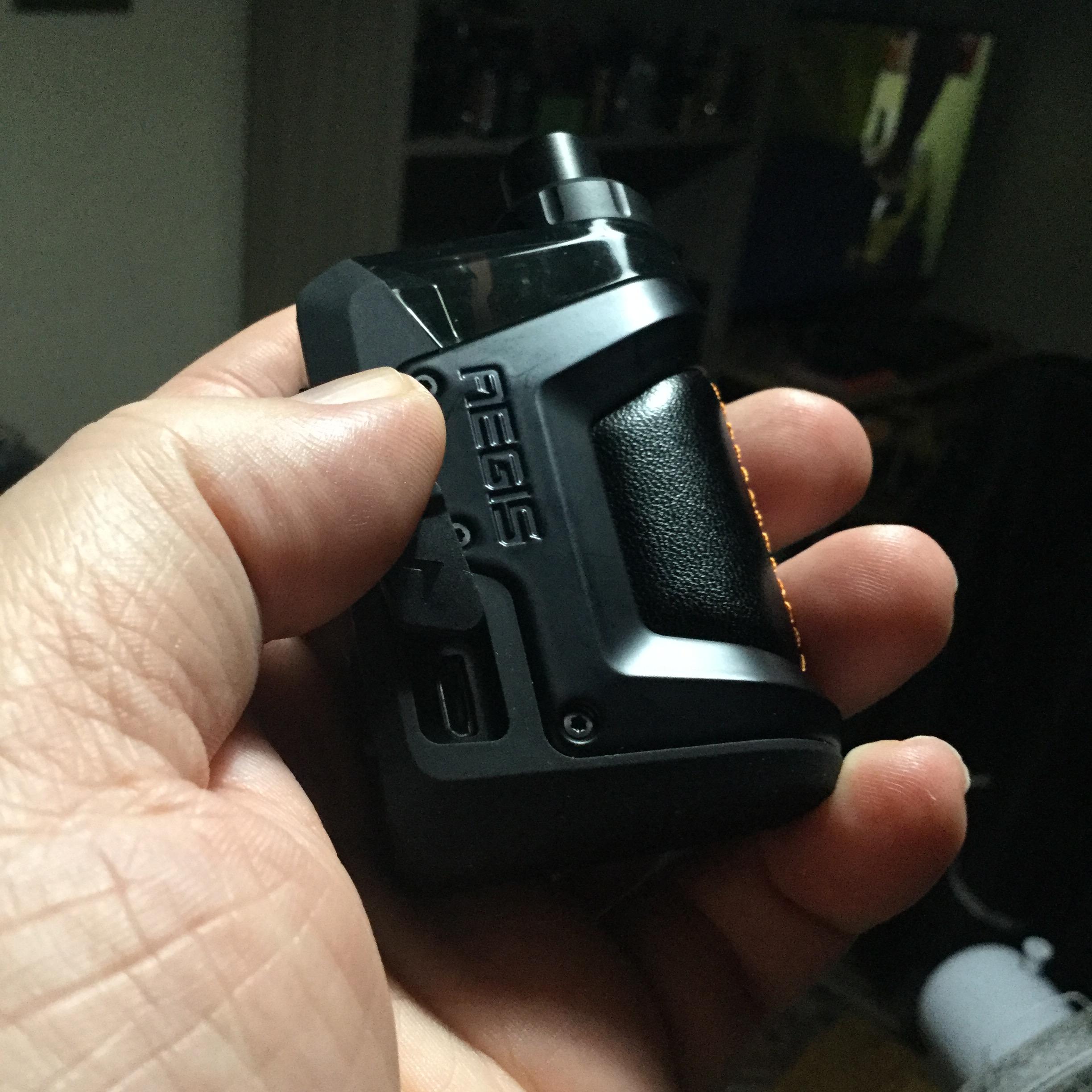 My Experience Using The Device? And Thoughts!

I only really have 3 issues with this device and that’s the tiny display, the battery life which is a trade off for it’s small size which makes it not suitable for a main device and the marketing claiming it’s designed for both MTL and DL. Yes with the airflow closed right down to a slither with the 0.6ohm coil you can get a loose MTL draw but Geekvape need to understand having adjustable airflow and including a narrower bore drip tip does not make a device a dual purpose MTL and DL device unless you also have a compatible dedicated MTL coil head!

It must be said though the adjustable airflow works really well and the draw is smooth throughout and i like that 2 different drip tips are included and they are a standard 510 fit so you can use your own. I also love the top-fill and that i can easily see the liquid level without removing the pod and it’s great to use a pod mod device with zero leaking, just a few condensation droplets on the bay magnet but apart from that dry as a bone!

The 0.6ohm coil has a narrower bore than the 0.4ohm and wide open gives a restricted direct lung vape which can be closed down for even more restriction and even just open a loose MTL is possible although really it’s more suited for RDL but it told me enough that if a MTL boost coil became available the Hero could give satisfactory both medium-loose and loose MTL draws with the airflow just slightly open. The 0.4ohm coil which i preferred at 28W and the airflow two thirds open for the restriction i like gives a semi restricted draw fully open. The 0.6ohm coil i both used at 20w with airflow half open for a very restricted direct lung vape but also closed it down to a 6th open and at just 15w for a reasonable loose MTL vape, this also allowed the device to give reasonable battery life. Both coil heads give really good flavour and although the flavour wasn’t quite pinging like i found when using them in the Zeus Nano Tank i would still say above average for a Pod Mod/AIO device.

The Buck Boost seems to work well as the performance was consistent throughout and i am not putting it as a con but don’t really understand the point of having Bypass mode available on this mini low powered device! Although the Hero has a small battery it’s perfectly adequate for a stealthy out and about device and can see many being interested in it for that purpose. About an hour to fully charge while supporting pass-through is fine and finally i did have one issue which will be of little importance to most unless you use the puff counter for monitoring your puffs. Although the puff counter displays reset as “0000” so should go up to “9999” mine kept automatically resetting at 250 puffs. The first time although unlikely i just thought somehow i had used the button press combination to reset it by accident but when it got to the 5th time of resetting at 250 puffs there is obviously a software issue! 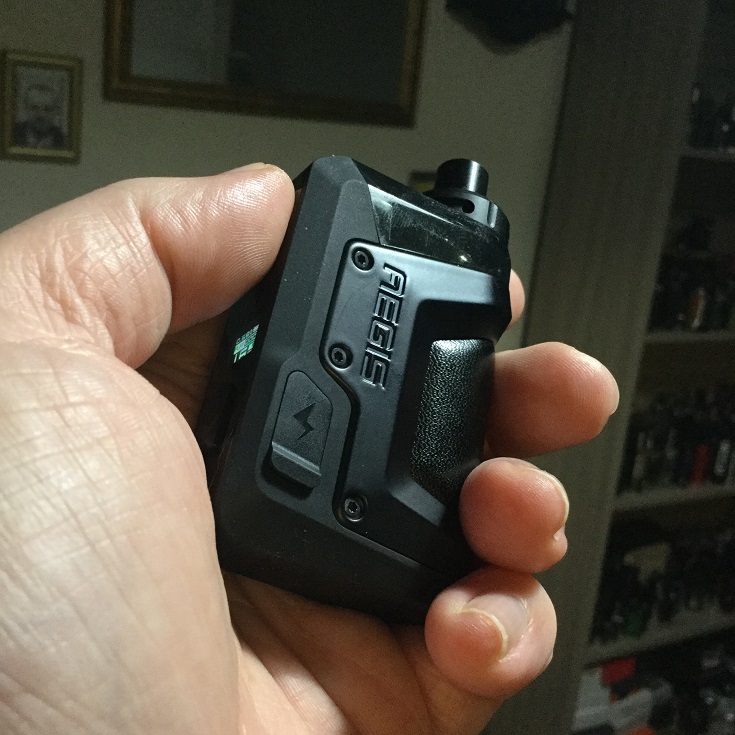 Battery not the biggest (not suitable as main device)
Need a dedicated MTL coil to really class this as both MTL and DL device
Small, cluttered display
Puff counter keeps resetting at 250 puffs
Not Type C USB

I would once again like to thank Geekvape for supplying the Aegis Hero Pod Mod Kit for the purpose of this review, thanks for reading and stay safe!

Another great review Tim. You talked about very interesting points there.

It sure is a tiny little fella!

nice POD and extensive review! Well done Tim @Timwis, I love the sturdy GeekVape, using a legend now… but they’ll have to do a rebuildable… won’t buy a POD I like (for myself, my wife and son already got one… that’s why I made so many recipes 4 POD) till then… but what a nice job you made!

Something about this lil’ Pocket Rocket appeals to me. I don’t really even LIKE pods. I blame @Timwis for this…

That’s a Pod Mod that really appeals to me!