Here is a basic chart for the addition of acids - If using additional acids I use the predominant acid and maybe the secondary. I tend to use citric and tartaric in very small amounts generally under 0.5% more often around 0.25% as too much can mute flavours. Malic acid you can go a lot more than that depending on what you are shooting for. Malic acid will work better with a sweetener (stevia is better but most use sucralose). I do try not to add sweetener and you will still get good results without it as most of the fruit flavours we use are quite sweet already 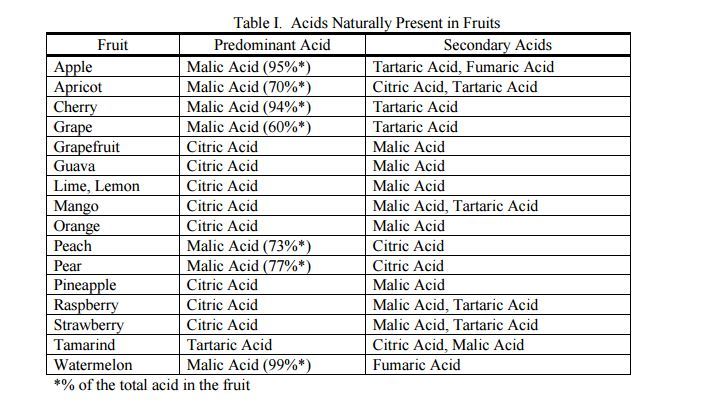 Cactus INW & Fuji FA
We have all had that fruit mix that is dry in the mouth and it kinda spoils the vape try adding a tiny bit of either Cactus (INW) or Fuji (FA) to make it a little juicier. Both flavours at low % are pretty much saliva stimulants changing the feel of the vape without changing the flavour (by low% I am talking about .25 - .5%)

Strawberries
Addition of lemon or a lime flavour at small % can help your Strawberry mixes by giving the strawberry a little tartness.

Cherry
Super hard to work with and not get a medicinal taste (try Cherries iwn, Cherry filling flv, Wild Cherry Real Flavours for good cherry flavour) small amounts of coconut with cherry will make a cherry much better.

Blueberry
Try small amounts of raspberry, a Black Current, Raisin or it may sound strange but a Banana Cream (I tend to use LA (colourless) at about .2%).

Pear
Try adding a pear to sweeten the any fruit flavour.

Coconut
It is rare that I don’t add a little coconut to make my creams a little creamier.

White Chocolate
Low % of white chocolate added to custards or creams will make you vanilla custard mixes even fuller.

DragonFruit (TPA)
This is an interesting one it contains a chemical called Triethyl Citrate this will help all your flavours homogenise into a single flavour. TPA sells it as a separate chemical but it can be found in a few other TPA flavours.

Chocolates
A lot of people struggle with chocolates altogether too many of them have a chalky finish when used, many of them get bitter at high wattages or temperatures. Medicine Flower Dark Chocolate is one that doesn’t have either of these characteristics but it is super expensive. Bend you chocolate using Vanilla Bean Gelato (TPA) at around 1.5% ( it will also give the chocolate a waxy flavour that chocolate should have) and Malted Milk (TPA) at about .25% (will smooth the sometimes harsh notes that chocolate can have)

Malted Milk (TPA)
This is a great flavour for smoothing rough edges use it sparingly or the flavour will poke through.

Joy (FA)
Load of people hate joy (I guess they are joyless lol) but used in low % it can really help with bakery it can turn yeasty at higher % go lightly.

Stevia & Erythritol
I love stevia as a sweetener it doesnt seem to sit on top of the flavours like a blanket as sucralose does, it imparts a sweetness that is in the flavours (for want of a better way to describe it). You can get a slight bitter note from stevia which relates to the purity of the Rebaudioside A used to make the mix. To counter this bitterness (if you can taste it) you can use Erythritol at a 1 stevia : 3 Erythritol ratio.

There are a few vape companies now selling stevia mixes I prefer to make my own (like I do with my acids If anyone is interested I will put together a few mix ratios/ recipes) for a couple of cents rather than buy it for a couple of $.

Saline
The use of saline in mixes is pretty widespread in commercial juices (Charlie Noble and a few other juice companies use it quite regularly). I hear you ask what does it do? Well aside from the everything tastes a little better with salt it will moisten the mix a little (similar to cactus and fuji previously mentioned) but saline can be used with anything to just give an extra push, bakery, fruits, nuts, tobacco are all good with a smidgen of salt ( I use the .9% bp saline you can buy from the chemist but you could always make your own). Don’t use too much .25% is generally enough we don’t want the juice to be salty.

Frosting (FLV)
It is a great sweetener adds a powdered sugar feel and taste to the finished juice (.5%- .6%)

Cream Cheese Icing (LA)
Also a great sweetener low % will give your finished product a nice sweetness that isn’t heavy.

I do have a few more little bends I use but I have probably bored you enough already and these are the ones I find myself using over and over.

Thanks for taking the time, and for sharing!

There a couple different schools of thought when mixing powders and liquids.
I will use the easiest one but will detail the other as well.

Erythritol
WILL NOT dissolve in pg properly it will recrystallize after a little time even if you manage to get dissolved.
It reaches super saturated solution at around 6-7% in vg so I stick to 5% and use the same method as previously described.

It will take some time to dissolve and more than likely heat will be needed.

Stevia
I use @Chewy 's pyure clone for this and make it with 100g of pg. (he may have a totally different method)


Remember to rate it at e-liquid-recipes.com!

As i said previously my maths may not be correct but this is how i do it and as long as i make all of them the same way then my results are consistent.

Great read. I’m pleasantly surprised that for those listed ingredients I do have, I’ve been able to make some of these connections on my own. Thanks for posting this. Very helpful.

Great info for folks here! Thanks @woftam
As you say it doesn’t matter which method you use when adding powder, as long as it’s consistent.

Awesome job @woftam - thank you so much!

@Chewy…what saline do you use? - I really wanna make your shortbread recipe

Absolutely brilliant write up. This will invaluable to a mixer such as myself (lazy bastard). Thanks mate.

I got mine from the chemists.
0.9% saline solution.
It comes in small plastic vials, can’t remember the name as I decanted them in a glass bottle for ease of use.
The shortbread is really tasty and I put that down to the rice. Like everything it gets better the longer it steeps.

Thanks @woftam I appreciate your posts, they are really informative, especially this one

Great stuff! I have it saved. I’m just not there yet, lol. Kinda like “one thing at a time” for me. I’m still reeling from the results of homogenization. Have a bunch of mixes I want to brew up using it. Every step of the way just gets better and better. I am excited about taking this step, just can’t stack it on top of the changes in progress. These juices get any better and they will have to be classified.

Thanks @woftam for compiling and sharing all this information. Some of it I knew about, but a lot of it I did not and was mostly way off on amounts to use. Very helpful. Thanks!

Coconut
It is rare that I don’t add a little coconut to make my creams a little creamier.

What is your favorite Coconut to use for a creamier cream and what percentage?

I have FLV White Chocolate on the way, RFSC WC and WF WC but no MF…sigh

I have to try this!

@Woftam I am thinking of a strawberry kiwi with a touch of sour green apple candy. Already have a few different flavors I am gonna experiment with but what % range do you think CAP Sweet Candy would be best? I know I have to watch out for too much EM so going to take that into consideration when selecting flavors.

The most I have used Sweet Candy at is 1% and that is very sweet to me (but it was required to hit the profile) so with that in mind I would perhaps start at .5 and build on it if you need to.

1% is the highest I have ever gone with it, having been keeping up lately though so was hoping I didn’t miss something.

Thanks as always flavor guru!