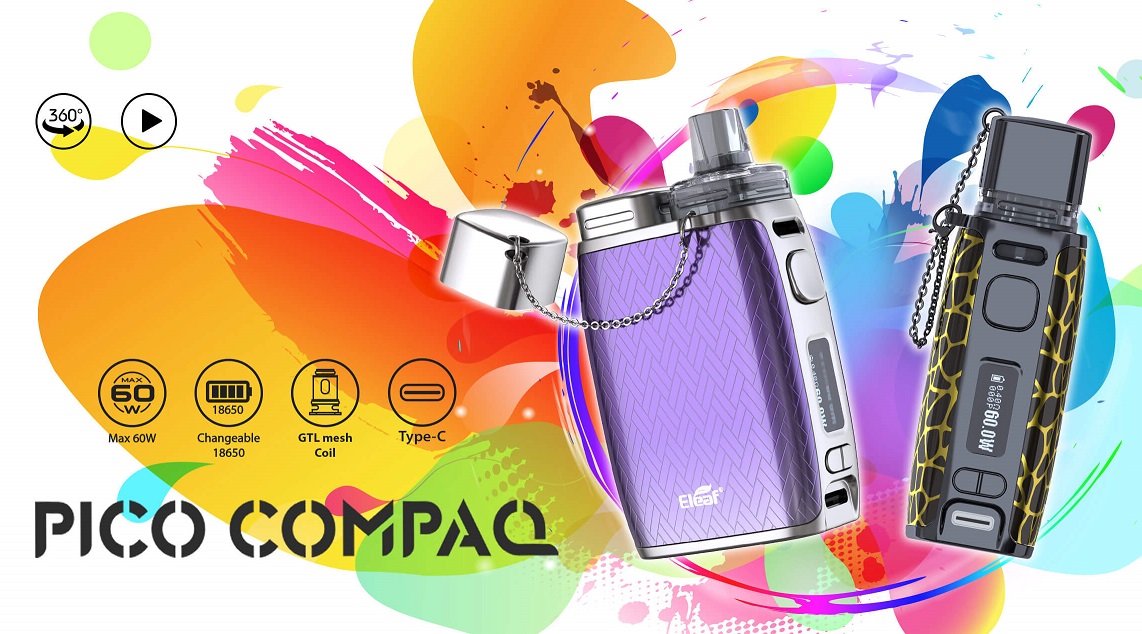 Eleaf as one of the Jwei trio is one of the vaping industries oldest manufacturers and have continually brought us good quality budget devices following whatever the current market trend may be.

The Pico Compaq AIO device is an AIO device with a design inspired by Eleaf’s most successful and loved device the Pico. The Pico has been released in various variants with both 18650 and 21700 versions and with the Pico Squeeze even a BF option. The Compaq of course has the trademark top battery cap but with a square form which has a spring loaded bayonet fitting. The device is a simple wattage only device which comes with a dust cover which can stay attached via a chain. Coming in six colour/design options let’s check the latest Pico out! 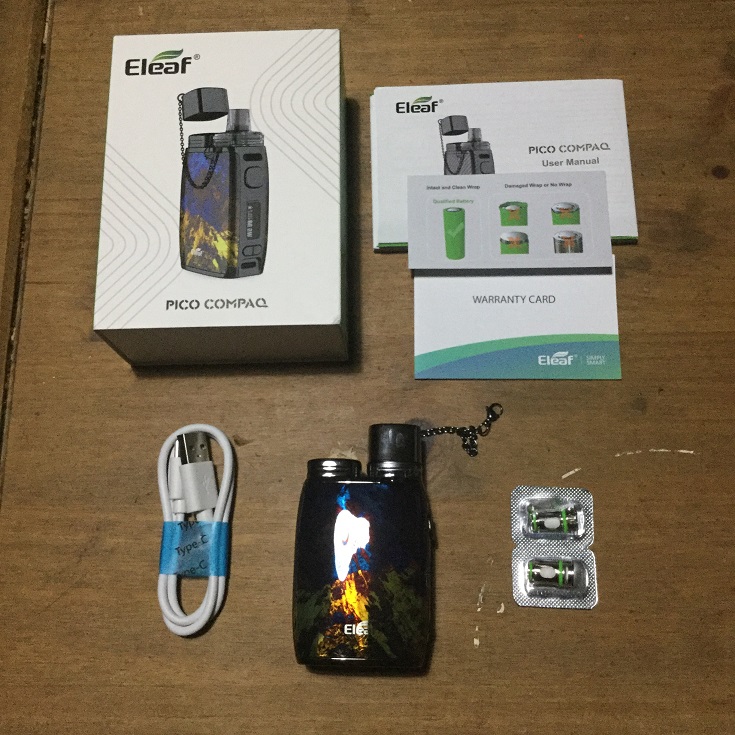 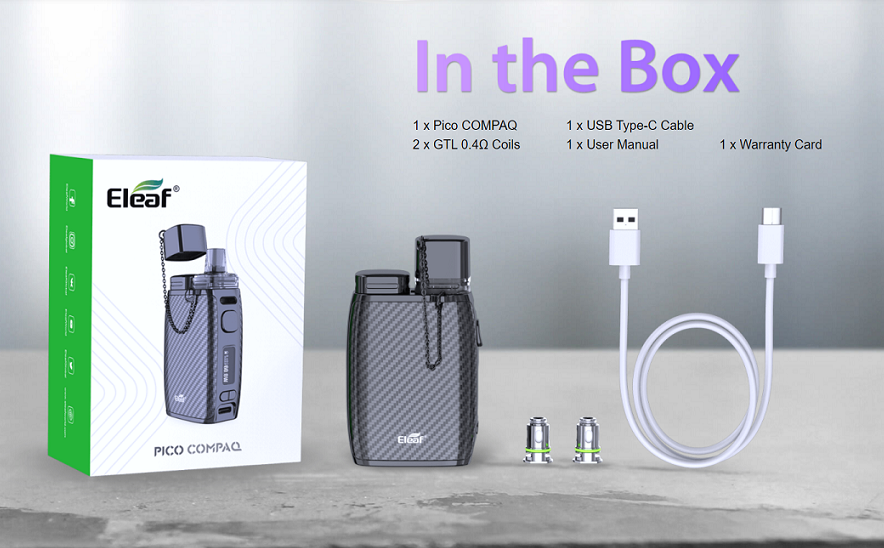 The Pico Compaq comes in cardboard box packaging with outer cardboard Sleeve. On opening the box i was pleasantly surprised as the device is very well made and both looks much nicer and is far more ergonomic than it looks in any photos i have seen. I received the Dazzling Marble option which has a metallic finish with Gold, Blue and Red in it’s design which glistens as it catches the light. The options are Gradient Purple, Gradient Grey, Carbon Silver, Gold Ripple, Carbon Black and Dazzling Marble.

The sides are curved which really helps to give a nice ergonomic feel in the hand and the face has an open slot for airflow top followed by a square light switch style fire button. We then have a small elongated screen central followed by a horizontally positioned navigational rocker and finally a Type C USB port at the bottom.

Looking down from above with the dust cap not attached we can see the protruding loop to one side then at the front the mouthpiece of the pod that protrudes out of the pod bay. To the rear of the top we have the square battery cap and then looking at the base, branding, safety marks and venting holes! 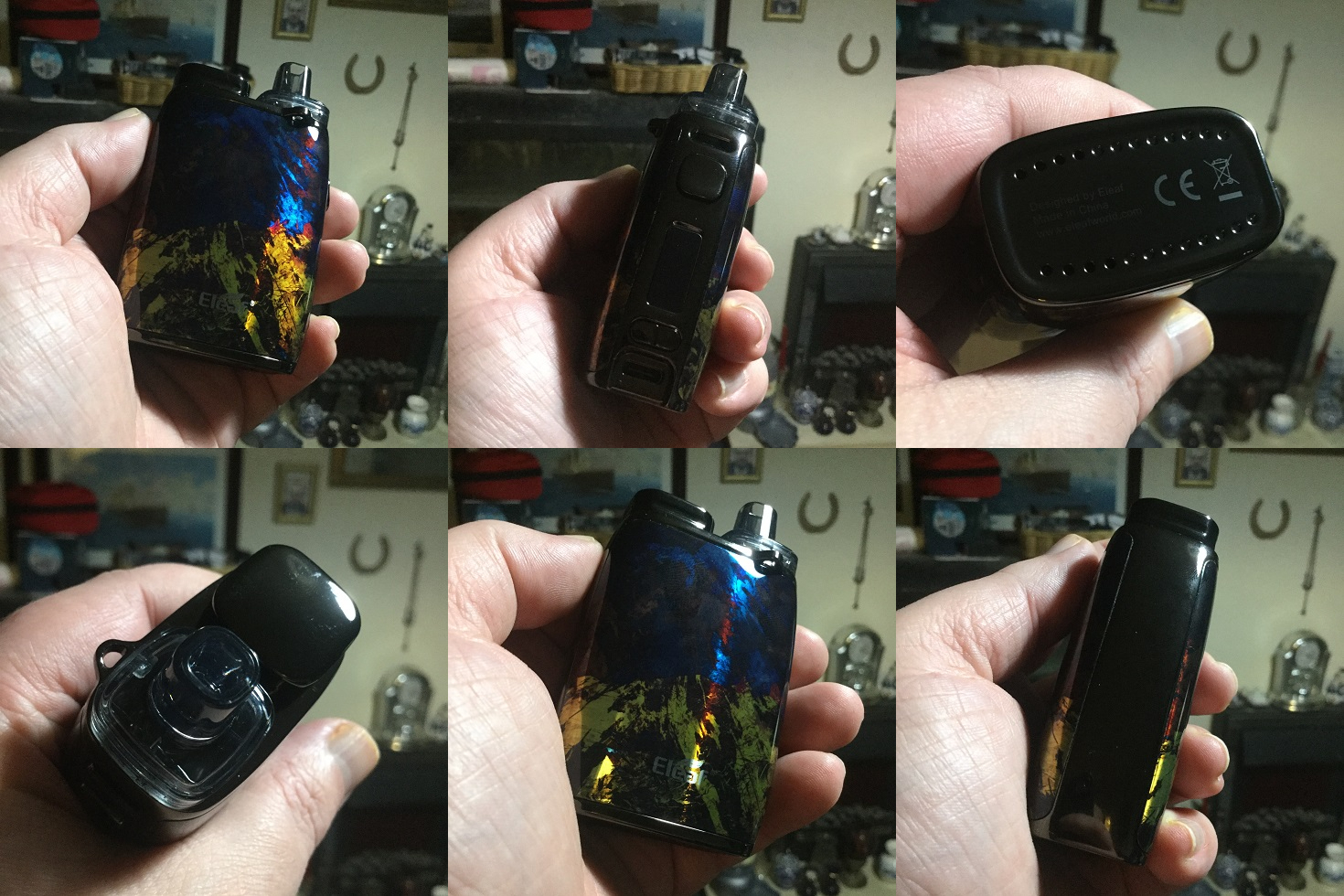 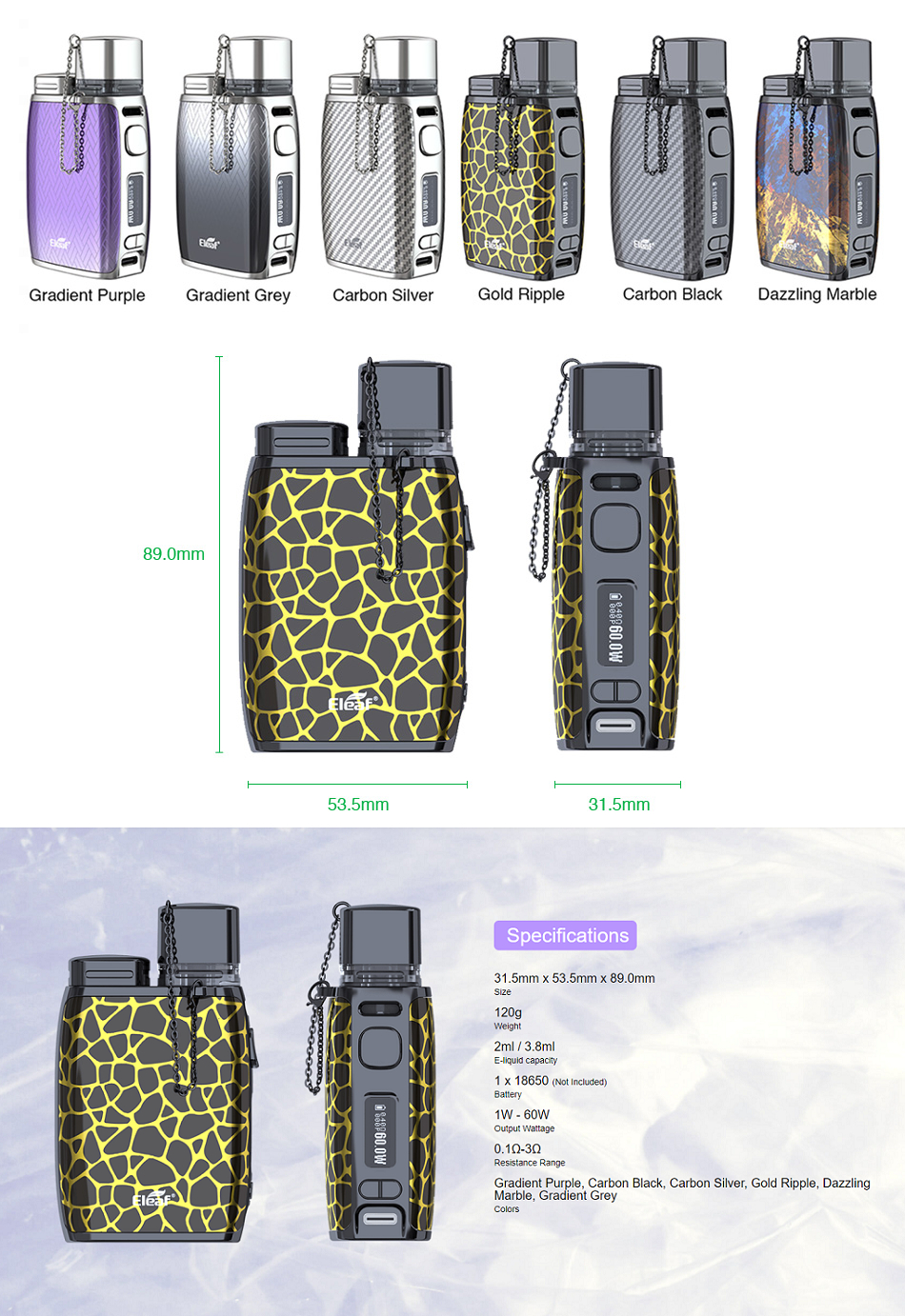 One of the features of the Pico Compaq is the dust cover that can stay attached to the device when removed via a chain which has a clasp that hooks through a loop on the side of the device. I get the thought process especially in these times when we need to more micro manage hygiene and it’s far from the first device that has a dust cover included but including a chain so it can hook on the device is something i haven’t seen before and i hate it!

As soon as i had took the photos for the review it went straight in the garbage as i just don’t want a dust cover annoyingly swinging on a chain when i vape and the all routine of constantly removing it to vape would drive me insane, i admire anyone who can tolerate it more than a few hours.

This does leave a generous sized loop protruding annoyingly from the device which i suppose does allow the lanyard wearing vapers to fit a lanyard and wear it around their necks but then other than in influencer photo’s has anyone ever actually seen anybody using a device like this with a lanyard? I know i haven’t, ever!

The pod is one moulding including an incorporated drip tip so you can’t fit an alternative, underneath the mouth section of the pod we have a ridge before the main pod body which can be used to get a grip when removing the pod from the device. The pod is clear so it gives perfect visibility of the juice inside but unfortunately we have no viewing window on the device and apart from the mouthpiece section the rest of the pod gets inserted into the device. 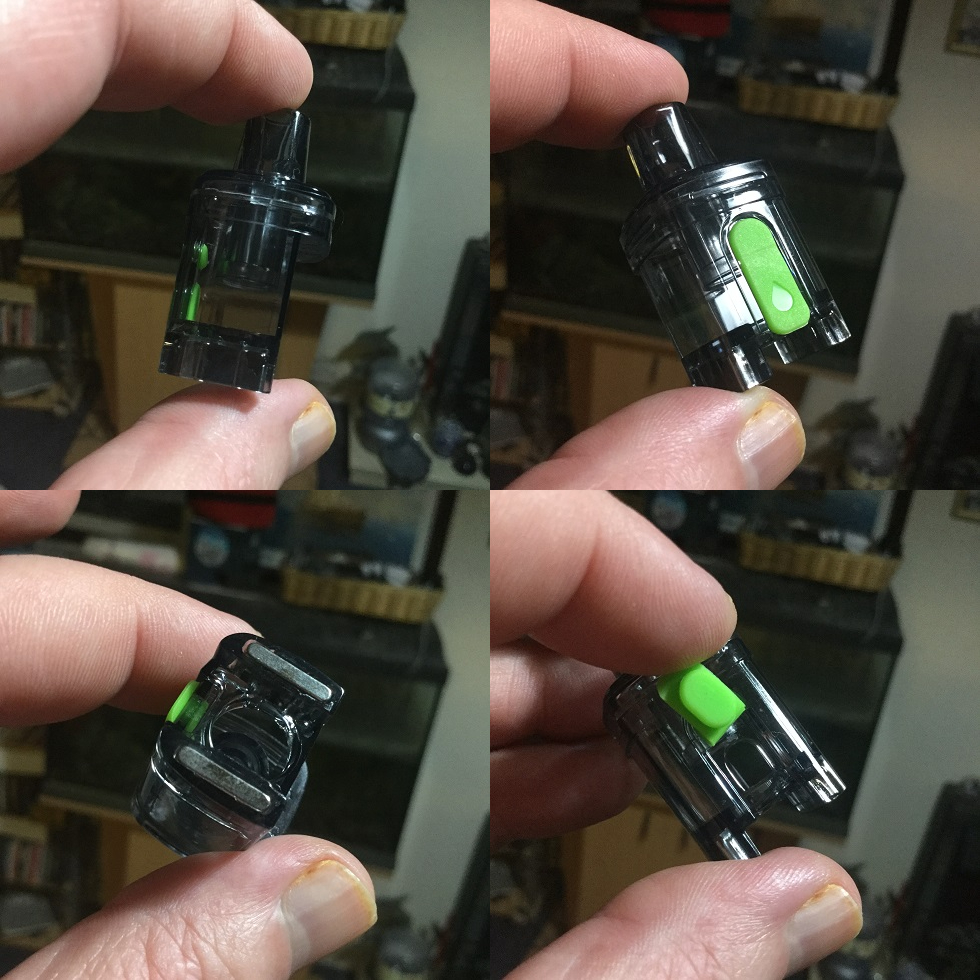 On the rear of the pod we have a Light Green Silicone flap with fill port plug which stays attached when lifted. The fill port compared to most pods is huge so it can be filled quickly while also letting the air escape, the standard pod holds 3.8ml and of course the TPD pod 2ml.

Looking at the base we have a round central opening for the coil head to be press fitted into place and either side elongated magnets. 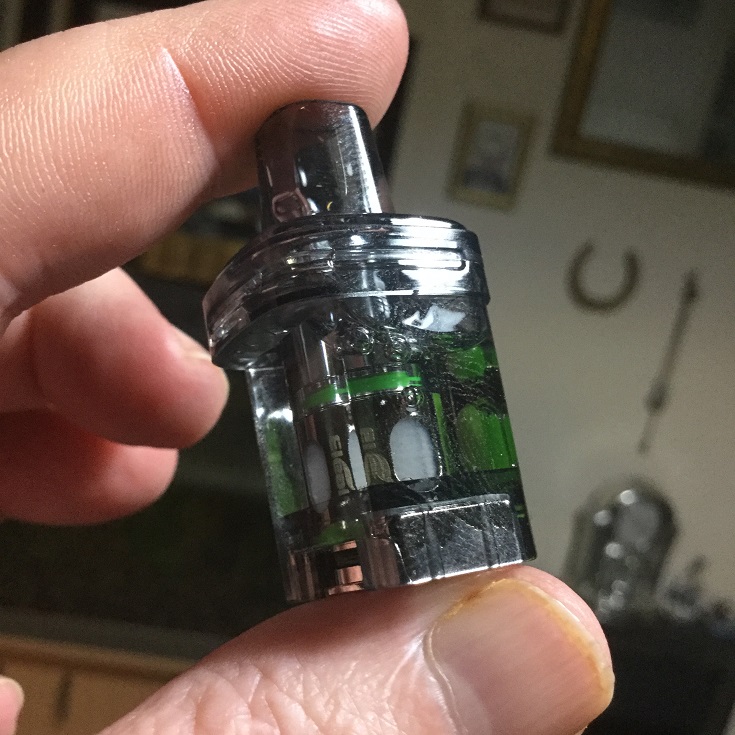 You receive 2 of the same coil heads in fact as far as i am aware it’s the only coil head available which is a big con. It’s the new GTL Mesh Coil Head with a resistance of 0.4ohm, Kanthal and rated between 20w to 30w. 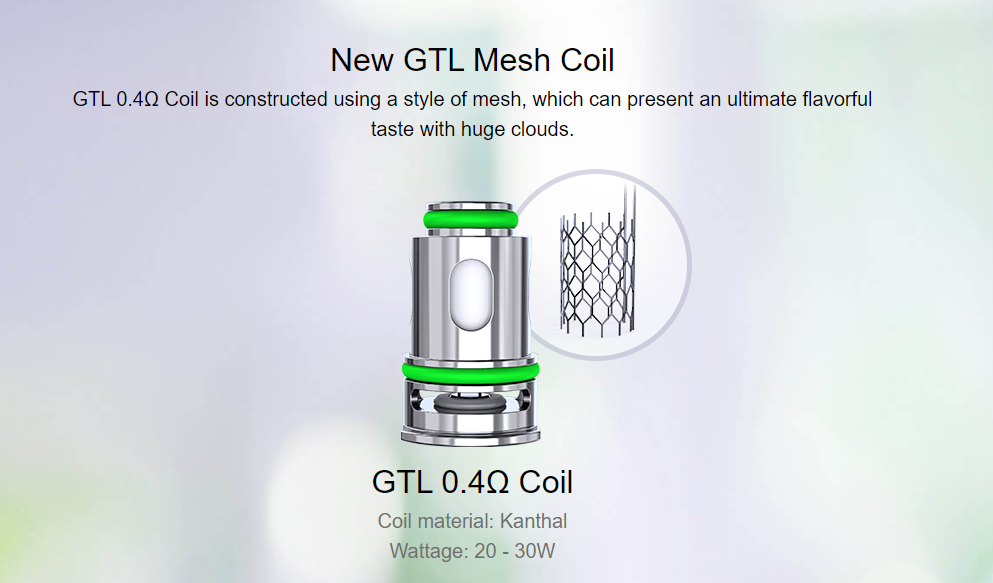 The coil head has quite a wide inner bore for a 0.4ohm coil head and also very large wicking holes, as mentioned it just gets press fitted into place.

Looking inside the pod bay we can see the Gold plated, spring loaded contacts central with silicone surround and to each side an elongated magnet to match the ones on the pod, finally we can see the slanted front airflow slot. The magnets are strong but there is a ridge on the pod to get hold of to pull free, also it can be wiggled about slightly but when in normal use there is no movement! 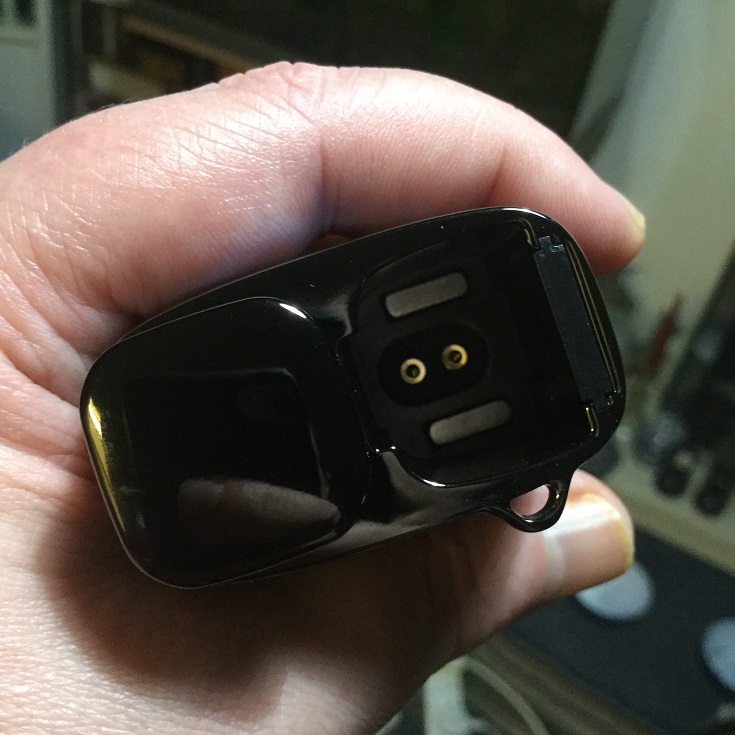 The Pico Compaq doesn’t have adjustable airflow which is a big let down, what it does have is a large open slanted slot at the top of the device which directs air (and plenty of it) down to the base of the coil which then will enter through the coil heads inlets and up through the inner bore. The only way of controlling the amount of airflow on a device like this is by the diameter of the inner bore of the coil head which with the coil heads included especially for a 0.4ohm coil is quite wide so before even trying the device it was obvious to me this would give an airy vape!

One thing the Pico is loved for is the way we have a top battery cap which allows the battery to protrude from the main body so the device can be shorter than the length of the battery making it a small compact unit, of course the idea has been copied by other manufacturers which is the norm when it comes to vaping manufacturing.

To stay true to the Pico design the Compaq also has a top battery cap but it is square which at first i thought although aesthetically pleasing is quite impractical as it would need much more room to unscrew compared to a round cap. But as it turns out this has a spring loaded bayonet fitting like seen with many RTA top-caps and just a slight turn and it’s off. When fitting back in position it needs pushing down against the spring before again just the slightest of turns locks it in position. This is really good in fact probably the best feature of the device and one that no doubt will be copied as the idea can quite easily be adapted to a round cap!

The orientation is labelled at the bottom of the battery tube and clearly on the underside of the cap and once in place we have no battery movement whatsoever, cracking job! 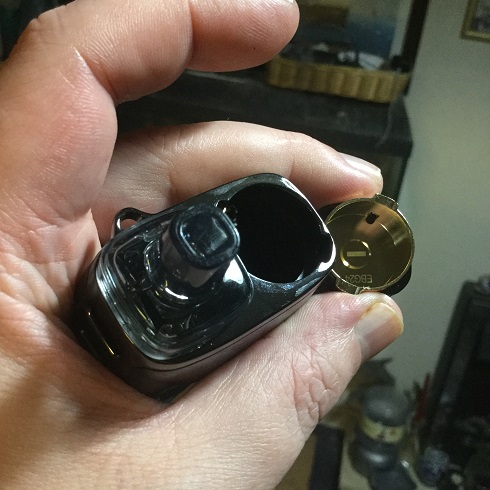 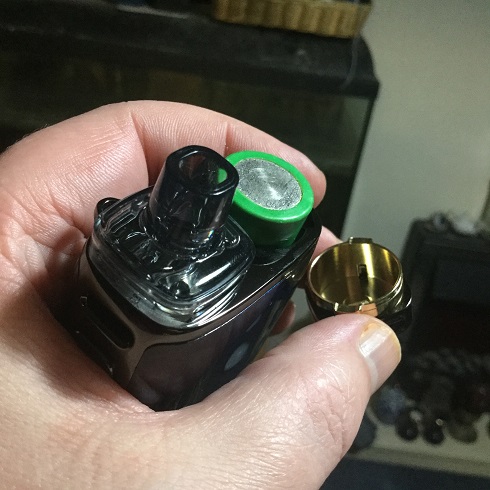 The Pico Compaq has an old school minimalistic display but it’s nice and bright and gives all the information needed for a simple 60w power only device. To the left we have an upright battery status bar and then to the right of the bar we have the resistance top and puffs below. The entire right half of the screen displays the wattage in nice large font! 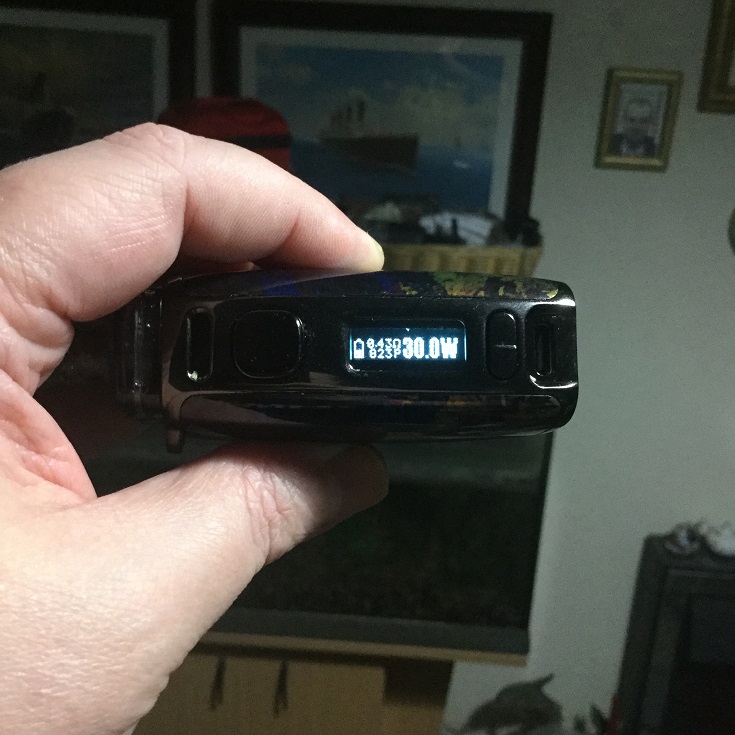 Once on the Compaq is a simple variable wattage only device which has no menu system whatsoever but does have a few combination button press features.

Down and fire together flips the display (but not the buttons) and then repeating the process flips it back again. Up and fire together resets the puff counter and up and down together locks and unlocks those buttons but when locked the device still fires! 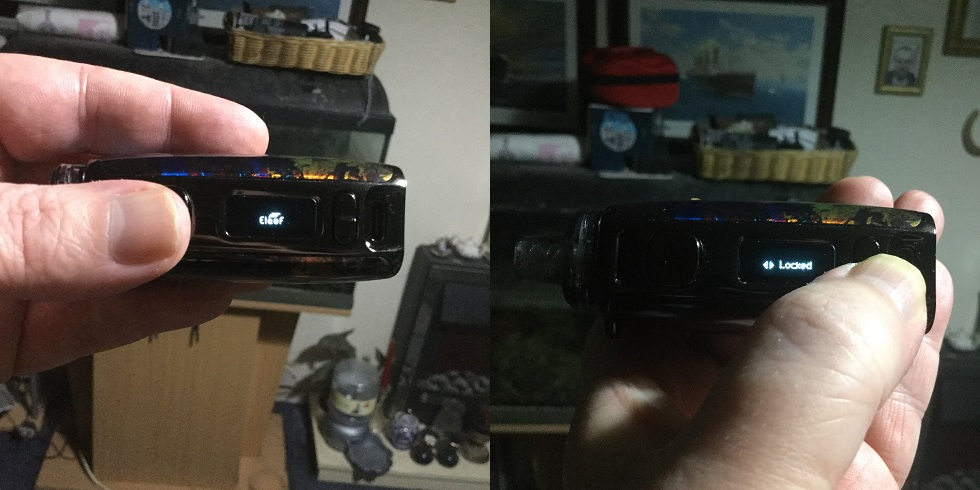 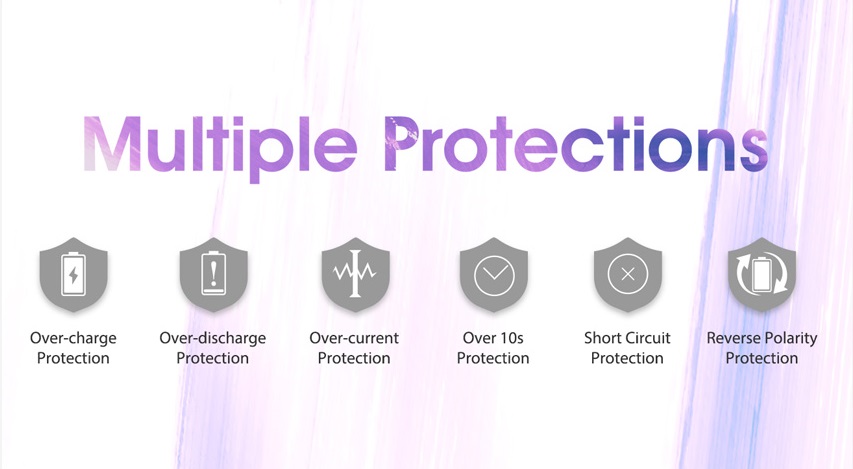 As usual i will go into “Groundhog Day” mode to say i never recommend charging in the device but if it’s your only option the Pico Compaq both has Type C USB and a 2A charge rate, it also supports pass-through. Because 20 clicks on gives the firmware version then despite it being such a simple adjustable wattage only device that tells me it’s also firmware upgradeable. 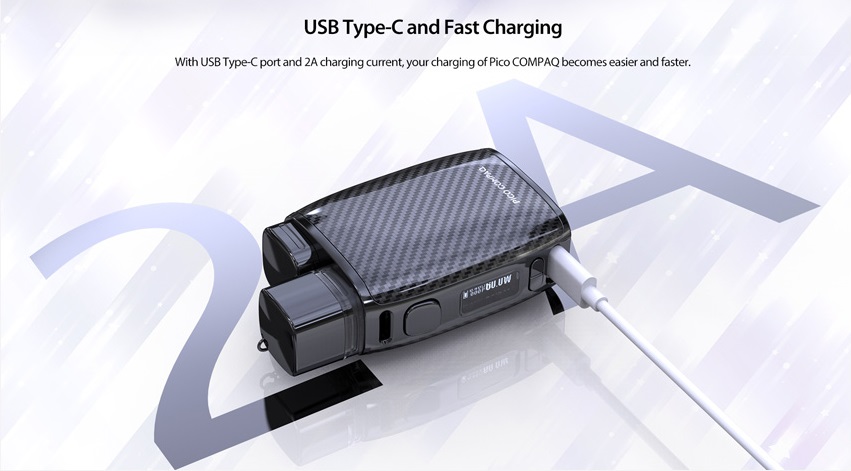 My Experience Using The Pico Compaq And Thoughts!

The first thing to mention is i found the device very comfortable in the hand and for the price point the build quality is surprisingly good. I love the battery cap and spring loaded bayonet fitting which i can see being implemented on future devices. The pod fits securely, is clear and fills quickly and mess free but it needs removing from the device to both check the level and to fill which is a pain! The incorporated drip tip is very comfortable but still would prefer to be able to fit my own, the device is also very simple to operate and i like the adjustment increments. I also like the light switch style fire button which i know some people don’t like but this one can be pressed anywhere and it fires, the navigational rocker i also like but can see it being a little awkward for those with thicker fingers.

Not having adjustable airflow really lets the device down as does the fact only one coil head is available even if you do receive two of them. Both the airflow that gets to the coil and inner bore doesn’t suit the 0.4ohm coil making it a cool vape but with those huge wicking holes i thought this could be solved by upping the wattage but even at 35w it just couldn’t keep up and that was the first coil spent. The flavour is actually very good so if only the airflow could be reduced to give more warmth which in turn would probably even improve the flavour further then this would give a great vape but as is it’s a cool one size fits all semi restrictive vape which will suit some people but it needs more versatility to give the better AIO/Pod Mods a serious run for their money!

This is far from a bad device though and if it had adjustable airflow, more coil head options and a liquid viewing window then this has enough about it to be a very good device but even as it is i can certainly see those that love their Pico devices and who have considered trying an AIO/Pod Mod being tempted by this! 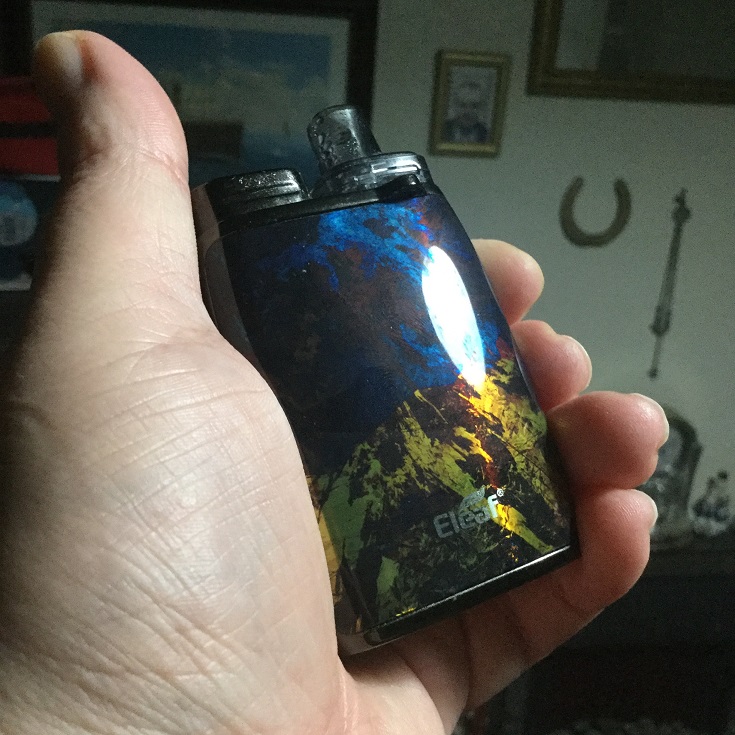 I would once again like to thank Ella from Sourcemore for supplying the Eleaf Pico COMPAQ 60W 18650 AIO Kit for the purpose of this review, thanks for reading and stay safe!

Very good review. I admit I like it. The loop left on the mod can probably be cut off.
They probably waiting to see how people take to it before they release more options and make a few upgrades.
To me, I’ll use it as is. I only worry much about airflow when vaping MTL anyway