This is one of those marathon reviews, took me forever and I crawled to the finish line. The Pico S with ELLO VATE was provided by www.eleafus.com for the purpose of this review.

I was planning on keeping this review short but dammit if I am not a long winded bastard. Check out my Pros and cons as well as my final thoughts at the end if it is too long, pretty much sums it up there.

6 colors to choose from:

Eleaf has made a change to the venerable Pico line, new flashy space age cosmetics, some will love it, some hate it. I myself was tired of the old cosmetics, I even mentioned in a review of the Pico 21700 that I was pico’ed out. They stuck with the 21700 battery platform but it will also take 20700 and 18650 with the supplied adapter. I am a fan of single 21700 mods, the extra power and mah has me finally using single battery mods again, I have been buying them up like hot cakes.

Comes with the ELLO VATE tank, don’t know and don’t care how they came up with that name but at least the cosmetics match. The tank also includes new coils, a what they call “Net”, looks like mesh to me and a Multi Hole coil which is essentially a thin strip of metal with holes punched through it. 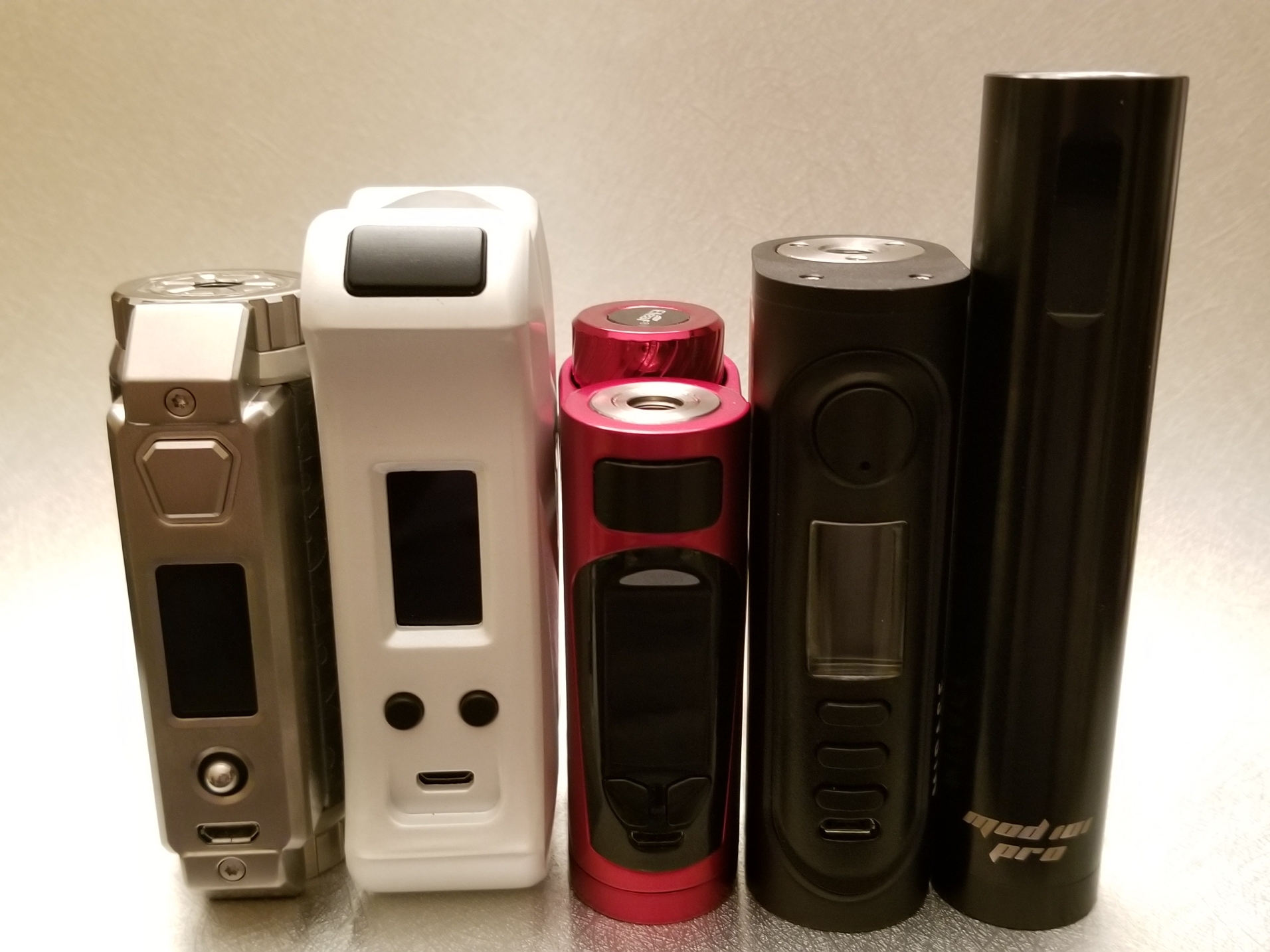 How they get that is by using a tube that screws into the base, pretty smart but the tube can be a pain sometimes to screw in and out, no ejuice fingers…no no no. 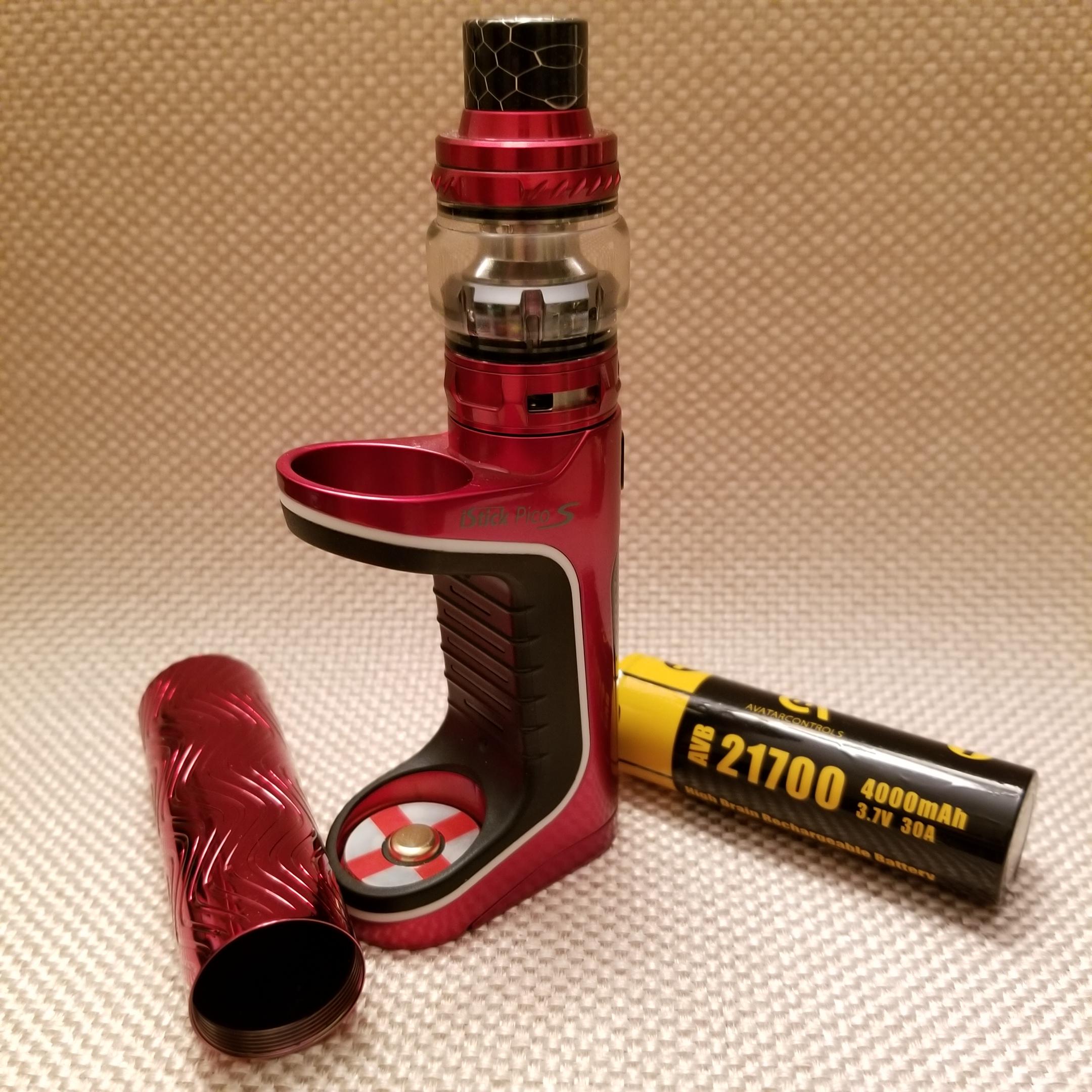 That battery tube does limit the size of the tanks it will take, I know I know, you wanted to put your 40mm Titan tank on there…sorry bub, no can do, 28mm max. 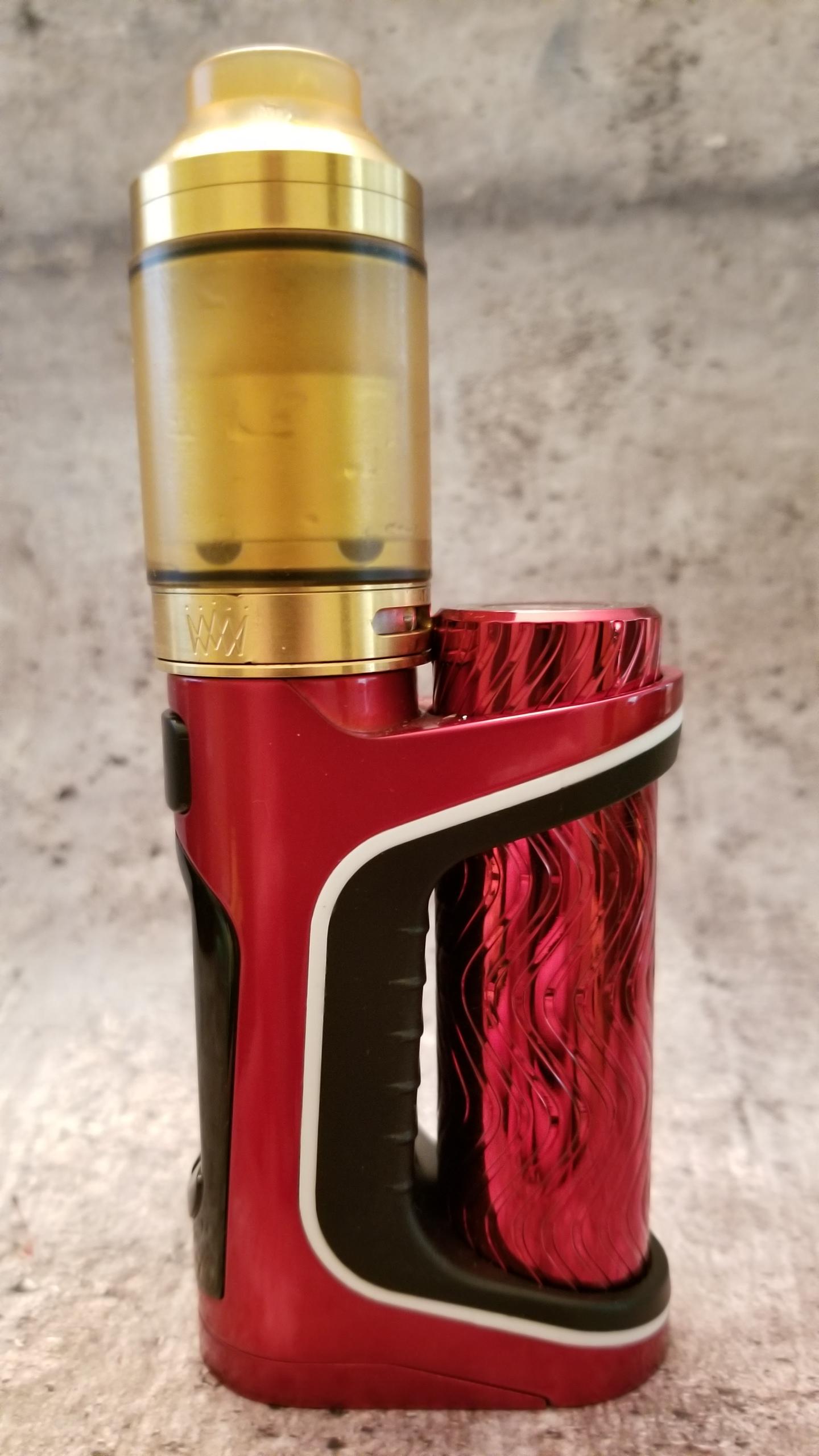 The ELLO VATE is a 25mm tank and it looks fine on the Pico 2 with no overhang but that is about the max so you don’t get the dreaded muffin top. 24mm tanks look good too but some tanks will have a gap, not crazy but sure would be nice if it was flush. 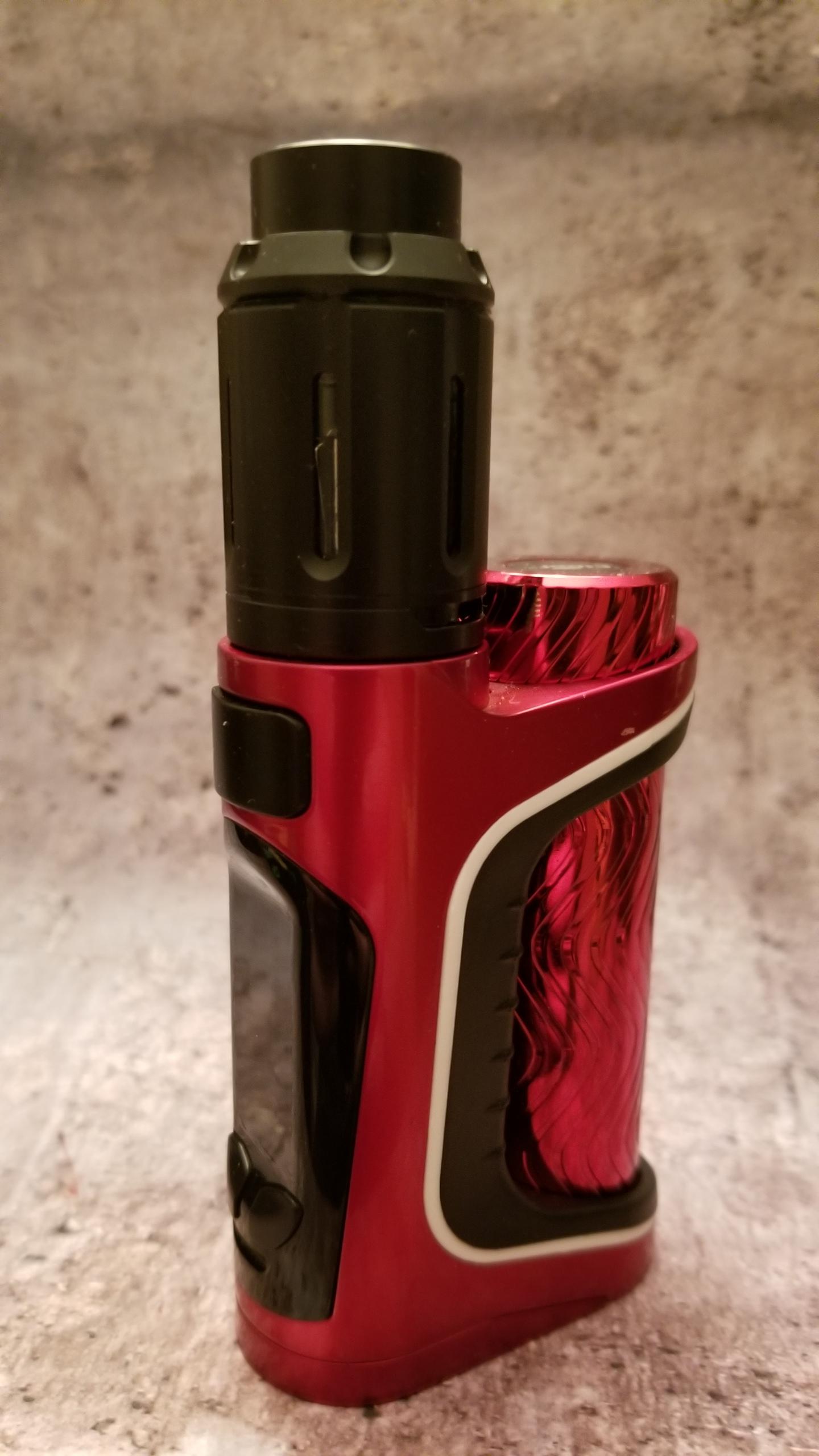 The screen is…well, pretty much the same, a nicer screen would have been a welcome addition, this thing looks ancient and the menu takes me back to my Atari days…pong anyone? 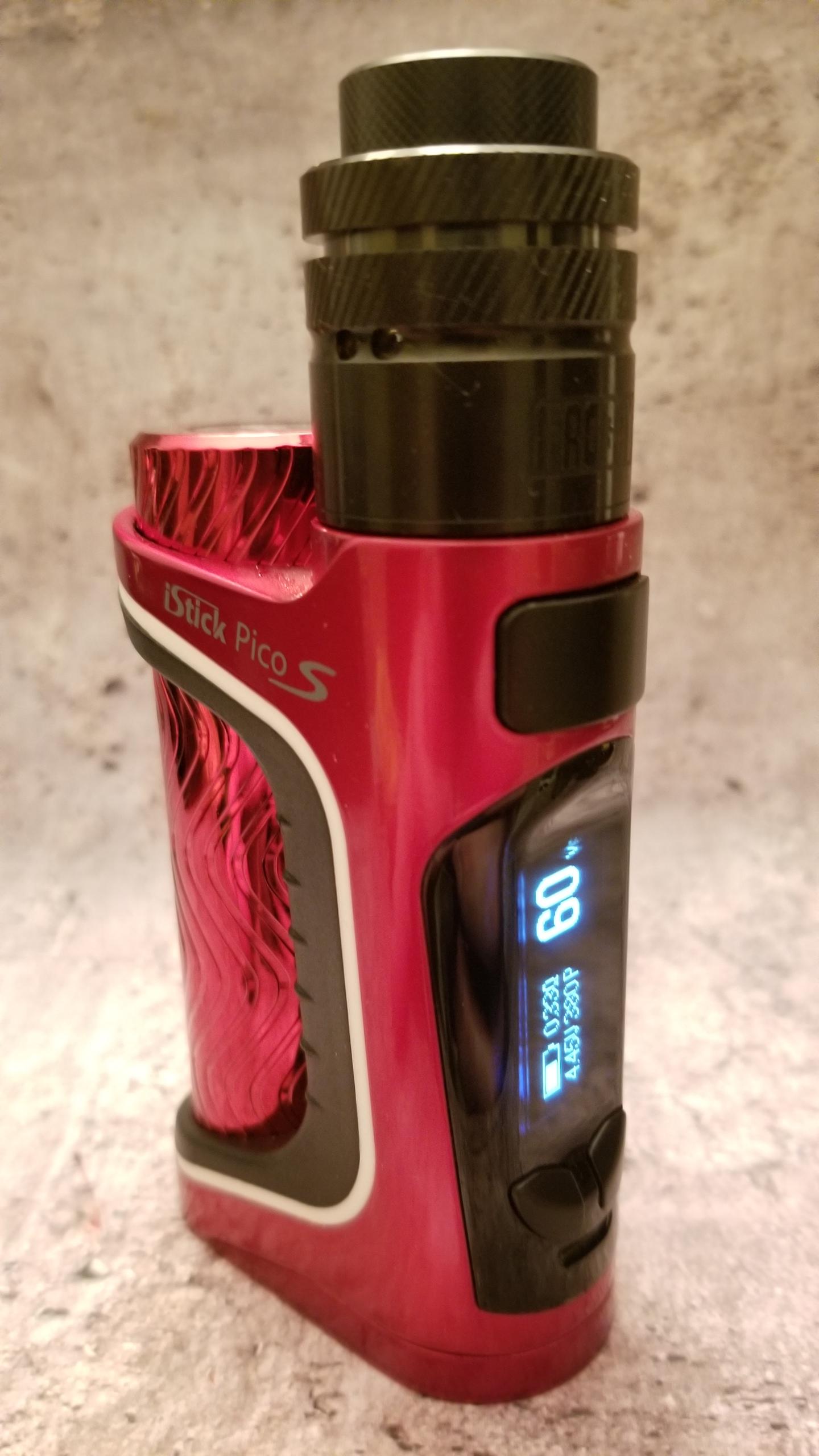 At least the up and down buttons are on the faceplate now, not underneath the mod like so many prior Pico’s. The fire button is well placed, comfortable enough to fire with either your finger or thumb. It is a rattling sucker though so if your jogging with it or in the middle of an earthquake it is gonna bug the crap out of you.

Not the most comfortable in the hand but not uncomfortable either. If you are looking for longer battery life in a small mod it fits the bill but pound for pound the Joytech Espion which is a dual 18650 is actually a better choice IMO, taller but not as bulky. There sister companies anyway, I am choosing the other sister when it comes that.

The finish is beautiful though, they did a great job there, flawless was my review sample and the Ello vate tank is the same.

Watts are in .01 increments throughout the entire range, not a fan of that personally, under 30 watts makes sense but over that and it just takes longer to get to the higher watts. Should be in 1 watt increments after 30 or even 35 watts, who really needs 76.3 watts, there is no difference.

Every company nowadays is claiming super quick 0.0000015 multibajillion second response time, yeah whatever. Really it is odd to find a mod that doesn’t fire quick nowadays. Eleaf makes the same claim with the Pico S, a claimed 25 milliseconds saying it is faster than ever. Funny thing is it does feel quick with the included ELLO tank but with some other tanks it seems a tiny bit slow for the gitty up. Overall though it is about the same as most mods with the exception of some. The preheat function does give it that little extra kick though, just wish it was percentage based rather than set your watts and duration.

Seems somewhat accurate in wattage mode though, I do not run tests but compare to mods that have proven accuracy and the Pico S seems right in line there. Not a mod you want to run full out 100 watts, that is not recommended for any single 21700 mod but it can do it if you want to.

Ugh, first time trying out TC it dropped me out and into power mode at 10 watts, hate that. Happened a few times, enough that I wanted to stop right there. Even when I got it to work good in TC it would sometimes pull the same act the next morning…frustrating.

Dual coils need not apply here, even simple builds with higher ohms will give you fits in TC mode. Got the best performance from single coil builds which is what I normally recommend for single battery mods. Gotta try the dual coils though, you can build high enough to get them to perform well but the Pico S said NO more often than not.

When it did work it was enjoyable enough but could be on the hot side, other times on the cold side. I normally give temp ranges that work but it was all over the place depending on the tank and build used. Trying the TCR function didn’t provide a lot of relief as it varied, between 105 and 110 was about as close as I could get. It did offer good dry hit protection even when it was firing hotter than normal but you will know because it begins to pulse when the juice is running low, not smooth like good TC mods.

The main problem here seems to be how it reads resistance, always low, sometimes close by 0.02 and sometimes far off by as much as 0.09, it never hit dead on for me and for a proper TC vape the resistance is key.

Pretty much pass on the Pico S if TC is important to you, you can get decent results with a single coil build but not consistent results so it fails in that regard.

A little more flashy than I personally like but the finish is excellent and overall functioned without incident. Does come preinstalled with a sort of bladder type gasket for the fill up, I guess it is there if you happen to tip your tank over when refilling to stop spills. 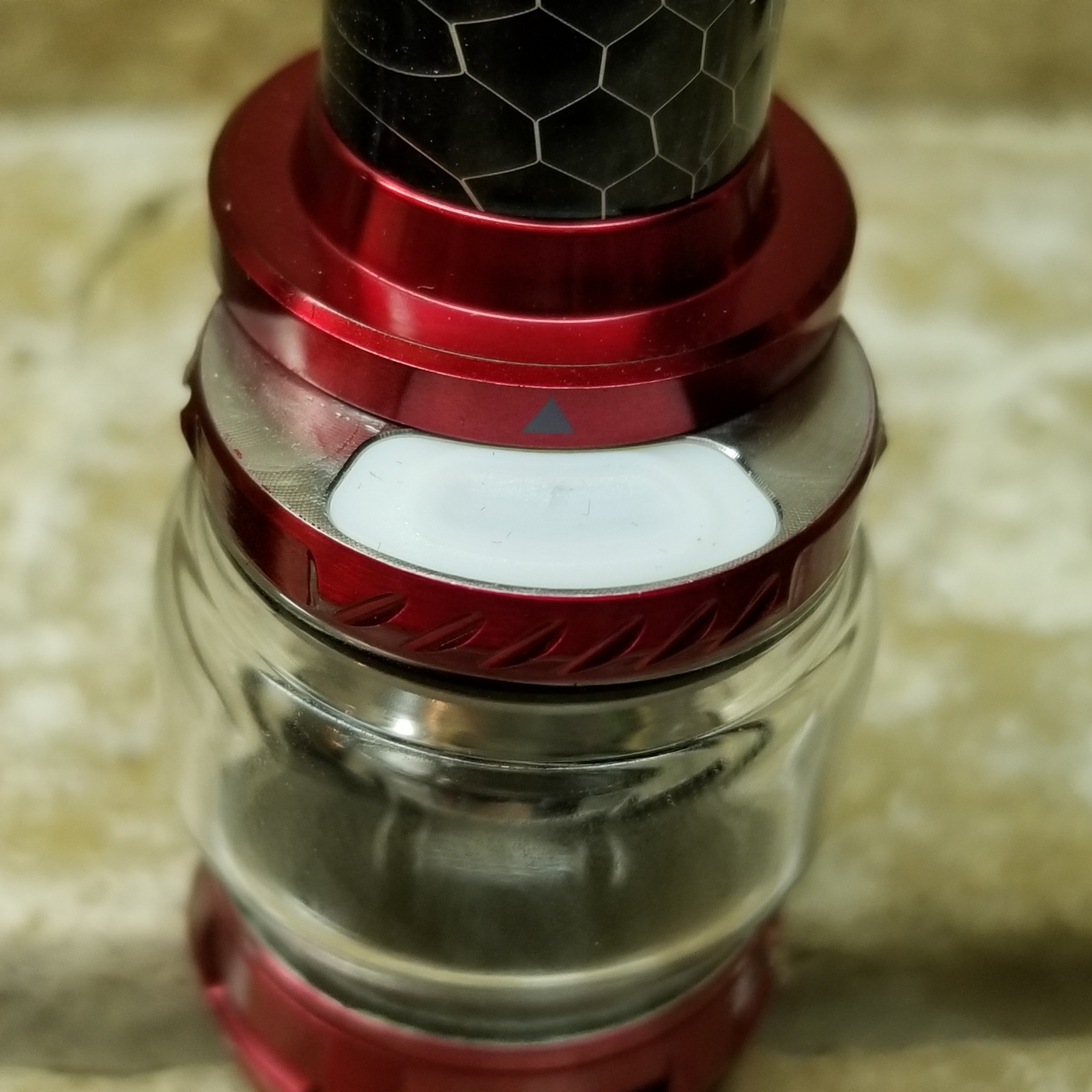 Yes, there is actually a slit there you pierce with your juice bottle, get your mind out of the gutter.

Luckily they include a open version so you can replace it, did that on my second refill. Still not a huge opening and if you are using one of those twist top bottles to fill it can get messy. 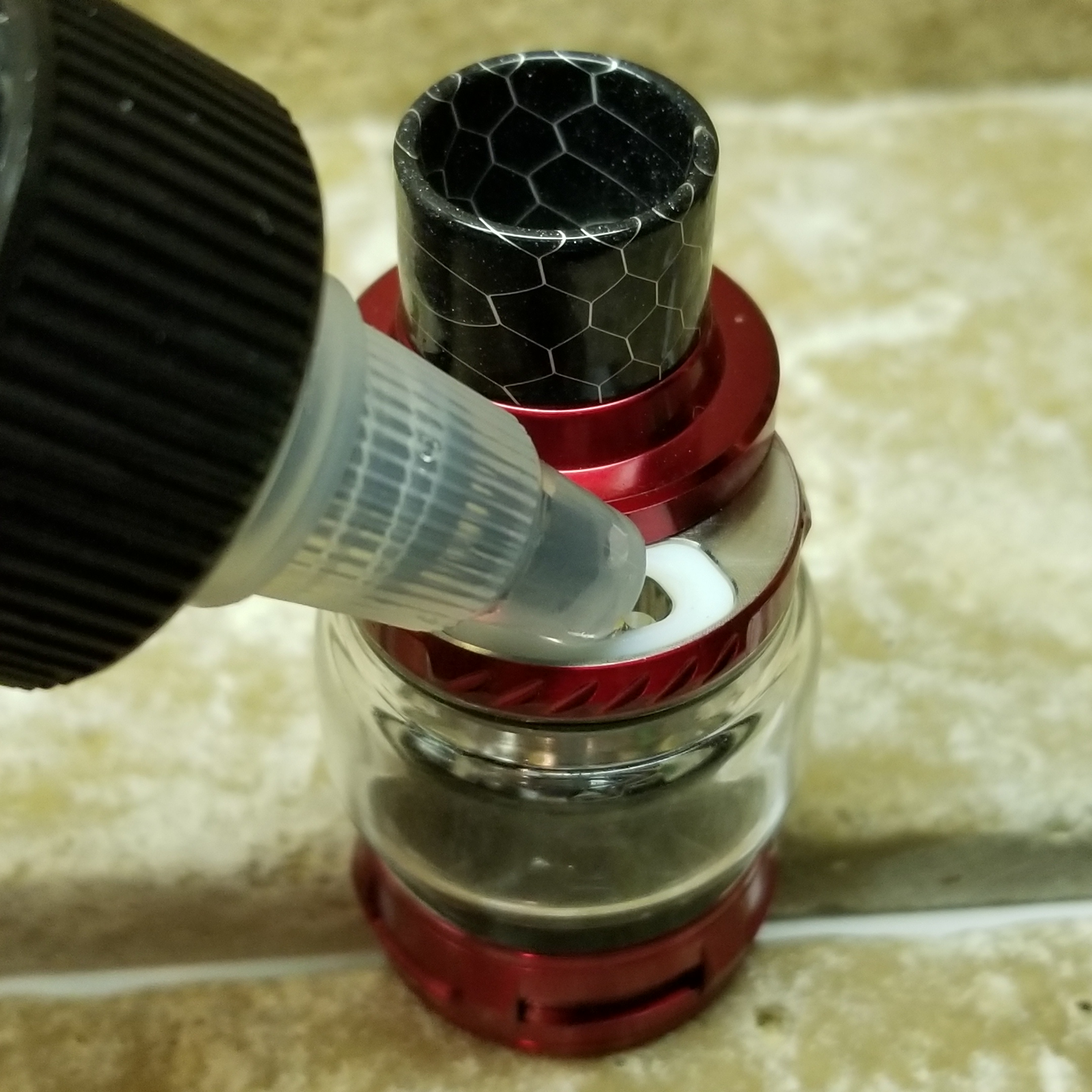 I generally like most Eleaf coils with some exceptions, I find there coils to offer good life and flavor for the most part. I was excited to hear they were coming out with mesh…errrrr, they call them Net coils and a multi hole coil.

I have to say the multi hole coil was a disappointment, quick ramp up time sure but the wicking didn’t want to keep up. Rated at 70 to 80 watts, sure, maybe if I was taking 2 second hits and then waiting a minute of 2 for my next short hit. For me it was bearable around 50 to 60 watts max, lower if I was chain vaping and it was easy to get a nasty dry hit. Flavor wasn’t all that great either, for me the HW-M coil was a disappointment and not rated accurately.

I almost wonder if Eleaf just has Joytech make there coils now? I have never been a fan of Joytech coils but Eleaf seemed to be the golden child of the family when it came to coils. These coils reminded me a lot of the Joytech coils I had tried which is to say they sucked unless you like vaping at lower watts and muted flavor. I went ahead and dropped in an Eleaf HW1 and later a HW1-C in the ELLO VATE, much better and the flavor has returned, back to drawing board on these mesh coils Eleaf.

Not a glowing review, that’s for sure but the Pico S is a decent power only mod, TC sucks though. If the looks are your cup of tea and your a Pico fan then have at it, it is a good power mode mod. I was actually looking forward to this as they fixed some things I didn’t like in the previous Pico’s but the more time I spent with it the more frustrated I became. Mostly due to the TC performance and having to get a rag to take the battery tube off.

The ELLO VATE is a fine tank but the coils are straight garbage, I am enjoying it a lot more with older Eleaf coils. I hope this isn’t a sign of things to come with Eleaf, they have always made decent to great coils in the past, these 2 are not that though.

I do want to thank www.eleafus.com for sending me the Eleaf iStick Pico S with ELLO VATE kit, you can find it here: https://www.eleafus.com/istick-pico-s-with-ello-vate-no-battery.html

These coils look like the ones from the Wotofo Flow Pro Subtank. They called them mesh-like.
It is like a sheet they punch holes in instead of strands of wire that you see with mesh.
The Wotofo coils were good though albeit very expensive.

but dammit if I am not a long winded bastard.

It is hard though to keep reviews short. You do want to cover all bases. Well, at least as much as possible and then you start shaving things off because you don’t want to bore the crap out of people.
At least that’s what I do

I have tried some other mesh like coils with the holes punched through with varying degrees of success, the best being the Falcon coils. Never tried the Wotofo version but thanks for the heads up.

Yeah, kit reviews are the toughest to keep short, you are basically reviewing 2 products in one review. I like reviews that cover the bases that are important to me so I try to do the same, can get long winded at times.

Thank you for the feedback, much appreciated

Great evaluation Mjag!! Thanks for the review Man!!

Thank you Eddie, really appreciate it

Man, you went through that one with a fine tooth comb. Great review!

I did try taking it apart but when I got to a certain point I thought oh oh, might not be able to put it back together again. Bummed when that happens, I like to look at the insides.