Dovpo have impressed ever since entering the vaping market and really haven’t made a false move, just recently they have been hitting it out of the ball park with some very successful collaborations that have seen impressive build quality. The Blotto Mini RTA as the name suggests is a smaller version of the Blotto RTA and of course another collaboration with Sam Parsons AKA The Vaping Bogan. The Blotto Mini like it’s bigger sibling has been designed for flavour whether doing a single or dual build offering honeycomb style airflow inlets and 242 degree air coverage (don’t forget about the extra 2 degrees, very important lmao).

It comes with a 2ml straight glass installed keeping it nicely TPD compliant but then included is both a 4ml bubble glass and 4ml PCTG bubble section. The original created a lot of hype which many after buying it saying it lived up to that hype so let’s see how the smaller version fairs! 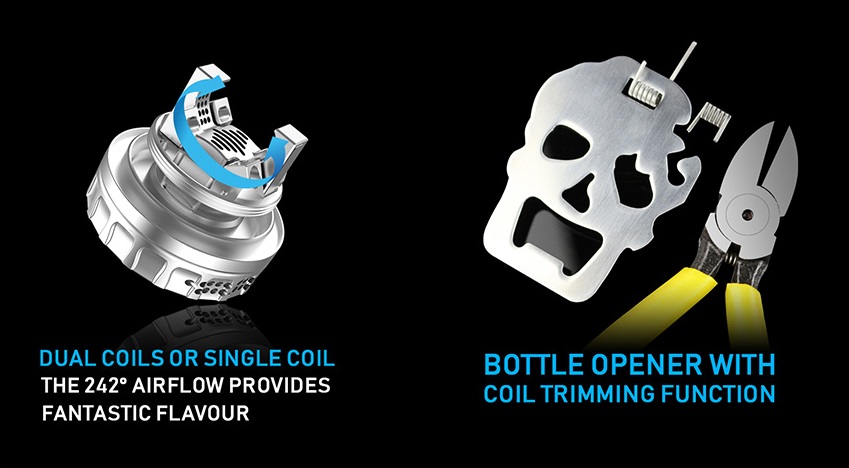 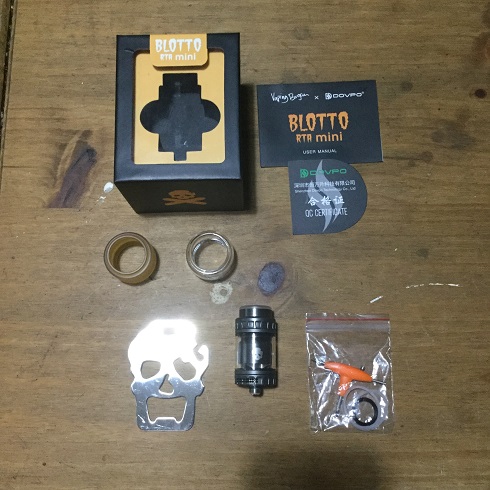 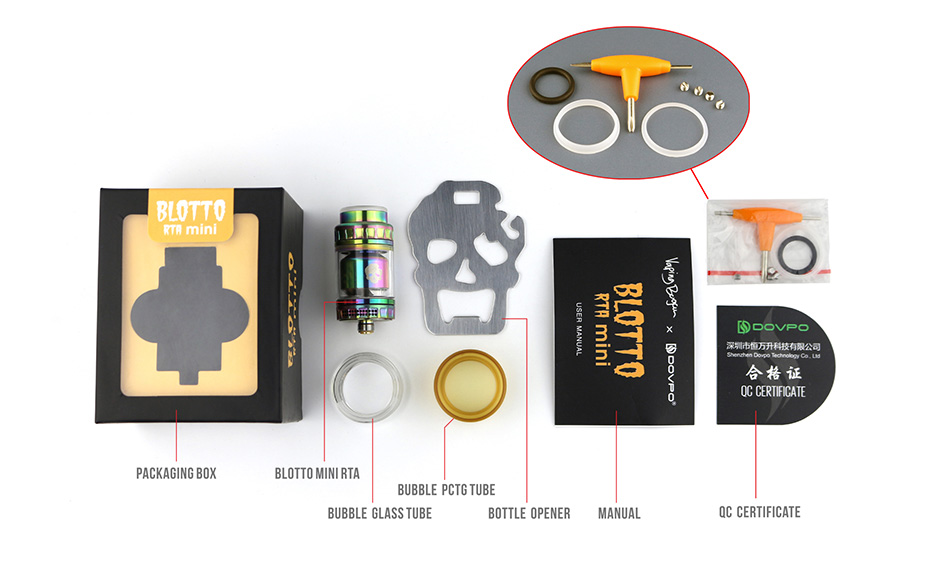 The Blotto Mini RTA comes in a cardboard box with clear plastic top so you can see the RTA before opening, there is plenty of branding as well as all the usual specs etc on the packaging. The Blotto Mini comes in five different colour options, i received the Gun Metal version, the colour options are Gun Metal, Black, Silver, Blue or Rainbow. The Drip tip is a goon fitting 810 and particularly nice looking with a metallic Silver band around it and frosted appearance to it’s top.

I love the appearance of the Blotto Mini which is identical to the original both having a very distinctive look, both top and base look just like a bottle cap. The base has dual airflow which is two rows of many small inlet holes (referred to as honeycomb) and the Vaping Bogan skull is visible on the chamber. The Blotto comes pre-installed with a 2ml straight glass and moving to the base we have branding, safety marks and a Gold plated protruding 510. Overall the build quality is very good, clean and has superb threading. 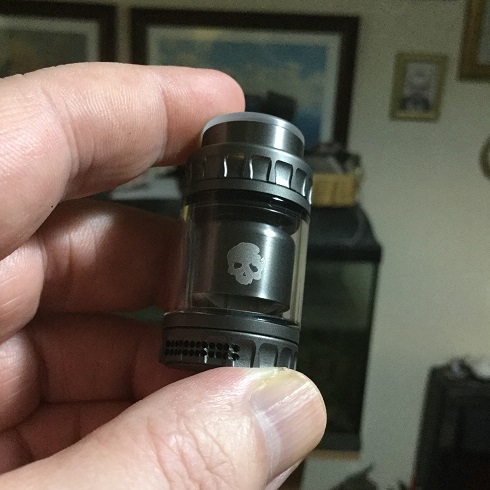 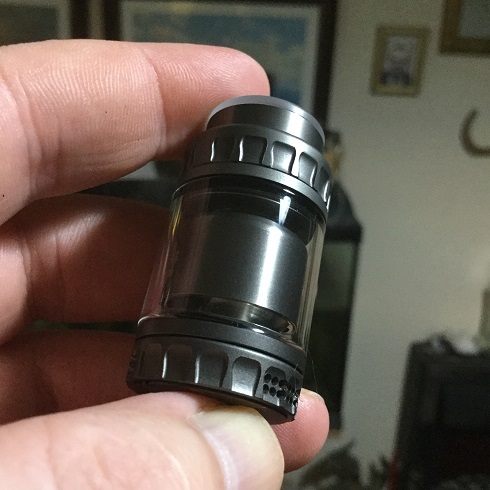 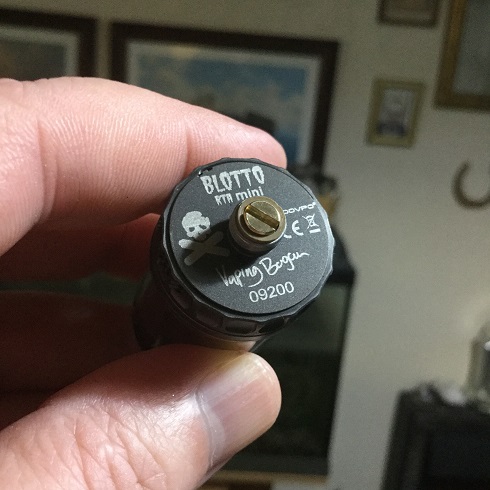 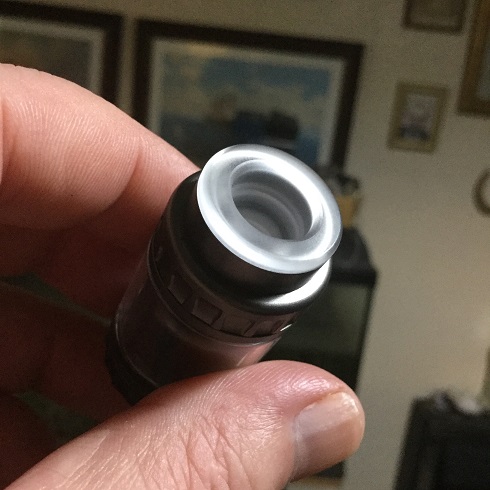 It’s Various Parts and What You Receive

Starting up top we have a very nice looking 810 drip tip but it is low profile which won’t suit everybody and no other drip tip or 510 adaptor is included, of course you can fit your own. We then have the bottle cap top-cap followed by the one piece plate with juice ports and chamber. This is followed by the base section with floating deck, we have a standard, Gold plated, protruding 510 pin installed. The chamber screws over the deck and your glass section gets secured and sealed top and bottom by o-rings. Pre-installed is a straight glass which has a 2ml capacity to meet TPD regulations and also included is two 4ml capacity bubble sections, one glass and the other PCTG. Also to go along with the “being blottoed” theme you receive a Bogan skull bottle opener which doubles up as a coil lead cutting guide.

Although it comes with 2 bubble sections as well as the straight glass overall i’m not impressed with what you receive. Only 3 o-rings, 4 spare grub screws and a T-piece and that’s it, no different option drip tip, no 510 adaptor and no coils and cotton! 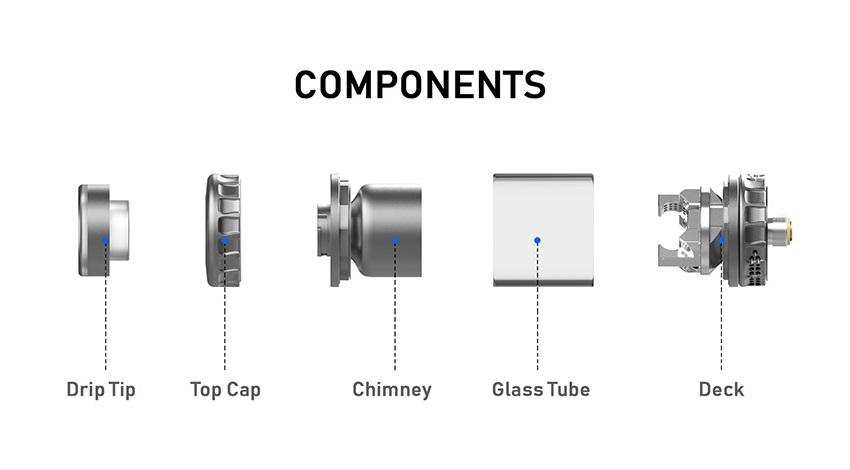 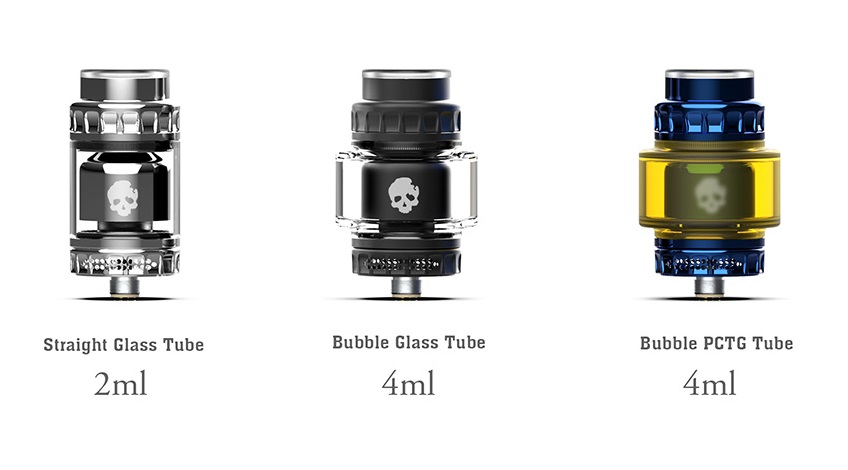 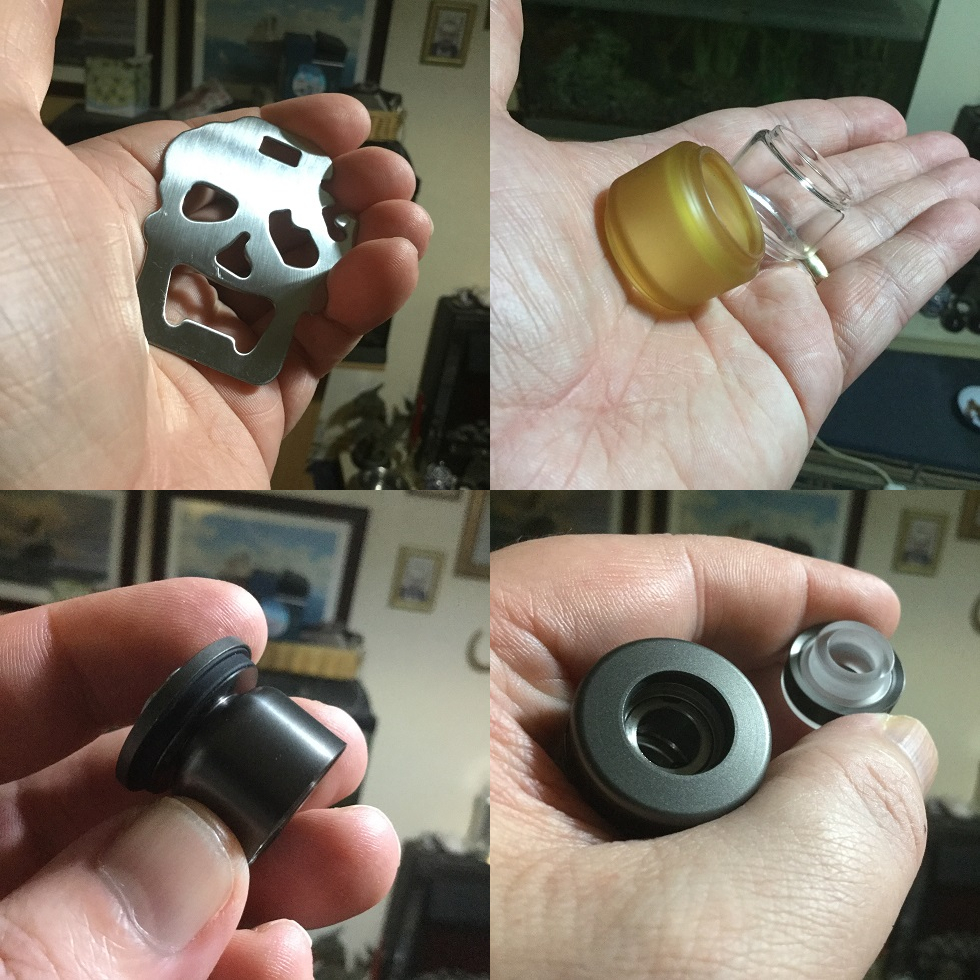 The Blotto Mini like the original employs a bayonet style fitting for the top-cap like we have seen on many other RTA’s including the various Zeus RTA’s. I really like this method, just a quarter turn and the top-cap is off. We have a metal plate with 2 large kidney shaped fill ports so any bottles will be suitable and filling is quick and mess free. When securing the top-cap after filling, again it is just quarter of a turn. 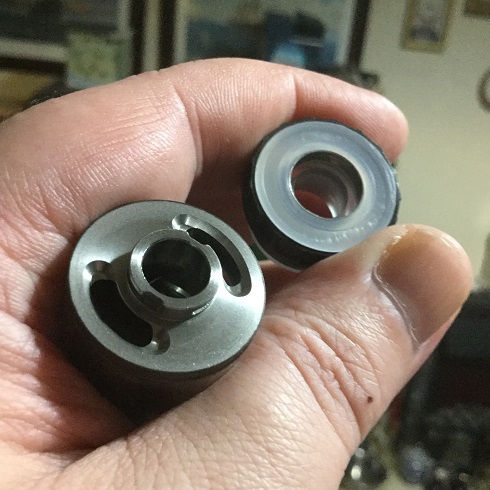 The airflow is the same as on the original but i will run through it again. The inlets can be found on the base, it’s like having bottom dual cyclops accept on the Blotto instead of wide open slots we have honeycomb airflow, 2 rows comprising of a total of 26 holes either side. The airflow control ring has a stopper and when adjusting it’s the only poor quality i found with the RTA as it’s very sketchy, it doesn’t move very smoothly at all.

The air enters through the described honeycomb airflow inlets and then enters the deck directly underneath where your coil/coils will be positioned. We have grill style outlets (narrow slots) and then either side we have ramps which curve to match the coil/coils outside contour, on these ramps we have more honeycomb air outlets. The airflow is described as a “242° direct to coil Airflow system”, lol i’m not sure how scientific the process was to measure 242 degrees but let’s just say your coil/coils are going to get plenty of air coverage (not to be confused with plenty of air).

Looking inside the chamber it is very domed and the large post/airflow ramp sections will reduce it further, so all the ingredients are there to get good flavour, you just need to add your build. 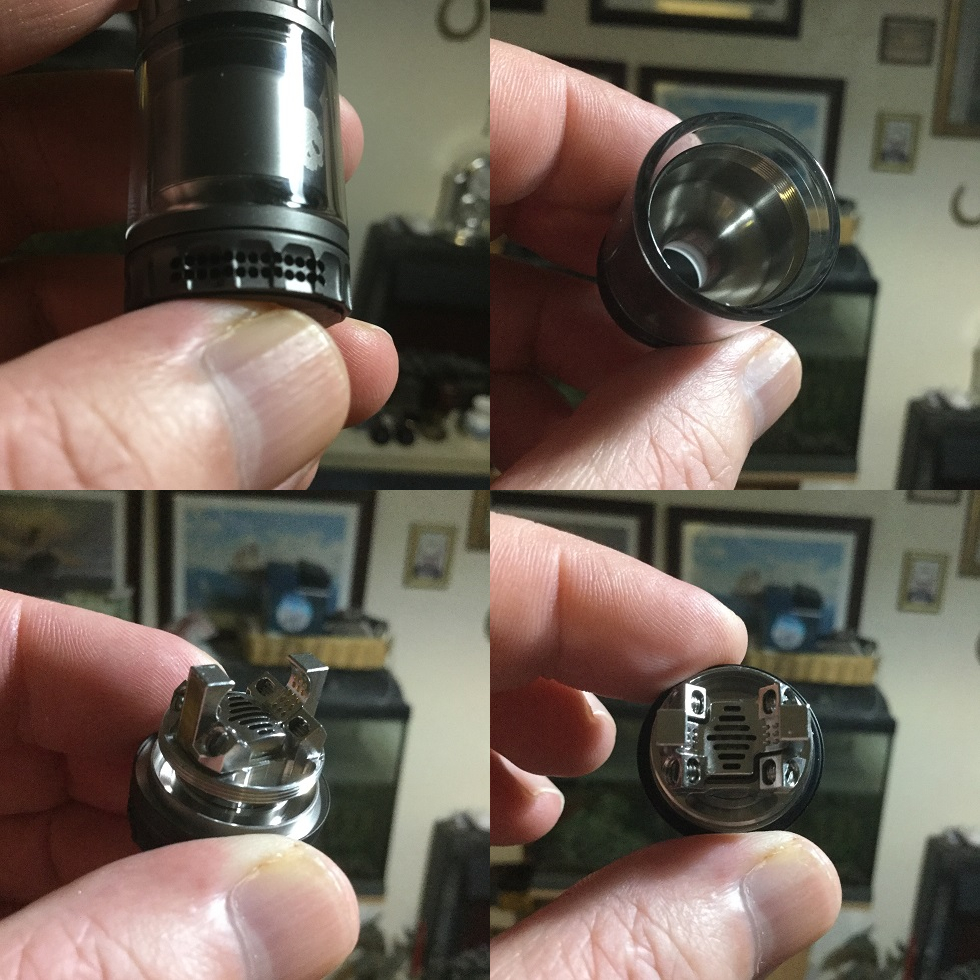 The Deck and Build

We have a floating deck on the Blotto Mini and despite the outside parameters of the tank being smaller the deck it’self is identical including it’s diameter to the original. It’s not quite what i would call a postless deck but your coil leads are fitted much the same at just a slight angle rather than straight down with the screws also being tightened at a slight angle. We have 2 large post sections that include the ramp airflow structures which face each other and each section is split between negative and positive so both leads get fitted the same way. The grub screws are flatheads which are my least favourite as i can find them fiddly and would of much preferred hex heads.

Because the coils get fitted similar to on a postless deck the coil leads need pre-cutting because of this and a real lack of space (when doing a dual build) i really wouldn’t say this was a deck suitable for a new builder, some reviewers will say it is an easy build but they are forgetting they are use to building.

I did two builds, a dual coil using a pair of 3.0ID KA1 Aliens which is the build pictured and a single build using a 3.5ID KA1 Alien. I do prefer 2.5ID when doing a dual build on the original so the same will apply to the Mini but i couldn’t be arsed to wind a couple of coils and i only have micro coils in 2.5ID which are pre-wound so used the mentioned 3.0ID Aliens, although i used a 3.5ID coil for the single build 4.0ID also works very well.

The supplied bottle opener doubles up as a lead cutting guide to cut your leads the correct length (dual build), but as i personally used the sought of coil cutting guide that gets included with quite a few RTA’s and RDA’s i just opened a bottle of beer with it instead, Cheers!! I cut my leads to 5mm with the dual build and 6mm with my single, of course what length you need your leads will be not just dependant on whether you do a dual or single build but also what ID your coil/coils are so you need to use your own judgement.

Wicking is easy (i love the floating GTA style decks), we have an outer containment rail so simply poke the end/ ends of your cotton into the wicking channels and let gravity once the cotton is saturated do the rest, i found the Blotto to be very forgiving when it came to wicking! 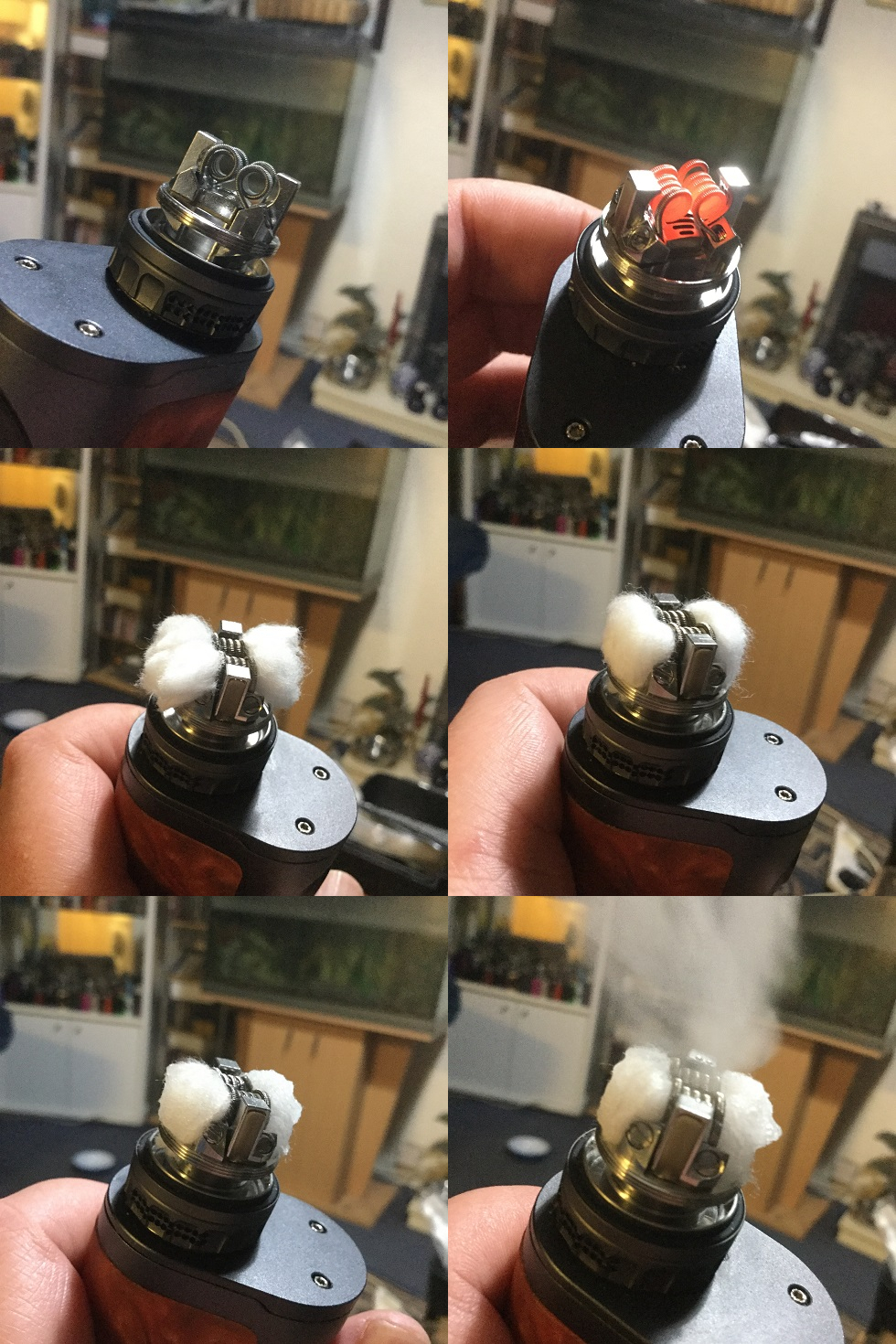 I know on forums some say they get leaking from the Blotto and some say not. I don’t wick it in any special way but below is a picture of the original on top of one of my stabwood mods where it has been full of liquid for 3 months without a drop of leakage so if you are getting leaking from either the original or Mini persevere because i don’t mean to offend but the picture below proves it’s not the RTA! 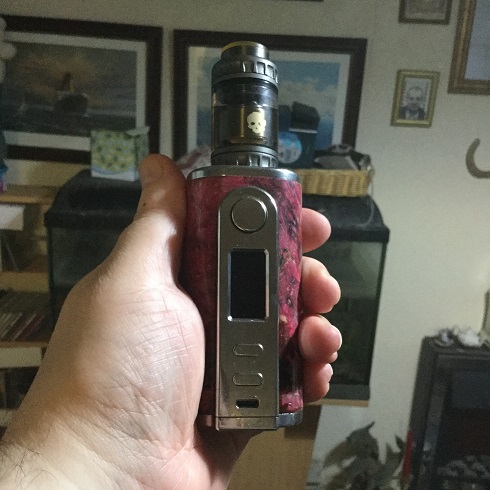 My Experience Using The Blotto Mini And Thoughts!

If you like the original you will love this if you didn’t then you won’t as it’s only the outside parameters that have changed and the airflow and deck remains exactly the same so just like the original the Blotto Mini is equally happy with either a single or dual build.

The airflow is really smooth as on the original and it gives the same semi restrictive and restricted direct lung draws so like the original not an open draw with bags of air. The build isn’t difficult although a little cramped for room if doing a dual 3.0ID build and possibly not the best for someone new to building. Wicking i found straightforward and have never had leaking issues with either the original or while testing the Mini but then some have said they can get leaking so maybe it just suits the way i wick.

When i reviewed the original i sat on the fence somewhat as i couldn’t deny it gave very good flavour but felt it was slightly over-hyped as i believe my words were “it doesn’t give me the Wow factor” like a couple of other RTA’s like the Reload for example but it was pretty damn close.

The Mini has breached that gap and in my opinion is now a match for the Reload! Someone did point out to me a Youtube reviewer who i’m not going to name said it was impossible for the Mini to give better flavour than the original because it’s only the outside parameters that have changed! But those smaller parameters brings less travel for the air between the inlets and deck outlets which can only improve it’s effectiveness and the chimney is much shorter bringing the build much closer to the drip tip, these two changes has improved flavour from what i am experiencing and both are so obvious when looking at the two versions side by side so why he said that has me baffled!

I rarely actually recommend products and tend to just write my experience and people can take from it what they like, that was the case with the original Blotto but i do occasionally like a product so much i break this rule and the Mini is one of these occasions, it’s a really good flavour RTA! 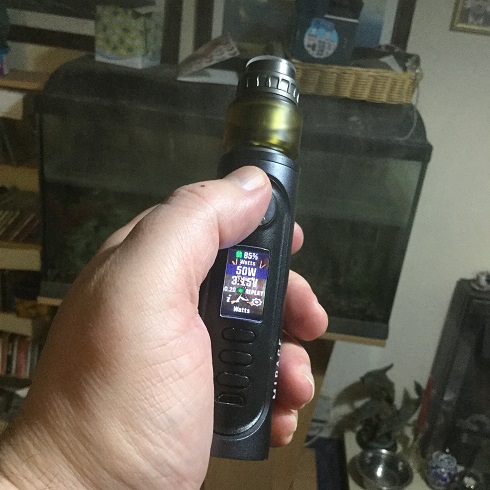 Not suitable for those that like plenty of air (much more restricted than most DL RTA’s)
No coils or cotton included
No 510 adaptor or alternative drip-tip included
Not really to be recommended to someone new to building (cramped space and need to pre-cut leads)
Would of preferred hex screws
Limited to 3.0ID coils for dual build (and even that’s quite cramped 2.5ID is much better)
Airflow control ring movement a bit sketchy

I would once again like to thank Hedy from Dovpo for supplying the Blotto Mini RTA for the purpose of this review, thanks for reading and stay safe!

Haven’t got this one, but I do love the original, and you know what else…I didn’t know that’s what the little slot was for on the top of the bottle opener

thanks for sharing it

Neither Blottos worked well for me in dual set up. Far better 4mm single coil for my style. And that slot in the bottle opener was perfect for cutting the legs the wrong length

Great review, and I was ALL about to comment on the kick ass bottle opener coil trimming tool thingie, …