Do I need to worry about gases when using SS / Ti Coils?

I have some Stainless Steel 316L 26ga 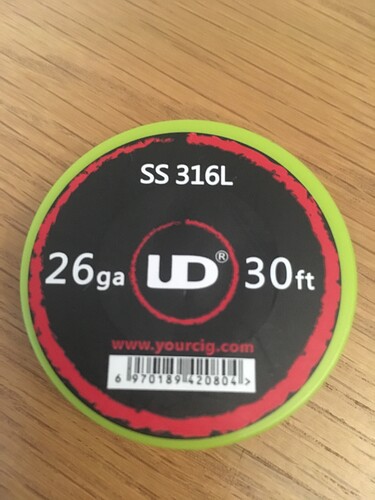 What do I need to be taking into consideration when using it for my coils in power mode please.

I got a build in, tastes funny to me or I’m just worrying about toxins…

Yeah I dry burned, it’s starting to taste a lot better as I use it and I know exactly what you mean about the metallic taste from Kanthal, just pure flavour with SS

I use SS in power mode all the time. No problems here

Only thing to watch is to glow them dry no more than a dull cherry. Get 'em too hot and the metal properties can change for the worse. For juiced vaping though, no worries.

Well, except for the insanely low resistance compared to A1. I see that would be a nice place for a Modfather series build on yours, to get the wrap count in check. I’ve always had difficulty keeping the center cotton wet with more than 5-7 wraps. I’ve used SS extensively; the cleanest tasting wire I’ve found so far.

Thanks guys, so am i right in saying, don’t glow them too hot and I’ll be fine?

Correct. And that would pertain to cleaning or mounting them when there’s no wick. I’m sure no one could tolerate a draw hot enough to glow the coils anyway.

Outside of that, any initial taste is probably due to the cotton breaking in IMO.

I typically only dry burn a used coil once, and then discard. They’re cheap when you “roll your own”.

And, those pretty colors last one cotton cycle until they foul like any other coil. Look good for a photo though.

I was politely trying to say that that’s how I know (or think rather) that I’ve not gotten hot enough to affect the chemical structure of SS.
To my line of thinking, once the metal starts changing colors, you’re starting to affect the strength (ie: chemical composition) of the element(s) you’re working with. At least, that’s what they taught/I remember from welding classes.

@Grubby IMO, I agree with the others that have hinted at “a low, slow glow is sufficient” (in essence).

Everything I have read that was credible indicates that you need to reach one hell of a temperature to have the coil decompose and give off toxins. Having said that, I’m a poor test case as I have always had better luck with flavor using spaced coils. I also don’t clean coils by burning them. Installing a new coil only takes a few minutes and a few cents to achieve. I know it is possible to degrade a coil with a mod as when I was trying to figure out how to measure the temperature of a coil I burnt a couple in half. Burnt, melted, whatever, I was able to get them to open up mid coil. My bottom line has always been that it has to be better than setting shit on fire and sucking in smoke. That’s just a ridiculous thing to do if you think about it.

Aside from toxins, my Ogrely friend, I’ve also read that it doesn’t take much to vaporize the stainless coating off the wire, leading to rapid decomposition and corrosion.

I’m not willing to test that, though.

I had a problem with far too many wraps killing the vape when I used SS more, having to chase the Ohms due to the low resistance.

Probably opposite to what most people want.

Stainless steel shouldn’t be a coating… I wouldn’t knowingly use, nor recommend using any that’s not solid SS.

Coating… There’s a scary thought.
One more reason why vendor and sourcing matters.

Reading things off the net can be scary too. I was careful not to imply that I was guaranteeing those words! Just thought it may merit a mention.

If you are using your coils at 30 watts to check for hot spots when you first build then you might be burning right through the color phase, with SS coils that I vape in the 55-65 watt range I use 10 watts in low pulses to bring out color, making it just barely glow and then letting it cool before doing it again, but that’s what makes installing a new coil fun for me lol ymmv.

I felt the same way about 26g until I got the pulse 24 and the mech pulse squonker, 5/6 wrap 26g SS316L duel coil is the only way I have been able to get a decent vape off of it, the pulse 24 has too much airflow for my taste.

The only use I have found for it is with the pulse 24, it’s so airy that I have to use .2 ohm and lower on the pulse mech mod or I don’t get a decent hit, the voltage drop on the pulse mod plays into that too though. It’s also my fishing setup, when I go fishing I run a higher wattage setup so I can grab a couple puffs and get back to casting lol. I use 28g SS316L in some variation in every other build I have except for staple coils.