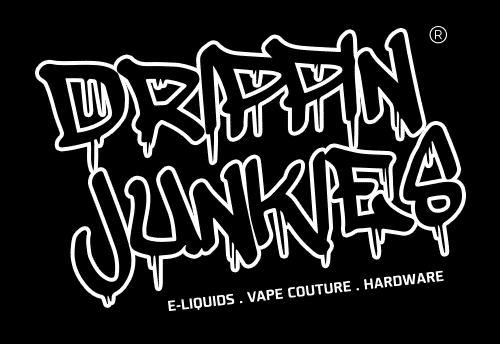 Drippin’ Junkies are a family run business based in Ware near Manchester England and have grown to have global reach! Like most family run e-liquid businesses the emphasis is on quality not quantity so despite being established since 2016 their portfolio is just a few ranges.

Their ranges up until the Bomba Range have been 50ml shortfills but with this new range they have gone big giving you more bang for your buck being 100ml shortfills although 10ml sample bottles are available so you can first check if you like the flavours!

Disclaimer: These next segments are copied straight from their website so are not my words but give further insight into the company!

Established in 2016 as a family run business, Drippin Junkies has grown into an internationally recognised brand. We focus on only using quality sourced ingredients with a specific eye on safe vaping for our customers.

THE HOME OF WAT DA FLUFF

Our story began in 2016, when we launched Wat Da Fluff. This e liquid came in a 30ml shortfill and has helped a large number of people kick the tobacco habit. As a company we have always strived to help others switch from smoking to vaping, by using only the best quality ingredients to create the most tasty e liquids. 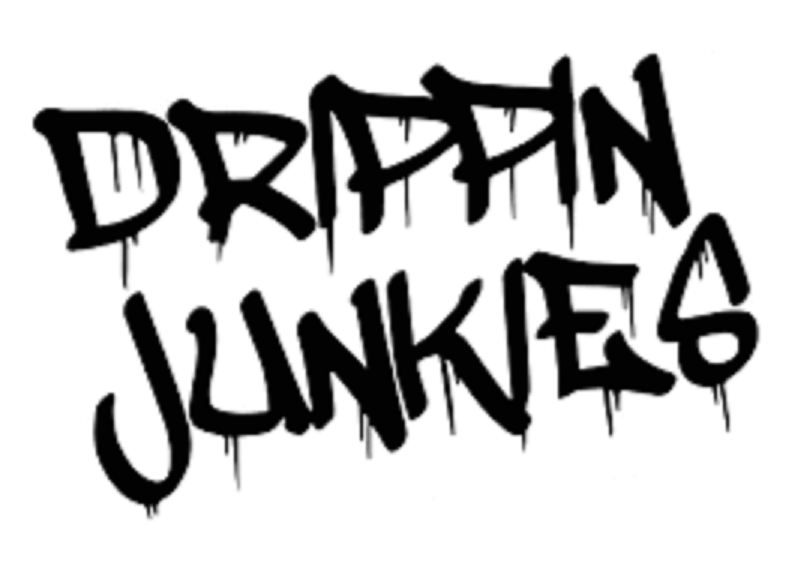 The Bomba Juice Range are 30PG/70VG 100ml shortfills that consists of the following flavours: 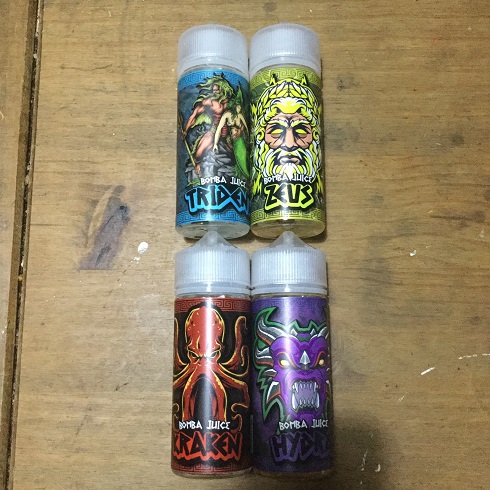 You know how it works you can order just 0mg juice or also have the choice of different nicotine levels where room is left in the bottle for the addition of the supplied nic shots to give the nicotine level ordered. The PG/VG ratio and strength of the flavourings are taking into account so whatever nicotine strength you order the end product tastes the same and has the same 30PG/70VG ratio!

The 4 Flavours I Received Were: 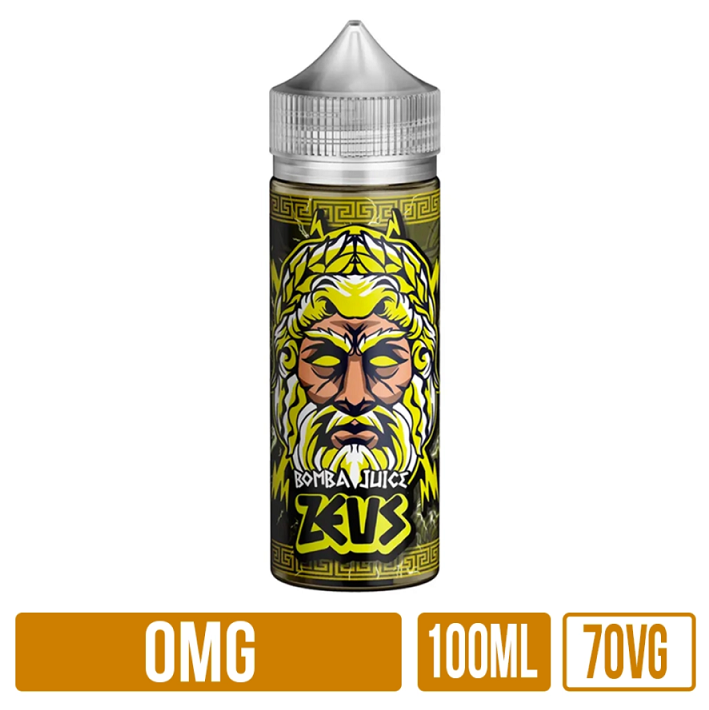 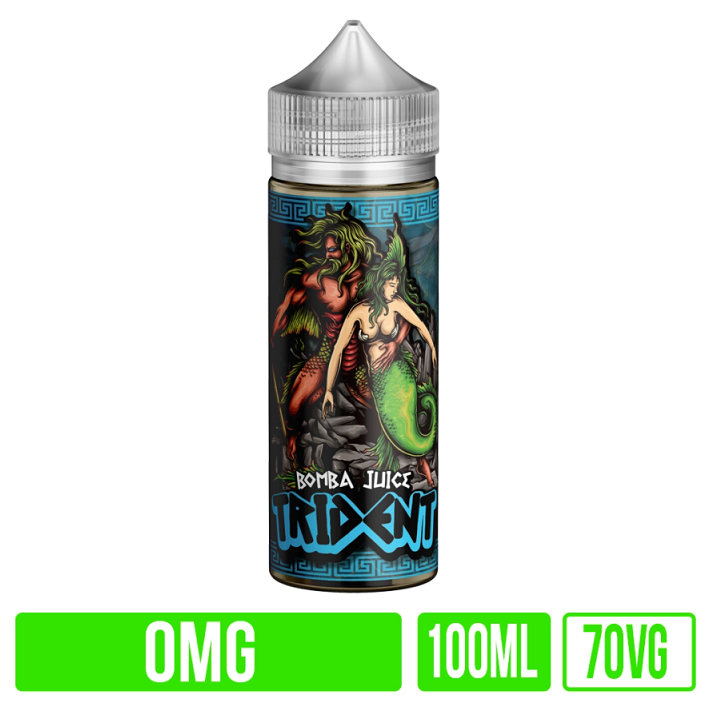 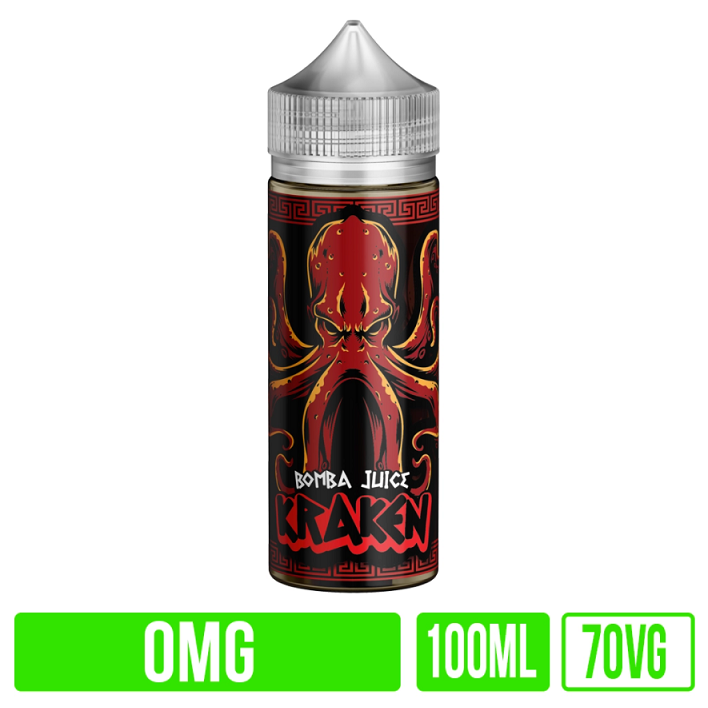 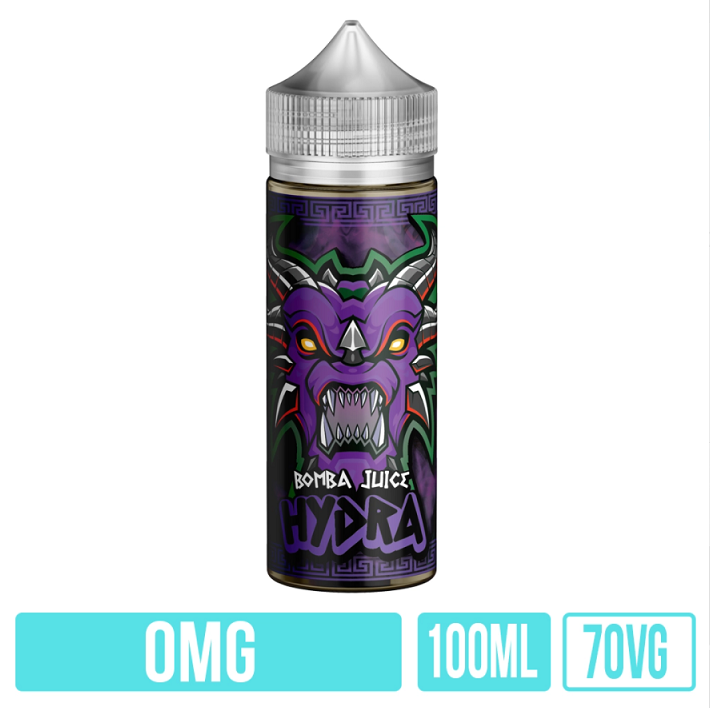 Just to mention that the missing flavour Medusa is a Black Grape and Candy Apple affair that sounds rather nice!

On arrival I added the supplied nic shots to each flavour making them all 3mg in strength and left for two weeks to steep before testing. I tested all flavours on 3 identical set-ups to keep consistent testing conditions re-wicking between flavours apart from the SX Nano where i used a fresh Disk coil for each flavour but won’t bin them as they will be fine to use in future.

The cotton used in both the Bushido RDA and Vertex RTA was JellyFish. 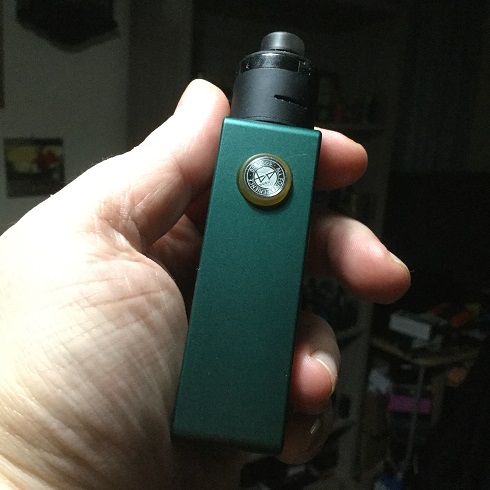 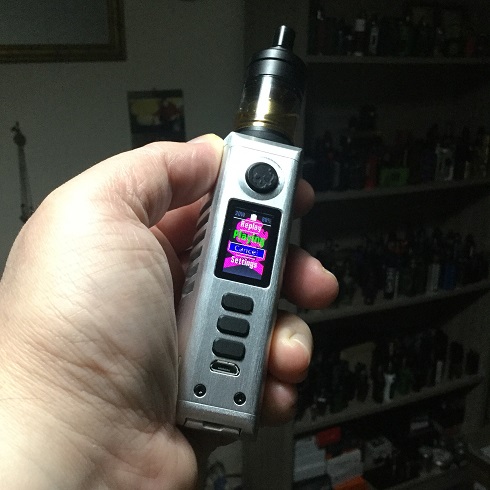 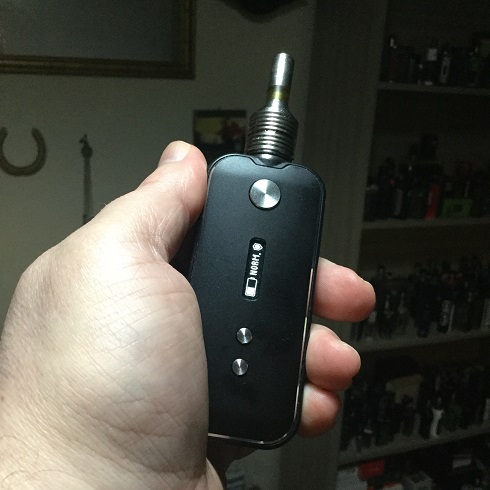 The pictures are of the equipment used but not at the time of testing!

My Experience Using The Flavours: 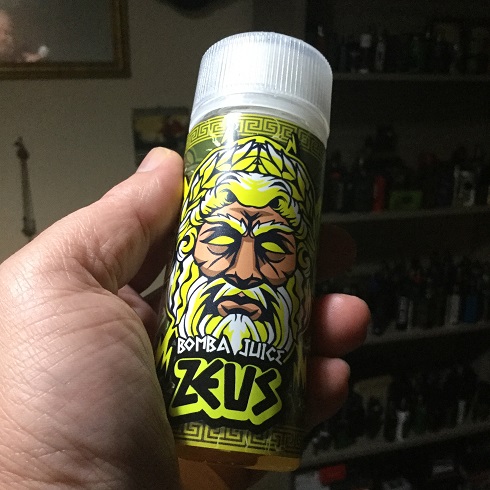 When smelling the open bottle this smells sweet but not a cotton candy sweet much more syrupy, also a hint of vanilla and custard undertone with buttery notes also detected.

On the inhale this hits me with a sweet sugary syrup and a slight buttery note sitting in the background, a velvety custard is definitely present even if quite muted at this stage. On the exhale the sweet remains but now that buttery note reveals itself as a buttery pastry entwined within the syrup giving it layers of syrup and flaky pastry, the custard is much more evident now and the vanilla note i smelt when smelling the open bottle for the first time becomes evident while vaping. The taste left in the mouth see’s the pastry all but vanish leaving a sweet velvety custard taste. This is a very well crafted e-liquid which i could vape regular but maybe just a little too sweet for an ADV! 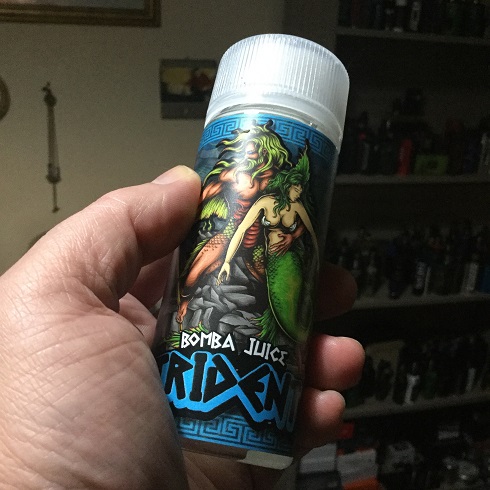 When smelling the open bottle there is no mistaking the punchy Pineapple and Ripe Mango but also some summery mixed berries in the background making this a bit more interesting than your usual Tropical Punch!

This is basically a Tropical Punch with a summer berries twist which emerges on the exhale. The balance between the Pineapple and Ripe Mango is spot on and on the exhale we get a summer berries medley emerge but only evident enough to compliment the Pineapple and Mango without ever threatening this flavours Tropical credentials. The aftertaste gives a touch of Pineapple with Sweet Mango lingering! Very nice!! I could see this as an ADV, an alternative on a summers day to a juice with coolant, this is very refreshing! 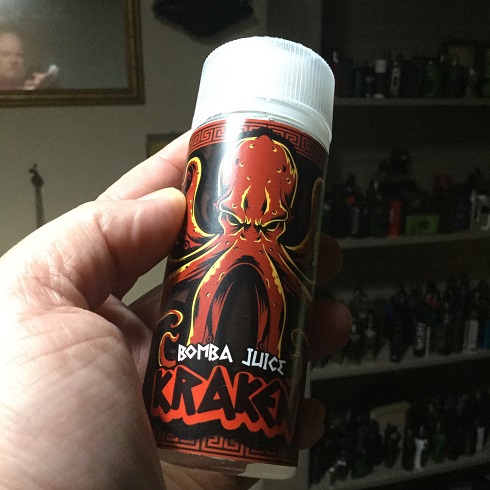 Smelling the open bottle reveals a refreshing Watermelon along with a sweet flavour i struggled to identify. Somewhere between Raspberry, Strawberry and even Cucumber at times this very sweet pleasant smell intrigued me so i investigated further to find it’s Prickly Pear a member of the Cactus family. When seeing how close i was to describing the flavour i found that just about everyone describes the flavour differently, it’s unique while very familiar!

This e-liquid stays consistent on both the inhale and exhale and leaves a sweet refreshing aftertaste. Watermelon dominates throughout but the Prickly Pear contributes greatly giving this a quite unique yet very pleasant refreshing flavour! 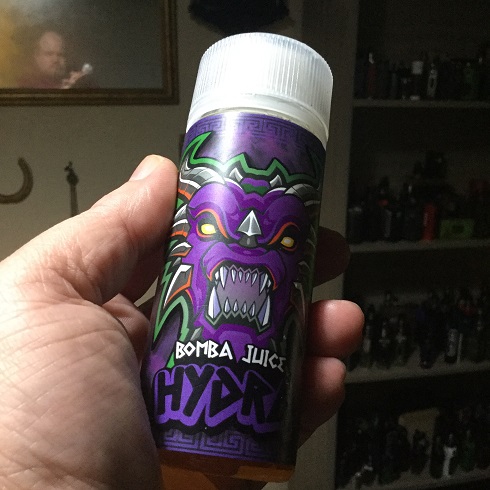 On smelling the open bottle i got a mixed berries aroma which included Blackberry and Raspberry for sure but many more, also a definite menthol cut through which filled me with dread as i am not the biggest menthol fan!

On the inhale this is a mixed berries with Blackberry the most identifiable berry but the overall flavour was very similar to Vimto my wife’s favourite drink, it has a slight menthol which is actually quite pleasant at this point. The Exhale see’s the menthol much stronger which also gives this a much more menthol dominant aftertaste, i am not that keen i must be honest but my wife loves it so a pity she isn’t marking it!

A really nice range of e-liquids, as mentioned the missing Medusa sounds a winner, Zeus and Kraken were both very nice while the pick was Trident which i found to be excellent! Not so keen on Hydra although they have nailed the Vimto flavour but just too much menthol on the exhale for someone not so keen!

I would once again like to thank Chris from Drippin’ Junkies for supplying the 4 flavours from the Bomba Range for the purpose of this review, thanks for reading and stay safe!

Nice @Timwis
The only one that looks interesting to me is the Zues as I don’t do fruit vapes. You say it is quite sweet, what sort of sweetness is it? An artificial sweetener type or more natural from the flavourings? Coil killer?

Yes, very sweet it’s a little like a thin Golden Syrup sweetness, sought of glucose! Didn’t gunk coils up like a lot of the sweet American e-liquids i have tried!