Augvape in collaboration with popular youtube reviewer Mike Vapes brings to you the Intake RTA. Augvape was kind enough to provide one free to me for this review. Just to be clear, my opinions are not bought in any way and I do not receive payment other than the free item so I will be honest in my opinion as always. 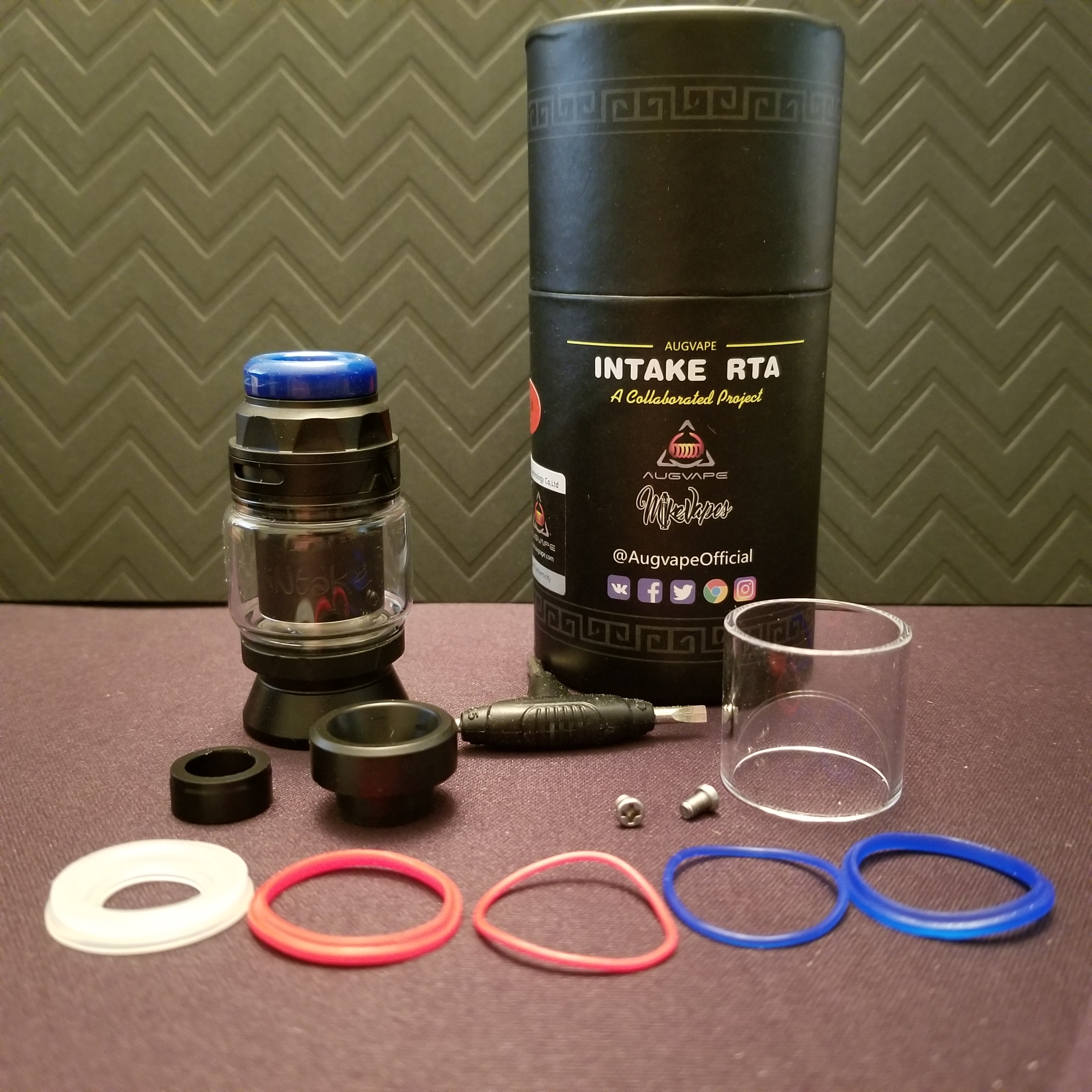 Getting to know Augvape and the Intake RTA

Augvape has been around a while, some of there products I love like the Boreas which is still a great tank. Others I have been disappointed with like the Boreas V2 which should not carry the same name. They have begun collaborations with Youtube reviewers, the Intake RTA with Mike Vapes and the new BTFC RDA with Vapnfagan, review coming soon. Looks like Augvape is upping their game and they have some really nice products coming soon as well that I saw at the ECC show.

Now as far as the Intake is concerned I have to admit it has impressive build quality and mounting your coils is easy as can be. I will get more into the builds and wicking in the next section but one of the easiest tanks out there and great for beginners or veteran vapers alike.

I got to see all the colors at the show except the purple which they did not have, the finish is stunning on all of them but the Blue IMO, more of a matte blue and there are color variations throughout. 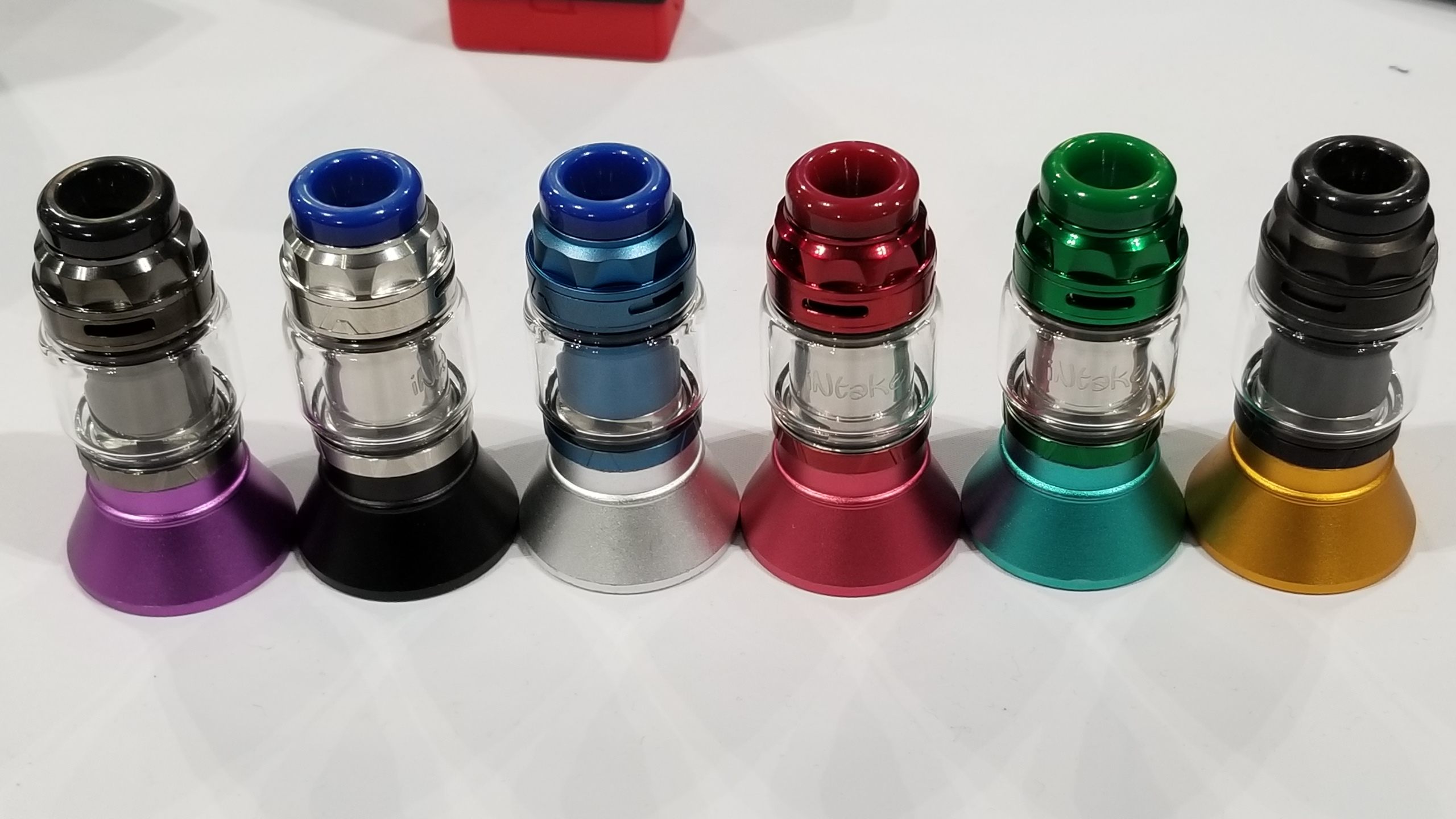 Breaking down the Intake is not as easy as I was hoping with the small base that is hard to grip with the bubble glass included, I always grab a paper towel to get a grip on it. 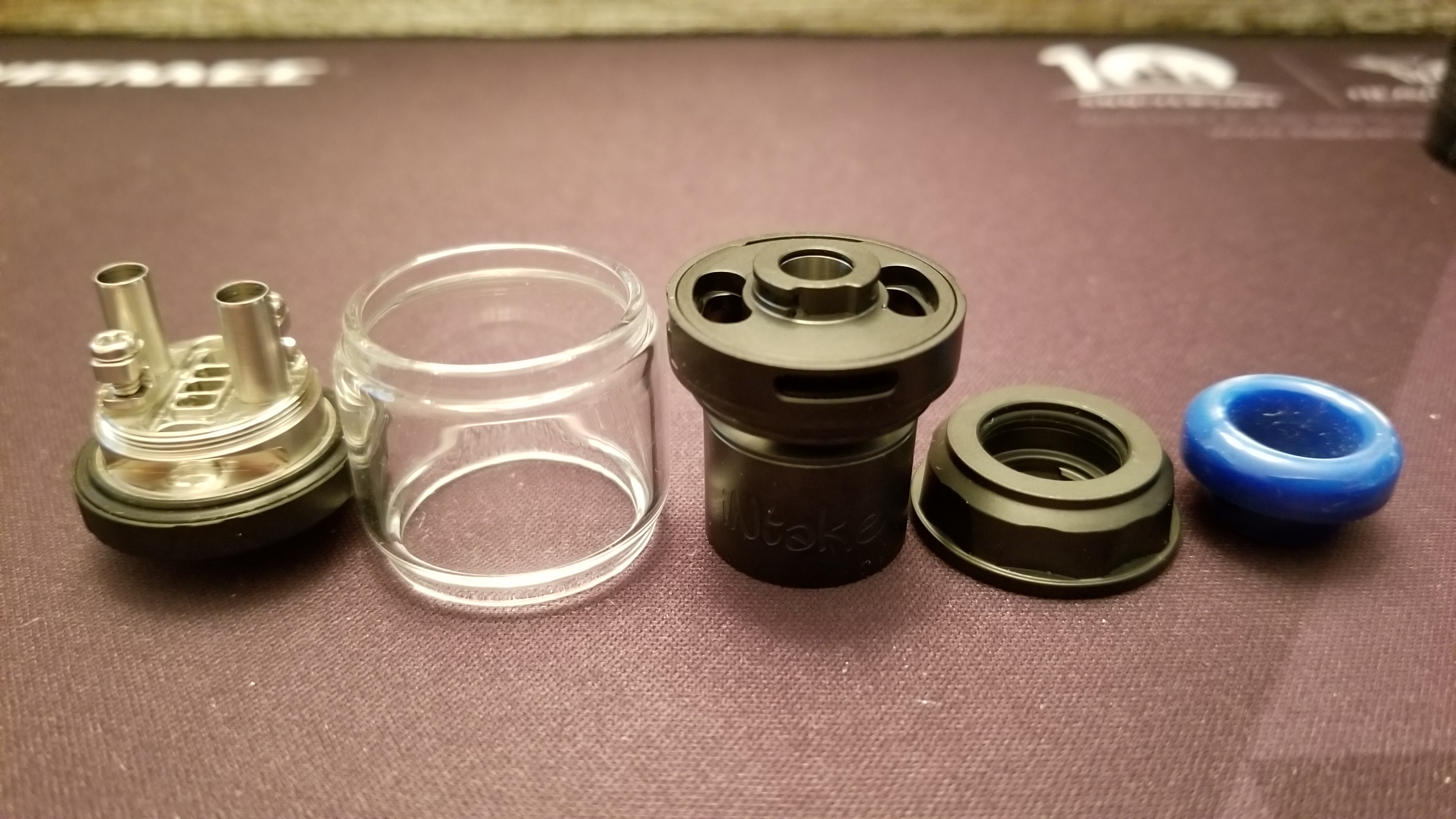 Nice build deck, not the cleanest machining but everything goes together easily and is well thought out. 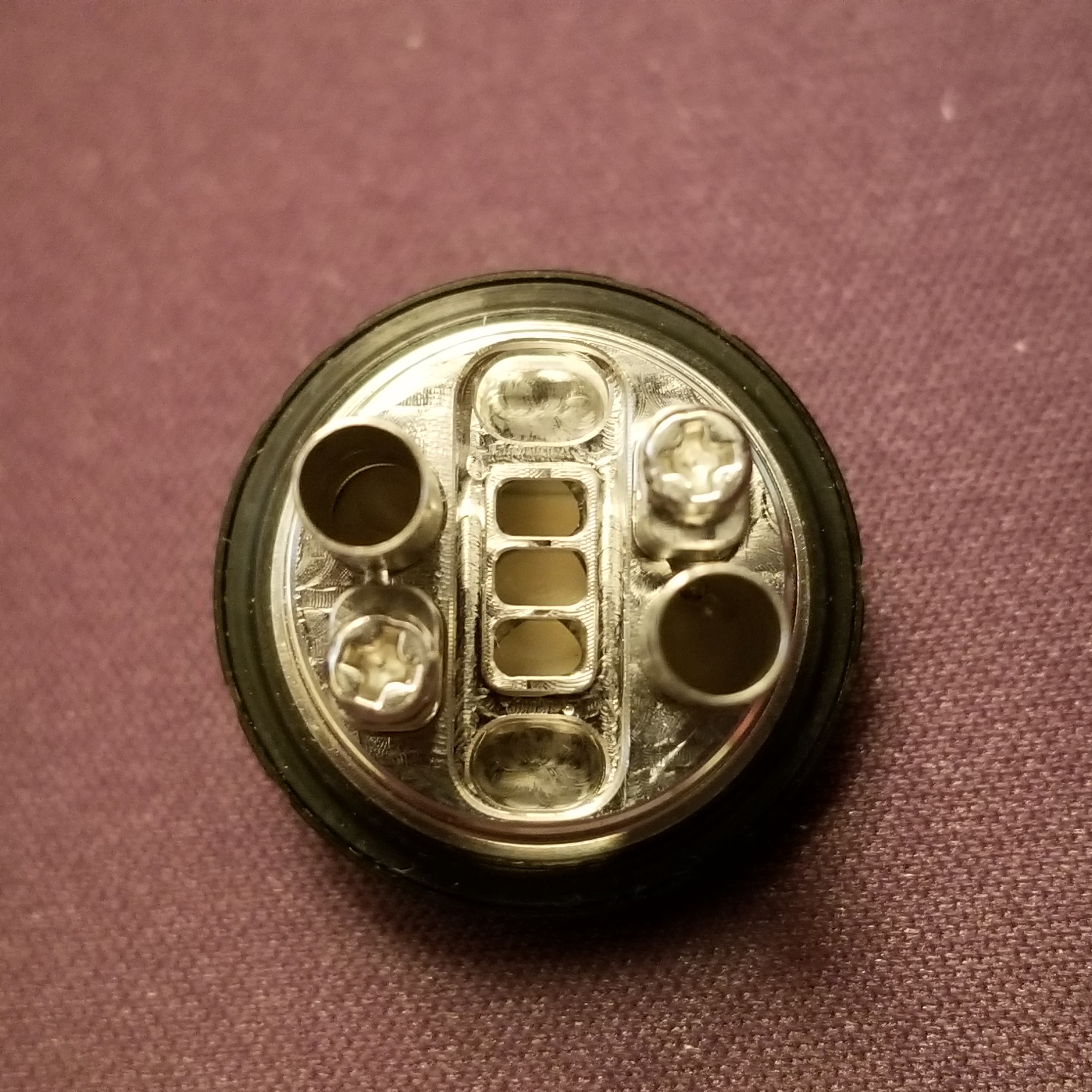 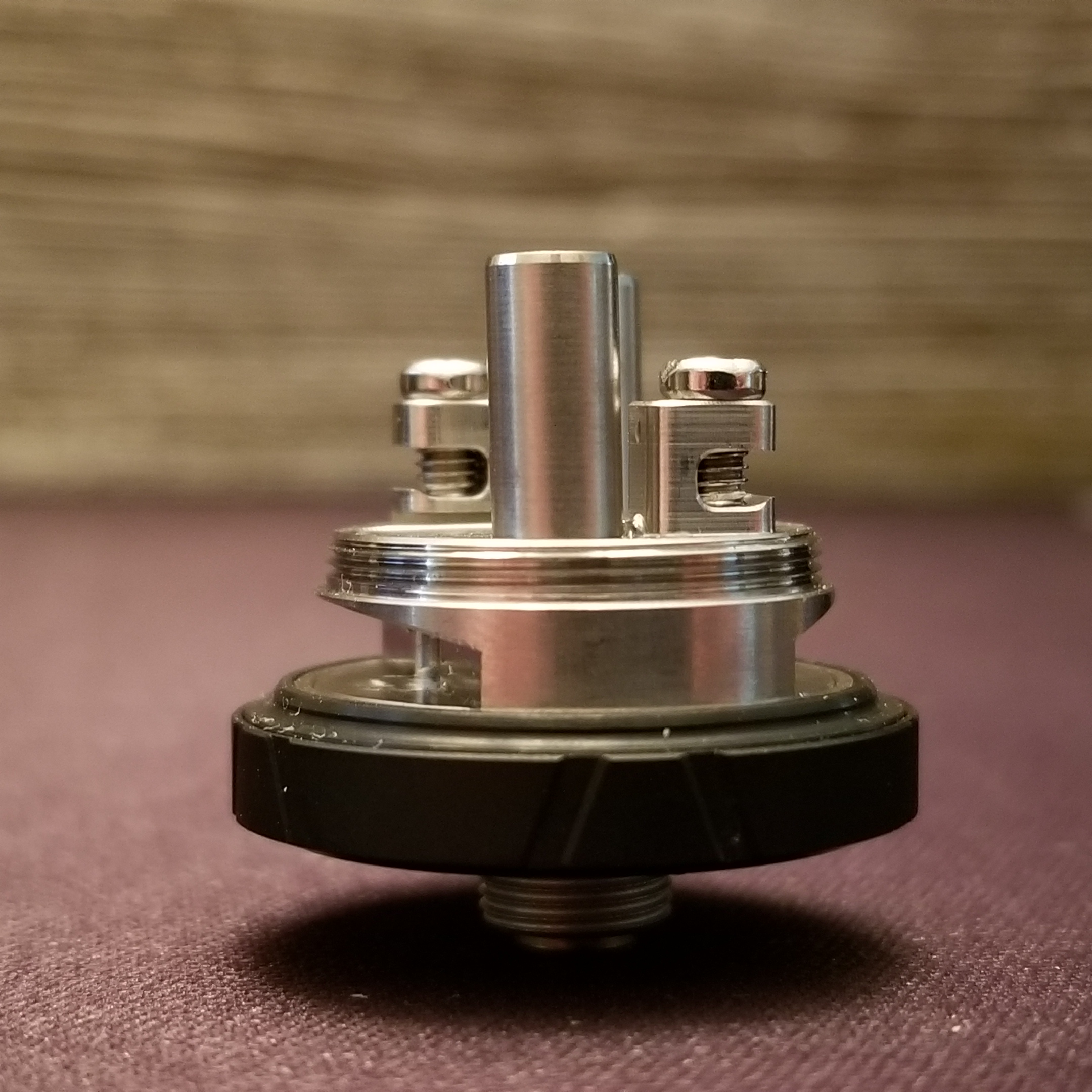 The top cap has the intake holes which correspond to the tubes in the deck. It is easy as pie to install, just twist the base until the tubes line up with the top holes and presto. 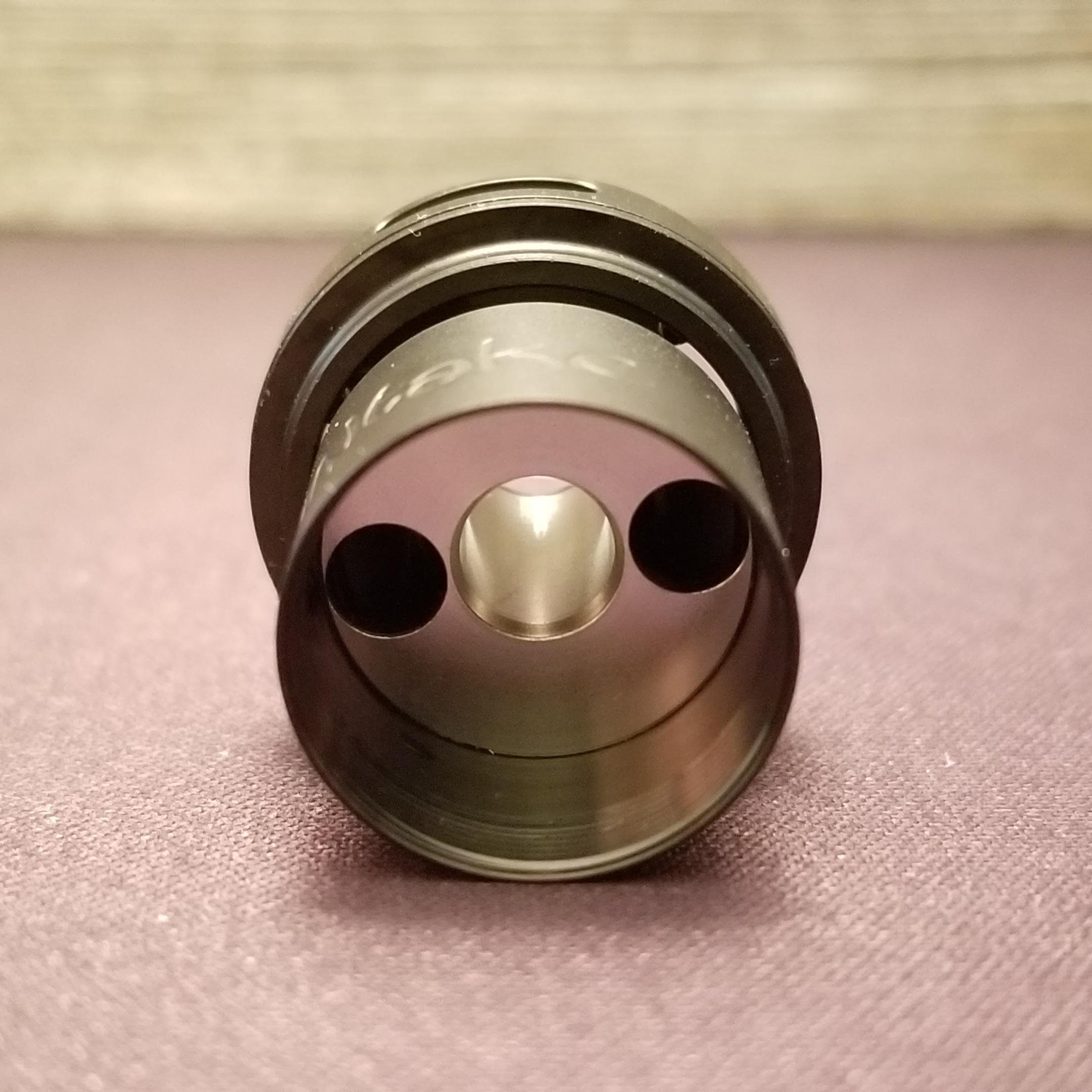 Here is a better shot of the Blue, it is next to the Black in the middle and Gunmetal on the right. The Black is what I received for review and a friend tried it and really liked it so as he was placing an order for the Gunmetal version I told him to get a Blue for me. 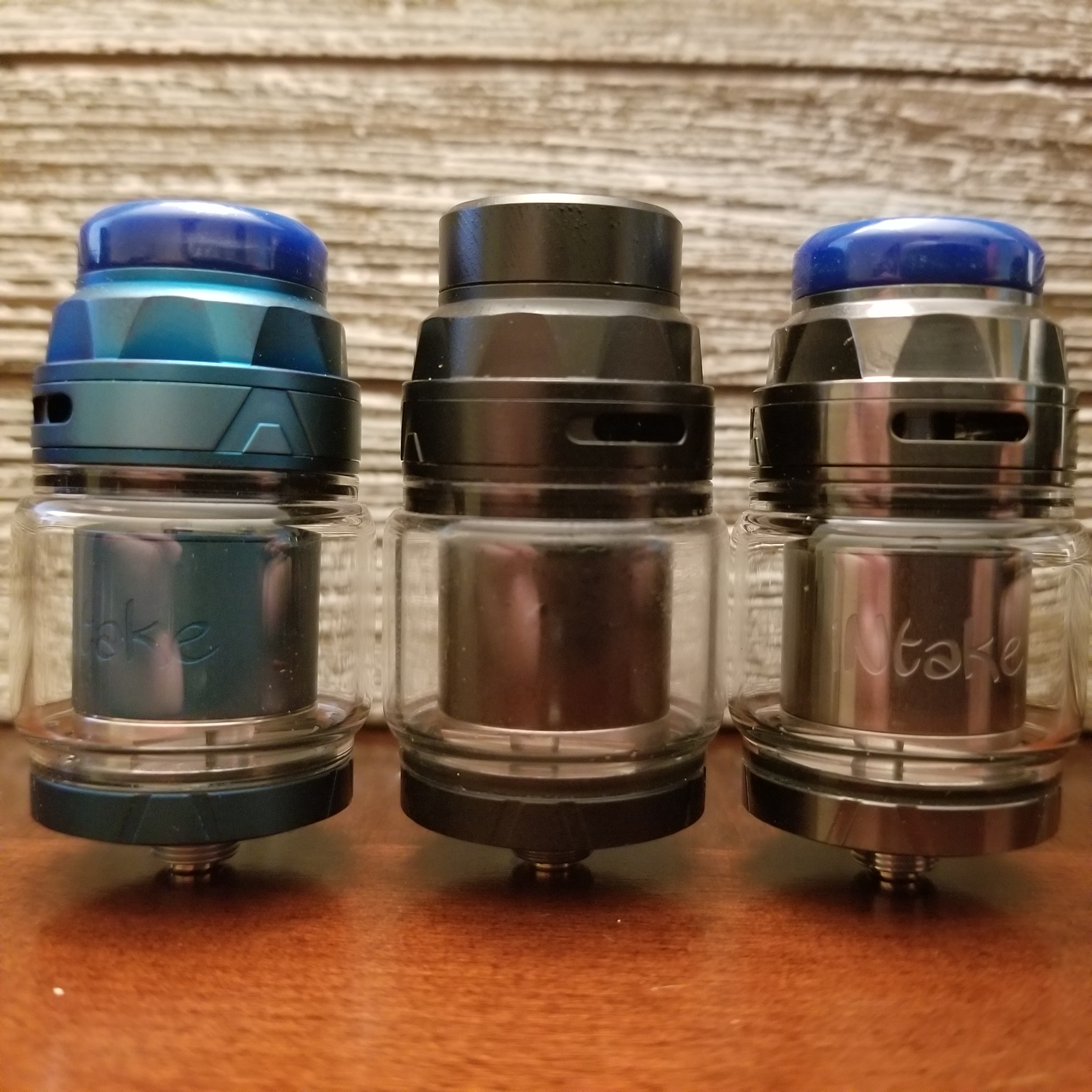 You can see that the Blue has some variations of color, I was disappointed when I received it, I was expecting a gloss blue like all the other colors. I really wanted it for the Lost Vape Paranormal PSO edition so I made a switch, placed the black barrel with the blue top and bottom. Not the greatest match but I have a hard time separating the pair. 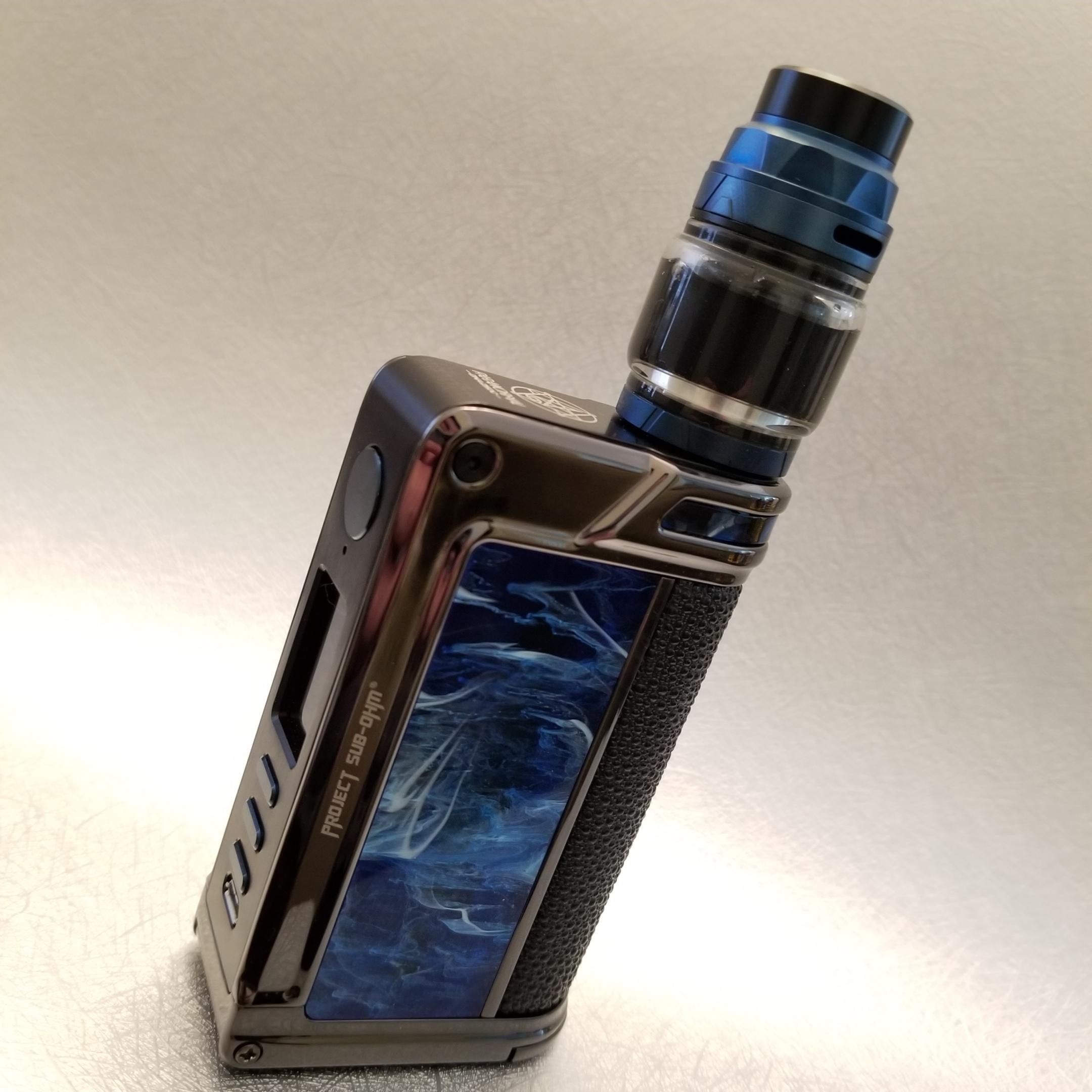 Let me first start out with what not to do. I had just received some pre coiled Aliens but didn’t realise until I went to install them that they are wrapped in reverse. Normally not a problem with normal build decks but in the Intake they only have 2 posts and my coil wound up facing down. I figured I would try it anyway, I always like to try different coil heights to see which performs better. 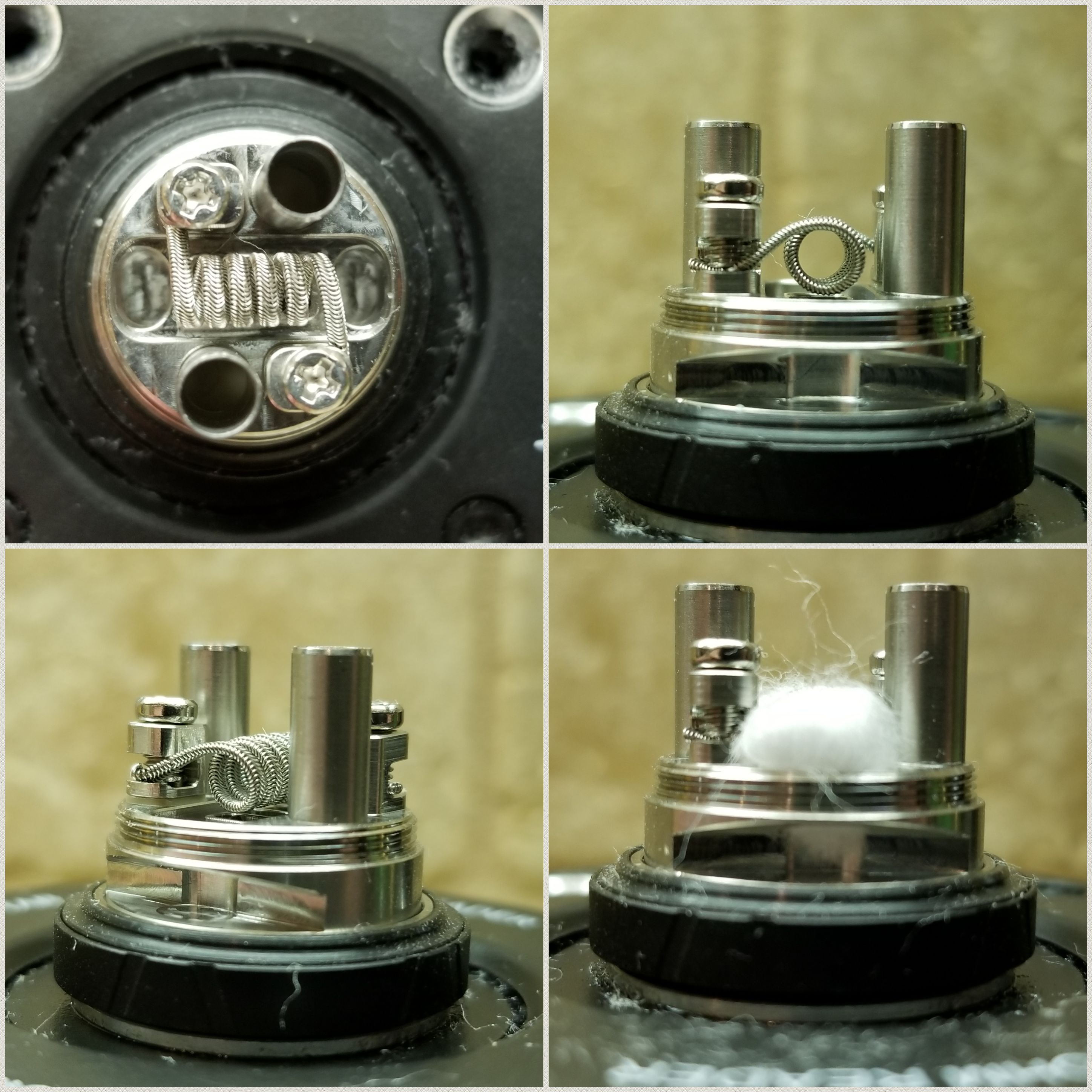 That build…mehhhhhh is being kind. First off it really kills the airflow on an RTA with an already restricted DL hit. Flavor pretty much sucked too, this was so bad it only lasted a tank and I rebuilt.

My next build was with a quad core clapton on a 3mm post, note how the build is now right side up away from the airflow with the leads about even with the posts. Much better results, airflow opened up and the flavor greatly improved. This is the build my friend tried when he decided to order his Intake RTA. 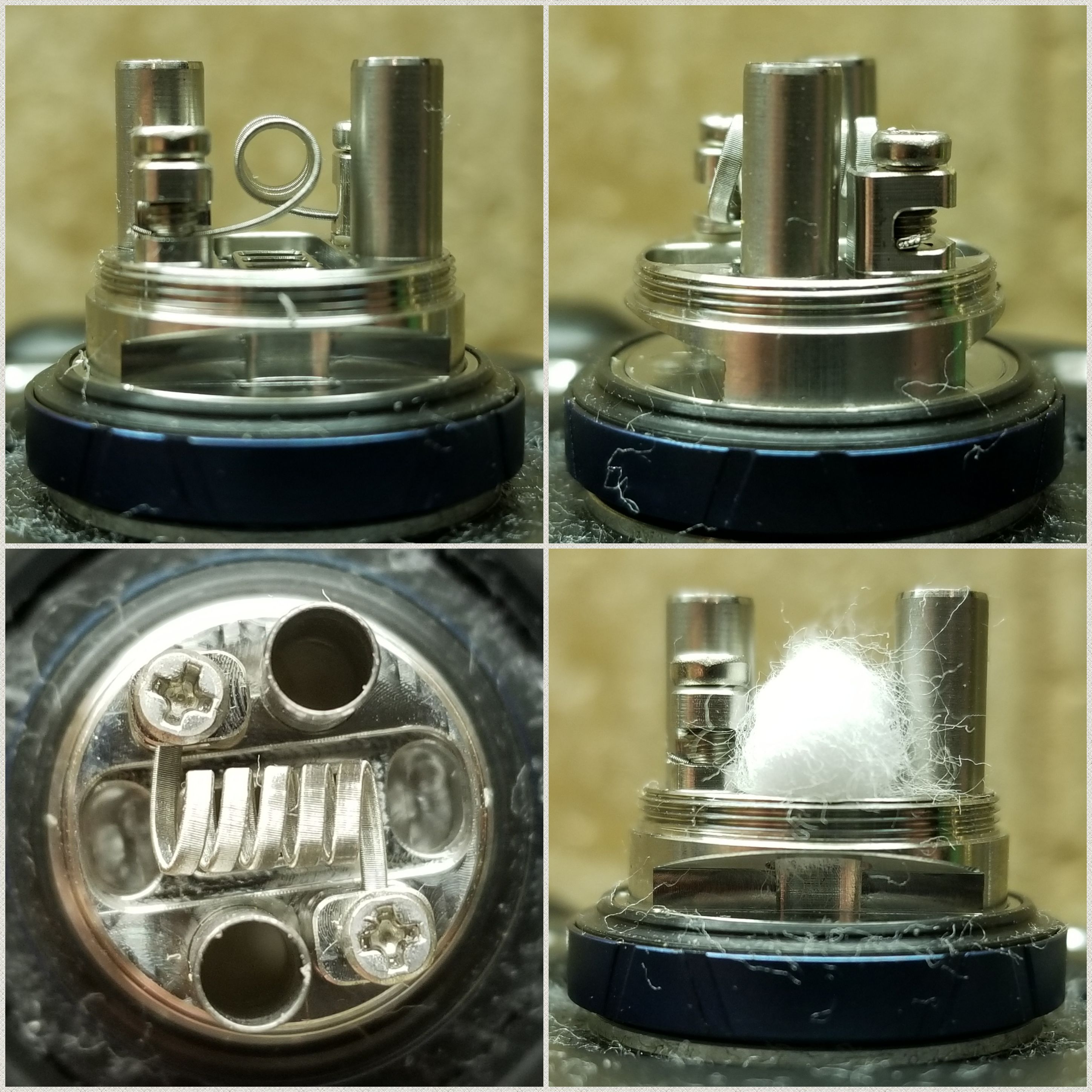 I then tried a dual core clapton but this time with a 2.5mm post and the coil situated a little higher. 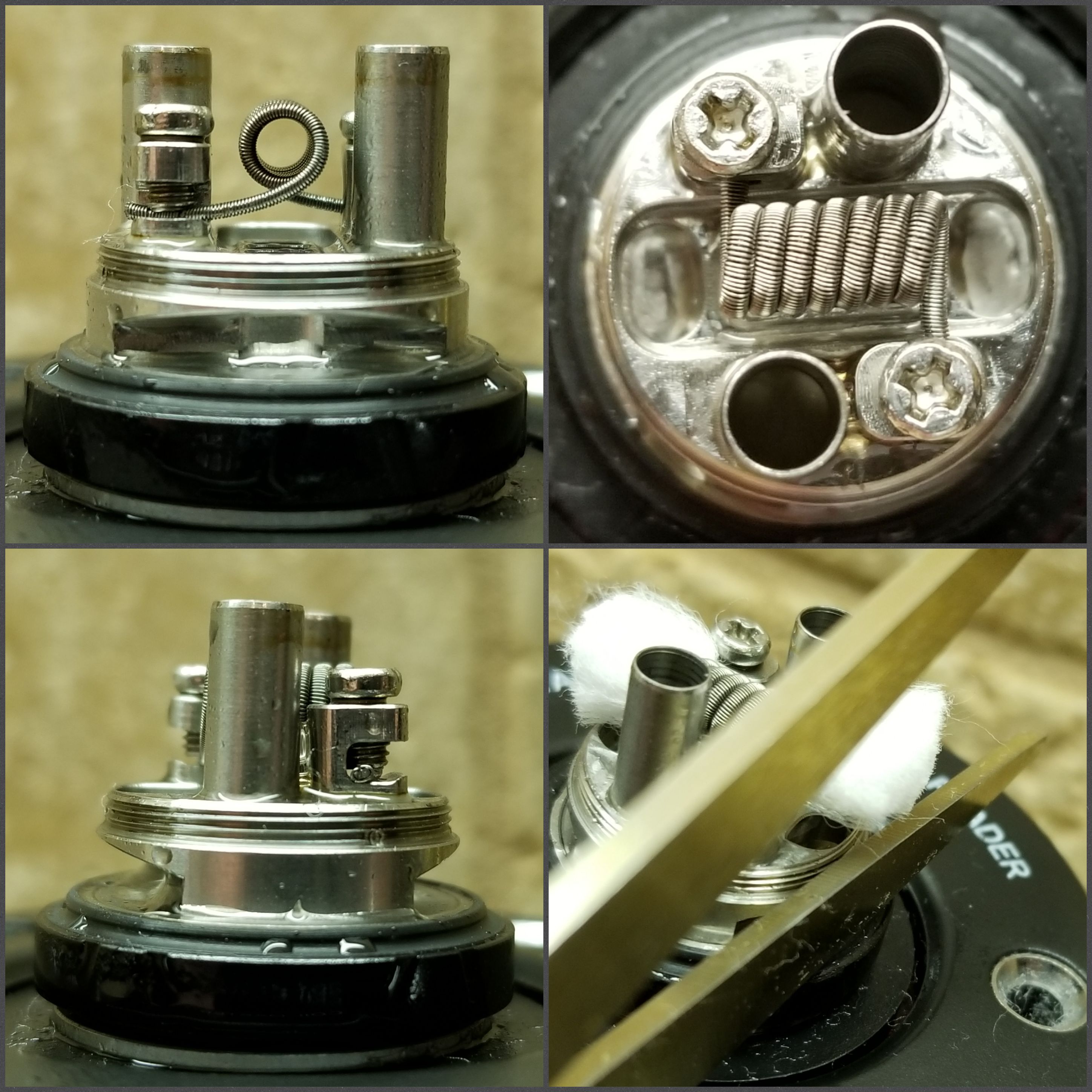 Good but the airflow did not increase and the flavor dropped off from the previous build. Not dramatically but noticeable and when I went to rewick I lowered the coil a little which helped but the 3mm ID coil was more flavorful and an all around better vape.

Having 2 Intakes I wound up with over 10 builds during this review evaluation but those 3 are the best examples.

Look on the last pic collage, the spot at where I cut my wicks, right at the threads on the deck, that is all you need. Here is a larger pic of that. 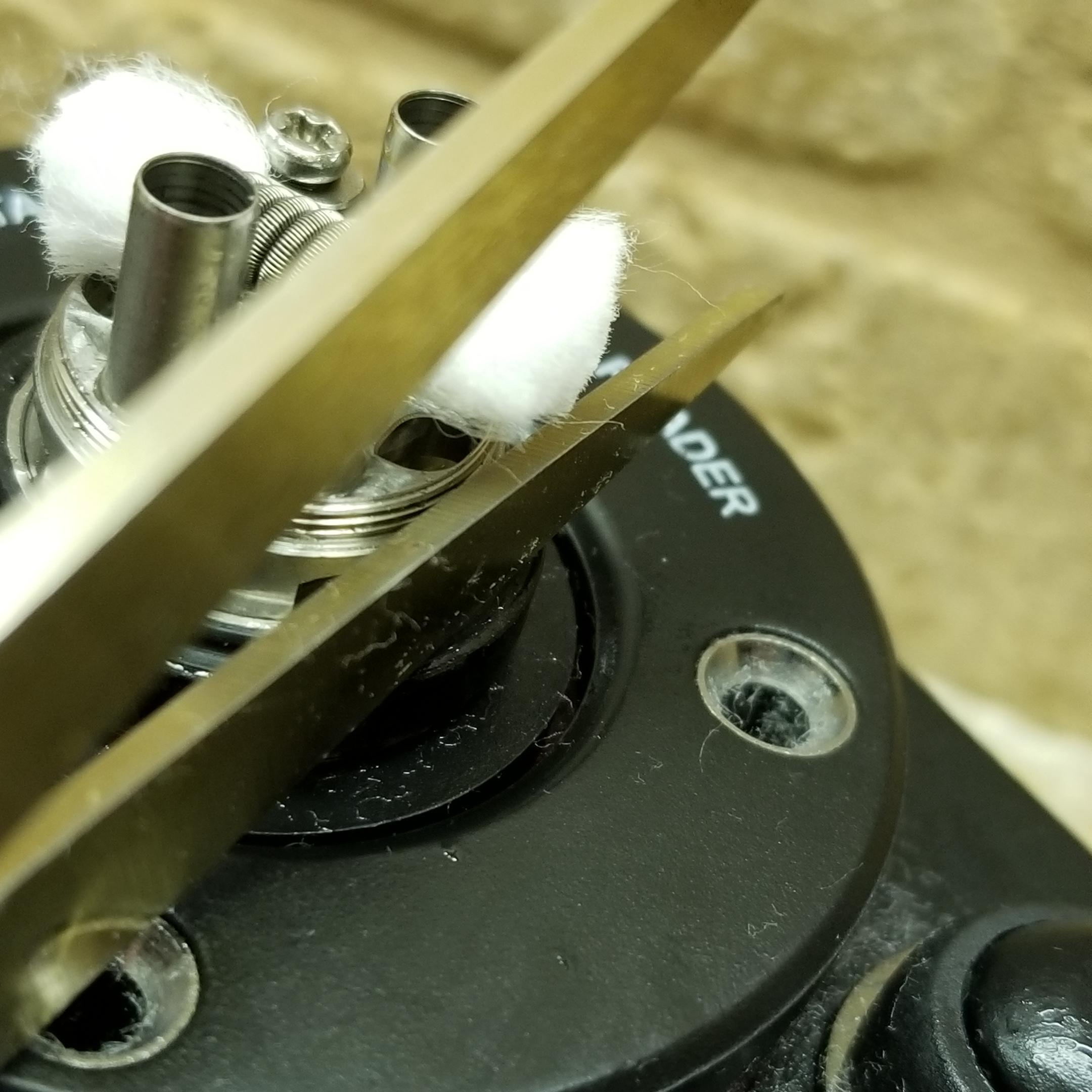 After cutting your wicks that close make sure to thin them out so that when you lightly fold them into the wick holes it is not too tight. No need for the wicks to go to the bottom as well, the only wrong way to wick the Intake is to use TOO much wick, that will give you dry hits and kill the flavor. It is an anti leak design anyway so as light as possible, just not too light or you can flood the deck and drink juice instead vape it but really is it simple.

Being a top airflow tank I thought a comparison to the Geekvape Zeus would be appropriate, a popular tank in it’s day and one that many will look at the Intake as a possible replacement. 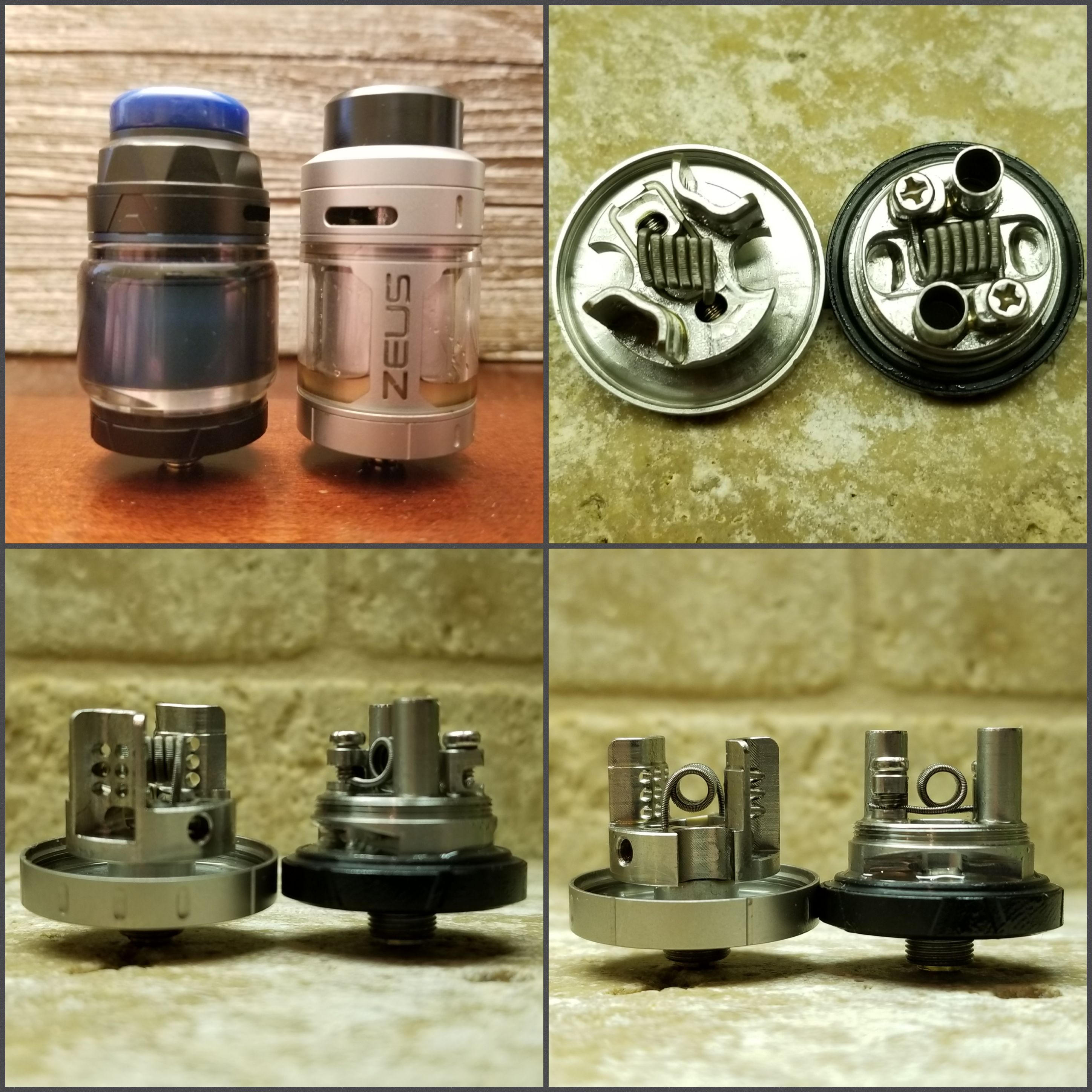 Using the same build in both the first thing you will notice is the Zeus has a lot more airflow. I had to close the airflow down on the Zeus about 3/4 to match the Intake full open. Flavor on both is pretty close but the Zeus is a little more of a cloud chucker due to the increased airflow. Builds and wicking are easier on the Intake, I feel a better tank for those new to rebuildables. If you have and love your Zeus and run it with the airflow closed down then the Intake would be a solid choice, not an upgrade but a sideways move IMO.

Had to break out the big boys of single coil RTA’s for my next comparison, the Vandy Vape Kylin Mini and Asmodus Zesthia, my 2 favorite single coil flavor RTA’s. 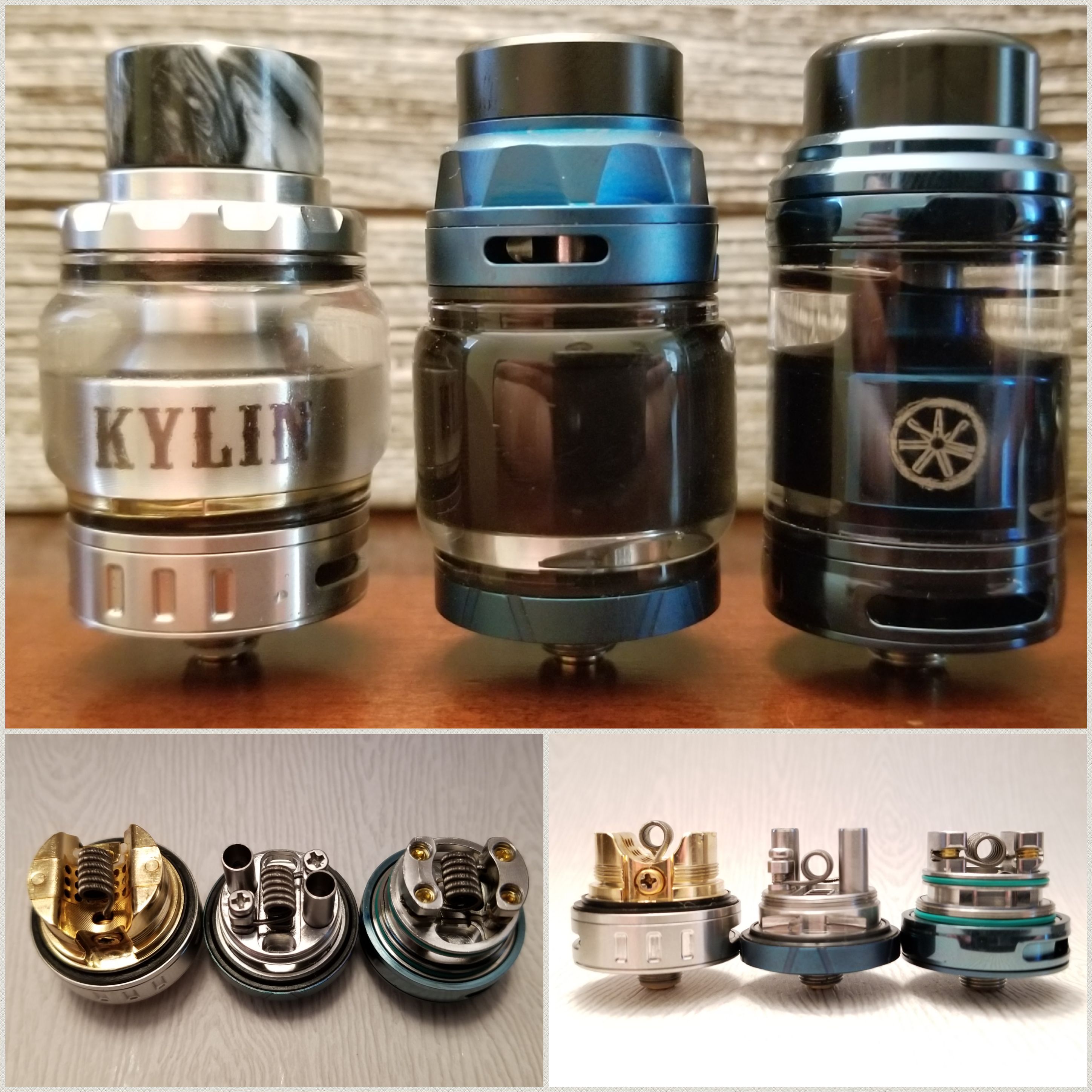 Same build on all 3 and ran on 3 identical mods to be fair. The Intake and Zesthia share a similar build deck, the Zesthia adds a second set of posts though so it does not matter how your coils are wrapped. Building on both the Intake and Zesthia is a breeze but the Intake is more forgiving being a top airflow. The Kylin Mini is more difficult to build as it is a postless deck and wicking is a PITA at first until you get use to it.

Flavor the Kylin Mini and Zesthia win hands down, not a surprise as there my 2 favorites but the Intake is not a dog in comparison. With some juices the Intake held its own but with others the Kylin and Zesthia were more bright and flavorful. I would try to not look at the tanks and used matching drip tips (not shown above, changed it after the photo) so I could just concentrate on the performance. Like I mentioned with some juices it was hard to identify which tank I just used, all of the airflow was matched as well. With other juices it was easy to pick out which was which, the Zesthia came out on top more often than not.

For rookie builders the Intake RTA is what I would recommend followed by the Zesthia, the Kylin Mini I would only recommend to experienced builders. My personal favorite is the Zesthia, not only is it easy to build but the flavor is excellent. The Kylin Mini is still a tank I use as a benchmark for my reviews but it is my least favorite to build on. If the Intake RTA had more airflow I would love it, that said I still really like it, the only reason I bought a second. The flavor is still good on the Intake when the build is right and I will continue to use mine, it hasn’t left my Paranormal in probably 3 weeks and I love that mod.

I would love to see a V2 of the Intake RTA, this time with more airflow, that is my main gripe. That said I have had the Intake for close to 6 weeks and have used it everyday, enjoyed it enough to buy a 2nd. I would definitely recommend the Intake RTA to those looking to get into rebuildables for the ease of building and wicking. For experienced builders looking for the best flavor single coil RTA the Asmodus Zesthia would be my recommendation. For those experienced builders if they are looking for a leak proof RTA to carry in there pocket then the Intake is a solid choice. You will just have a trade off of flavor and decreased airflow but it is not a huge difference, at least when it comes to flavor.

I think Augvape is making a turn, their products are beginning to improve again to where they once were with the original Boreas. I think the Intake RTA is a winner for its category of top airflow RTA’s. The new products I saw at the ECC show from Augvape are both innovative and sexy as hell, they got a new mod that I plan to buy once released. A new subtank too with dual mesh coils, yep, gonna buy that too.

You can find more info on the Intake RTA here: INTAKE RTA - augvape and a good source for finding the best price here: http://www.vapecrawler.com/results/Augvape%20Intake%20RTA

Great review and agree on all points. My benchmark happens to be the single Ammit but very similar. The only place we differ and that is purely preference, is that I dig the amount of restriction on the intake and often find myself cranking down the Zeus to match it. Kinda funny you mentioned that as I’m runnin a Zeus right next to two intakes, lol.

Thank you my friend.

Yeah, I like the Ammit 25 as well but could not locate it, would have loved to build that instead of the kylin mini…lol. Yeah, preference makes a huge difference, I run my Zeus wide open and it is funny that we both have 2 Intakes, there like Pringles

Once I saw my friends gunmetal I really debated getting that color too, it is a sickness I tellz ya

Amen, it truly is.