Asmodus are an American vaping company manufacturing out of China and have released many popular products most notably their Minikin range of devices and devices with stabwood finishes!

Here we have an upgraded version of their budget MTL RTA the Anani. The Anani V2 is smaller than the original being 22mm at it’s base and has added adjustable airflow as well as coming with an extra drip-tip and 2 different pre-wound coils. With all the quality MTL RTA’s that we have seen over the past 12 months let’s see how the second rendition of the Anani shapes up! 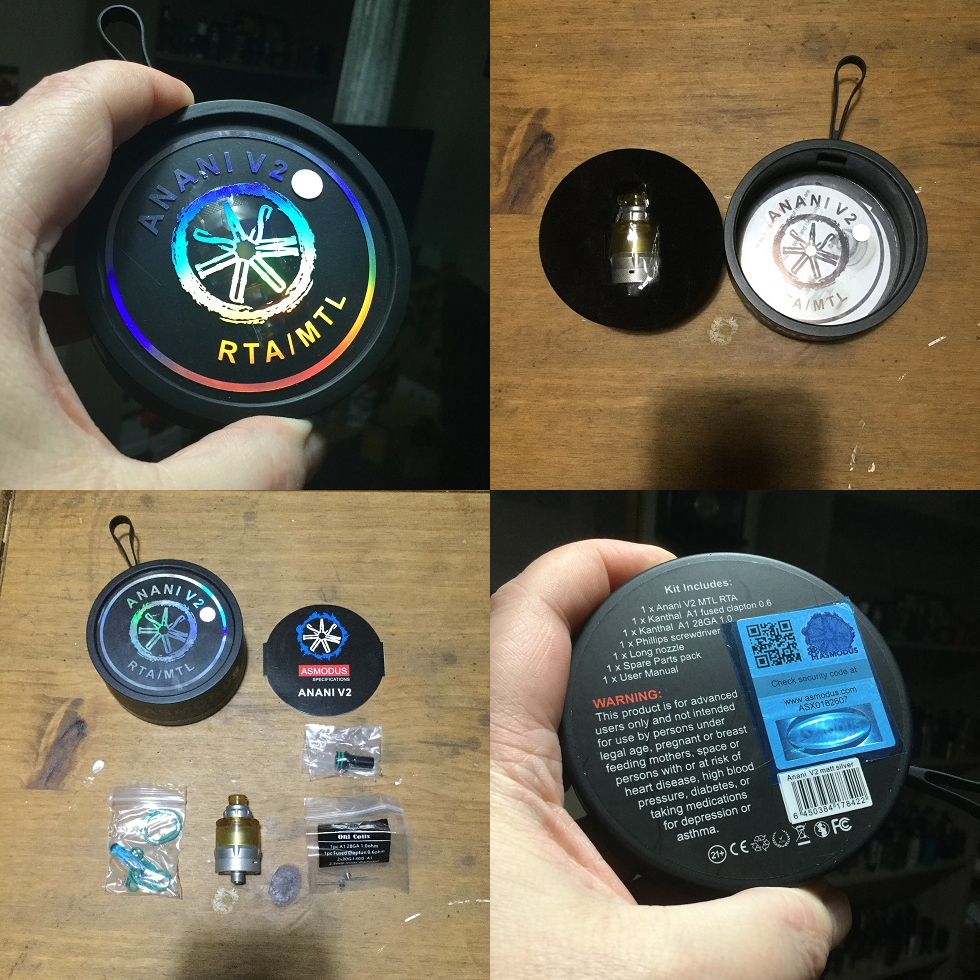 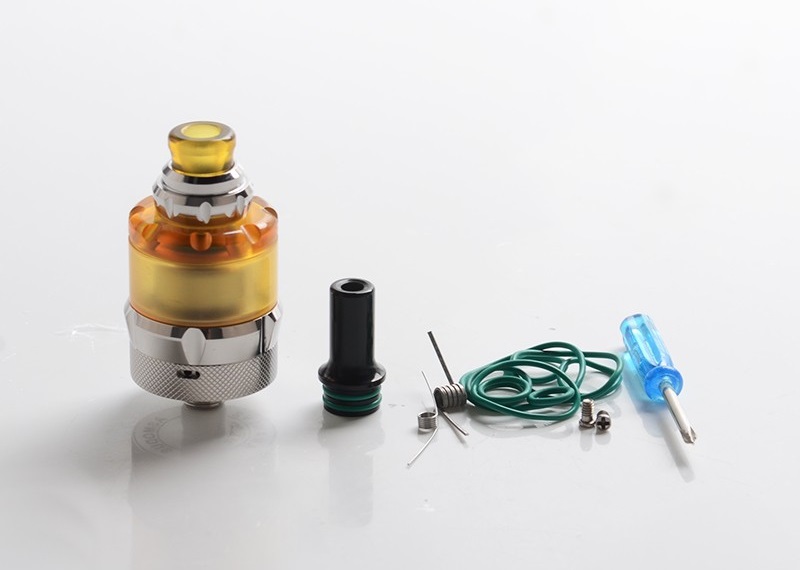 The Anani V2 has a unique futuristic look which is going to divide opinion and possibly give most a nightmare when it comes to what to match it up with. I am all for unique looking original products when it comes to aesthetics but even i am a bit undecided about this, not sure i really like it!!! It comes in the Asmosdus customary cannister style packaging and a Silver/Grey sticker confirmed i had received the Blasted Stainless Steel version which is more a light Grey than Silver, the options are Black, Gold, Blasted Stainless Steel or Brushed Stainless Steel. The V2 does look taller than the original but that’s just an illusion due to the V2 only being 22mm at the base giving it a slightly slimmer appearance!

We have a thick base section with heavy knurling before the bottom of the chamber section tapers out severely giving it a unique look. The two tone Ultem top cap then sits sealed with an o-ring on the bottom of the chamber section. The two tones are achieved by the main section of the Ultem cap being unpolished while the top is highly polished! We then have a section which matches the base of the chamber which acts as a base for your drip-tip to fit (it’s a standard 510 fitting) which just adds to the funky look! Pre-installed is a rather nice looking short profile Ultem 510 drip-tip.

Moving back to the base we have a short airflow slot which can be lined up with a single hole or slot then moving to the underneath of the base we have printed branding and safety stamps. Finally the 510 positive pin barely protrudes so please avoid using this RTA on an unregulated device! 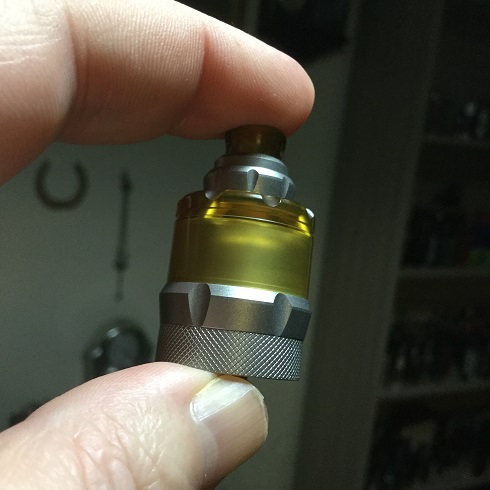 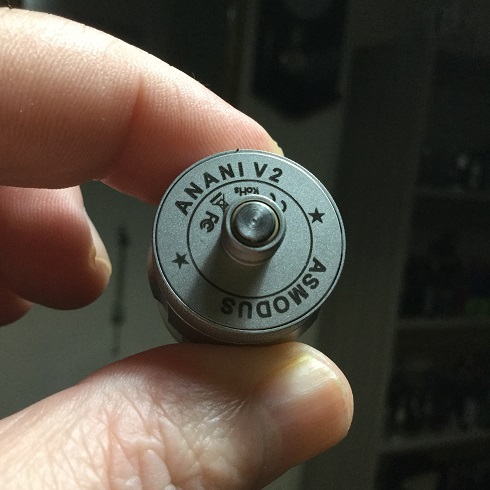 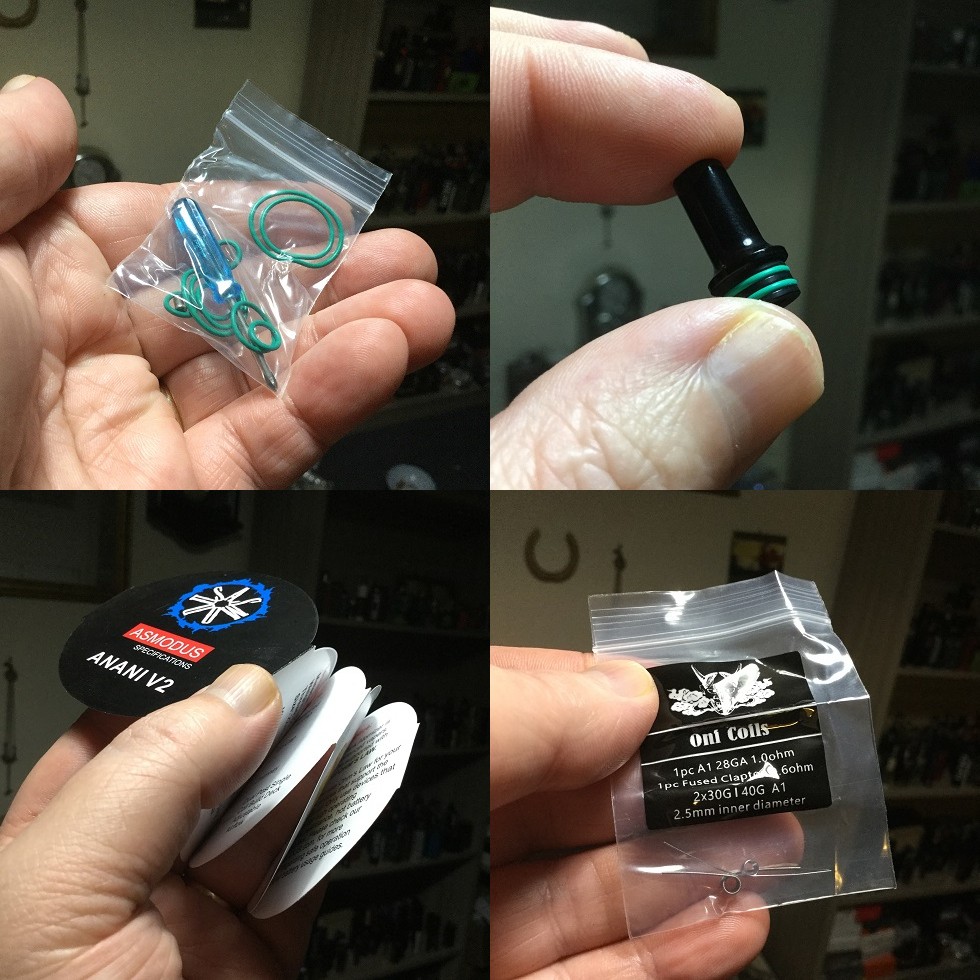 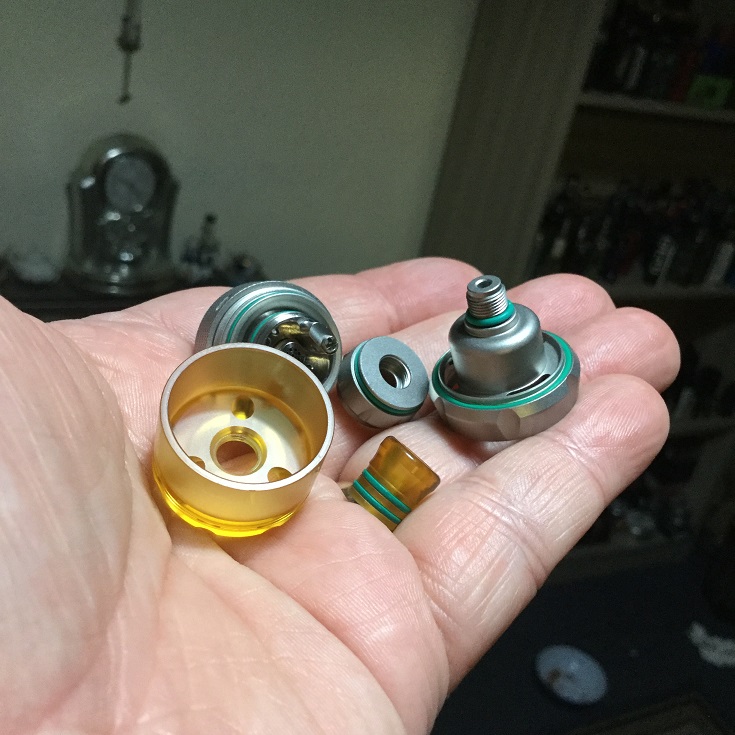 Up top we start with that futuristic section with 510 drip tip fitting, pre-installed is a short profile Ultem drip tip which actually looks nice but i found my lips were touching the section below which was uncomfortable so switched for the long MTL delrin drip tip which was much better but made the RTA look even funkier! 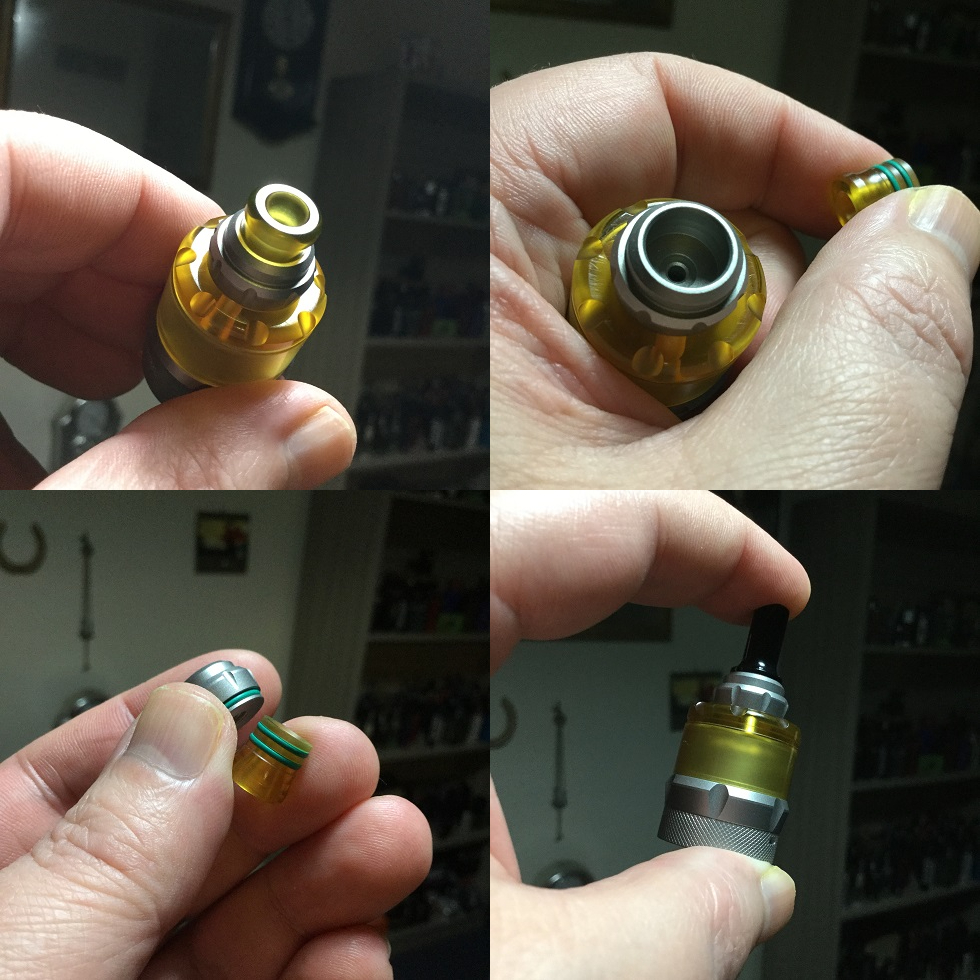 The section which accommodates your 510 drip-tip also unscrews to reveal 3 fill port holes rather than slots. Looking at them although obviously air can escape from the holes not being occupied by your nozzle it does look like filling will need to be done very carefully else it could get messy. Fair enough you can’t use droppers or thick nozzles but standard gorilla nozzles are fine. The holes are actually slanted and filling surprised me as it could be done quickly and mess free, much better than it looks! 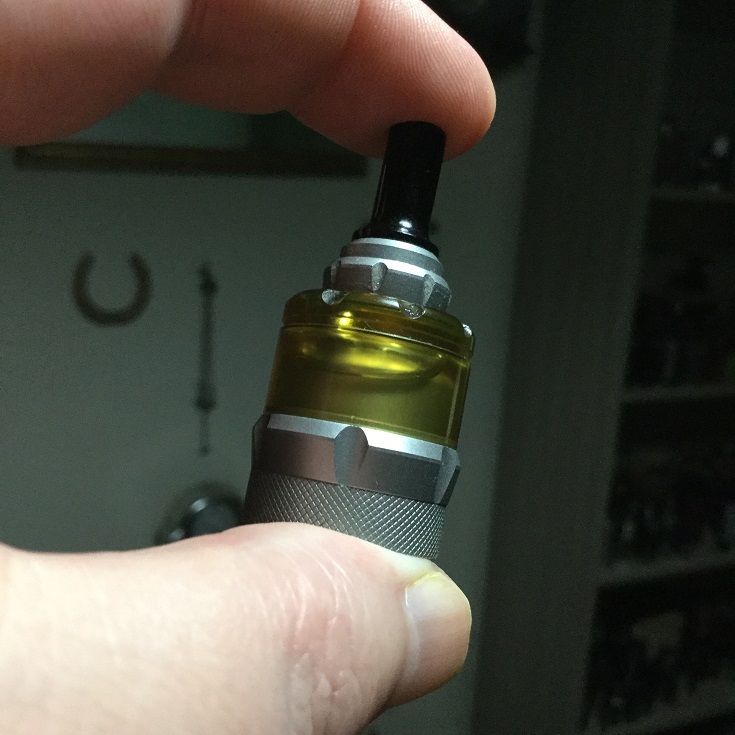 The base section with deck unscrews from the chamber and then the chimney which is part of the chamber section can get unscrewed from the top of the Ultem cap. The chamber has a short chimney section with very narrow bore and looking at why this also has a protruding base section as well as standard chamber we can see 3 slots which will allow e-liquid to cascade down to the base to feed the wicking channels! The threading and machining in general is very good and as you can see from the pictures plenty of substantial O-rings keeps the RTA well sealed but i will point out when unscrewing or screwing back in place the base section with deck it gives an annoying squeak, the threading could be better! 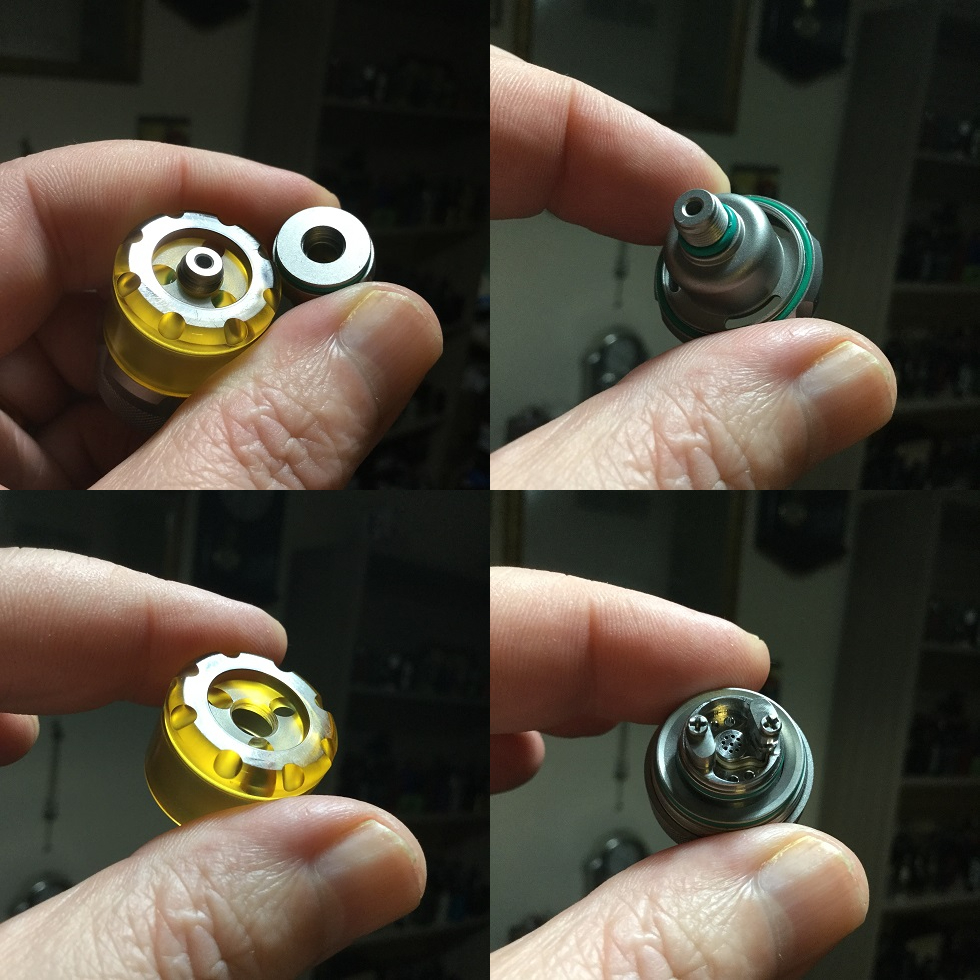 Looking at the deck you can see a ring of 8 tiny holes plus a central hole, it could be described as a shower head. Your coil will be positioned directly above this shower head which is fed by air from the side of the base. On the side of the base we have both a 1mm hole and then a short slot, the airflow control ring then has a short slot that matches the slot on the base section.

You can line the slot up with the 1mm hole for it’s tightest draw or can move the AFC so the hole is still exposed but so is the very outside of the slot essentially given the equivalent of two 1mm holes. You can move the AFC further to line up with the slot to give a very loose MTL draw! Looking inside the chamber you can see it’s quite a small area and has a conical ceiling so it will give a reduced area to go with the narrow bore short chimney! 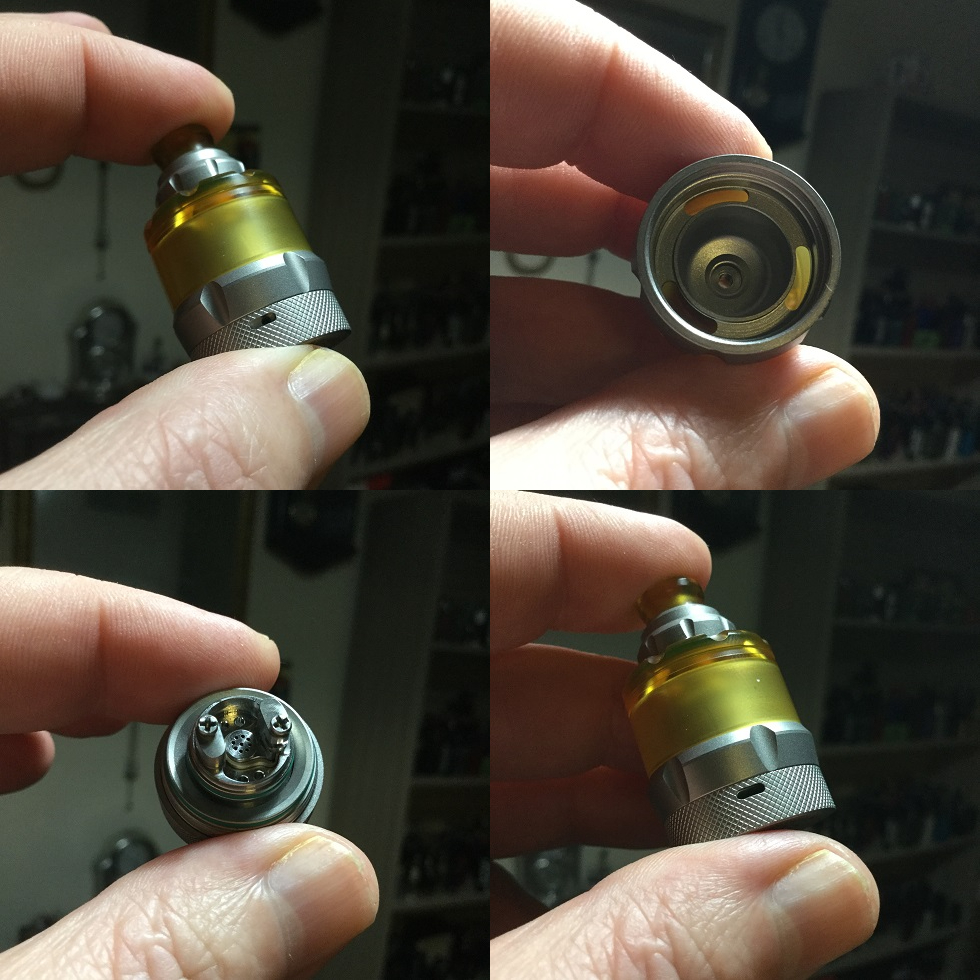 The Deck And Build

I need to add this section to up the content but kind of feel i will be offending people as this is so easy to build and wick you can’t go wrong and it also doesn’t need explaining. But at the risk of offending people (i apologise in advance) and just in case some readers are completely new to building i will go through it.

The deck has two posts facing each other and your coil leads just get slid in from the sides where a lip on each post stops them popping out while securing from above via the philips grub screws. So once your leads are slid into the terminals just hold the coil over the “shower head” airflow outlet and tighten down before adjusting the position of your coil if needed with a coiling rod or fit for purpose tool. Then snip your access leads as close to the posts as possible before checking the screws are still nice and tight. Then just give your coil a low wattage pulse and strum any hotspots to eradicate although i used both coils and had no hotspots whatsoever, nice mtl coils! 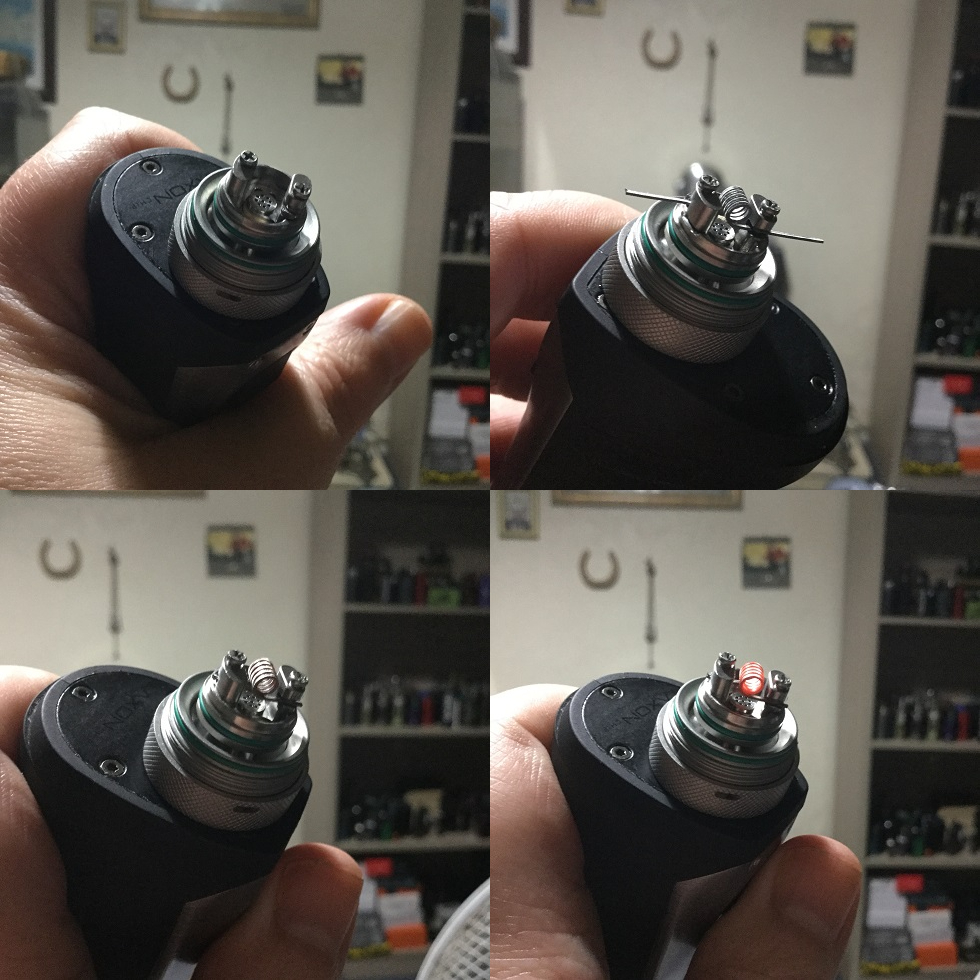 Wicking is just as easy, you have a channel each side for each end of your cotton to rest in which have 2 small holes on the bottom to feed your cotton with juice. Just cut your cotton bowtie style and just gently rest your cotton ends into the channels and that’s it! 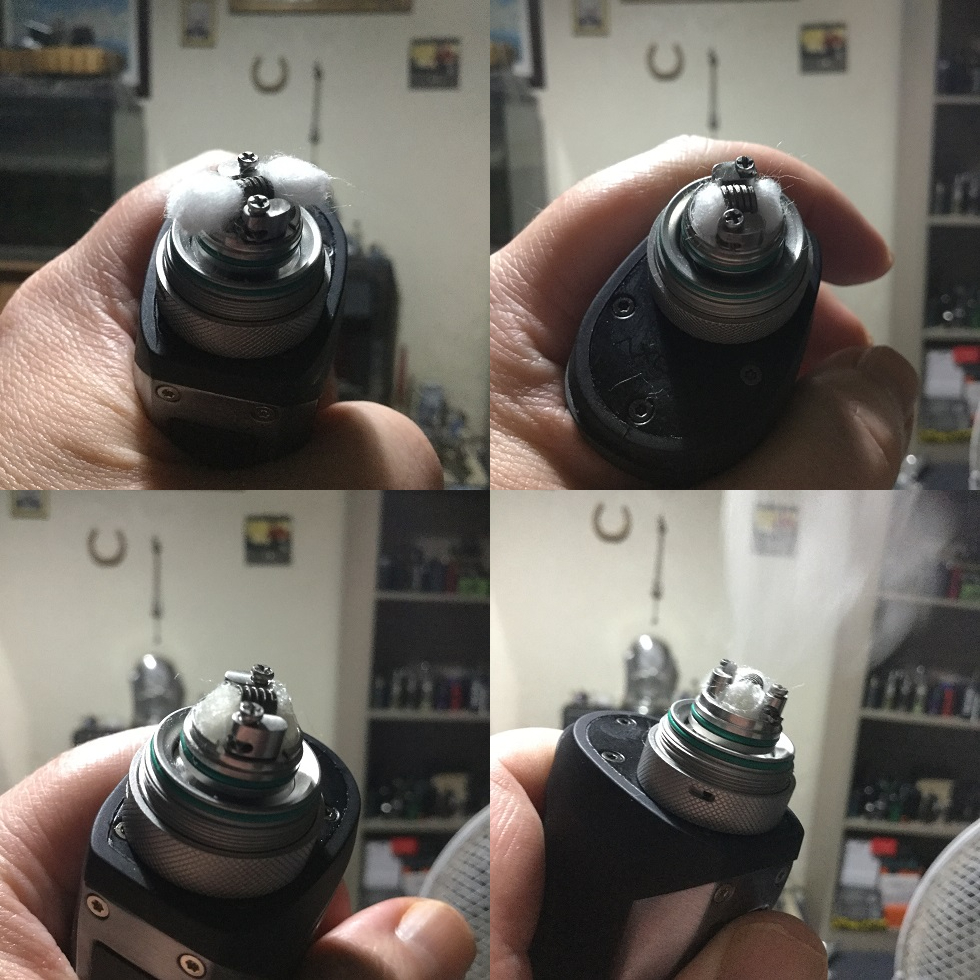 I have always liked Asmodus products but the Anani V2 is a mixed bag and really depends if it falls in your wheelhouse or not. The flavour is up there with the other quality MTL RTA’s of late and that “shower head” airflow outlet underneath the coil makes this a silky smooth vape but airflow versatility let’s it down!

Having adjustable airflow is an upgrade from version 1 but when we see most MTL RTA’s coming with numerous inserts as well as a choice of 5 or 6 different sized holes on the airflow ring sometimes even being followed by a slot so you can have 1,2,3 or however many holes open as you like then the adjustable airflow on the Anani V2 is very limited. I do rate MTL RTA’s that go down to a very tight draw as a good MTL tank should cover the full MTL draw spectrum however i personally don’t like a tight draw but more a mid to loose draw and the Anani V2 gives me that draw on the single hole which is it’s tightest setting so those that say this gives a tight draw i have to disagree with because this is a mid to loose MTL at it’s tightest and then moves to a loose followed by a very loose MTL with the slot. For those that have used the Wotofo Cog then the draw spectrum is the same, similar flavour but the Anani V2 is smoother!

Other things to point out is although the machining and threading of the top section and where the chimney screws to the cap is all spot on the threading where the base screws on to the chamber isn’t very smooth and is squeaky! Whether i like the looks or not is subjective and will divide opinion although i do think the Ultem drip tip is nice looking but not very comfortable, the longer delrin drip tip is much better but as already mentioned looks even funkier with the look of the tank! The airflow control ring moves with a nice tolerance when not attached to a device but is difficult to adjust when on a device! The final pro for the Anani V2 is just how simple the build is making this a good choice for the first time builder! 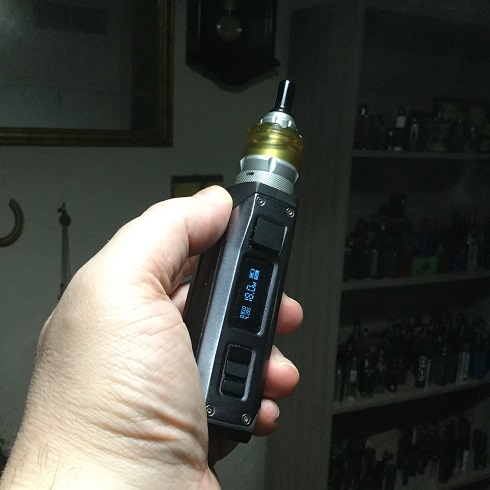 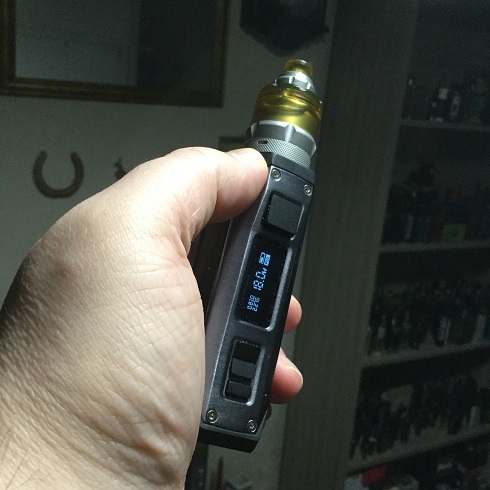 I would once again like to thank Ella from Sourcemore for supplying the asMODus Anani V2 MTL RTA, thanks for reading and stay safe!

Very nicely done @Timwis. Something about the yellow and green just works. Thanks for posting this.

Nice review @Timwis. As a MTL only vaper I would be interested in this if it was a tighter draw. The deck airflow holes would be the issue here I think. The OG Ares had a similar shower head air system which made it impossible to get a tightish draw.

The look is interesting, would be interesting to use on a futuristic styled mod. Never been a fan of ultem instead of glass on RTA’s but suits the style.

Yeah @ianc13 , i like a medium loose draw yet i am using this on the hole so this isn’t a tight MTL tank but more like the Cog but then i have heard a few say it is a tight MTL so no idea what they are on!

Yeah those O-rings are a nice colour!

Having no MTL RTA’s in my collection, but thinking of giving that style a try lately, a loose draw would be a good place to get my feet wet

So the timing of your review was perfect, thanks