Basically if I were @VapeyMama what pairs well with Jack? That type of shit.

(If this makes sense, I did good. I finished the bottle of Woodford Reserve.) (Sad times, means I need a bigger bottle.)

adult beverage of choice, what are you drinking?

Gave up alcohol a couple years ago.

what are you vaping?

Something custard/dessert oriented. Fruits taste funny with tea (for me).

So when you find yourself enjoying an adult beverage of choice, what are you drinking?

Well you answered the first question for me, I’m drinking Jack. (I mean…not right now, its only 6 in the morning…)

Second question, what are you vaping?

I reeally like tpa Kentucky bourbon flavor, and it goes great with Jack. So I’ll often reach for one of my mixes with that in it.
If I’m drinking vodka I like something with lemon or apple.

Fruits taste funny with tea (for me).

Me too. And with coffee. I usually vape creamy custardy things anyway, but if I happen to be on a fruit kick I have to set it aside while I’m drinking tea or coffee.

Random thought: I’ve flavored alcohol with my diy flavors before… would vaping and drinking the same flavor(s) compliment each other or just give you vapers tongue faster?

Interesting thought. Please post your results. Diet Pepsi works best for me, lol. No explanation. Just makes the flavors in the vape “pop”.

I will! I’m actually thinking a little Buttered Naughty Girl one-shot in some whiskey might be nice, so I’ll try that along with a tank full of BNG.

Lol, I’m thinkin buttered naught girl would go good with anything, but that may be lil Ogre thinkin.

Whiskey is gonna kill all flavour

Hmm… Might have to try it in whiskey and vodka…
I’ll have a shot or two of each.

Oh god, buttered naughty vodka is delicious. And @Grubby you were right, the whiskey overpowers the one-shot. I needed 10 drops to taste it in the whiskey but only 5 for the vodka. And it goes wonderfully with the tank of bng! 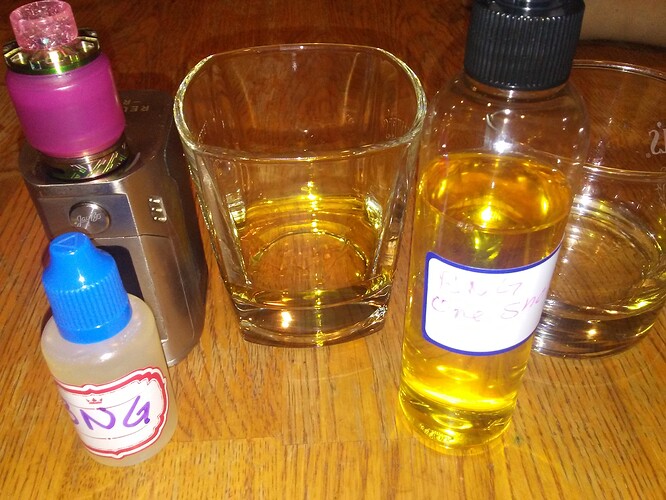 EDIT! I take it back. By the time I finished both of those drinks it was way too rich.
Takeaway: drinking and vaping the same flavor is flavor overload.

Alcohol, and vape juice. Seriously though. I’ve never tried to pair anything with anything. Interesting though, never thought of it. I like drinking, and I like vaping, and they seem to get along quite well whatever the combo.