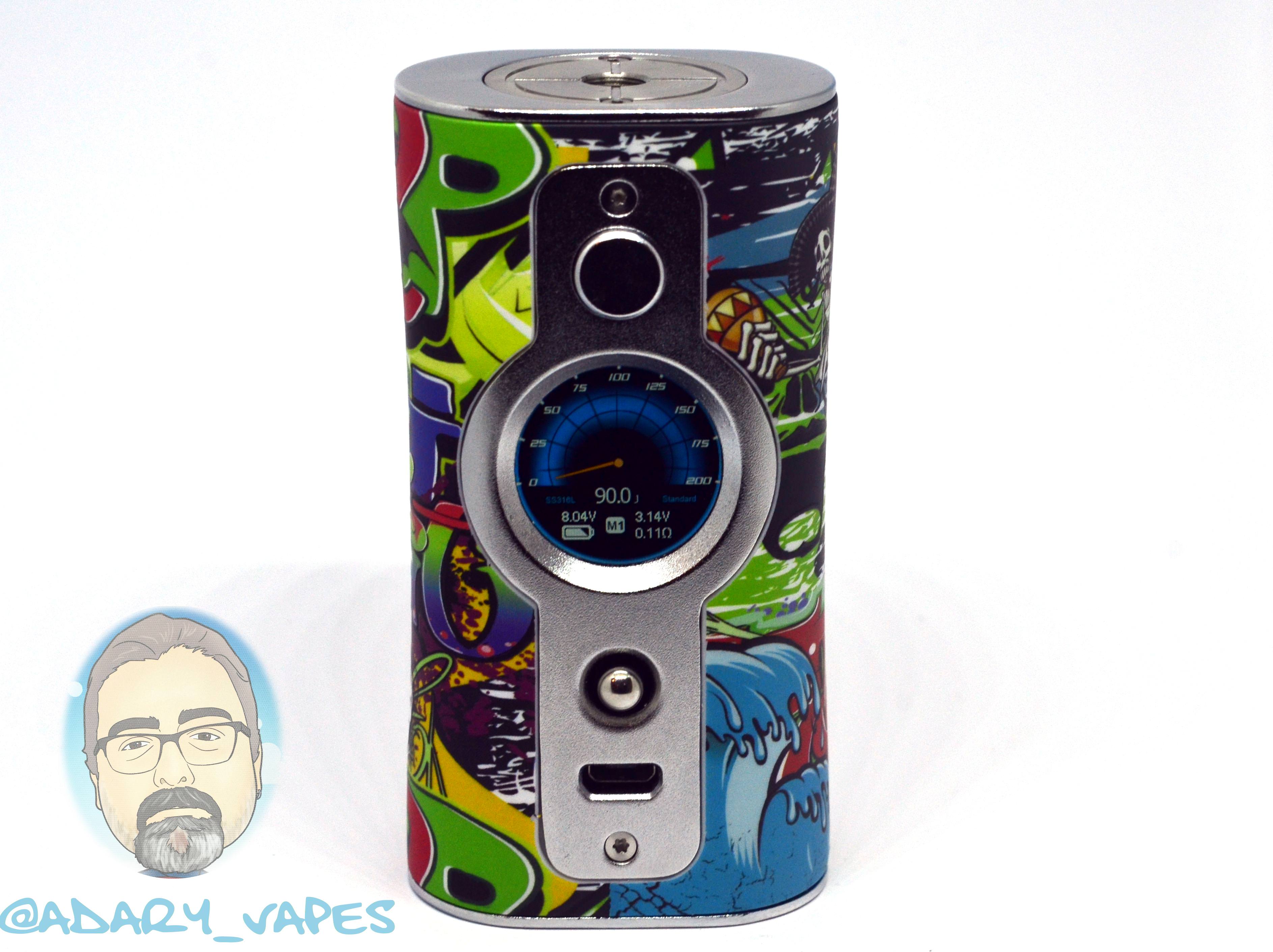 I guess everyone got used to my disclaimers so here is it for this review: I purchased this mod for personal use. It wasn’t sponsored by anyone (I do wish it was though). This should indicate that this review will be as impartial and as honest as possible (not that my reviews would be anything but honest and impartial. 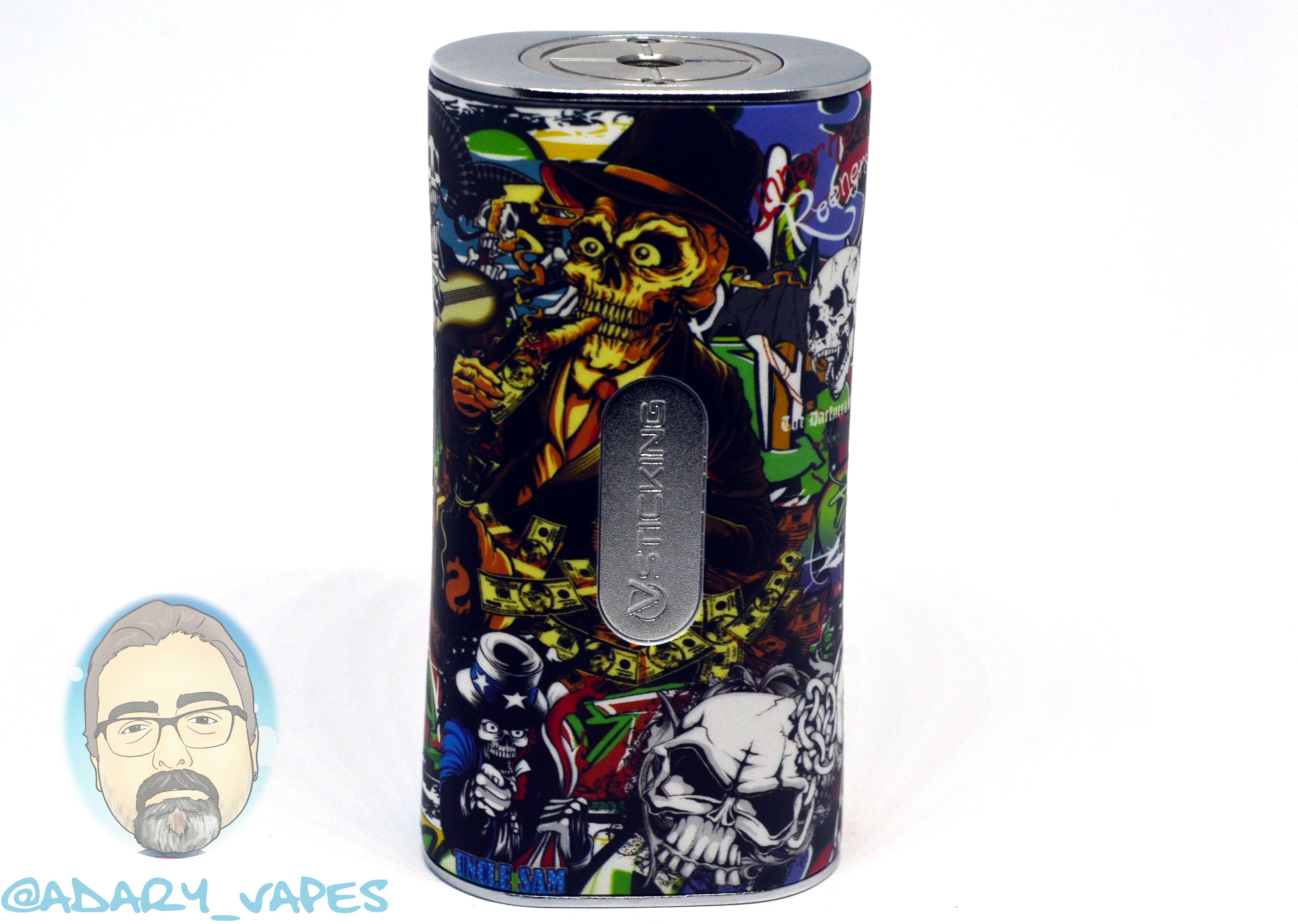 In the past two months of so a new mod started popping up on various sites I visit. It was the Vsticking VK530. Three things about it caught my attention straight away:

Considering I’m a big fan of the G-class, I just had to get one for myself and see how good it is. I did wait a bit for the black Friday deals, and I managed to snag one for about $50 from fasttech.com. Two weeks later the mod arrived and here we are 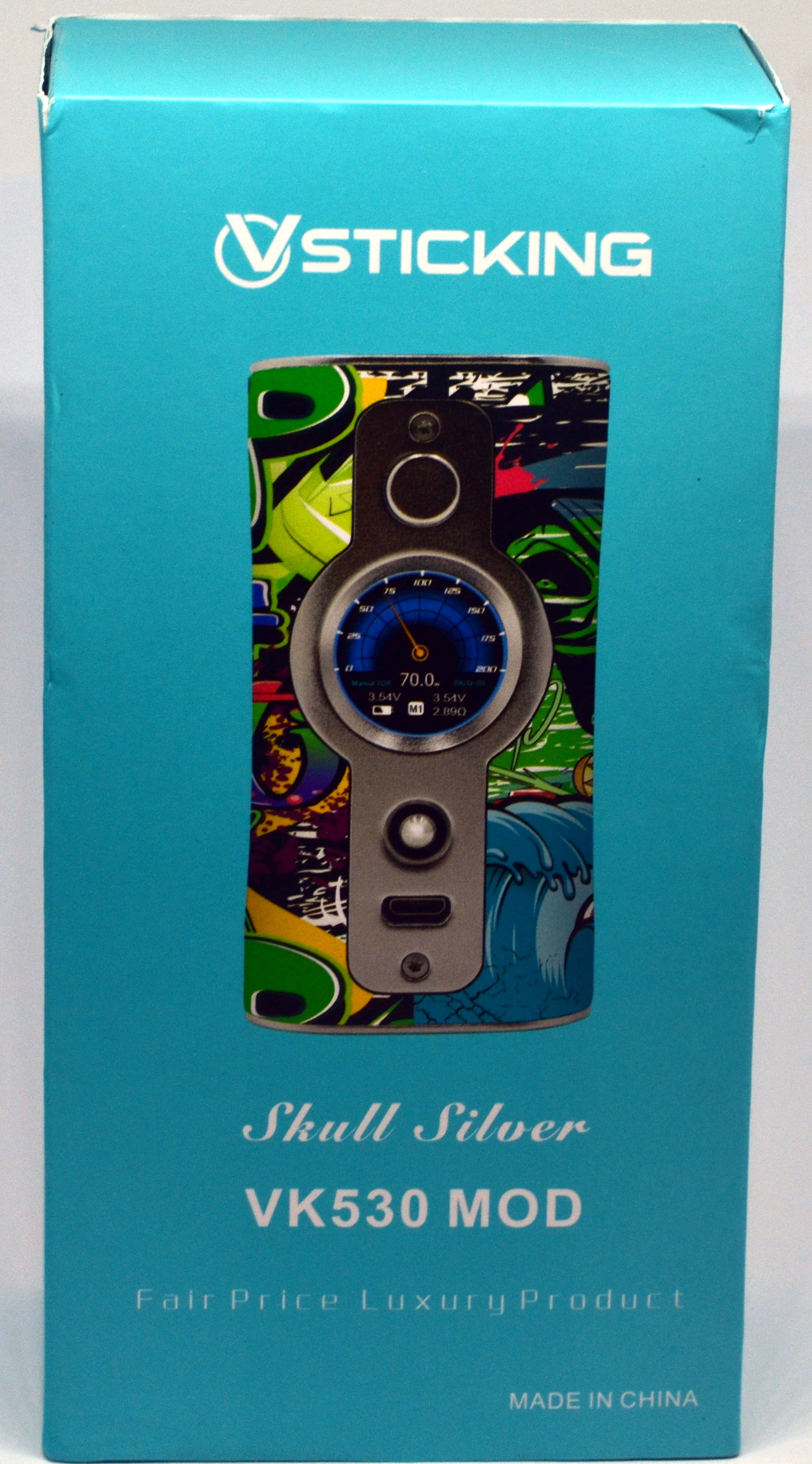 The mod arrived in a neat bluish-green box. The box sleeve had all the standard information we would expect to get, and inside the box was the mod, warranty card, user manual, USB cable, and two plastic protectors that are most likely meant to be used with the bottom battery cover. The user manual doesn’t have too much information. It gives the basic operation of the mod and that’s it. The one I got was in Chinese, French and English. 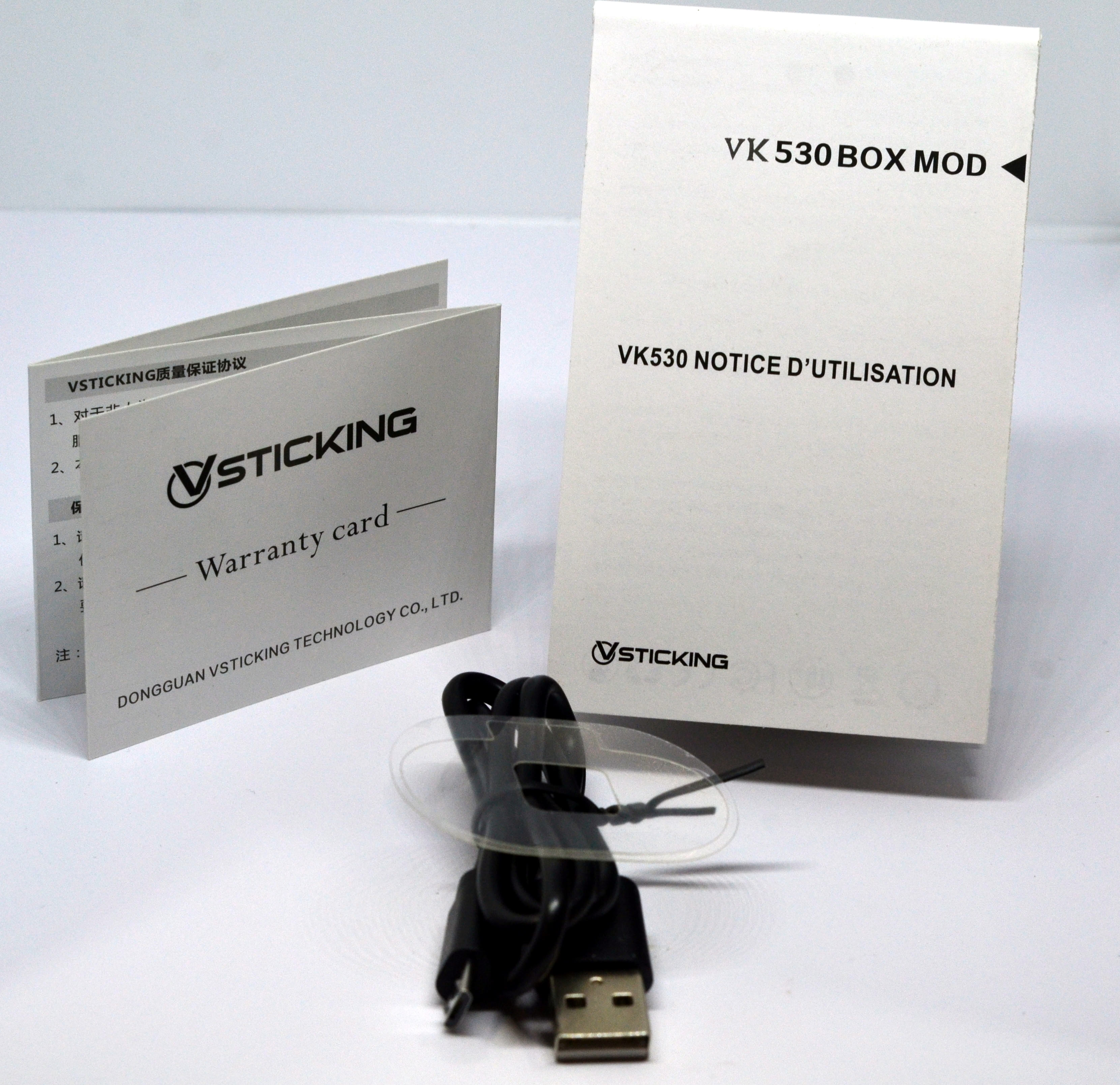 The inner box was sealed with two pieces of tape with Vsticking written on them, but that was the only indicator of authenticity. This is definitely the first con I will write down for this mod. I really like to have some kind of authenticity code to make sure the gear I purchased is authentic. 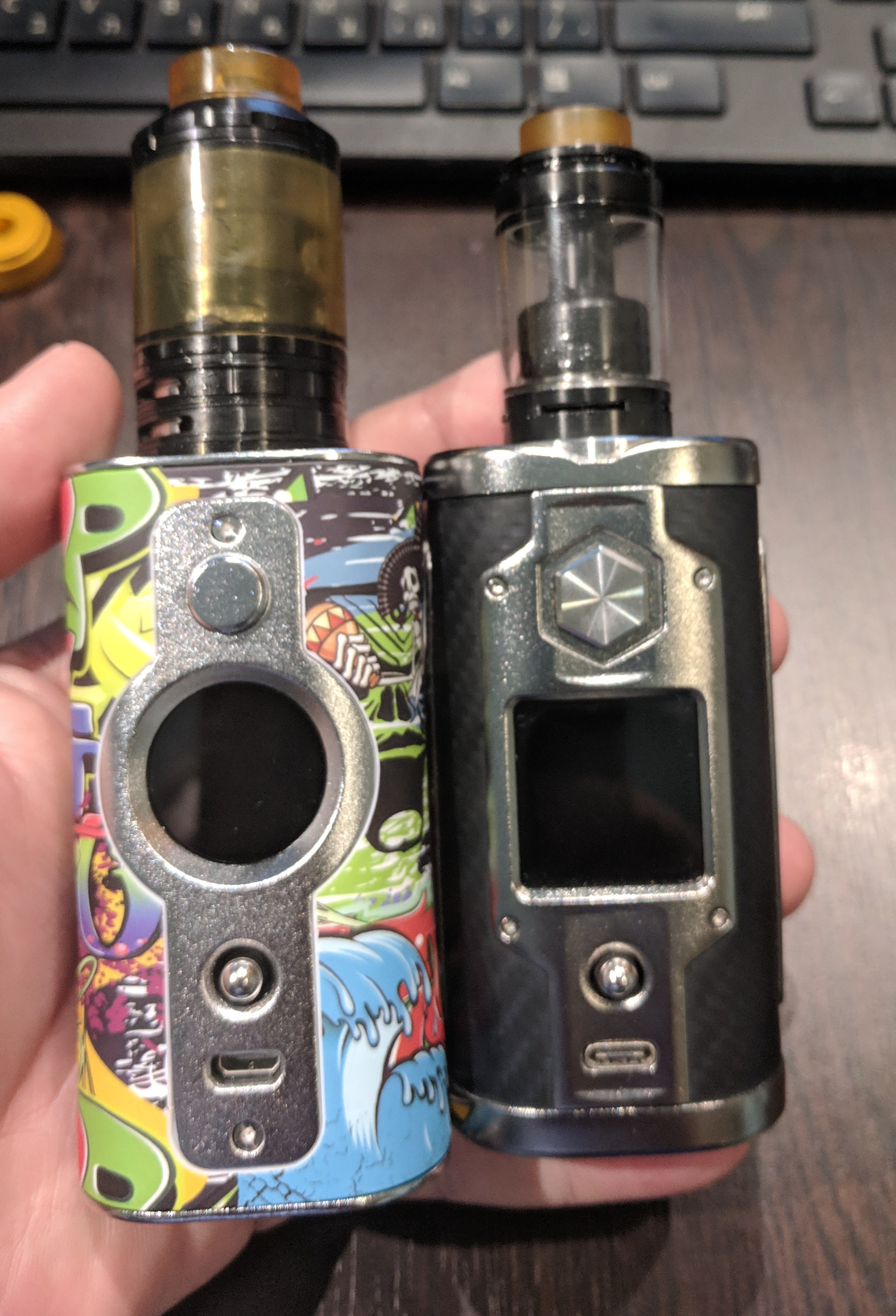 Vsticking VK530 definitely takes a lot of it’s design features from the G-class. The shape is very similar, as are the button and joystick placements. The main difference are the round screen, and the power button shape. The height of both mods is almost identical, as is the width, and the Vsticking is a bit thicker. The metal on both mods has very similar finish, and the graphic finish on VK530 feels slightly rubbery. Main difference I noticed is the weight. VK530 without batteries and tank is around 142g and the G-class is around 170g. Battery cover on both mods is almost identical, and poses the same slight hazard to your fingernails (Raise your hand if you broke a fingernail when opening one of these mods :)). 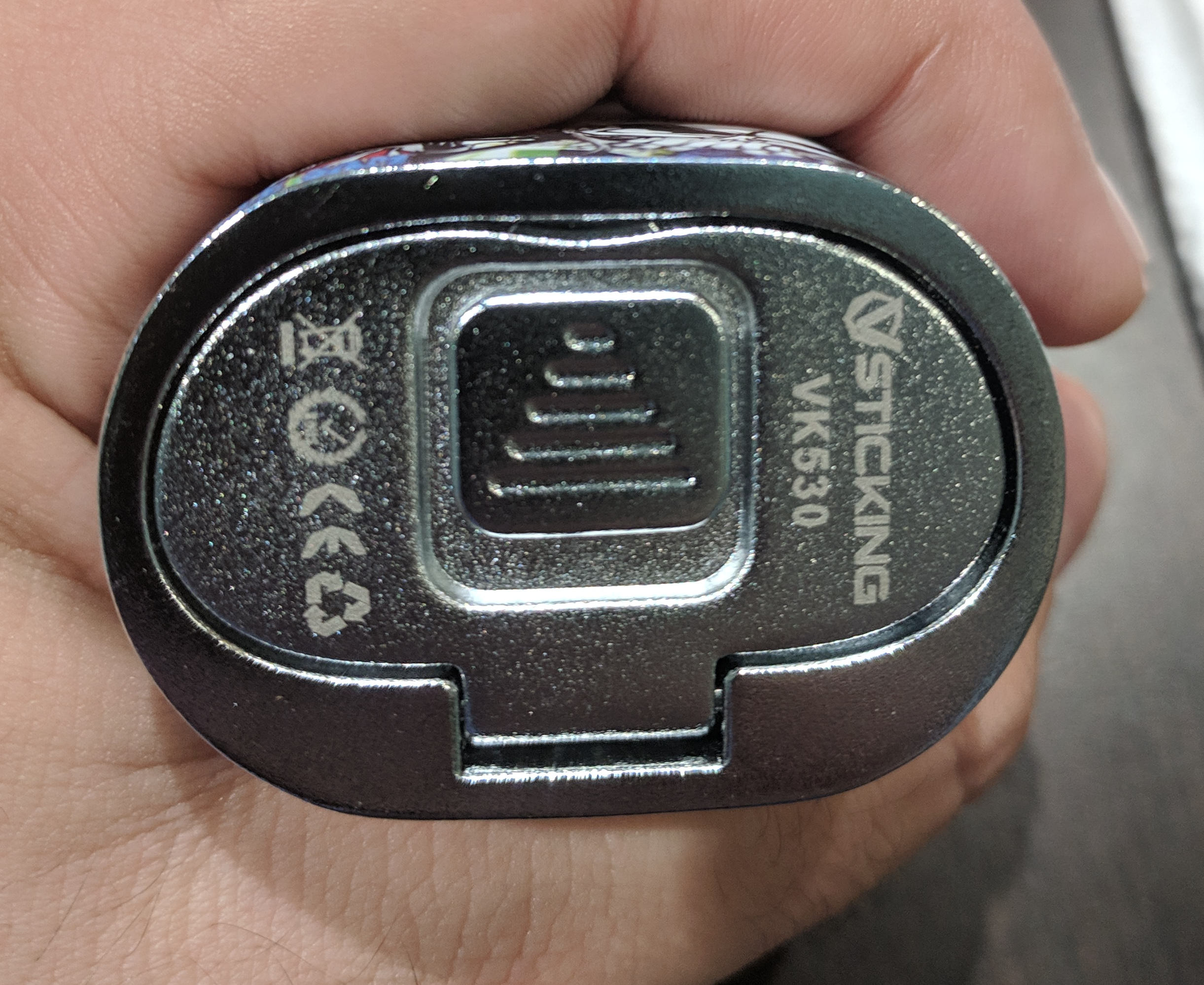 The battery cover has clear indicators for battery polarity. 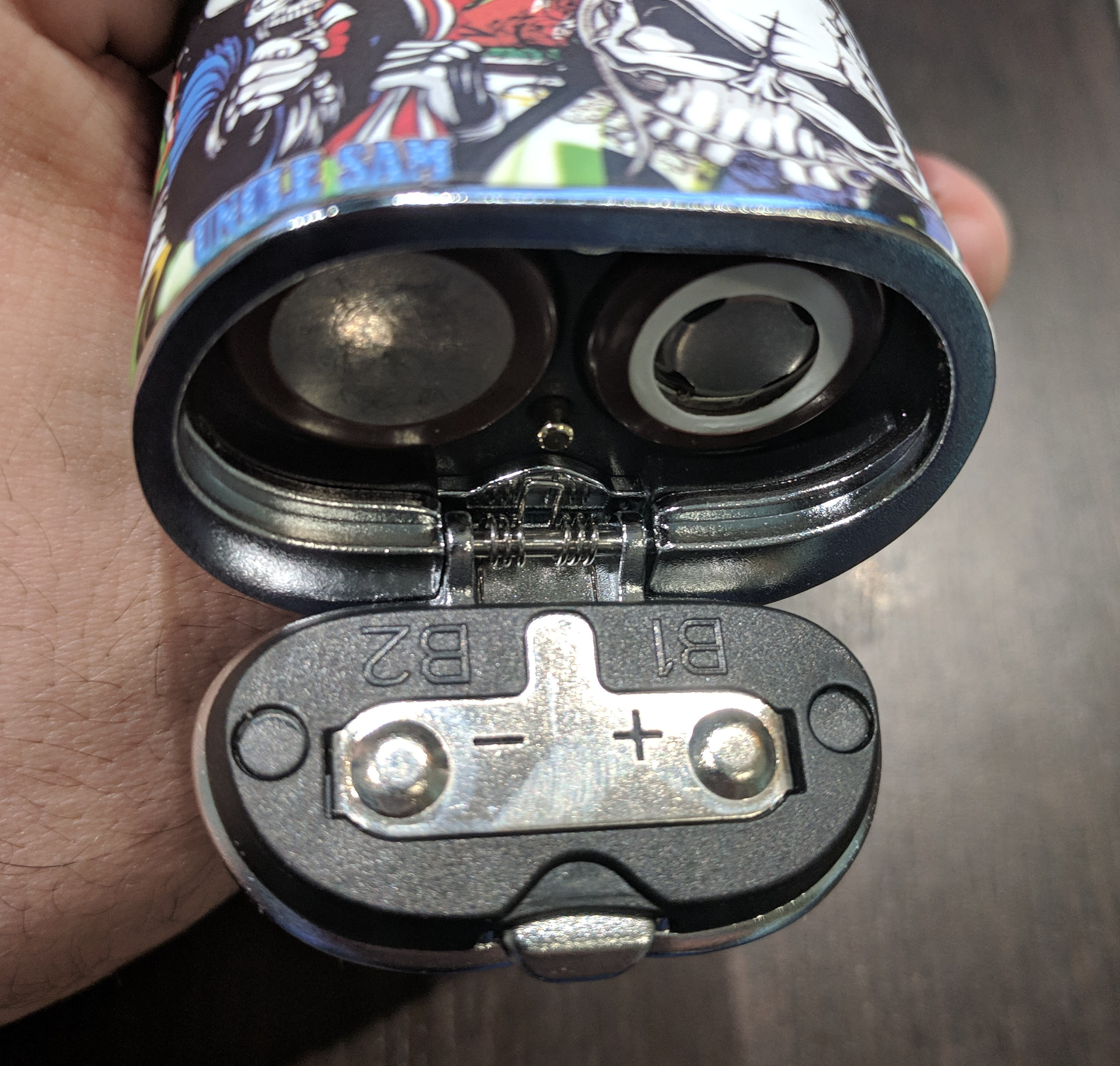 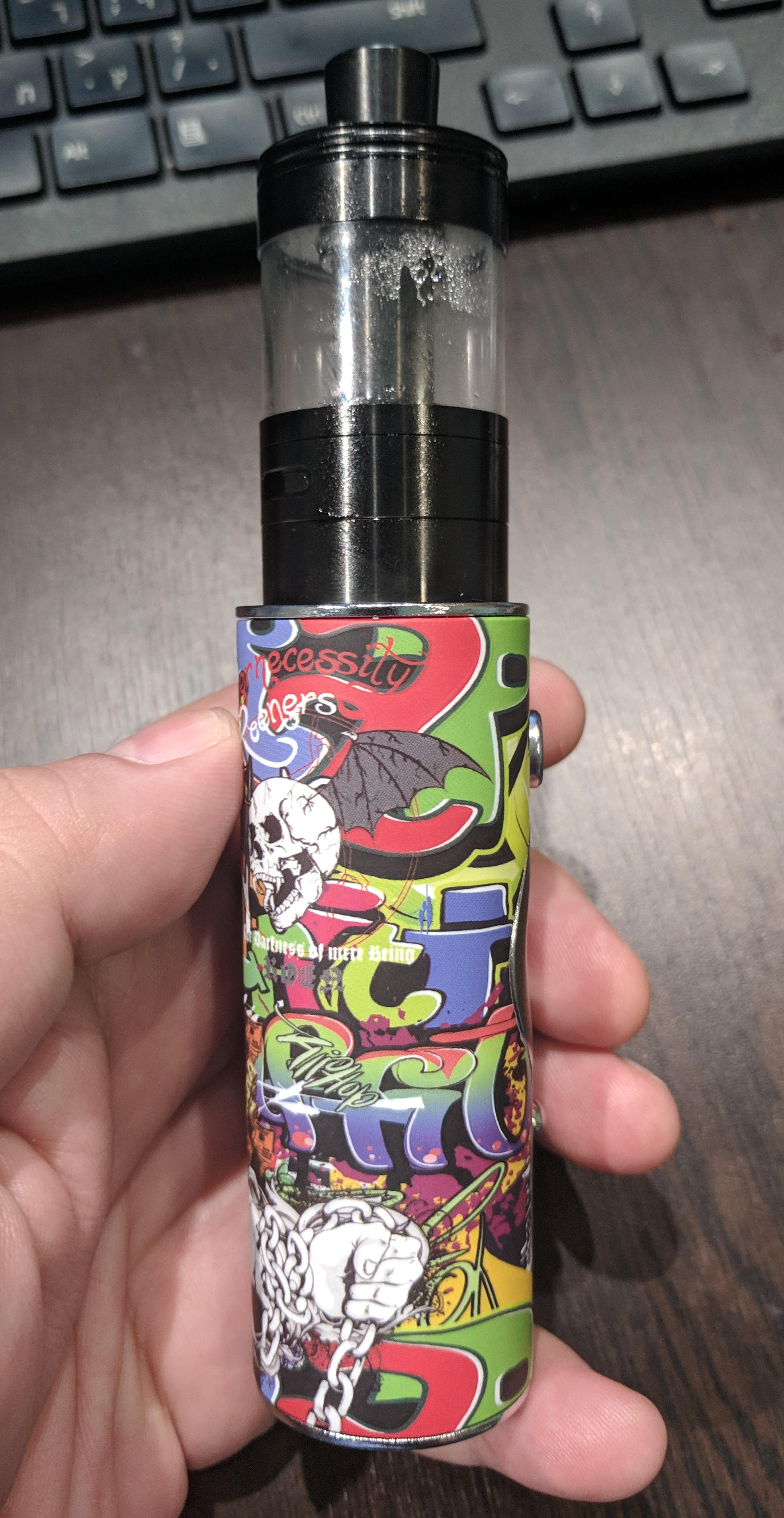 The 510 connector has a spring loaded center pin and seems to be made of solid brass. Threads are smooth and never gave me issues when attaching an atty. 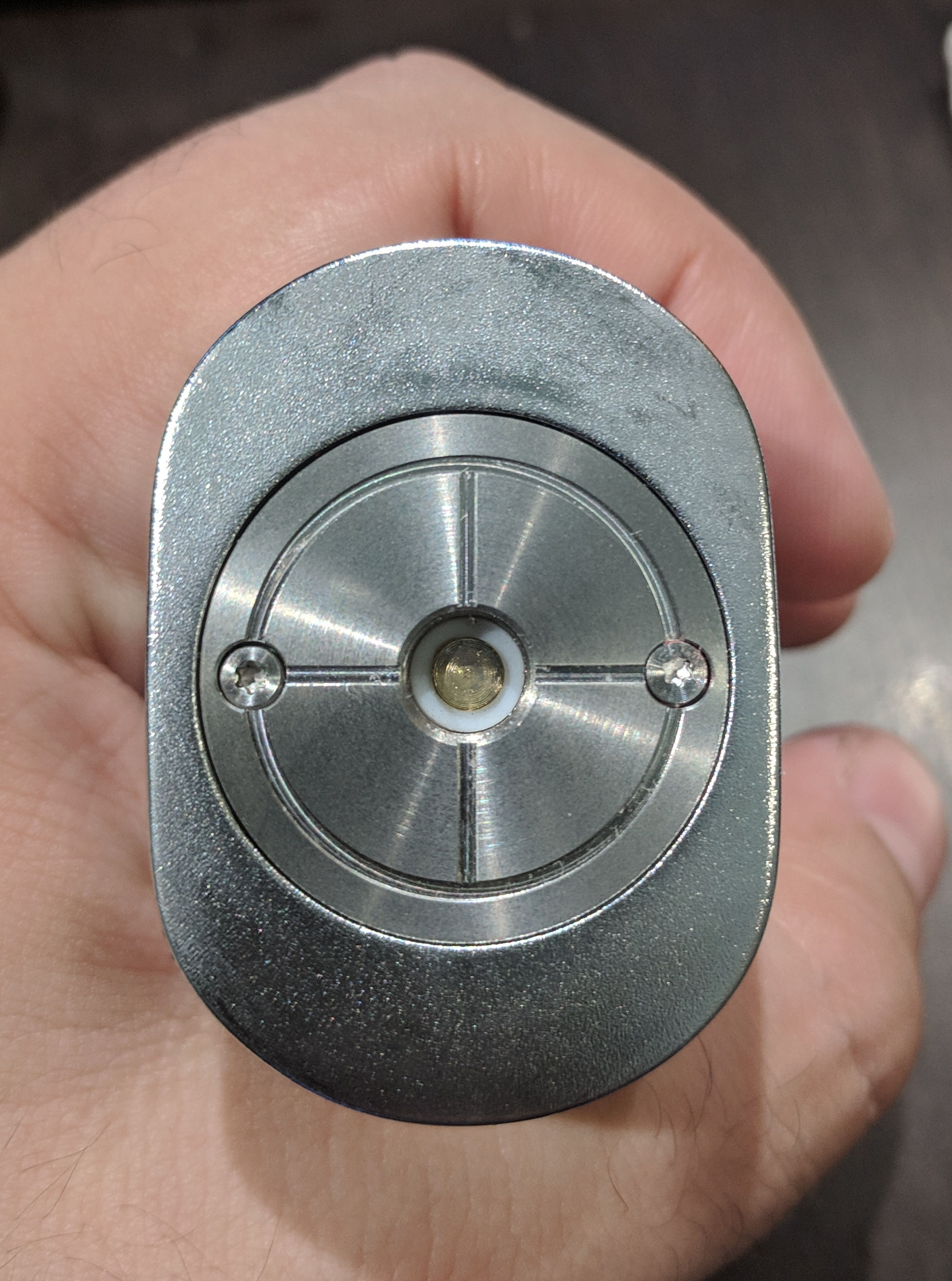 So how does it perform?
When I first powered it up I assumed that it will perform just like my other Yihi chip mods perform, and boy was I wrong (remember how assumption is the mother of all fuckups?) In wattage mode the performance is stellar. It fires fast, it delivers the power you expect it to, and if your cup of tea is wattage mode, this mod is perfect. I on the other hand like my Yihi mods for their TC capabilities. Going back to my assumption that this mod will perform just like the G-class, I set the joules to what I would set on the G-class, set the temperature to what I would set on the G-class, and the vape I got was just awful. It came in pulses that are really annoying. I literally hated the mod for about three hours before I realized that no, this is not a G-class, and perhaps I was doing something wrong. That’s when I realized that wattage, joules and temperature are three distinct modes of operation (unlike the G-class where joules and temperature are combined) and that I got the pulsing because of the pre-heat that was set to Powerful+ (something I never bothered to touch on the G-class). Once I switched the mode to Standard, I started getting smooth vape that I expected to get in the first place. Having learned what I learned, I honestly don’t feel any difference between Joules and temperature mode, and I’ve kept the mod in Joule mod ever since. One thing I have to point out is that the battery life in this mod is the worst among the three Yihi dual battery mods I have (G-class and IPV Xyanide are the other two). I didn’t do precise measurements, but it seems to give about a 100 puffs less than the other two (with the same atty installed) 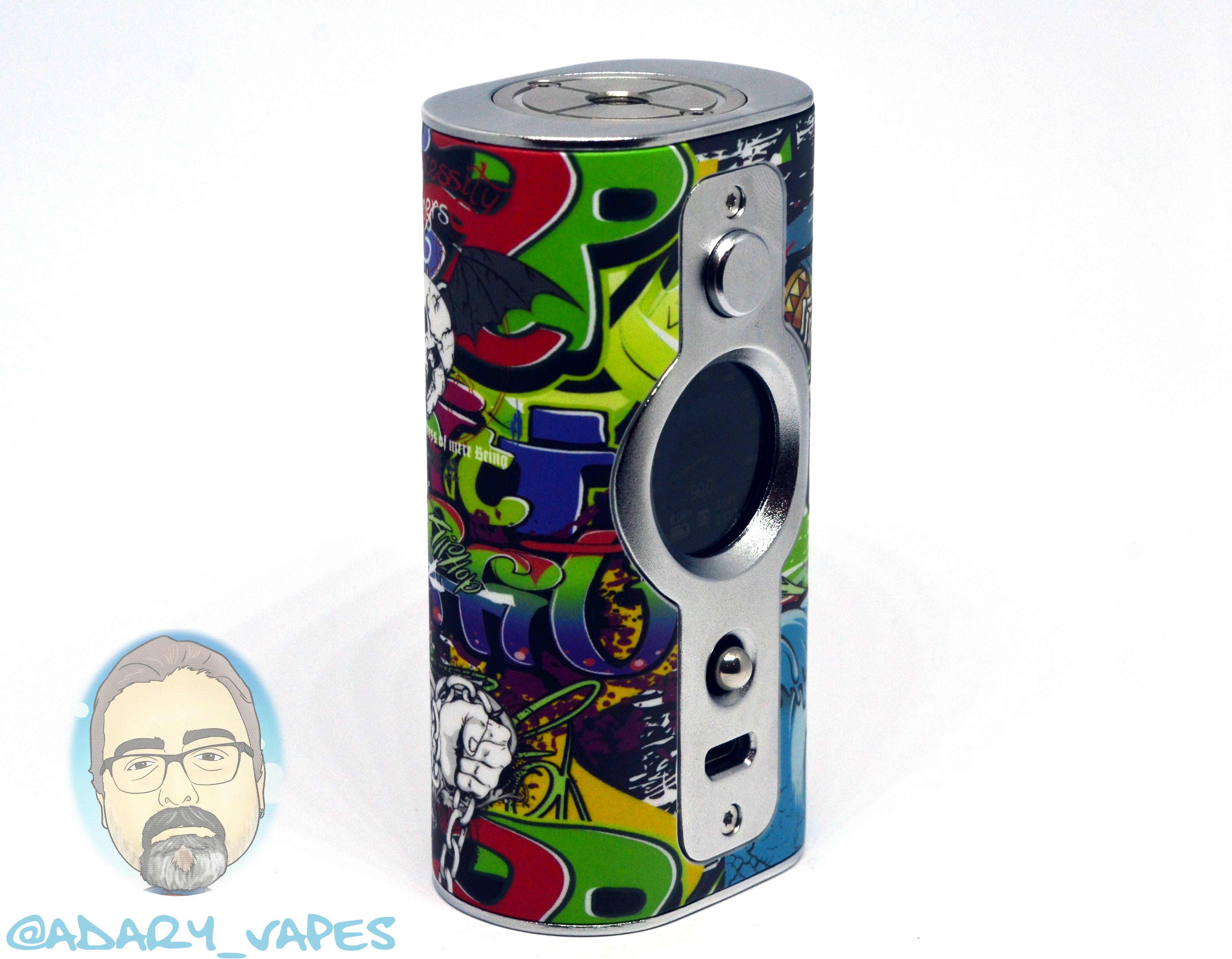 Menus?
The menu system is very similar to the standard Yihi menu system. Navigation is with the little (and slightly annoying joystick). Single click on the joystick will switch between wattage, joules and temperature mode. Moving the joystick to the right will change the preheat modes, moving it to the left will change between memory settings (M1 to M5). Long press on the joystick will re-measure the resistance of the coils. Long pull to the left will switch between ‘novice’ and ‘advanced’ modes of operation (Novice is a simplified wattage only mode). Five presses on the power button will open the system menu, while three presses on the power button will lock and unlock the device. Long pull downwards on the joystick will change the mode to bypass (with 4.2V limit). 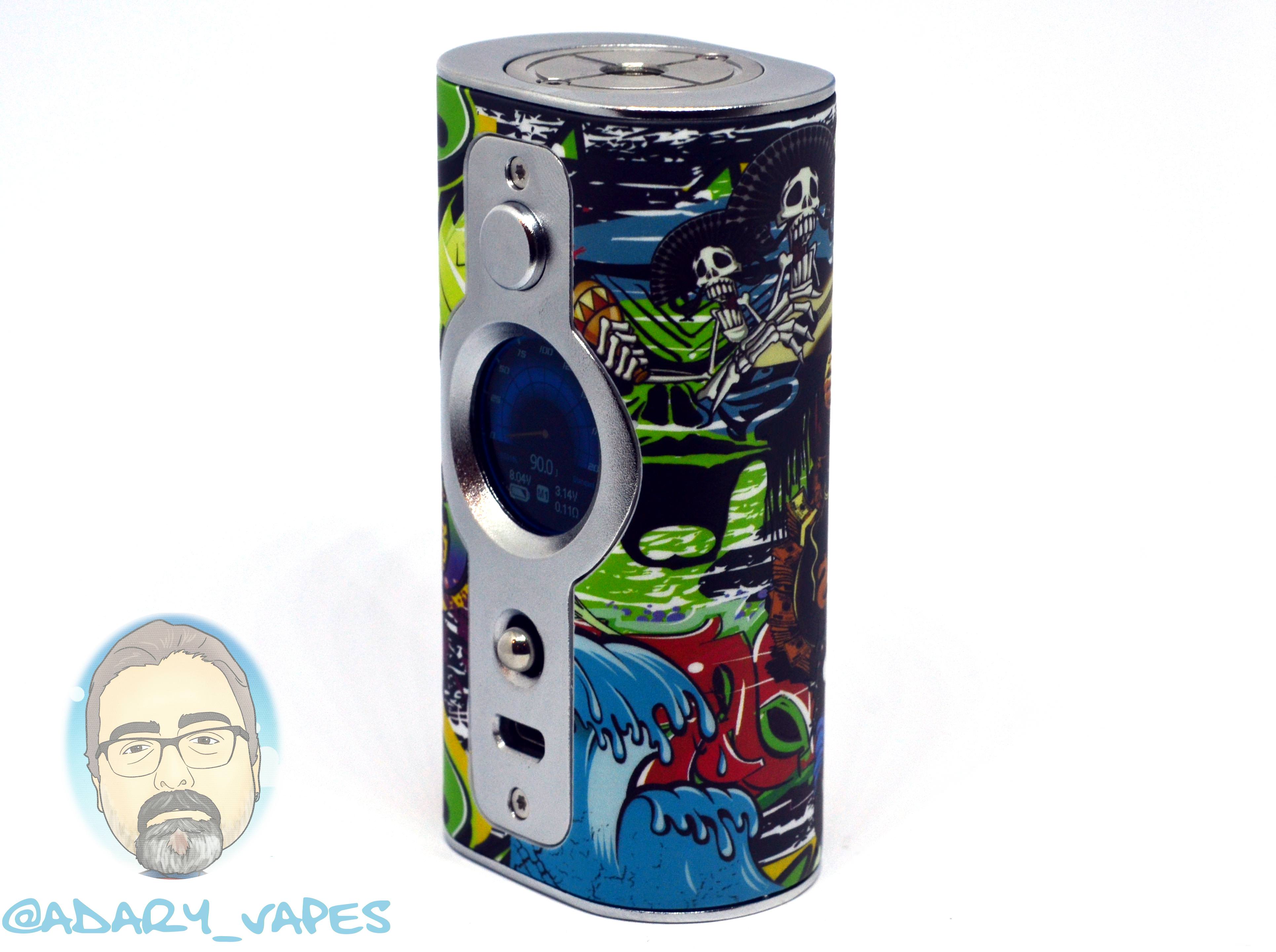 The Verdict
Overall the Vsticking VK530 is a decent mod. The build quality is not the best in the world (and I saw a few issues with power button getting stuck, and the screen being off-center) but I never had issues with mine. The performance is very good (once I learned the quirks of this specific chip), the mod looks very nice and feels very good in the hand. What I like about it the most is the current price point, which is around $60, and that is definitely a very good price for a Yihi chip mod.

Thanks you for reading. All feedback is most appreciated

Nice review. I am not a fan of “lower than average” battery life, unfortunately. I like the funky designs on it, and of course the YiHi chipset.

Nice review. I am not a fan of “lower than average” battery life, unfortunately. I like the funky designs on it, and of course the YiHi chipset.

Thanks. It’s a weird yihi but still gets the jobs done. Battery life is definitely a con but I always have some spare batteries around

Great review! Pretty much how I feel about the device. It’s quite a good performer and a great intro into yihi devices, especially at that price point. Cheers!