A message from Dr Chud, our resident advocacy specialist......you really should read this 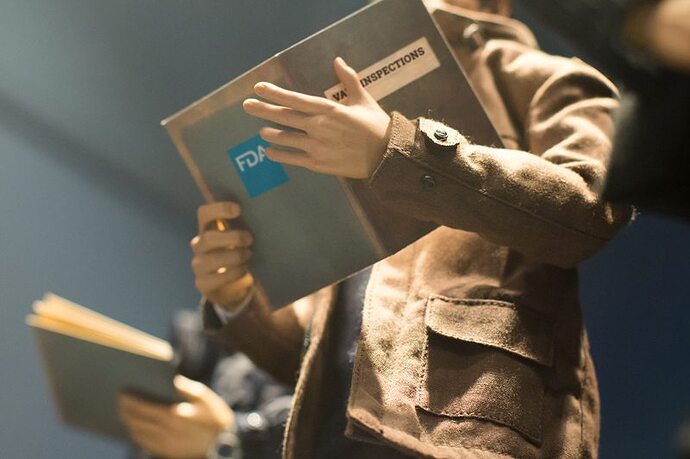 FDA is About to Crack Down on Non-Compliant Vapes

The FDA is signalling its intention to look for products that were illegally introduced to the market after the Aug. 8, 2016 freeze on new products. The FDA is calling for bids to perform inspections of vaping manufacturers, which the agency gained...

he ANPRM (Advanced Notice of Proposed Rule Making) regarding flavors just came out this morning. We are encouraging businesses and consumers to comment in a well thought, professional way as to what your journey has been. How it started, with what type of liquid and why you have been successful. TSFA will also be commenting.

Submit electronic comments in the following way:
 Federal eRulemaking Portal: https://www.regulations.gov. Follow the instructions
for submitting comments. Comments submitted electronically, including attachments,
will be posted to the docket unchanged.

He also added…
But make sure to stress how important it is for our American friends to submit their story emphasising how important flavours were to them quitting
There’s a tpd style restriction on nic coming their way in the not too distant future.

Getting a 404 error on the second link beaut?

thanks my lovely, I didn’t check it, just passing on a message, scary stuff though…he said once things have settled he will come in and have a chat about it…

Thanks for the heads up and I hope he keeps us informed. This shit makes my blood boil

Agreed on both counts.
I’m so sick of our country turning ever more towards a nanny state.

Just in case people didn’t realise how serious this is for vaping in the US. I’ll just leave this one here. The main player in this action against the FDA, the Campaign for Tobacco Free Kids, is also the loudest voice calling for a flavour ban. I don’t think I need to tell anyone where the funding for this organisation comes from. 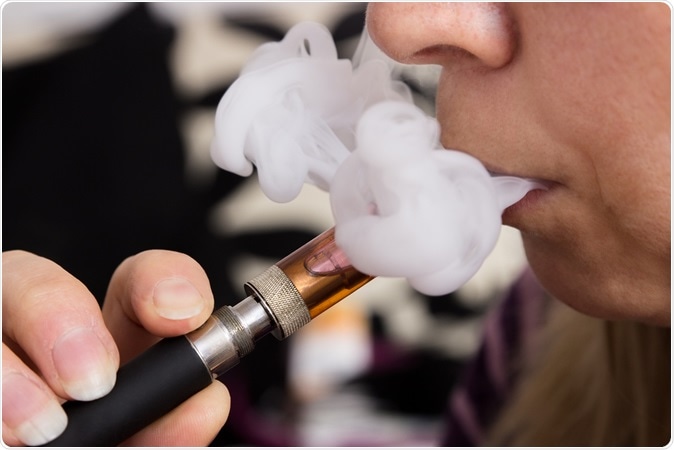 The Food and Drug Administration (FDA) has been sued by several major public health groups because of the delays on the agency’s part to implement rules regarding electronic cigarettes and cigars. The health advocates say that this delay could mean...

But never fear good people. Big pharma, with the help of the government, is on hand to save the day and offer you FDA approved vape devices and juices on prescription

. Who needs those pesky vape shops with all those confusing options they offer.

FDA Commissioner Scott Gottlieb says over-the-counter status would give the agency many more tools to look at the safety and benefits of e-cigarettes.

I know it’s been said many times, but it is nonetheless still quite true. The only impetus of any kind to regulate this industry is driven purely by money. Doing it under the guise of public safety, yet that is complete horse pellets. It is money, money, money. They do not give Damn One about the ‘health and well being’ of the public. That’s obvious in countless situations outside of vaping. Gawd I hate them.

Why don’t they regulate cigarettes to over-the-counter status then? Yeah, exactly. 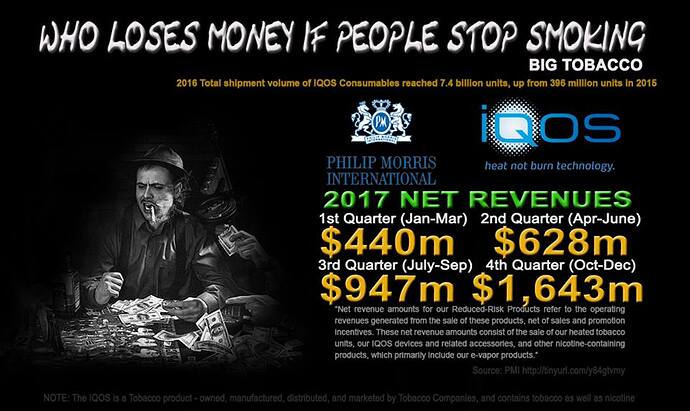 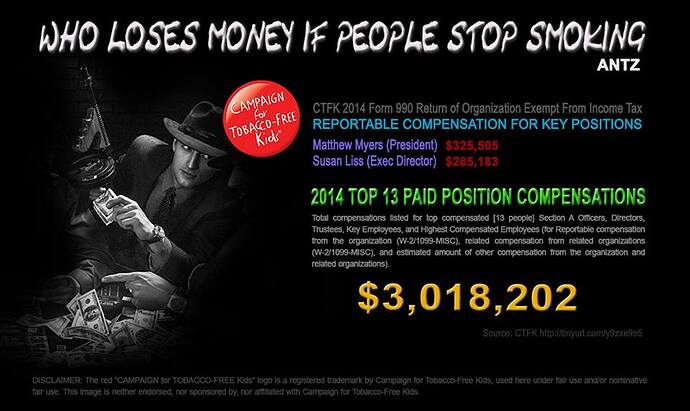 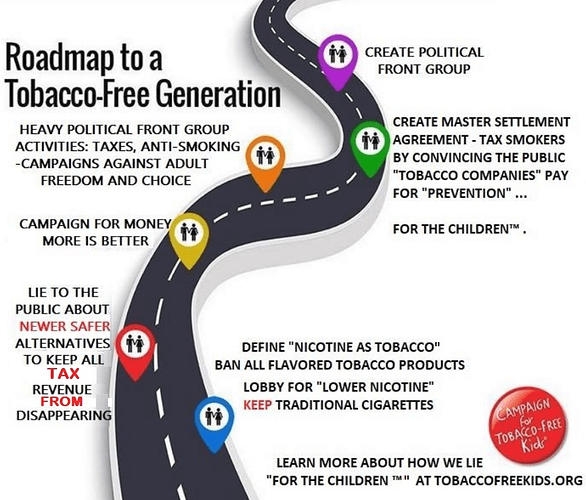 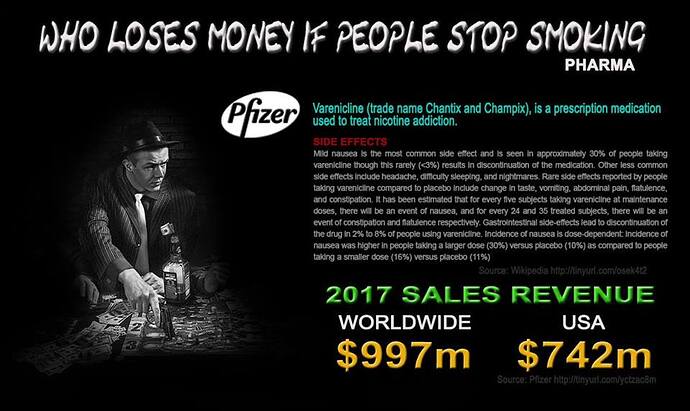 Why can’t people just comprehend that stuff and let the thieving bastards know we won’t tolerate it? I just don’t think the vaping community is powerful enough alone (obviously), and the Big Whatevers certainly know it. What a shame. If people only understood that these actions are having a negative effect on public health and well being…

And again, nothing new here, but I don’t think they want to kill vaping. I think they want to own it themselves. Regulate it into the hands of the Big Assholes so they can hoard all the money and dictate where it fits in to their bottom lines.

What disturbs me the most is that people agree with regulating labeling under these pretenses. The United States is 40% obese. How about regulating the poisonous crap masquerading as food and spoon fed to kids, and adults, which leads to far greater problems that nicotine ever will.

Big Pharma obviously loves Big Food. They also help tremendously with their bottom line. All the medications related to obesity net them a healthy profit (pun intended), right alongside the smoker’s afflictions’ treatments. Look even at TLC and Dr. Nowzaradan, 600lb Life. They are making a ton (pun intended) of money off obesity. Opportunists will never cease being opportunists. Sheeple will never cease being sheeple.

And while I think 90% of people would like to think they are ‘doing the right thing’ by supporting obvious money and power grabs, sadly you are right in their sheep mentality and will not bother to educate themselves properly enough to wise up to the scam behind the movement. They will sleep well at night knowing they “support causes that protect kids”. This is the same mentality that believes humans are about to pop the planet. Again, outside the purview of this thread. Even with contrary data, people still believe we’re hurtling directly into the sun. And they think we can pay our way out of our impending doom.

As trite as this may sound, “He who holds the gold, makes the rules”. and unfortunately we will not escape that little fact.

@anon96069639 @anon96380778 I don’t think I would have the time nor this thread have the space to go into the psychology and motives behind what’s going on at the minute, but for right now a good start would be to add your comments to the ANPRM. Keep it concise and too the point, all they want to know about is how important flavours were to you quitting smoking. They don’t want or need to know anything else. I’ve filled it out and I’m Irish, the outcome won’t even affect me. When it comes to advocacy, you don’t need to do everything but you do need to do something.

There’s a new survey about to be released that could be very important in addressing the really low numbers in the commenting period so far. It’s designed by Dr Farsalinos and uses FDA software so it will be admissible as part of the comment period. When completed it will be analysed by his team and submitted as a paper for peer review, it will then be published in various scientific journals. They will need at least 30000 people to take part and it will be for US residents only, the survey is detailed and should take around 20 minutes to complete. I have more details and a slide show from Dr F if anyone wants to know more. US vapers need to get people on board with this and pass it on to any vendors you deal with.

Dr Konstantinos Farsalinos Announcement for the flavors survey
Dear US vapers,
Sorry for the delay in launching the flavors survey. As you may know, we are using an FDA compliant software for surveys, which is of vital importance for the FDA to accept the results of the study. The questionnaire has already been uploaded, but the software company needs to validate the survey. Additionally, we want to make a final check on the question logic so that we avoid any mistakes that would create problems in the analysis. We think that the survey will be online and ready for recruitment today. We will keep you updated. Of crucial importance, we need absolute honesty in your responses so that we have realistic and representative results.
Best regards to all vapers in the US.