Took the kids to Cahokia Mounds today. Actually it was the first time I’ve been there myself, and I’ve lived here all my life. It’s just a few miles out of downtown St. Louis, you can actually see the city skyline from the top of the tallest mound. Fascinating place. As described on the website…

The remains of the most sophisticated prehistoric native civilization north of Mexico are preserved at Cahokia Mounds State Historic Site. Within the 2,200-acre tract, located a few miles west of Collinsville, Illinois, lie the archaeological remnants of the central section of the ancient settlement that is today known as Cahokia.

This long gone (without a trace) ancient civilization built vast mounds for burial and other things yet unknown. It would be a more popular place to visit, but well, it’s a bunch of earthen mounds. All the treasures of the place are under the ground in the mounds.

You can, however, freely walk the entire 2,200 acre grounds and explore the mounds. And they have put steps on the massive 100’ tall Monks Mound that you can climb. Holy crap, I will feel that in the morning. Had a great time and learned a little too!

Here’s a picture of the big mound as seen from the event plaza, and the view of St. Louis you get from the top of it (zoomed a little on my phone). If you’re ever in the area, stop in! 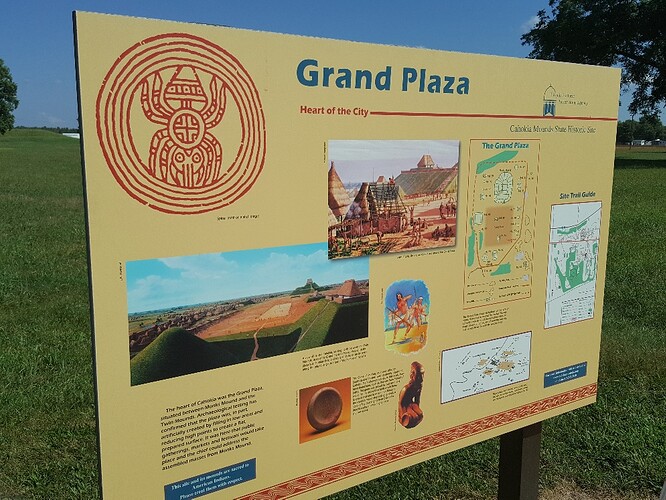 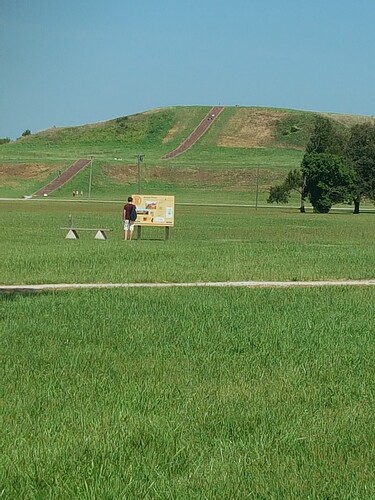 And for my English friends,

One of the greatest cities of the world, Cahokia was larger than London was in AD 1250.

One of the greatest cities of the world, Cahokia was larger than London was in AD 1250.

Nice view you have there man.

Alongside the mayans this looks like something I need to read more about, very interesting, thanks for sharing

Alongside the mayans this looks like something I need to read more about, very interesting

I’ve long been fascinated with ancient civilizations, largely because they had some highly technical math and building skills, massive empires, yet they’ve basically all simply vanished. I know most people think of North American “Indians” as face-painted, horse riding, tee-pee living, bow and arrow shooting simple types (think Tonto) but in the Cahokia case, it’s simply not true. The fact that these are earthen mounds and not famous stone structures keeps them off the radar largely, but this is a fascinating and mysterious people, and in my own back yard.

I’ve mentioned that I watch Ancient Aliens on the History channel before, and this is why. That show naturally tries to tie all the technology and mystery into proof on alien encounters, of course, but aside from the occasional far-stretched conclusions they jump to, they do raise a lot of thought provoking ideas. With Cahokia, for example, how do you built an enormous empire (that existed at the same time as London and was larger even), build these huge mounds that are still largely not understood or even discovered fully, but keep no records of your civilization and vanish without a trace? Odd!!

Awesome post!! I believe we have those mounds here in Michigan as well. Thanks for sharing!!

Ancient aliens is a fantastic show, so many questions unanswered, I wonder if technology was found and quickly removed at some of the major sites to cover up the fact of lost knowledge, after all, simplicity is key and they were the masters of simplicity in terms of ingenuity.

They also had impressive man power, the mayans for example, they are now finding out that the mayans were in their millions, due to new structures being found under large forests using radar penetration.

Yup, they sure are. We call them El-Trashmores. Mounds of Smok and Wismec mods covered with dirt that we use for ski slopes in the winter.

Oh ya, and I can confirm that they were built by aliens. I met three of them. Andelay, Areba, and Yehaa. Pretty cool dudes. They helped me read the safety instructions on one of my mods.

I think your Uncle was on to something. I just watched a show on the collapse of the mayans. It’s sounds like, towards the end, they were doing a lot of sacrifices to the gods to bring rain. Cause of all the trees that was harvested, brought drought. So they had no food crops to feed the people, Which in return lead to the end of their civilization. Very similar thing happened to Easter Island as well. I’d really love to take a trip to Mexico to see all the Mayan ruins. Interesting for sure!

That’s right, they recently discovered mass graves that they believe were the remains of the mass sacrifices.

It’s sounds like, towards the end, they were doing a lot of sacrifices to the gods to bring rain.

Sounds a bit like what’s happening now, only we don’t call it sacrifice but war and it’s to bring oil.