Left is my Plus v2, right is my Supreme v3. Excuse the shit pic quality. I spent ages trying to get a decent close up of them and this was the best (but still shit) I could get. 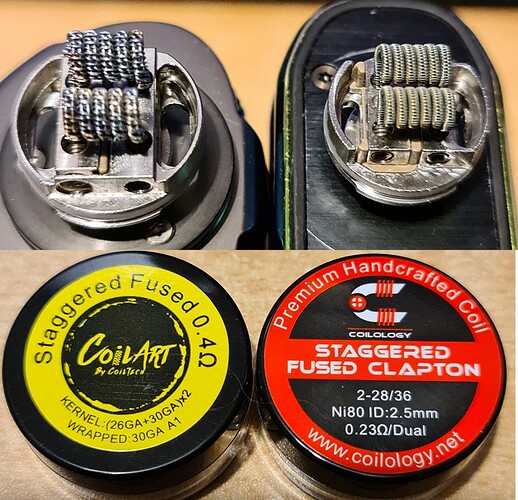 Nothing wrong with those pictures mate, nice and tidy builds too. Considering both builds are using Staggered Clapton coils (putting ohms, gauge and ID aside) there is quite a difference in appearance between them with the build on the right looking more refined so to speak.

They are very different indeed. One says staggered fused clapton and the other says only staggered clapton on the label so I’m not sure if they didn’t put the whole name on there of they are actually different types with or without the ‘fused’ bit. I’m not experienced enough to know this much about wires yet but I’m swiftly learning!
Also the left coils are kanthal and the right ones are ni80 but I don’t suppose that would make that much difference to the appearance?

Yes I noticed the one on the left just says Staggered Fused whilst the right one says Staggered Fused Clapton, it was the irregularities that caught my eye in the way the wire was actually made on the left side compared to how much tighter and more refined the one the right hand side looks. Obviously the right side has a slightly smaller ID and the wire used is of a smaller gauge but it’s more than that. Maybe it’s because the Coilology are hand made whilst the other one isn’t, they still look good though and I hope you enjoy them.

You are quite correct Detective Holden! Well spotted! The Coil Art ones on the left are 3mm ID and the Coilology ones on the right are 2.5mm ID. I’ve no idea if the Coil Art ones are hand made or not, it doesn’t say in their description on the site I bought them from, but I’d assume they are judging by the complexity of them.
I’m sure I will enjoy them, thanks Jimmy. They chuck out silly amounts of flavour!

I’ve no idea if the Coil Art ones are hand made or not,

that’s a first. I don’t think the Coil Art ones are handmade but I may be wrong. I mostly buy Coilology coils or Wotofo but they are both pretty good for premade coils.

The coilology ones yes. I was referring to the coil art ones.
I only bought pre-made coils as I’ve wanted to try the staggered fused claptons since I first saw them and finding a reel of that type of wire in the uk is mission impossible atm.
I did find some on amazon yesterday though. I’ve got a 10ft reel of SS Staggered fused clapton and a 10ft reel of ni80 alien both on their way. Then the fun will really start when I build my own huge coils for the titan!

I saw my mistake and corrected it but you obviously spotted it first lol.
Glad to hear that you found some more wire to add to your collection, you probably already know that Stainless Steel has a a slightly lower resistance than Ni80 and then Kanthal comes up bit higher than both, Stainless Steel ohms can fluctuate slightly when heated and cooled which is normal. Anything you are not sure of just give us a shout and someone will help you out, I’m not much further advanced than you are but you seem to be taking to it like a duck to water.
On that note I have just noticed the bloody time so I’m off up the wooden hill to bed. Goodnight mate.

Indeed mate, I’m right behind you!

Looking forward to trying SS for the first time. I’ve read it has lower resistance as you said, so faster ramp up time, but also better flavour but as we all know, that is subjective.

Do the Coil Art come out at 0.4ohm (0.2ohm for dual build), they sure look like juggernaut coils to me?

I’m running 2 of them so they ended up at .18ohm. I have 2 reels of juggernaut here and it isn’t the same as that. You can see it more clearly in the image here. You can zoom in and out with your mouse wheel for a better view.

It looks like some sort of braided wire in the pic.

yeah, not staggered fused claptons, not as I know them not wound tight enough! The Coilology ones look great though!

Haha yeah they do, that’s why I bought them!

Trying to identify what those others are isn’t easy these days there are so many different kinds of braided coils, could be Hive but just guessing!

Not had any hive yet so I don’t know what that looks like. Looks to me like there just 2 main thick wires in the core with the staggered thinner one wrapped around them. Whatever they are, they do indeed look good and they chuck out some epic flavour!

I got a tub of these and these too but not tried either yet.

Braided coils do as long as you brace yourself for some friendly fire, they can be lively just if they are staggered fused claptons they are poorly wound but others might know the general quality of Coil Art coils!

Had zero spit back from them so far. They vape very smoothly.

There are a ton of different Coil Art types available there. I don’t see any Staggered fused claptons though. The Half staggered ones I linked above are the closest I can see to that.