I reckon that once the generator arrives it shouldn’t be too hard to figure out a suitable method of suspending the Dremel, I just need to have all the kit in hand to figure it out.
I would also like to be able to have a drop in and lift out by hand arrangement, rather than lifting and lowering with a lever.
If none of this works, I will just fabricate a stand as has been suggested.
Thanks so much for all the input though guys it really is appreciated.

Even though there is only 2 inches of travel, the height can be adjusted.I’m thinking we can make it work. Meanwhile asap I will come up with something for the drop in-lift up method. The handle on the Kinematica shown above is always in my way. But I don’t use the thing anyway. Way too big.

Yes, the travel of the handle mechanism is only 2" but there is still the shaft travel so it could be done.
As you mentioned before it would be better with a drop in arrangement.

That drop-in arrangement is exactly what I had to modify mine to do. It’s actually better for me because I don’t have to hold the handle down for the duration of the homogenization. It’s an annoyance to set a thumbscrew every time it needs to rest at max height, but it works.

I have to agree with you @Pennywise that would be a pain to me too. 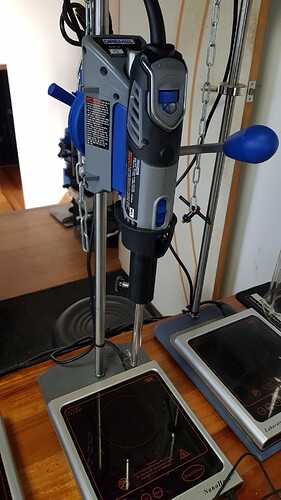 Just to toss another option into the ring…

I much prefer the assembly line/jeweler’s bench approach with respect to this particular situation.

I think it would be far easier (and maybe cheaper) to use a hanger with a retraction mechanism (of whatever preference).

I was originally picturing a (stiffer) spring-supported type system, but haven’t yet found a picture example. What I did find may or may not be suitable, but at least it conveys the idea.

Rather than a press, I would prefer a stand (that’s ‘permanently’ close at hand, with an arm at the top, which can be swiveled (into position as needed, and then back into an out of the way ‘resting’ position): 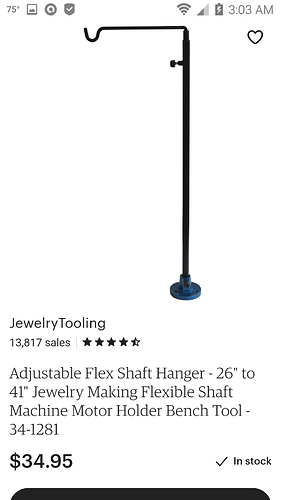 Attached to the upper arm is where the options come to play. If you use the following, then there’s no spring involved (at least of the type I’m trying to describe): 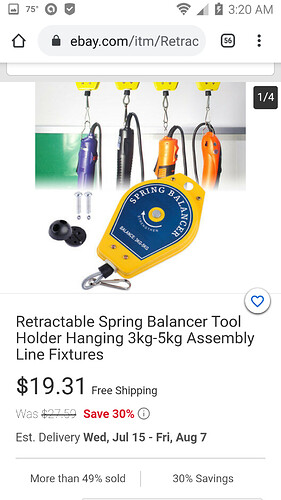 I would want a non-latching mechanism on the above type of device (I’m not sure if the one above does or does not latch). Meaning I wouldn’t want to be bothered extending it down into position, and then clicking on a release button of whatever sort, to have it retract every time you pull it down to use it. (That would get old quickly.)

The other would be where the Dremel itself is supported by a spring (using the clip on the Dremel on the end of the spring), and has enough travel (give) to lower it into position, and then returns to its resting position upon release.
(I’m pretty sure I’ve seen similar apparatus in dentists offices in years gone by, and I know I’ve seen it on jeweler’s benchs. But whether or not they’re still available new, I don’t know.)

There is a similar hanger on the Dremel workstation they have but the way Simon mounted looks good to me.

Yes Simon’s method could well be the answer, however as you say the Dremel stand does have a hook arrangement on the top of the main shaft.
@Sprkslfly is thinking more along the lines of a retractable style I think.

@Sprkslfly were you thinking about a retractable type of arrangement? and if so would it be that you would have to hold onto the Dremel while it is doing it’s thing?

were you thinking about a retractable type of arrangement?

if so would it be that you would have to hold onto the Dremel while it is doing it’s thing?

Correct again!
Given how fast it works…it’s really not a big deal to hold it in place (with a slight downward pressure) for a minute or so.

But then, that’s assuming that the amount of tension can be adjusted (or if not, found something within a range that doesn’t add to the task obviously chuckles)

For myself, it’s more about having it immediately accessible, but without being in the way when not in use. And given the footprint that most presses eat up… I just like the “minimalist” amount of space that the hanging rod type setup provides. Most presses are a 6"x8" footprint minimum. And workspace is at a premium for me.

(Downsizing a house full to basically a single BR is no joke!)

At the end of the day that arrangement sounds like a good option.
I think that even just a hanging bracket, not even retractable, where you can just take the Dremel off the hook, do your thing, and then put it back on the hook would work fine.
As you say as it is for such a short duration would it matter having to hold the Dremel in your hand.

I don’t have a problem holding with my hand, I would probably need to plug it on a switch I could turn off with my foot.

Normally I use my generators by hand and most in this size category are used that way. It can get tiresome holding one though as others said its not bad. What I did was cut an aluminum round 2 inches in diameter x 5/8 thick with a .500 inch hole in the center. This is the OD of the stator tube.

It was drilled and tapped for a 5/16 x 18 thread and attached to a .500 rod shown on the right. This slides in and locks with a thumbscrew as shown.

IMO nothing beats this drop-in lift-out setup. A locking collar can be placed under the cross support where you can swing everything out of your way and return to your preset height. This stand is 9 x 12 with a 20" high post.

This is very stable

I checked Amazon and eBay and lab stands and clamps are pretty cheap and then some are crazy expensive. If I know the rod and thread size I can machine a “round” like above pretty cheaply and quickly. Just let me know. There are lots of styles of lab clamps.

. That handle is genius I can have this going in no time, actually I already have it put together. Your instructions with pictures were perfect.
Now to go to mix room and set up a hook until I have a more permanent solution. ,
Thank you @Guitarded for all you are doing. This is going to be a Game Changer for me. You have no idea.

I will report back soon.

That’s very cool!!! Let us know how it goes!

That’s cool, didn’t know the tacklife came with a side handle like that. Have fun with the Game Changer

It didn’t come with the handle, it was sent by @Guitarded to make it a bit easier for me.